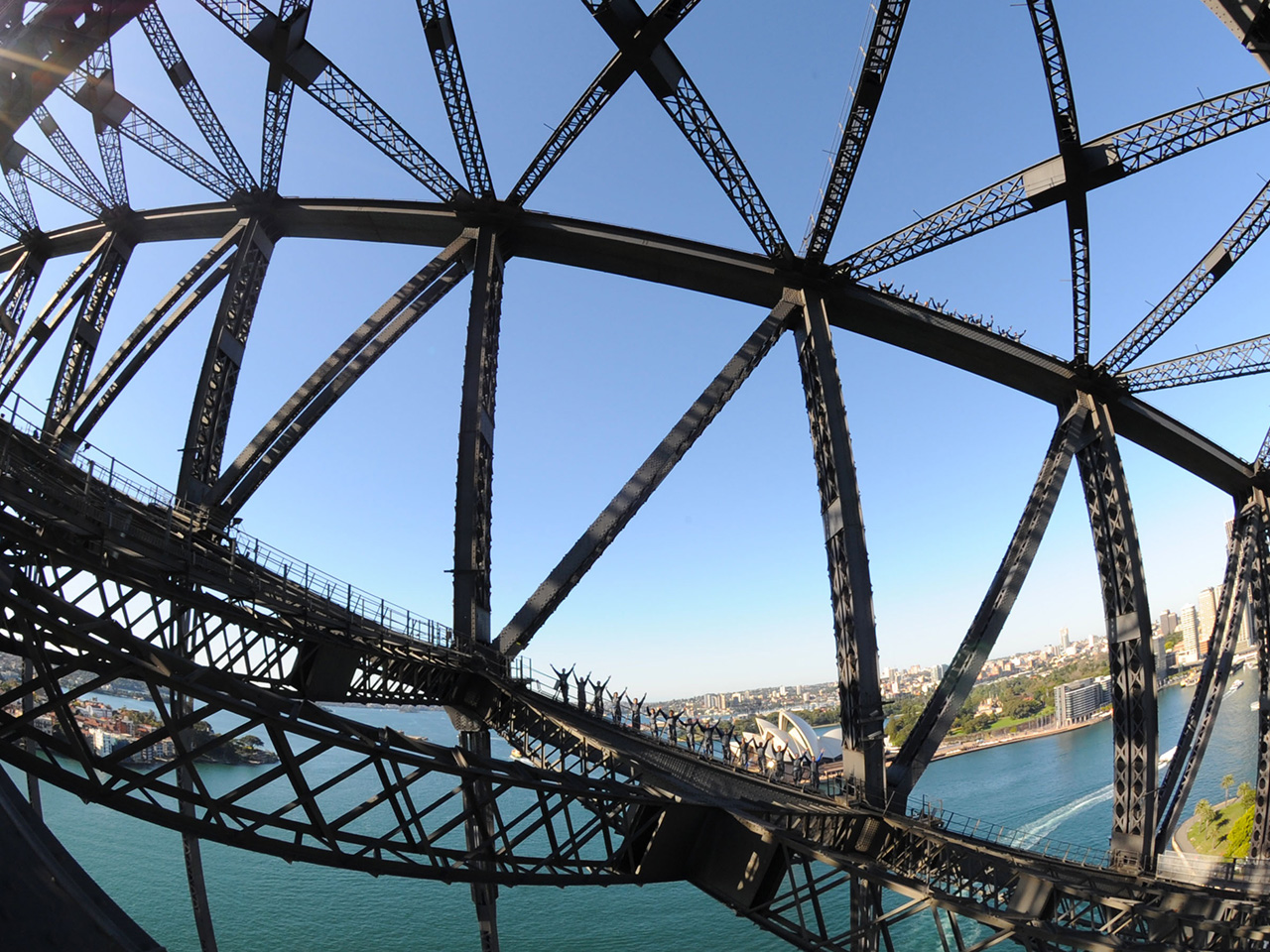 From shark dives to tasting tours, here’s a few of Expedia’s most popular Sydney activities.

Before you’ve even donned your climbing suit, you get a dose of history at BridgeClimb Sydney. Check in at the visitor centre takes place inside a building that’s part of the ramp leading up to the Bridge. The warehouse space was once a chocolate factory but these days the walls are covered with photos of celebrities who’ve made it to the top. Everyone from Orpah, Bill Clinton and Prince Harry to the entire cast of Modern Family and Daniel Radcliff, aka Harry Potter have tackled the climb. Each and every one of them is beaming because there is nothing quite like climbing the Sydney Harbour Bridge.

In the 16 years the tour has been operating, more than 3 million people have made the climb. Thousands of proposals, even a few weddings, have taken place on the iron arches.

On the bright sunny day, Sydney is at her best. The water sparkles, the bright white of cruise ships reflecting off the waves, people are running, walking, bike riding and driving. There’s activity everywhere but as soon as you walk through the original foundations to the very base of the bridge’s supports, there’s no one around. Just a bunch of us; tourists, locals, backpackers, businessmen, zipped into our grey BridgeClimb suits.

The hardest part of the climb is at the beginning, when we tackle the foundation of the bridge, in a series of ladders winding their way up to the start of the arch. Finally, as you climb the last steps, you look up and the arches stretch out before you. Walking up the arch is much easier, the gently sloping steps take you all the way to the summit, 134m above sea level.

When you’re at the summit, there’s nothing to do except look out and soak up the view. Yes there’s photos but you’ll have a cheesy grin on your face anyway.

The Harbour Bridge is an undisputed icon of the world and there’s no better way to experience it, or Sydney Harbour, than on a climb.

Lisa was the guest of BridgeClimb Sydney.

There’s no doubt Expedia NZ’s #outthere competition winner Caleb Riding is an adrenalin junkie. He takes on the Shark Dive.

Sydney is known for its world-class beaches, the Opera house, boats sailing around the Harbor, diving with sharks….. Right?

Just a short walk from Manly Wharf, right on the end of Manly Beach, is the Manly Sea Life Sanctuary. The aquarium is home to 3m Grey Nurse sharks, stingrays, sea turtles, even sea cucumbers. I’m here to try out the Shark Dive Xtreme – a guaranteed encounter with a shark!

I’ve never been diving before and was really excited – the staff assure me they cater to all diving levels. I make my way past tanks of friendly tropical fish and through the more menacing shark and stingray tunnel.

Tom is my instructor and the only other person on the dive – after a short intro video and a run down on all the equipment, it’s time to jump into our wetsuits and wall up to the dive tanks. There’s a practice pool next to the Shark tank for a test run – it’s easy to pick up and after not long I get the thumbs up.

A small opening in the shark tank leads into a whole other world. There’s so much going on – we make our way around the tank with sharks, turtles, sting-rays and fish swimming all around us. They don’t even seem to notice we’re there. About half way through we stop for photos, just as the sharks come over our heads. One of the big sea turtles swims by and our instructor gives him a hug ­started hugging him – one of the coolest things I’ve ever seen!

After 30 minutes of diving and a quick shower to warm-up, we’re done. I’m left with a new appreciation for sea life and sharks. A great first-time shark diving experience!

Other popular activities in Sydney:

This 6 hour tour – don’t worry, it’s not all walking – is designed to provide travellers with insight into the traditional Aboriginal and local Darug culture. From ceremonies and story telling to busk tucker and a rainforest walk, the tour is for people interested in learning about and experiencing more of Australia.

Plenty of locals will say you haven’t experienced Sydney until you’ve been out on the harbour. You might as well do it in style. This America’s Cup Class yacht is a great way to see the harbour first hand, with fleet racing all part of the fun.

Pedal past some of Sydney’s famous icons on a 4 hour tour that will give you a good grounding in the layout of Circular Quay, the Royal Botanic Gardens, Darling Harbour and China Town.

Sightseeing for adrenalin junkies, this hair raising 30 minute ride zips out of Circular Quay on a high speed tour of the city by water. You’ll head under the Habour Bridge, spin past Bradley’s Head and Luna Park and check out Watsons Bay along the way.

If you don’t have time for a night at the Opera, head out on this tour through the Sydney Opera House. After visiting the great hall and hearing about the history-making moments that have occurred here, you’ll be treated to a Tasting Plate at the iconic Opera Kitchen.

If you’re short on time but keen to see Sydney at its best, this 25 minute helicopter flight is a good option. Take off from Sydney Airport and check out Bondi Beach, the Sydney Opera House and the Sydney Habour Bridge.

It’s all aboard the MV Sydney 2000 for this Sydney Habour cruise. You won’t go hungry with a 7 course degustation and vintage Australian wines, house spirits, beer and soft drink.