As the final notes of the song finish, the crowd goes wild. They’ve sung every word, they’ve got the t-shirts, the hats, they’ve even made up their own dance moves. As Mickey Mouse looks out at his adoring fans and moves on to the next number, the crowd goes wild again. No, we’re not at a concert or a show, we’re at Disneyland. More specifically, we’re at Disney’s Grand Californian Hotel & Spa, inside the Disneyland resort in Anaheim, California, where the magic doesn’t ever seem to stop.

And it is magic, or at least the parents of the 10 or so children sitting in kid-sized rocking chairs in front of a TV in the lobby seem to think so. The adults are drinking glass of wine by the fire, one eye on the flames, the other on their kids.

At the end of each day it’s as if a soft glow of fairy dust has been sprinkled over the hotel’s cavernous lobby. The twinkle of hundreds of Christmas lights helps give that glow, but it’s more than that. It’s the gentle clinking of wine glasses by the fire, the tinkling of the ivories from the pianist (Disney classics of course) and the hush of families that have had a big but beautiful day exploring the parks.

The Grand Californian is one of three Disney hotels within the resort. It’s the most dramatic, decorated in the style of the Californian Arts and Crafts movement, with enormous exposed wooden beams, grand pine staircases and a plaid theme that together make you feel like you’ve entered a super sized hunting lodge rather than a hotel. With 948 rooms, the hotel is enormous, fanning out in a rough U shape to hug California Adventure Park and Downtown Disney, the dining and entertainment precinct leading up to the park entrances.

The biggest boon for guests, aside from Magic Hour privileges, is the dedicated hotel entrance directly into California Adventure Park. Opening right up onto Grizzly Peak, the hotel matches the faux redwood forest theme seamlessly. Guests can pop in and out of the park, with a quick security check, all day and night. This comes in especially handy when you’ve just received a soaking on the Grizzly River Run water ride. Many rooms, and the club lounge, look out over the park and are positioned to catch the daily fireworks show. On the other side of the hotel, there is an entrance straight into the heart of Downtown Disney, and rooms on this side have balconies overlooking all the action. On a warm evening, opening the balcony doors and letting the live music filter in is a great way to unwind before heading down for dinner.

When it comes to food, there are plenty of options at the resort, from Downtown Disney’s long strip of family style restaurants, to the hotel’s very own venues. Inside the Grand Californian there’s the Storyteller Café, for character dining and casual meals, the White Water Snacks for pizzas, salads and breakfast on the go, and then there’s Napa Rose, Disney’s award winning fine dining restaurant. Book in for a chefs table degustation, and work your way through dishes like hazelnut beet salads, crispy Californian artichoke fritters, roasted trout and a truffle mac & cheese that’s always a winner. 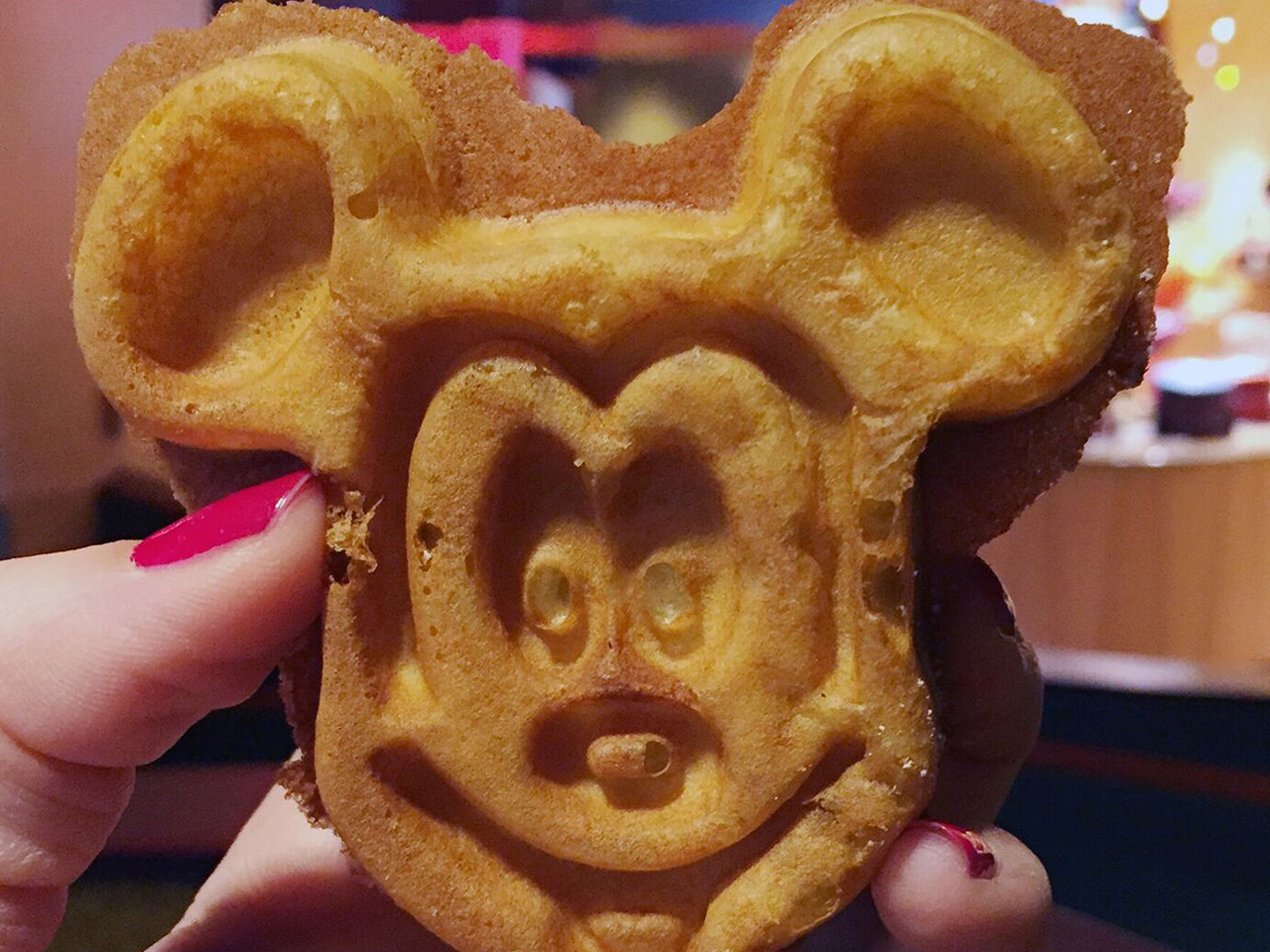 The concept of Character Dining might seem odd but it’s an integral part of the Disney experience. All three hotels have designated character dining venues – elaborate buffets with a smorgasbord of food and a smattering of Disney characters that pop around to tables to meet and greet their biggest fans. Watch the little ones’ eyes go wide as Mickey and Minnie come over for a hug, chuckle as Chip ‘n Dale bust out a jig, and get ready to take a lot of photos – of the kids, the costumes, and especially the food. Breakfast staples include Mickey Mouse-shaped waffles and pancakes, but then there’s soft serve ice cream stations, dessert pizza, savory pizza, omelette bar, salads, roasts, cakes, cereal. You name it, they’ve got it. At the Disneyland Hotel, which opened the same year as the Resort back in 1955, Goofy’s Kitchen is a culinary playground where Goofy dances around during your meal and great for the little ones.

Like any good resort hotel, all three properties have sprawling pool areas. At the Grand Californian there are three pools, along with a Mickey Mouse-shaped family pool, and two hot tubs. Deckchairs with cushions so thick you might as well be sitting on the couch are everywhere. If that wasn’t decadent enough, the hotel has several poolside cabanas guests can hire, complete with large flat screen TV, couch and fridge, that are hugely popular during football season.

The pools don’t usually get busy until the afternoon. In the mornings guests make a beeline for the parks, to take advantage of Magic Hour. At one of the parks each day, hotel guests get access to some of the rides and attractions one hour prior to the public. It’s a fantastic time to experience some of the more popular rides like Space Mountain and Pirates of the Caribbean in Disneyland and the new Guardians of the Galaxy – Mission Breakout! and Radiator Springs Racers rides in California Adventure Park. Many guests get up early, spend Magic Hour in the park, and once the public have entered, head off to find their breakfast. This hour changes the tone of your entire day. It cuts down wait times at popular rides, and gives you a chance to see another side of the parks. It’s great for families with small children who might be overwhelmed by the crowds and the heat later in the day.

The other big benefit of staying on site is the ability to charge food, souvenirs and drinks to your room key. Any venue inside either park will take your key as payment, Some venues in Downtown Disney even take the card, so you don’t even need to take a wallet with you. 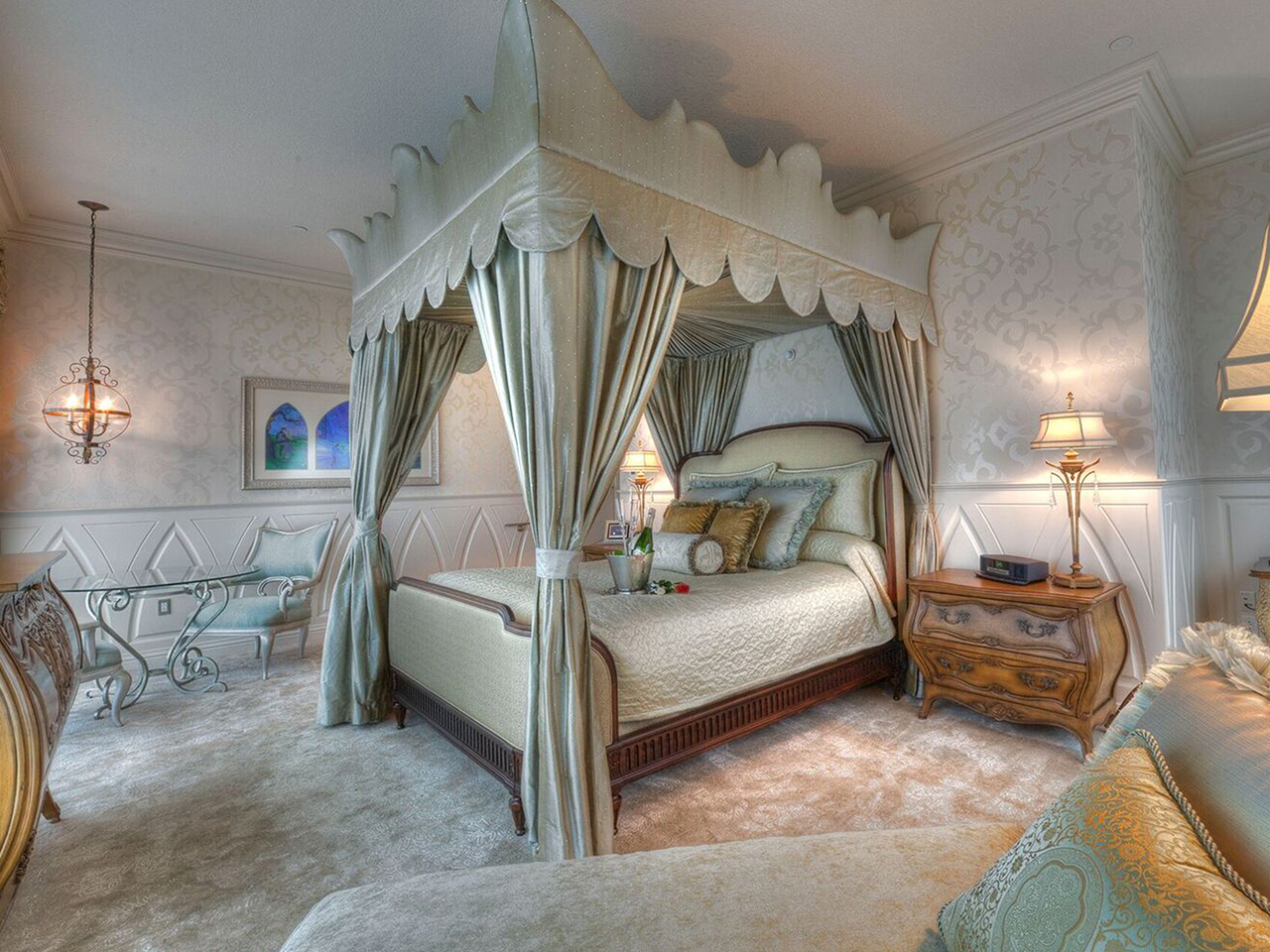 So how do you choose between the three properties? The Grand Californian Hotel is big, bold and beautiful, a hunting lodge meets hotel vibe, whilst the Disneyland Hotel is famous for its exclusive themed suites. From the Fairy Tale Suite to the Mickey Mouse Penthouse, it’s all about the little details. And Disney’s Paradise Pier Hotel, which sits on the outer edge of California Adventure Park, overlooks the Paradise Pier precinct and has rooftop terraces, pools with waterslides and a famous “Kitchen Sink” ice cream sundae dessert that is not for the feint hearted. Whether you want to relax with a glass of wine, settle your kids in front of the TV, meet Mickey together over breakfast or spend the afternoon by the pool, each hotel has its own special bit of magic.

There’s never been a better time to head to Disneyland, for a limited time only, Aussies and Kiwis get access to an exclusive 4 day Disneyland Resort Park Hopper ticket for the price of a 2 day Park Hopper ticket on Expedia. For this offer, tickets need to be purchased before the 31st March 2018, and must be redeemed before the 31st December 2018. See here for more details.

Lisa was the guest of Disneyland Resort