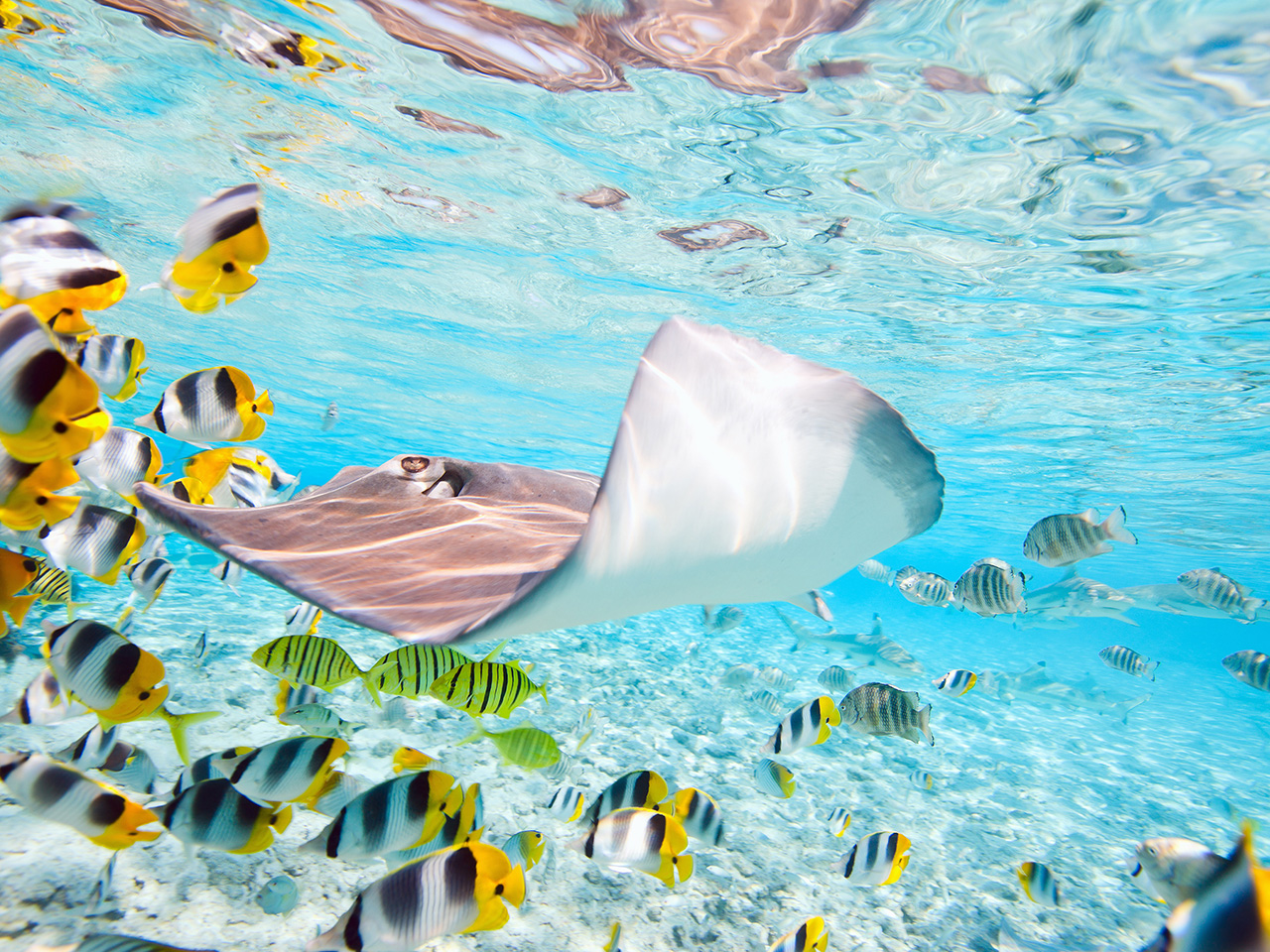 Walking three metres under the surface of the ocean with an aqua helmet on my head is the weirdest experience I’ve ever had. I’m part bobble-head doll on Neptune’s great undersea dashboard and part astronaut walking in slow motion around the moon.

I’ve joined a tour with AquaBlue, based at the InterContinental Resort and Spa on Moorea, Tahiti. On the way out to our dive spot, AquaBlue owner Vincent Lelong explained why we won’t die under his Russian head gear – long rubber hoses hook the headgear to oxygen tanks back on the boat. He hasn’t explained how we’re meant to walk. So, like a baby foal I stumble around in the big blue, totally in awe of the beauty of life from this angle.

My heavy head is making me veer off in all directions. The helmet is so heavy it was lowered onto my head via a pulley system. I stood waist-deep in water, clinging to the boat ladder, as assistant Stefan lowered it onto my shoulders.

There was a hiss of oxygen filling my helmet and then I was slowly drifting to the ocean floor. Vincent held onto my hand lest I drifted into the ether. Once my ears were cleared with a swallow, I gave him the A-OK hand signal and he headed back up to fetch the next of our party of four.

When we’re all standing underwater and breathing as if this is quite normal, he signals for us to follow him over to a rock. We waddle over and use it as an anchor so the currents don’t push us around. And then the show begins.

Vincent is a fish whisperer. Well at least that’s what it looks like when about 50 tropical fish and two very excited stingrays crowd around him. Turns out he has a plastic canister filled with fish food and they’re after it.

It takes a while to get used to the magnification from my little round windows. Once I figure out that the fish aren’t as close as they appear, I stop trying to pat them.

When it’s my turn to hold the canister of treats, the world disappears behind a fluttering wall of brightly coloured stripey faces, all nibbling at the holes in the plastic.

The swish of the big grey stingrays against my legs doesn’t bother me because I’ve played with them before. It feels like you’re rubbing against a wet mushroom. No one has ever been harmed by them here as, contrary to some beliefs, the barb is at the base of the tail not the tip. It doesn’t come into contact with us, or the people who feed them on the sand bar about five minutes away.

After half an hour underwater, we’re feeling brave enough to try a stunt Vincent has dared us to do. We stand on the sandy oceanbed, hold our breath and lift the helmet off our shoulders for a photo, before pulling it back on. I fail, only managing to pull it half off before freaking out I might drown.

As long as you’re not actually scared of being underwater, helmet dives are easy. If you’re used to snorkelling or diving, you’ll like this too. No experience necessary – there’s even a helmet for kids too.

Expedia’s Aussie travellers love French Polynesia, and Tahiti is the most popular port of call. Moorea is just a short ferry ride from Tahiti’s capital Papeete. It’s worth checking out a few of the islands while you’re in the area, most travellers usually spend two to three days at each spot. Check out Expedia’s Tahiti Travel Guide for more information.

The 5 Best Scuba Dives in Fiji