We wouldn’t blame you for thinking Vancouver was the Capital of British Columbia. But that’s not the case. To see the Capital, you need to hop on a ferry, boat, plane, sea plane, or even helicopter and head to Victoria. Perched on the south of Vancouver Island, Victoria is the quiet cousin to the big metropolis that is Vancouver, but boy does it pack a punch when it comes to things to do. Aside from being home to the political heart of British Columbia, Victoria is the perfect base for a Canadian interlude – whether you want to eat and drink, sightsee, go whale watching or stop and smell the flowers. Here are our top 10 things to do in 48 hours in Victoria:

1. Have fish and chips

Yes, fish and chips. Victoria is a city with a stunning harbour, and some of the locals love it so much, they live right on it. Fisherman’s Wharf is one of the most famous “house boat suburbs” in Victoria, where locals have made their homes, complete with gardens, front porches, even white picket fences. Aside from strolling down the “streets” checking out the houses, the wharf is a great spot for fish and chips – Barbs Place is a locals favourite, having opened in 1984 and appeared in plenty of TV shows and films. Save room for some soft serve from Jackson’s Ice Cream. 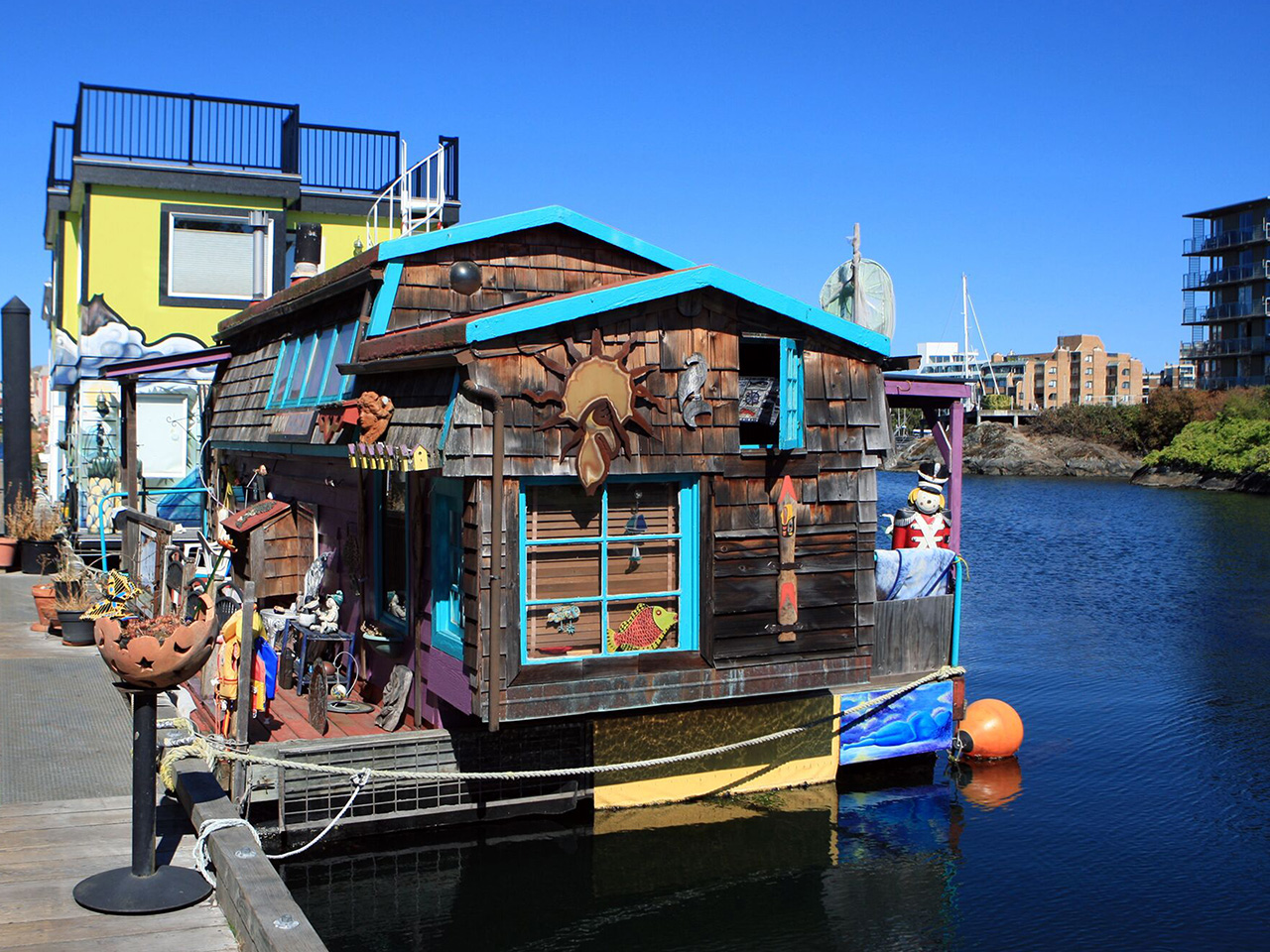 This will hands down be the coolest taxi you’ll ever take. The yellow and black H20 water taxis of Victoria Harbour are famous worldwide, not just because they’re so cute, but because they’re a quick, convenient way to get around the city. There are thirteen different stops on this reasonably priced, hop-on-hop-off service. It’s one of the best ways to see the harbour.

The taxi is fun and convenient, but hands down the best way to see the harbour is from above. Harbour Air Seaplanes have been flying in and out of Victoria since 1982. Hop on just around the corner from Vancouver International Airport and enjoy the quick, 35 minute flight over islands and waterways before making a splash right in the heart of Victoria Harbour. You’ll land and pull up in front of the Empress Hotel – now that’s how to make an entrance!

This may be a super small city, but when darkness falls, one of the prettiest sights are the Parliament buildings lit up in lights. There are exactly 3,333 bulbs that outline the facades – it’s a perfect postcard moment. 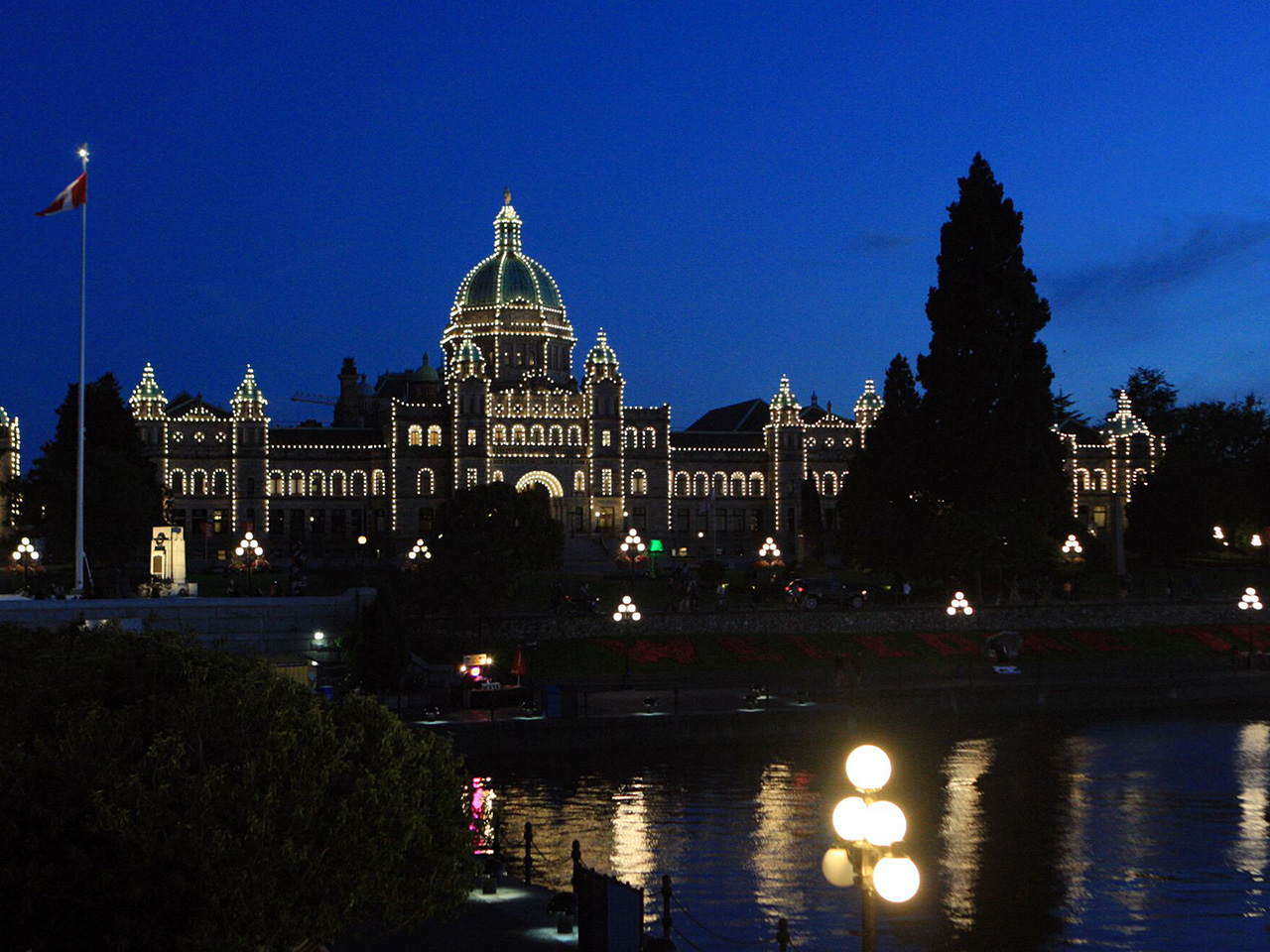 5. Feast on the local bounty

If the gardens are any measure, it’s no surprise that Vancouver Island offers plenty of fertile soil, perfect for fresh produce. Local Chef Cliff Leir is leading the charge in showcasing the best the island has to offer – his award winning Agrius Restaurant is right in the heart of downtown Victoria but everything on your plate comes straight from the sea, the fields or the local veggie patch. There’s even an entire wall of the kitchen full of pickling jars – carrots, cucumbers, asparagus, beans. Vancouver Island has some of the mildest climates in Canada, making it ideal for raising livestock. Agrius serves Metchosin lamb from the island’s south.

We’re not talking about the people (ok they’re pretty cool too), we’re talking about the wet and wild creatures that call this part of the world home. Victoria is one of the top places in the world to set out to see Orcas. Whale watching vessels depart several times a day from this quiet harbour, heading out to skirt the San Juan Islands, where pods of not just Orcas, but Humpbacks, Minke whales, Gray whales, seals of many different shapes and sizes and marine birds call the waters home. You can choose to cruise out on zodiacs or larger boats where marine biologists will tell you all about the locals and their quirks. Remember to bring a jacket for this one!

The time honoured tradition of afternoon tea is taken very seriously at The Fairmont Empress. Victoria’s famous chateau-style hotel right on the harbour has been serving tea since 1908. After a stunning makeover, the hotel is the definition of historic chic, and the Lobby Lounge does old world glamour to a tee. Sip the signature Empress blend tea while nibbling on your tea stand of crustless sandwiches, macarons and scones looking straight out the large windows to the harbour. 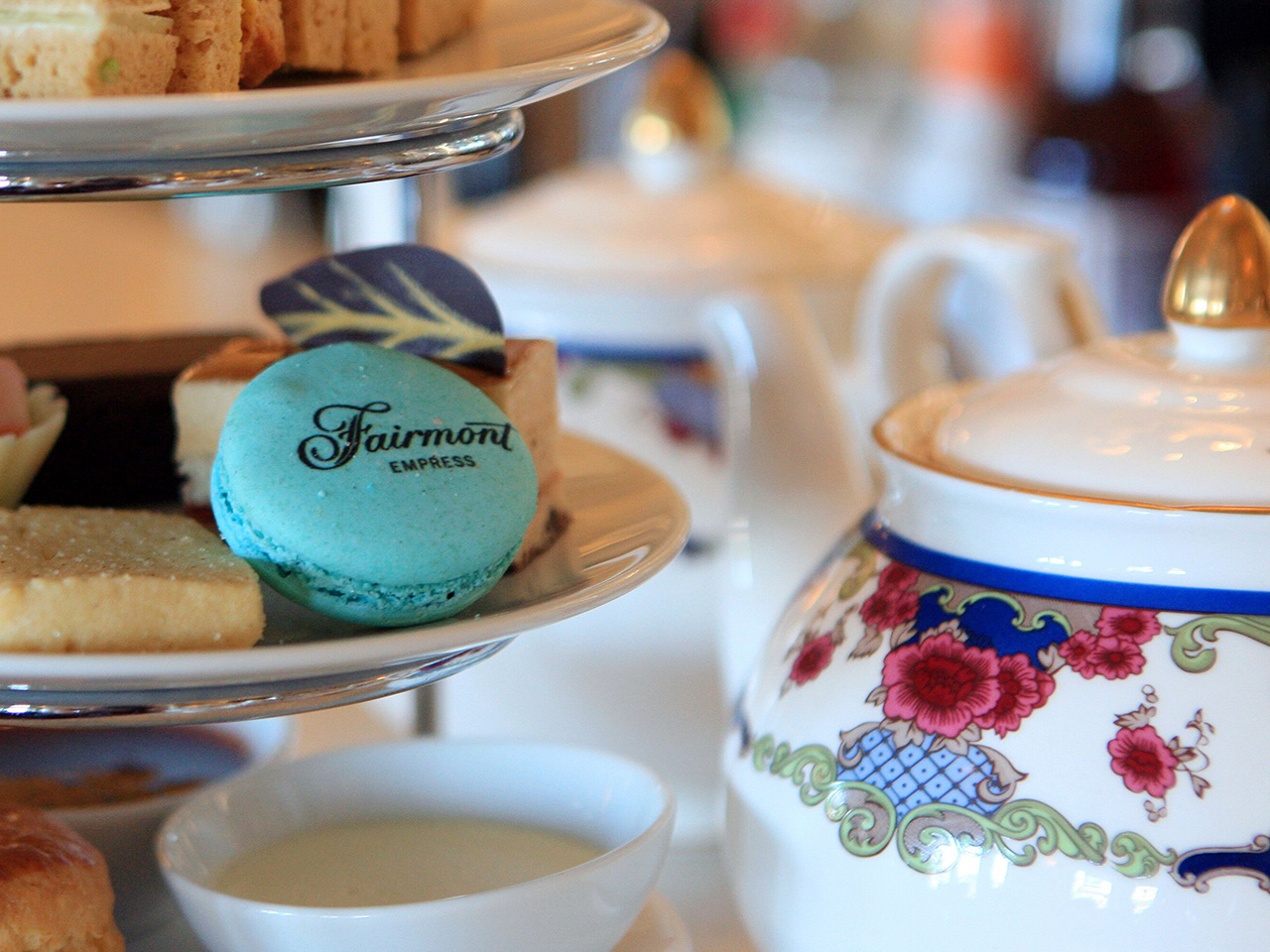 While you’re at the Fairmont Empress, stop by the Q Bar, where very modern interpretations of Queen Victoria’s portrait look down at guests as they sip the hotel’s signature tipple. The Empress 1908 gin is made by Victoria Distillers, and gets its distinct purple colouring from a butterfly pea blossom, changing to a blush pink when tonic water or citrus is added to it. It’s the most exciting gin and tonic you’ll try and is already flying off the shelves all over the country. Pick up a bottle at the Distillery in Sidney, 30km north of the city.

We’re not talking about your average sightseeing tour. If you’re a hungry traveller, sign up for Off the Eaten Track food tours and check out the city’s coolest venues like the Victoria Public Market, where the old Hudson’s Bay Company’s department store has been turned into small eateries and delis, including Victoria’s very first meat pie shop.

10. Stop and smell the flowers

Vancouver Island is home to The Butchart Gardens, 22 hectares of flower gardens, manicured lawns, ancient trees, and water features that have risen from the dust of the Butchart family cement factory. Jennie Butchart began transforming her husband’s factory into this garden oasis back in the early 1900s, now nearly a million people visit each year, particularly between March and October to see the flowers bloom. The gardens are just a 25 minute drive from Victoria, but for a spectacular arrival, hop on a Prince of Wales whale watching tour that concludes at the gardens, with the boat docking right at the garden entrance. It’s not just the gardens that are in full bloom – you’ll find hanging flower baskets on almost every corner of Victoria, there are in fact more than 900 baskets around the city. 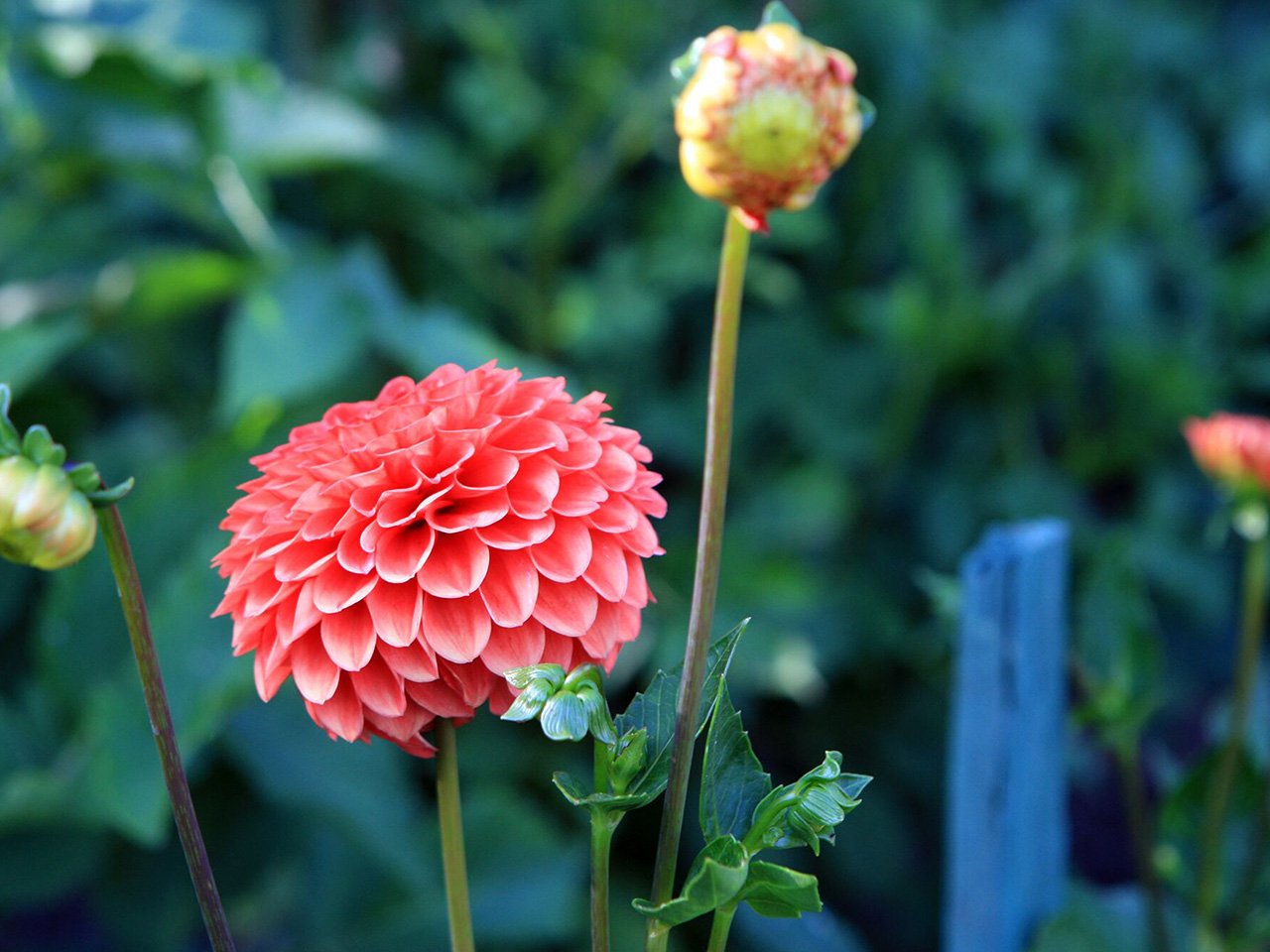 Lisa was the guest of Destination Canada