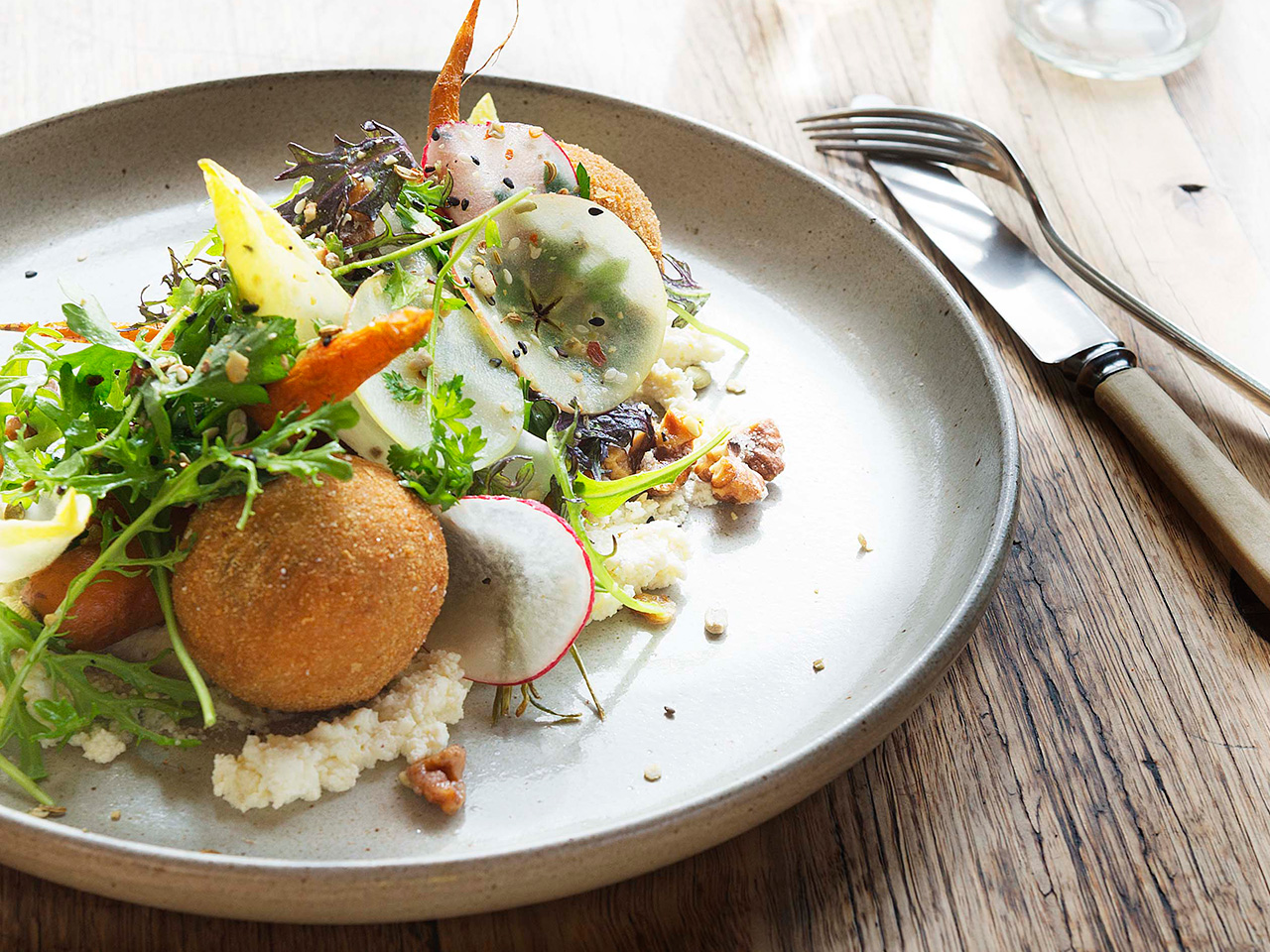 GYO – that’s ‘grow your own’ for the uninitiated – is fast becoming an important part of Melbourne’s dining scene. With kitchen gardens and self-sufficient chefs sprouting up all over the place, we take a look at the city’s best green-fingered venues.

It’s no surprise to hear chef Matt Wilkinson – author of Mr Wilkinson’s Favourite Vegetables – puts produce pulled from the soil front and centre on the menu at his Brunswick East eatery Pope Joan. Café by day and casual restaurant and bar by night, it’s worth travelling to the top end of Nicholson Street for the seasonal and locally grown (there is a vegetable patch out back) dishes served here. Named after the medieval legend about a woman who passed as a man and managed to claim the papal title, Wilkinson’s commitment to organic and biodynamic farming methods shine at this welcoming venue. And if you prefer a protein hit to a plate of greens, try the legendary Cuban sandwich – bursting with pulled pork it won the World’s Best at the Sandwichship 2012.Alternatively, the produce store Hams & Bacon is right next door. Stocked with fresh fruit and vegetables, as well as an array of cheese and cured meats sourced from around Victoria and a recently launched range of in-house condiments, you’ll find everything for a gourmet goodie basket.

This zero-waste café, launched in 2012 by eco-advocate, artist and pioneer of the vertical garden Joost Bakker, was built using recycled and recyclable materials, and prides itself on having no rubbish bins. Instead, any leftover food is thrown in the on-site dehydrator, where it is transformed into nutritious fertiliser to be delivered to farmers who supply the café. The team at Silo by Joost strives to be as self-sufficient as possible, which is why on any given day you’ll find the chefs busily baking their own bread, churning butter and making yoghurt ready for the brunch-time rush. Pull up a seat (disused irrigation pipes) at the communal table (made from reclaimed plywood) and feast on a daily changing menu of fresh, often foraged local ingredients –pine mushroom, garlic and brown rice risotto and four grain, carrot, coriander and almond salad.

Situated in the sculpture park opposite the main entrance of the Heide Museum of Modern Art, the chefs at Café Vue need look no further than the neighbouring historical kitchen garden for their ingredients. Check out artworks by some of Australian’s most celebrated artists, including Sidney Nolan and Laurence Hope, before tucking into a delicious brunch, lunch or afternoon tea – this outpost of one of Melbourne’s top chefs, Shannon Bennett, is dedicated to making use of the produce beds originally planted here in 1934. The floor-to-ceiling glass windows open onto a gorgeous outside terrace, making for a truly enchanting alfresco eating experience. To really get among the surrounding greenery, ask the team to pack you a picnic hamper, or head to the Templestowe Road gallery in Bulleen on a Saturday or Sunday throughout summer for their smoking barbecue events. Bulleen is situated 13kn north-east of Melbourne’s CBD and easily accessible by public transport and a number of bike trails – so your visit can be green from beginning to end. 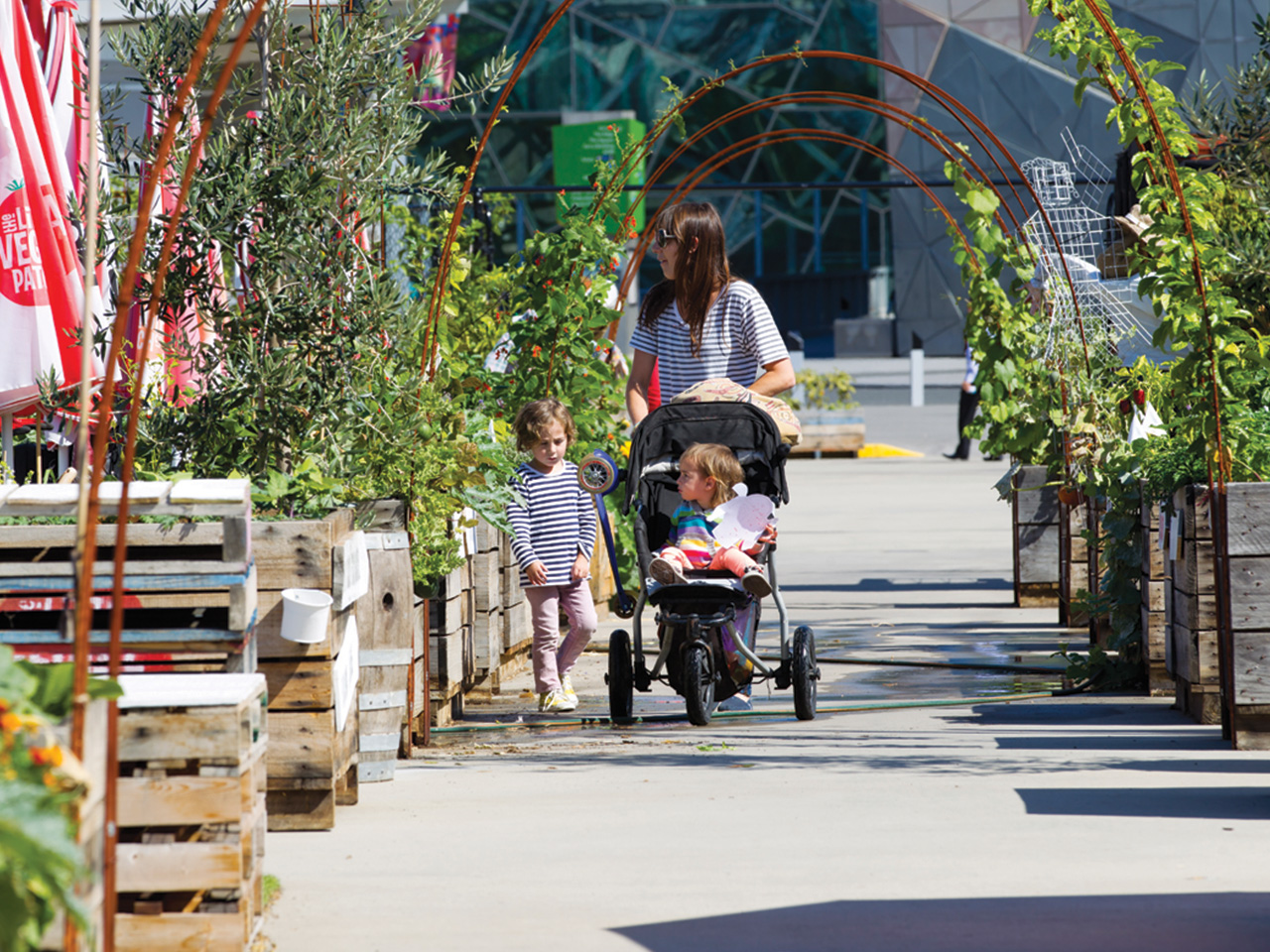 Catering for vegetarian, vegan and gluten-free guests, and very child- and pet-friendly, there’s an all-inclusive vibe at Ceres Café. With 80% of all ingredients served at this Brunswick East institution hailing from the on-site organic garden, diners can be assured their food miles are kept to a minimum. Not only that, the kitchen runs on solar electricity and there’s rainwater heated by the sun for the washing up. Grab a seat at one of the tables nestled between the tea trees or under the marquee and covered veranda. On winter days order a bowl of turmeric roast pumpkin and ginger soup, tuck into quinoa and roast beetroot salad in summer and, whatever time of year you visit, nibble on the locals’ favourite gluten-free orange and almond cake with a cup of native Australian herbal tea. If you’re feeling inspired, sign up to a sustainable cooking class or wander around the urban farm.

Offering a welcome splash of inner-city greenery, Federation Square’s car park rooftop is home to a vibrant community veggie garden and 10 beehives. While the majority of the 140 do-it-yourself veggie plots, housed in individual recycled apple crates, are leased to the public a number of local restaurants and cafes have their own plot, where they grow fresh ingredients to use in their daily menus. Attend an interactive workshop where you can learn how to grow your own produce, take the little ones to a scarecrow-making session and experience the ‘car park to plate philosophy’ for yourself at one of the eateries in Melbourne’s iconic square.

If you’re willing to travel beyond the city’s outer suburbs, about a 1.5-hour drive away in fact, you will be rewarded by Brae in the Otway hinterland. Recently opened, Brae, meaning hillside or gentle slope, relies on its 30-acres of land and on-site garden for a whole heap of organic ingredients – from alpine strawberries to tomatillo and figs. Hailing from another regional restaurant – the much-lauded Royal Mail Hotel in Dunkeld – chef Dan Hunter says he learnt the importance of growing your own produce while working at Mugaritz in northern Spain, ranked the number-four restaurant in the world. With this kind star talent in the kitchen, it’s fair to say the dining experience offered here is pretty special – the degustation menu costs $180 per person. For foraged fine dining a little closer to the CBD, head to the south-eastern suburb of Ripponlea and world-renowned chef Ben Shewry’s three-hatted Attica. Our advice? Book in advance, tables get booked up super-quick at this celebrated restaurant.