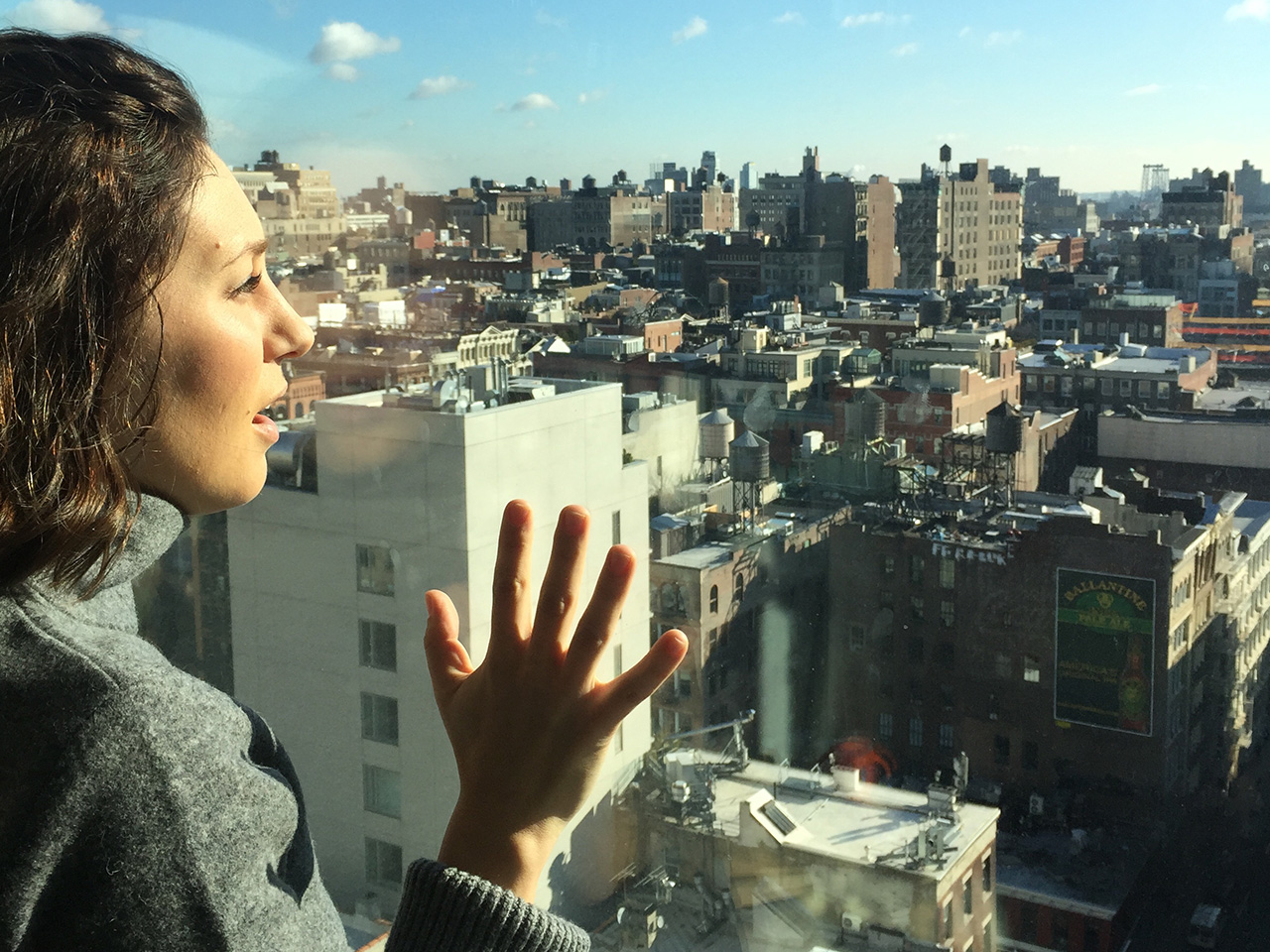 As Shakespeare once famously said, ‘Do your research before booking a hotel in NYC.’ Clever Bill. He was dead right.

Happily, we’re slightly more researched than many, having spent multiple months in Manhattan over the past few years. We know precisely the areas we like, and exactly where we like to eat and drink, and have an extensive list we hit when we arrive. You know, like everyone else.

But that was all pre-baby… Speakeasies til 3am and breakfast at 1pm type fare. Now we have a small, adorable companion who insists on regular food and naps and a 6pm bath-boob-bed ritual. This inspires a new style of travel, obviously, but mostly it means we need space. Space for cots, and prams and big, puffy jackets, luggage and the 10 pairs of Nikes I’ll be buying because I have issues.

New York, however, is not the best at space. Brooklyn – wide open, quiet Brooklyn – was floated for about four seconds, before I remembered how much shopping I wanted to do, and where most of that was located. (Not Brooklyn.)

We knew we wanted to stay downtown, (we generally stay around the West Village/Soho), but the last time we were in NYC we spent a fair smack of time on the LES and in Tribeca, so we thought we’d try someplace closer to that.

Cue The James, right on the border of Soho and Tribeca and to be honest, the perfect position for a couple of kids with a pram and a penchant for good coffee (and the crostini at Locanda Verde.)

Our room was incredible. SO MUCH SPACE. It was a corner room, with floor to ceiling views right round of Soho, the LES and the Financial District, and uptown. Mind-blowing on a sunny day, and great fun to watch at night. 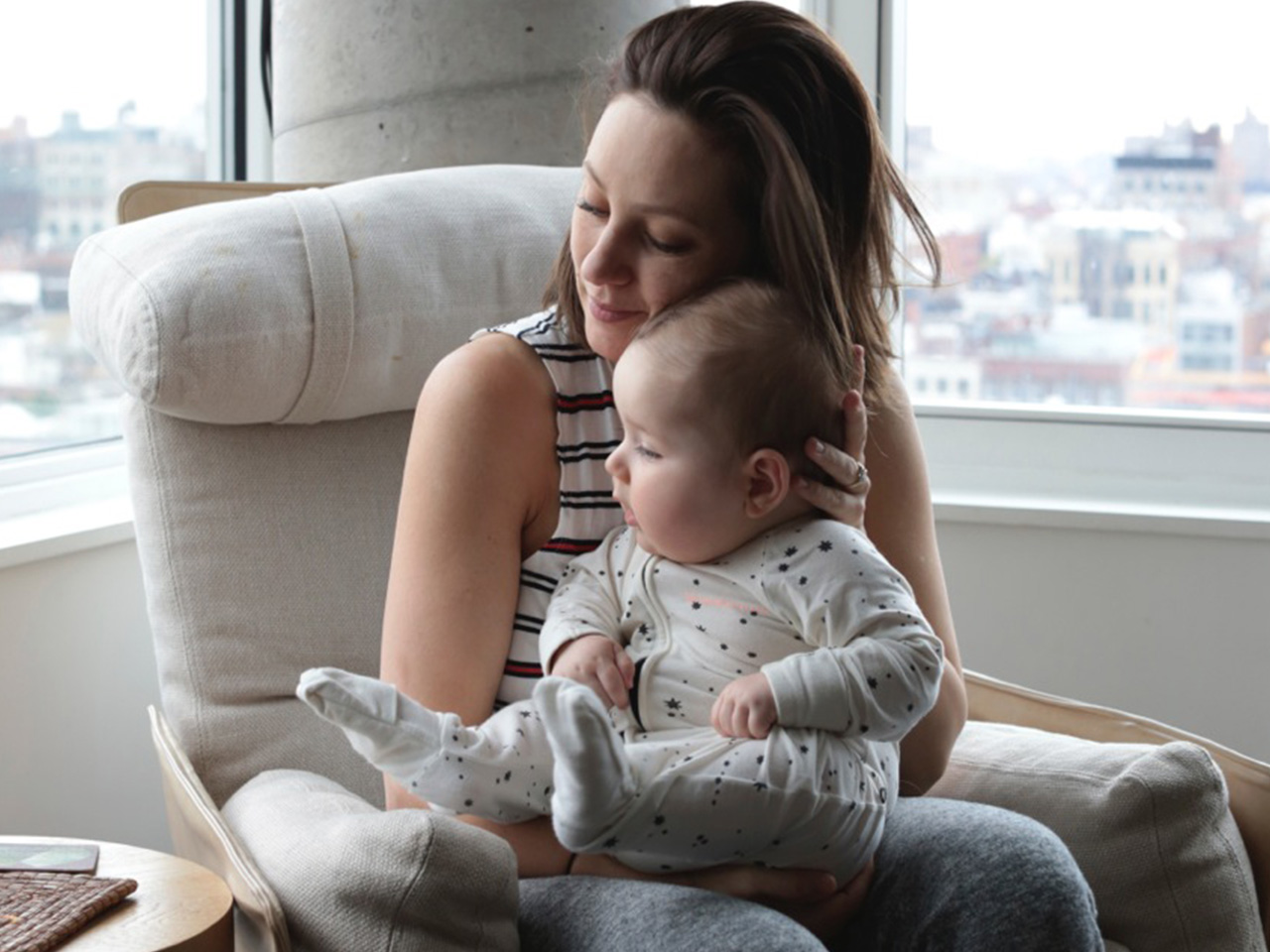 It had an enormous marble bathroom, (the kind usually reserved for Thai spa retreats) complete with a bath (a big bonus with a baby in tow) and a separate living room. The décor is minimalist but cosy, neutral colours and textiles are set against dark wood floors and crisp white walls. It feels like someone’s apartment, not a hotel. There is some wear and tear, this is not a brand new hotel, but it feels fresh and homely.

I need to clarify that we booked a one-bedroom apartment, not a room, because spending 12 nights in a small box with your teething baby’s cot jammed 5cm away from your head is no holiday. Also, it means that when he goes down at 7pm in a dark room with his white noise blasting, you have nowhere to go and nothing to do except play on your iPads in pitch black darkness. I want to point out though, that we know several people, related-to-us people even, who’ve stayed at The James in a regular room or corner studio and been very happy with the amount of space.

We set up his cot (the baby’s, not my husband’s) in the living area, which meant that when he went to sleep, we could read and watch TV and eat our dinner (usually take away from Gourmet Garage ‘round the corner – I live on their chicken soup when in NYC – it perfectly balances out the burgers and pizza and pastries and peanut-butter based desserts) like normal humans. This other room set up also meant that on the few nights we got a babysitter, (The James uses the Babysitters Guild, which gives incredible peace of mind), she had somewhere to sit to do her Sudoko/Pinterest. 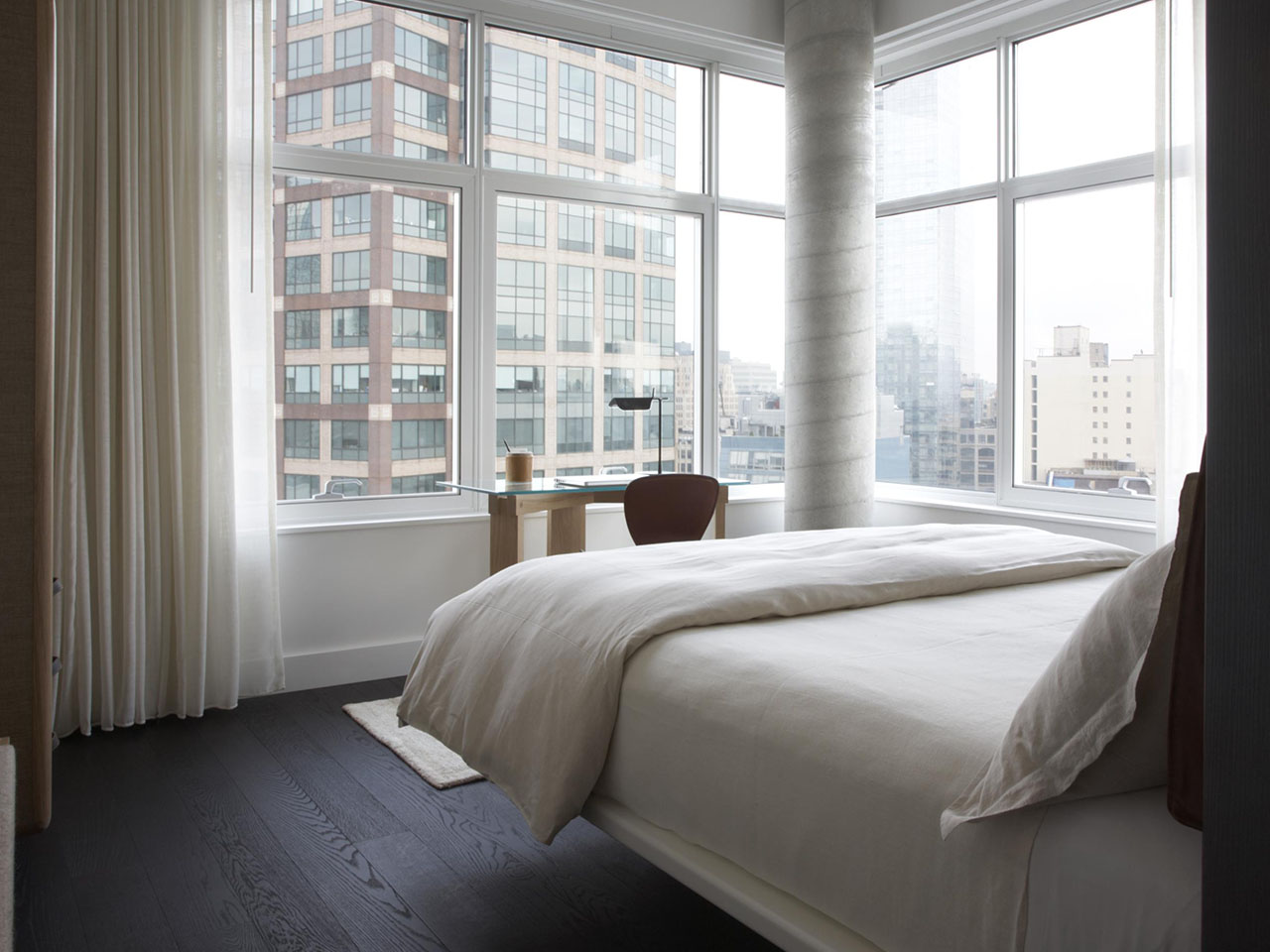 The James does a cracking job of making you feel like you’re coming home after a day out in the cold. Friendly staff, animated “welcome backs!” chatty door guys, a deliciously toasty lobby, an enormous twinkling Christmas tree, complementary muffins, cookies and coffee each day… this is not a given in NYC.

With the exception of The Crosby, I have found most hotels in the Big Apple lack a warm, welcoming vibe. Not so at The James. They did everything they could to make us welcome, including a microwave and toaster so we could prepare baby food in the room. Useful and appreciated.

The gym is small but well edited, and boasts a breathtaking vista. It’s definitely worth using, not least because you need to earn your daily Cronut (the famous Dominique Ansel Bakery is two blocks away, ditto Laduree.) It seems crazy to eat in when you’re in the most exciting dining city in the world, but if you do, there are a few options: David Burke on the ground floor (a large, semi-formal steakhouse and bar serving standard breakfast fare), the Treehouse bar, which seems like it would be a far better idea in summer since it’s outside, and Jimmy’s, which is the rooftop bar (AND POOL), with movie-scene style 360 degree views. You have to go up there and feel the wind in your hair as you look out over the city, whether it’s 3 degrees or 30 degrees. It was heaving with Christmas party folk when we popped up for a drink, so we just had a quick Old Fashioned then set off for dinner.

But as lovely as all of this is, in NYC it’s what’s outside that counts: location. And The James smashes it. 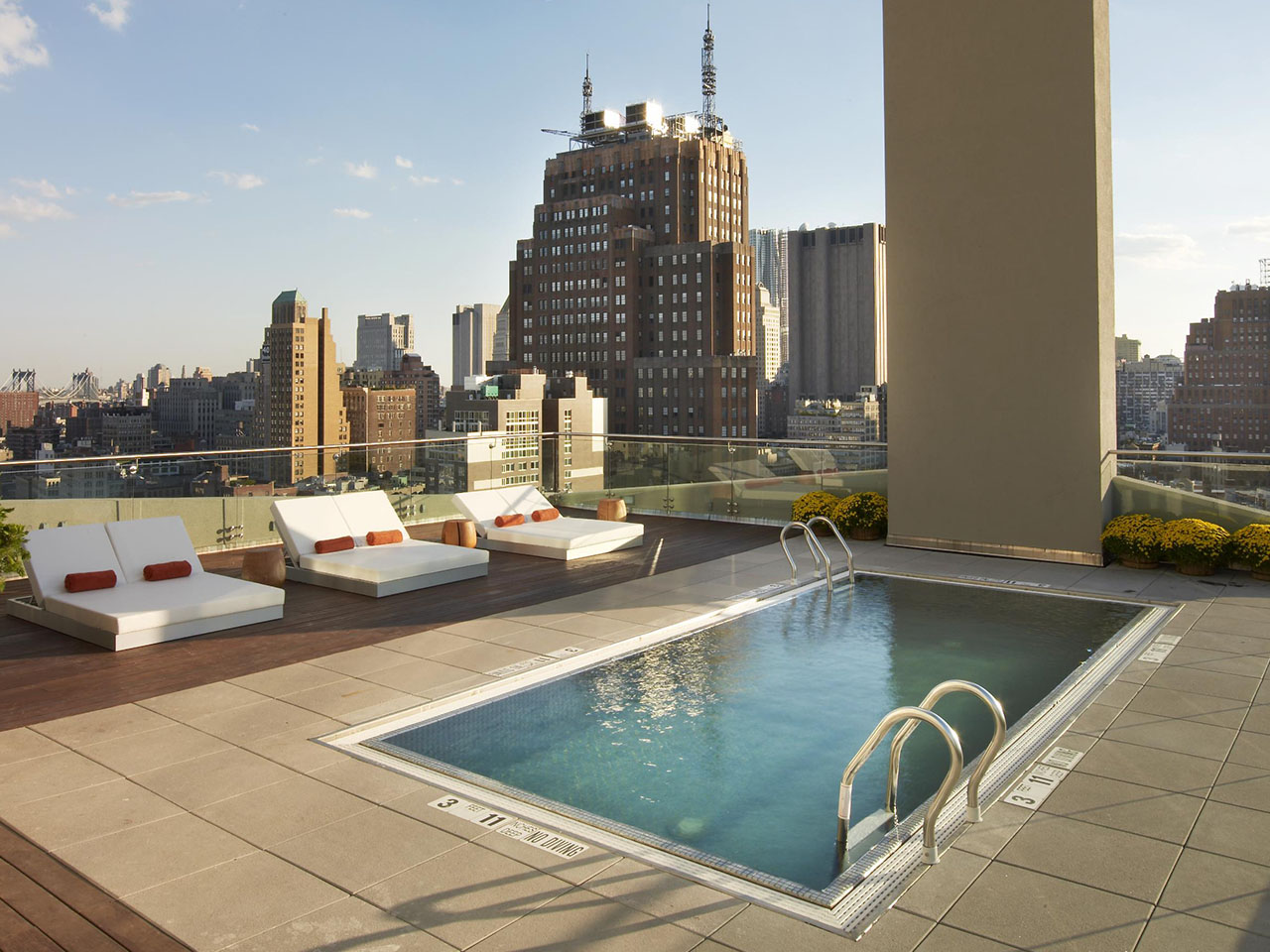 The hotel is on the corner of Grand St and 6th Avenue, just underneath the coolest bit of Soho’s shopping bit. Alexander Wang, Isabel Marant, Celine, Acne, Kirna Zabete, J.Crew, are all a street or two away, and Broadway, which roars with chain stores like TopShop, Madewell, Zara and Uniqlo, is just a couple of blocks up. You’re removed from the manic, touristy part of Soho, which is a relief, but you can dip into it with great ease and pace.

Keep walking along Grand St and you’ll soon hit the LES and Chinatown. Turn left up Mott or Elizabeth and find yourself in a hive of fun, trendy little cafes (Egg Shop being our favourite) and stores (hi, La Labo) that are worth exploring.

Head the other way, over Canal St, and you’re in Tribeca, which ranges from the chic and elite of the Greenwich hotel (home of the best massage in the world; notorious celebrity hang), the nostalgia of Square diner (pancakes with bacon and fried eggs, please) and the hipster vibes of Everyman Espresso and Best Made. It’s a lot of fun. Or, jump on the subway at Canal St (100m away) and shimmy uptown for the day.

The James is one of the few places I will thoroughly, no, emphatically recommend. It’s the perfect haven in a flawlessly mad city. Stay there.