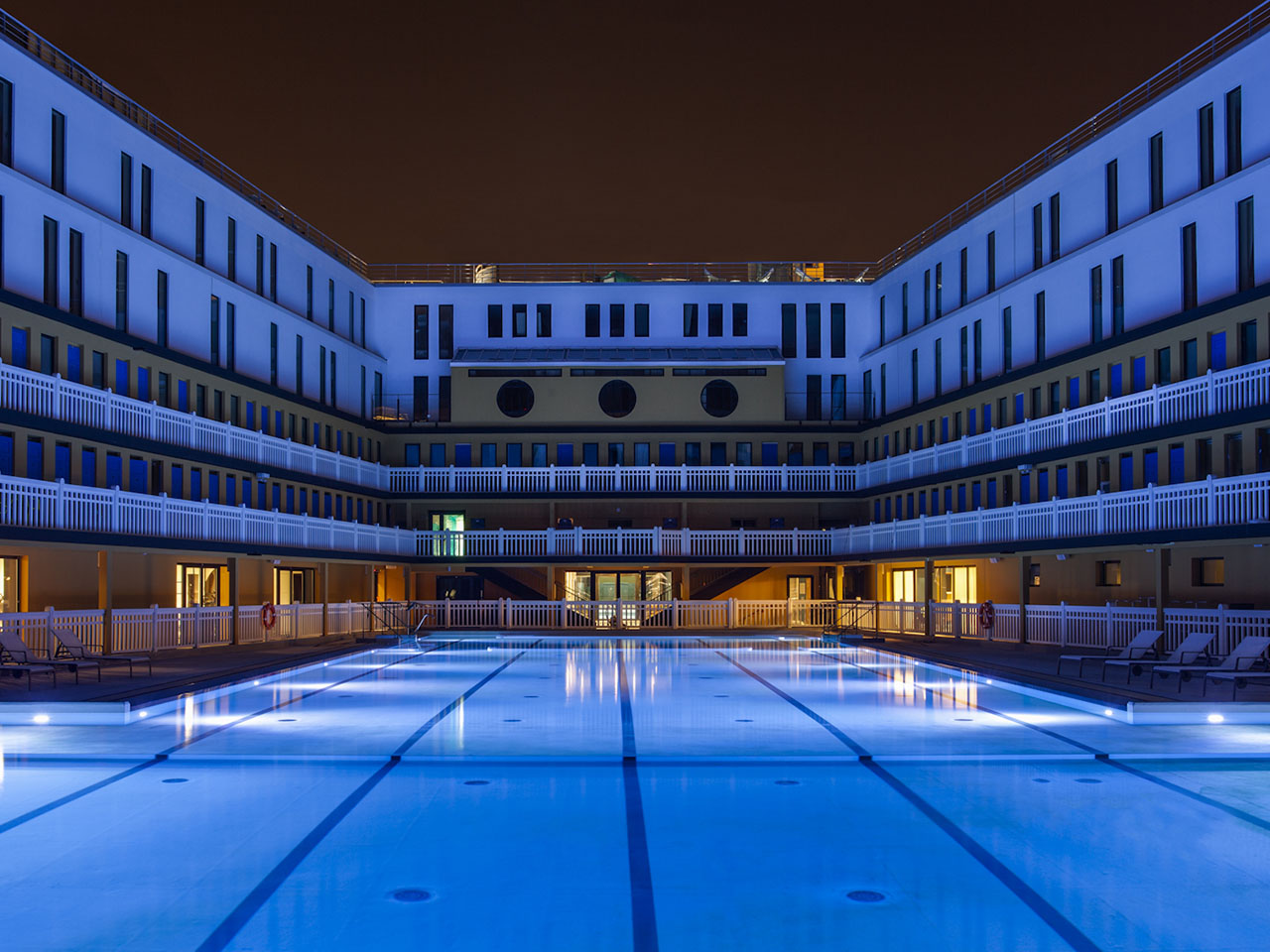 The iconic pool is so integral to the Molitor by MGallery hotel in Paris it would be criminal not to take a dip. But, shame on me, I didn’t, and I’m still regretting it! Our stay in Paris was a short one; two nights but really only one day. You can imagine the anxiety that induces when you want to see everything (even if you’ve been to Paris 15 times already)! So I implore you to please check out this stunning modern design hotel and spend some time lazing by, and in, that pool. Do it for me?

There are actually two pools at the Molitor; one indoor, one outdoor. If you recognise them, it may be because you’ve seen the 2012 film Life of Pi. The title character “Pi” Patel is named after Piscine (French for pool) Molitor. The pool has a much bigger claim to fame though; it’s the birthplace of the bikini! In 1946, the unveiling of the first modern bikini was held there.

Piscine Molitor was built in 1929 by architect Lucien Pollet and designed to resemble an ocean liner. And it sure does! The complex ultimately closed in 1989 and lay abandoned, covered in graffiti and home to some wild parties. After years of work and millions of euros, the five-star hotel opened in May this year.

This hotel has really stuck in my mind. The pool is striking and we could look down on it from our gorgeous room. Obviously the place is brand spanking new. The décor is modern and has a real designer, boutique feel. Where some five-star hotels let themselves down on the finer details, this one certainly doesn’t. Designed by Jean-Philippe Nuel, even the most basic rooms have 40″ flat screen TVs, Nespresso machines, Bose docking stations, bathrobes and Clarins products. And the bed! Amazing! Most rooms have views of the pool while the suites have terraces and some have views of Paris. WiFi is free and was very reliable. I enjoyed the table and chairs by the window where I could sit and get some work done and the bathroom was great and had a tub. Hooray! They’re so rare in new hotels these days. 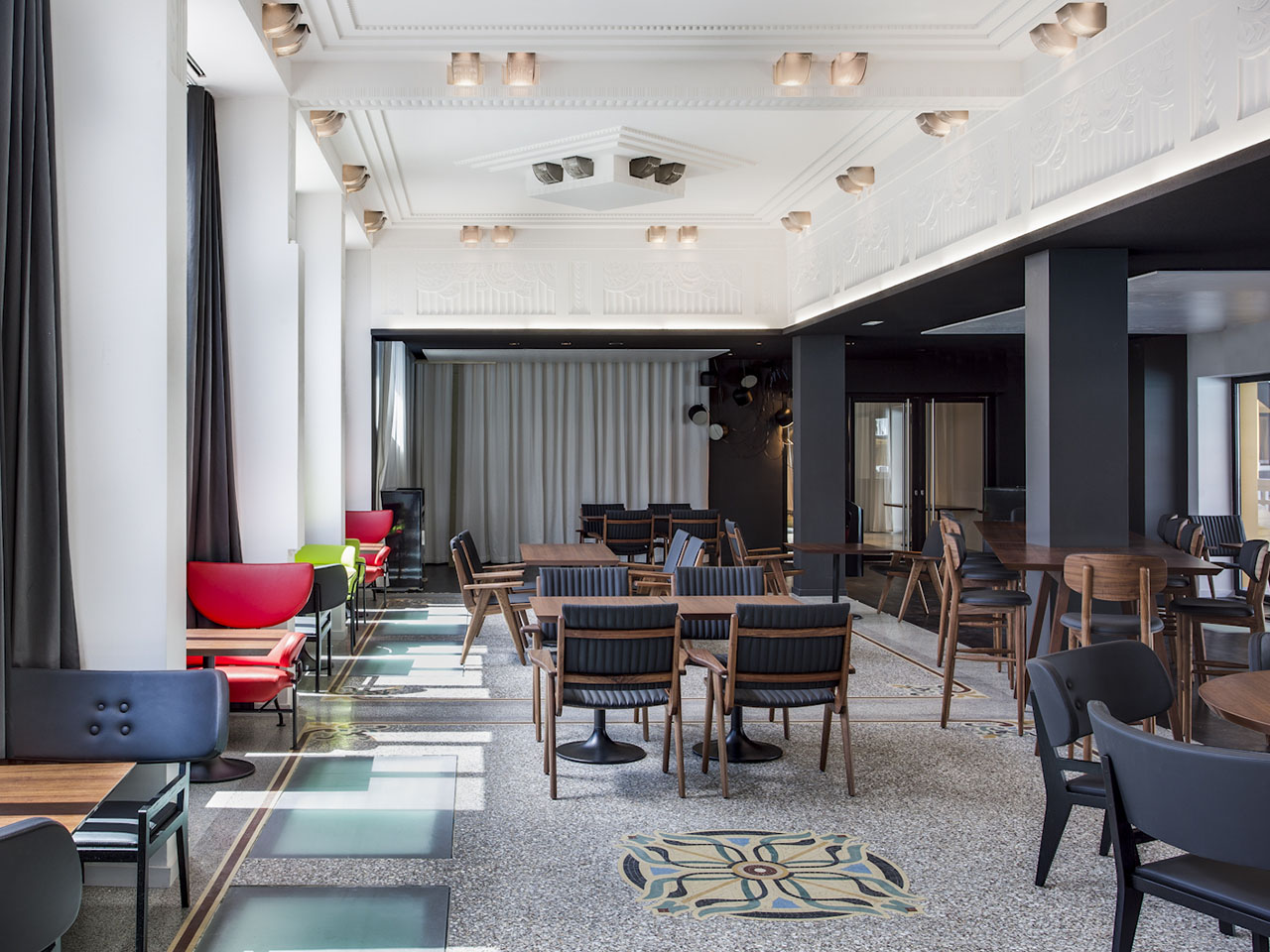 The lobby is a bit polarising. It’s very industrial and there’s some unique modern art, including a graffiti Rolls Royce! I can’t say I was a big fan. The exterior of the hotel too, is not much to write home about and it was a real disappointment that there was never anyone at the door to help with bags or greet us; something I think you should expect from a five-star hotel. The entrance to the hotel, at the back of the building, isn’t very obvious, and needs some help! When you walk in, it’s a little confusing where to go as it’s nothing like a regular hotel lobby. Staff on reception were great though.

Now, the location. If you’re a sports fan, you’re going to be in heaven. It’s very close to the Stade de Roland Garros and Parc des Princes and not far from Auteuil Racecourse and Pierre de Coubertin Stadium. But this isn’t central and there’s not much going on in the surrounding suburbs. On the plus side, it’s very quiet and feels safe. To get into the city you’re looking at a 10-minute walk to the Metro, then a 20-minute ride. It’s not too far, but we found it a bit of a drag when heading to dinner with friends on the other side of the city. You’ll struggle to pop out and find coffee or dinner close by.

Some staff were amazing and others a little abrupt (Parisian?!) and hesitant but when we visited it hadn’t been open long so we’ll put it down to teething problems.

Overall though, this is a memorable and unique place to stay and those pools are just breathtaking.

Previous post Playing in Las Vegas' Sandpit with Dig This

Jen Bishop is the full-time blogger behind Australia's leading interiors blog, Interiors Addict. A journalist since she left high school, she is originally from the UK but made Sydney home six years ago. This year, the newlywed is working on the road for 6 months as she explores the UK, Europe and America with her husband. She loves travel and discovering hotels around the globe with beautiful, cool, design-focused or unique interiors.
Twitter Google