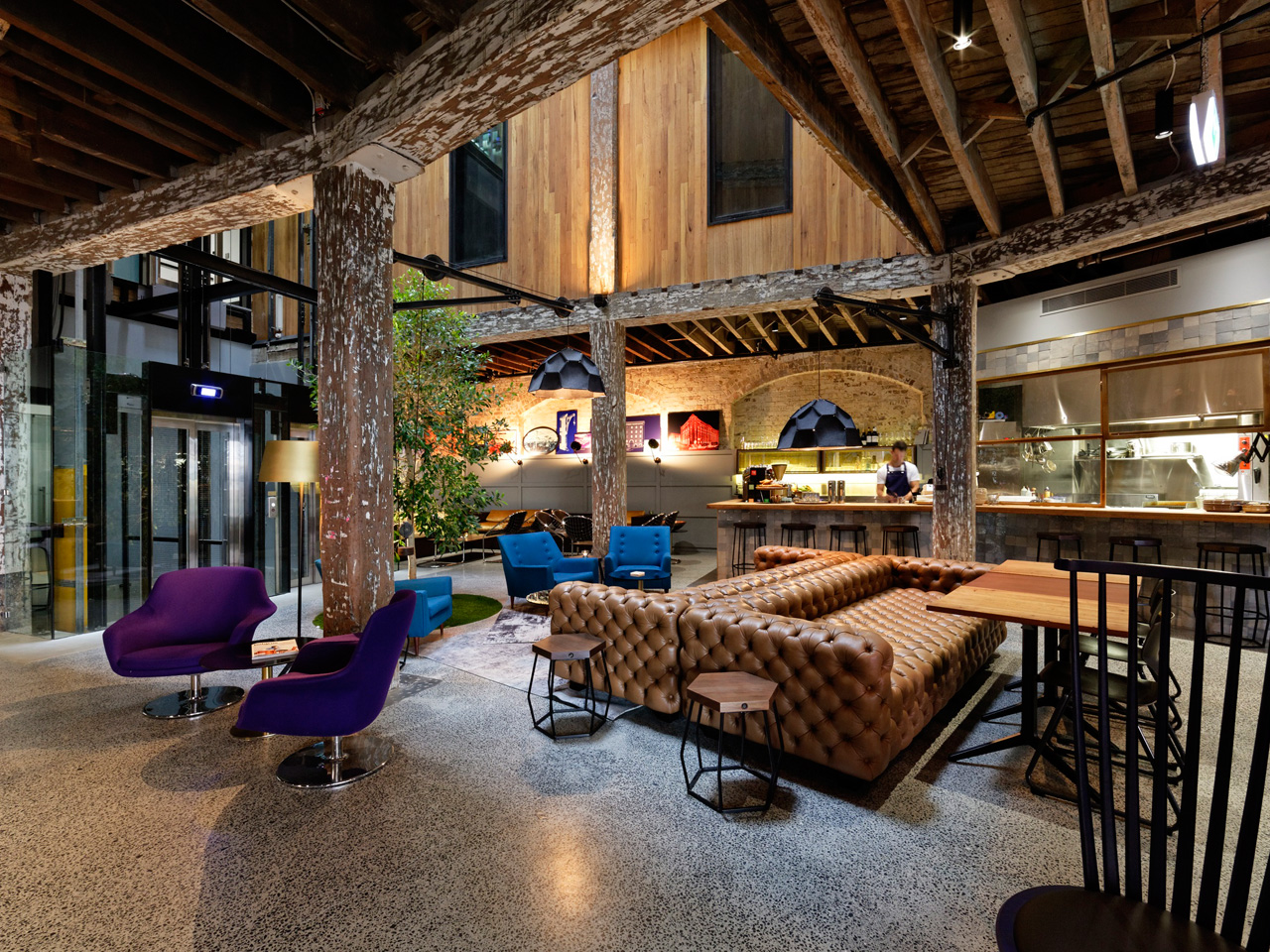 From historic department stores to converted warehouses, Sydney hotels are giving historic buildings a new lease on life. Check out these cool city sleeps where what’s old is new again.

Pyrmont has a past, with plenty of historic warehouse buildings hiding in the backstreets, but it’s only very recently that those spaces have been allowed to shine.  1888 Hotel opened its doors last year as a 90 room boutique hotel. They’ve got plenty of whiz bang technology – even claiming to be the world’s first Instagram hotel, with a local Insta-walk and free stays for Instagramers with more than 10,000 followers – but the biggest draw card is how they’ve kept plenty of the original character. Walk through the unassuming doorway into an atrium that stretches high above, with beautiful exposed Iron Bark beams and funky furniture filling out the open space. A glass elevator clings to one wall and takes you up to rooms that range from the very honest Shoebox (at 15 square metres, it’s not even that small) to The Williamson, a roomy 36 square metres with a private entrance and cocktail bar. Original beams  Local designers have custom made the eclectic mix of modern furniture but the desks are made from original beams pulled from the atrium. The prices aren’t astronomical but there’s character in spades at this fun and funky hotel.

The old Gowings Building was one of Sydney’s most famous department stores, selling well-to-do Gentlemans clothes and knick knacks. Beloved by many since opening it’s doors in 1868, these days the space is shared by Topshop and QT Sydney. This five star hotel sprawls out across the top floors of Gowings and the neighboring State Theatre, and takes the building’s past to a new, dramatic level. Famous for staff in full art deco costume, elevators that play music customised to the number of people inside (expect Are You Lonesome Tonight if you’re solo or Get This Party Started if there’s more than four of you), and an interior design style that is so wacky it works, this hotel is the spot for a city stay that’s something different. Make sure you book into the QT Spa or Barbershop and don’t miss Gowings Bar & Grill – packed most nights and always popular for after work drinks.

One of Sydney’s old dames, this hotel has 336 rooms and 26 suites, and plenty of charm. Dating back to 1856, the original building began life as the John Fairfax & Sons newspaper printing building and then from 1956 housed the Bank of New South Wales. Constructed with Bondi sandstone and Bowral trachyte, the building is a beautiful example of city architecture, at the time standing at 50m high due to the Height of Buildings Act. Rooms look out over the street and onto the central atrium and are sleek and chic. The spacious bathrooms are a testament to the past. Big names in the culinary scene have long occupied restaurant space inside Radisson Blu Plaza Hotel and the latest is Bentley Restaurant & Bar, which is raising the bar for hotel dining.

Built back in the 1800s, this historic building was given a new lease on life a few years ago and is a popular spot for tourists who want to stay right in the heart of The Rocks. Just a few minutes walk from Circular Quay and the Harbour, this building didn’t lose any of its character as the high rise buildings rose around it. First used as a hotel in 1989, the Harbour Rocks Hotel emerged two years ago, when the walls were brought back to their original glory, showcasing sandstone, brickwork and beautiful wooden beams. Make time to stop by Scarlett Restaurant, which sits on the site of the city’s first hospital. Set on the site of Sydney’s first hospital is the newest addition to the vibrant restaurant scene in The Rocks, Scarlett Restaurant. This unique combination of heritage charm and the latest in modern appointments brings together two beautiful styles into one outstanding dining venue. Soft leather seating and history filled stonework give Scarlett Restaurant an ambiance like no other restaurant in Sydney. Dine in the privacy of our private dining room, or enjoy the warm atmosphere of the main restaurant, opening up onto historic Nurses Walk. Fine dining steeped in history is brought to life again at Scarlett Restaurant, the oldest new restaurant in Sydney. Serving breakfast lunch and dinner daily