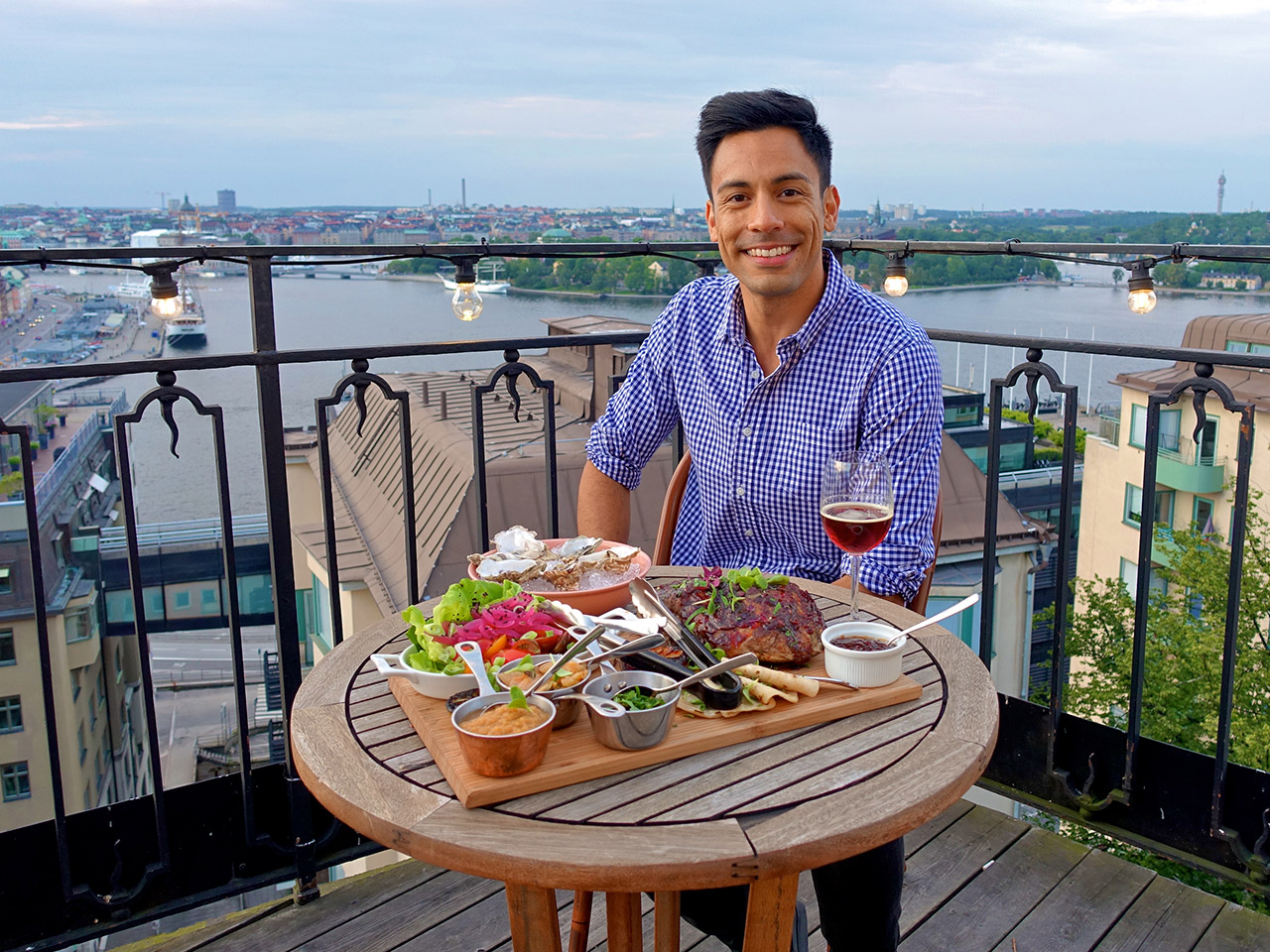 Most travellers to Europe tick off their typical hotspot destinations – London, Paris, Rome, etcetera, etcetera. But I’m about to put a case forward to encourage all travellers to Europe to head further north. Yes, I know, it’s colder up there. Dare I say it, you might even have to pack a layer or two, even if you’re going in the middle of the year. Despite the fact it’s not one of the big major European tourist hubs, Stockholm is one city that really should be on your European bucket list.

I had always thought of Sweden as being a cold and dark city, without much appeal for a seeker of the sunshine like myself. Little did I know though, Stockholm’s summer sees an incredible transformation. A city normally known for wintery gloom truly comes to life in the middle of the year – albeit for just a few months. But it’s during this brief window of sunshine and warmth that you’ve got to seize the opportunity by the hands, and explore this jewel of Scandinavia.

Without doubt, Stockholm’s unique landscape really does make it one of the most beautiful waterside cities in the world. A city of fourteen islands, water is a constant theme all across Stockholm. Lakes surround beautiful island forests; the archipelago and its 30,000 islands are a maze waiting to be explored. I also believe that this is one of the reasons why Stockholm is one of the most eco-friendly cities I’ve ever visited. There’s a constant connection with the environment, and in particular, the water. Saying this though, the sea breeze does kick in on a sunny July day, with the reminder to always have that extra layer close by.

With so many islands, you’d think Stockholm would be difficult to get around, but despite its layout, this is a convenient city to navigate. Bus and tram stops are located all throughout the popular parts of the city, and there are taxis, both on land and water. But one little known secret of Stockholm lies underground, in its unique train network. 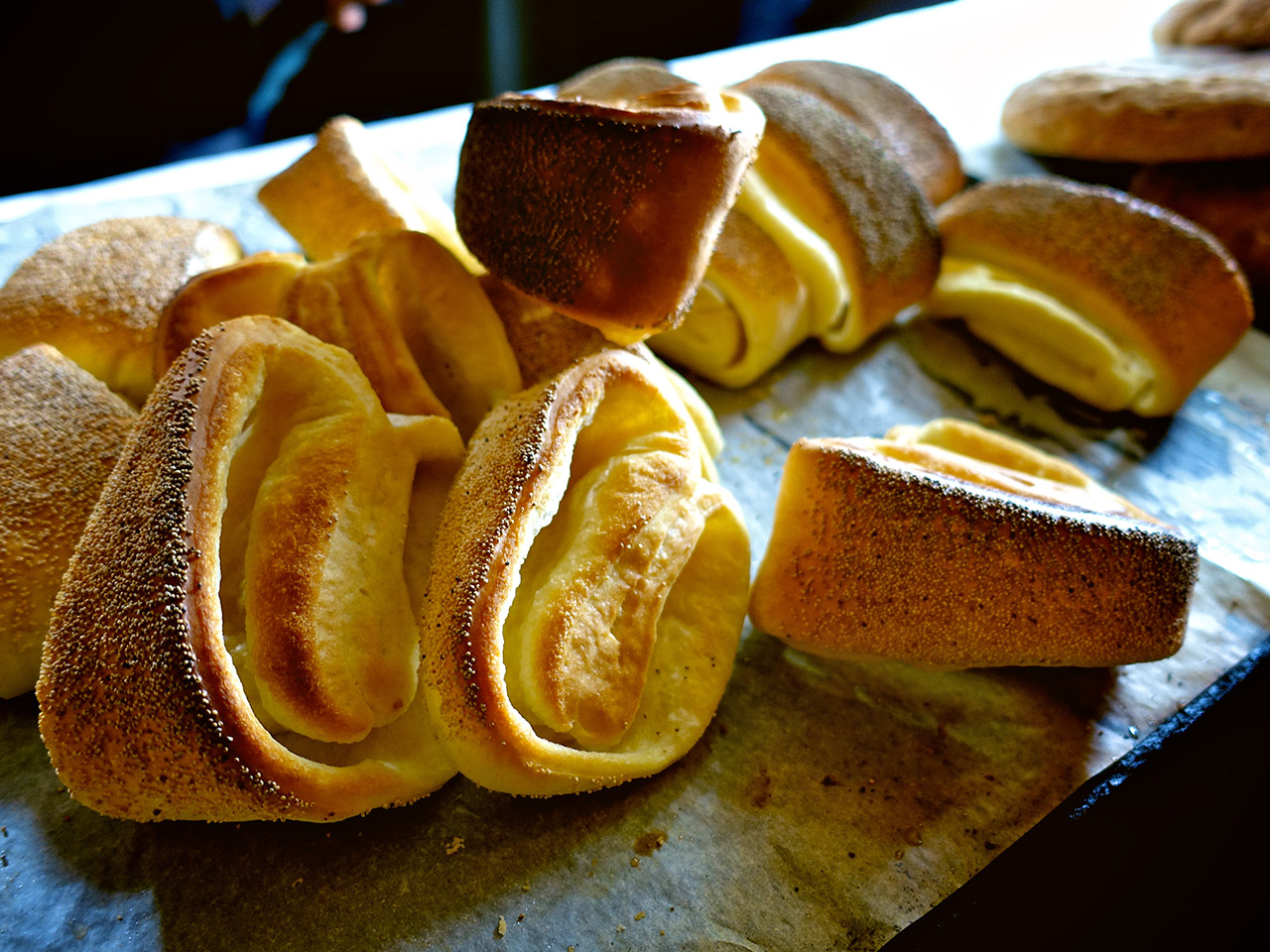 You see, not many people are aware of the fact that Stockholm is home to the world’s largest art exhibit. And more uniquely, that it’s found in its train network. At over 110km long, this collection of incredible sculptures, paintings, mosaic and art installations occupy more than 90 of the 100 stations. Some stations contain miniature replicas of traditional Swedish towns, while others are three dimensional tributes to Swedish sports and Olympians. Others are larger in scale, with the art piece literally taking up the entire entrance to the train platform, while others feature photographs and sculptures placed around the station. It’s not uncommon to see passengers taking a moment to photograph them. Indeed, you can spend a whole day on a day-pass, traveling through the stations, and just admiring the many pieces of art.

Segue tours and bike tours all take advantage of the city’s spacious roads and paths. And to be completely honest, being stuck inside a car or a bus and seeing the city from behind windows is probably the last way you want to tour Stockholm in the summer months. Being outside, soaking up the sunshine and the fresh air is the best way of exploring the city’s islands and winding streets.

Some people might argue that Melbourne is the coffee capital of the world, but here in Stockholm, the concept of a coffee break is taken potentially even more seriously. It’s called a “fika” and for everyone that lives in Sweden, it’s a way of life – no arguments about it. A fika is essentially a coffee break with your colleagues, or family and friends. It’s more than just escaping to get a cup of coffee though – it’s about socialising, taking some time out of your day, no matter how busy you are, and setting aside some quality time. It doesn’t matter what type of coffee you have, it’s just got to be accompanied by something sweet. Cinnamon buns, rolls, cupcakes and slices are all acceptable fika sweets, and I think it’s well and truly your responsibility to sample them all. I mean, come on, it’d be rude not to observe local custom when in Sweden…!

There are hundreds of coffee shops in Sweden, but to experience a local fika, try to find one with table service, as opposed to a faster take out counter, and look for a good window display of sweet treats. Often, this will be the sign of a cafe that welcomes a traditional fika experience. And if all else fails, just look for locals who seem to be enjoying a break from the work day with a coffee and cake in front of them! 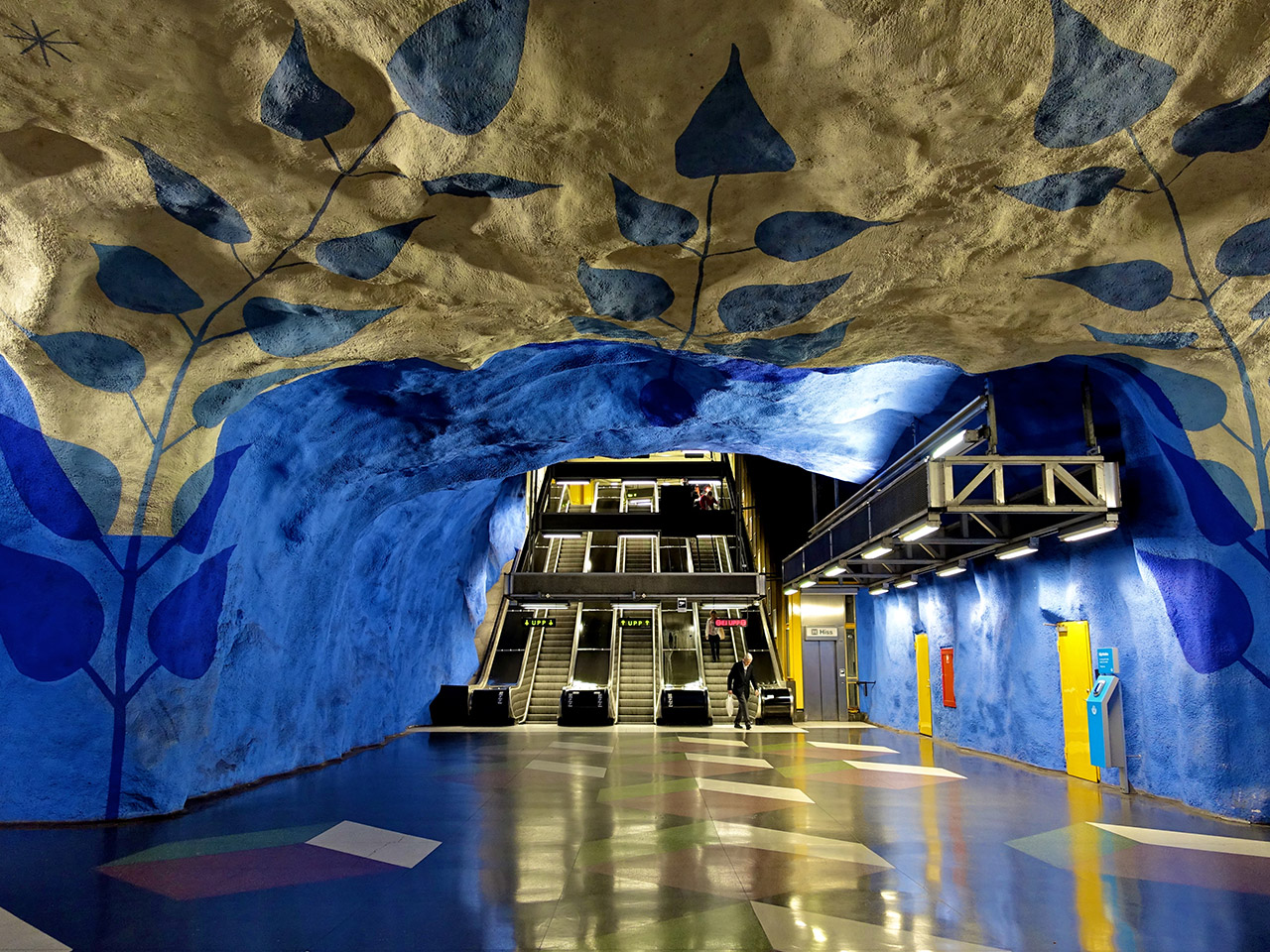 Get your disco on at the ABBA Museum

Nothing says Sweden than IKEA and ABBA – and in Stockholm, you can visit a museum dedicated entirely to celebrating the country’s most famous act. It’s all about national pride for this flamboyant and over the top musical group who captured a nation’s (and Europe’s) heart back in 1974. If you’re a fan of the Swedish foursome, and you want to thank them for the music, this is one place that you need to include on your Stockholm to-do list.

From replicas of their recording studios, to the actual costumes worn by the band themselves, the ABBA museum is the most comprehensive and extensive mix of ABBA memorabilia anywhere in the world. From ABBA karaoke booths, dance stations and even an opportunity to dance on stage with ABBA holograms, this museum is certainly interactive!

Right next door to the ABBA Museum is Skansen – the world’s oldest open air museum. It’s more like a cultural theme park than a museum, with hardly any glass cabinets and stale corridors. It’s all about immersing yourself in Swedish culture, and being outdoors, with an impressive collection of local wildlife, historical replicas, traditional food and culture, all in one spectacular setting overlooking Stockholm.

Located on the island of Djurgården, Skansen is a great family day out. Originally designed to give tourists an idea of what life in Sweden was all about back in the day, there are a collection of traditional houses and farmsteads, along with a fully operational glass-blowers’ cottage, a traditional Swedish bakery selling treats straight from the oven, and of course, a bank and post office. In the summer months, you can catch Swedish folk dancing performances and lessons in walking on stilts and traditional games.

There’s also plenty of authentic Swedish food. You can’t go past the traditional Swedish deer and wild boar meatballs. Served with potatoes and lingonberry, it’s pretty much Sweden on a plate.

Children will love the chance to get up close and personal with native Scandinavian animals roaming the parks. 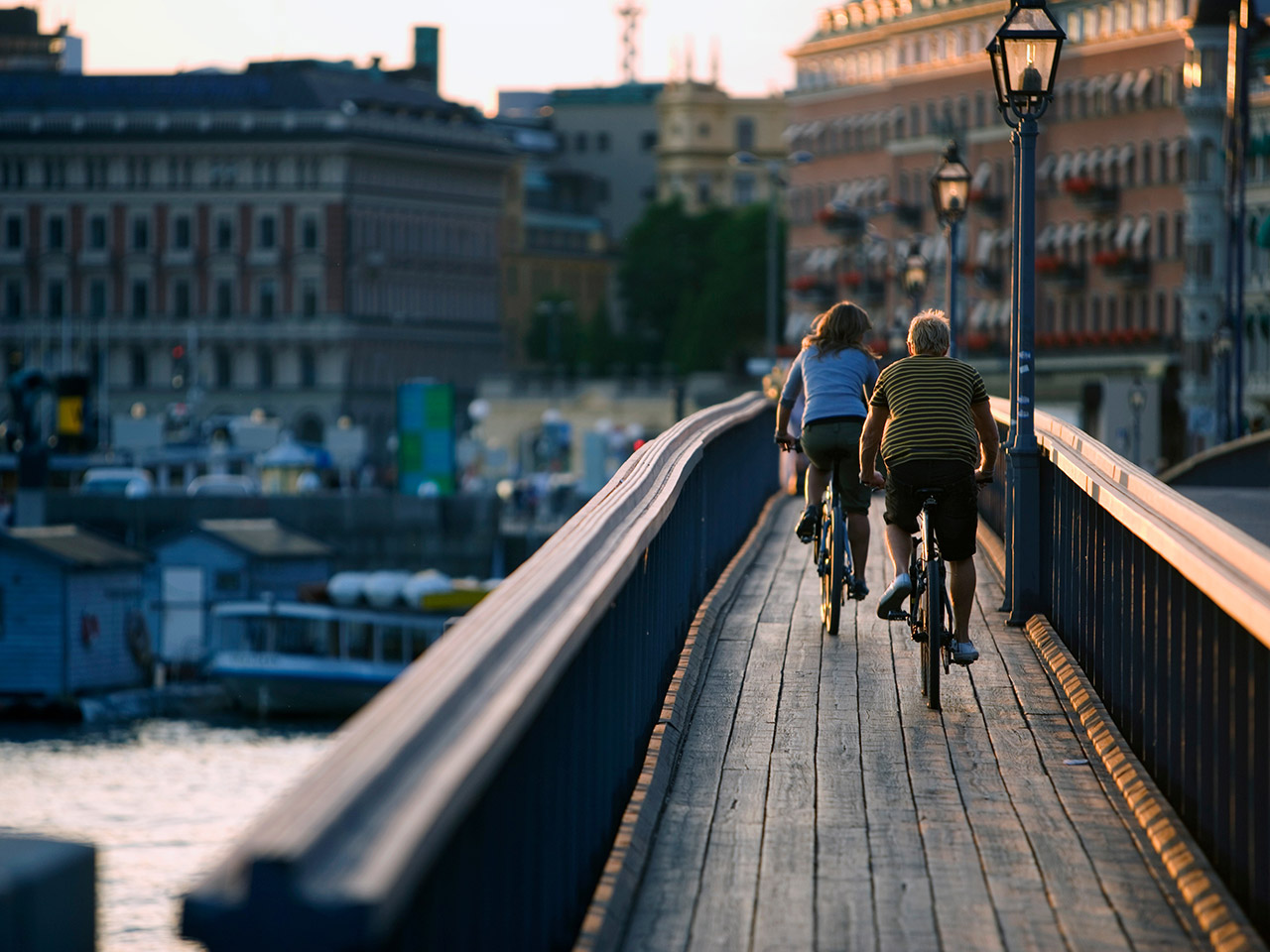 Get out on the water

If you’re looking to burn a few calories, stretch your arms and see the city from a totally different angle, try a kayak tour. A guide will take you to all of Stockholm’s natural landmarks, and you’ll be able to paddle to areas that wouldn’t normally be easily accessed if you were on foot.

For those that would rather explore the waters without working up a sweat, Stockholm’s GoBoats allow you to cruise through the islands in style. In a uniquely Scandinavian style. After packing a picnic lunch, a few bottles of your favorite bevvies, and rounding up some friends, you’re given a small motorized boat equipped with a picnic table to cruise around whatever parts of Stockholm you want. The boats are all made out of recycled materials, and are solar powered, and you don’t even need a special license to drive them.

An animal safari is potentially the furthest thing from your mind for a trip to Stockholm, but just a short drive from the city takes you into the beautiful Swedish countryside. Among lush forests and fields lie beautiful local inhabitants of all shapes and sizes. The best time to get out there is either first thing in the morning before sunrise, or at the end of the day. It’s during these hours where animals, such as elk, deer and moose can be seen in their natural environments.

Stockholm’s countryside also holds many impressive references to its Viking past. During your safari, don’t be surprised to come across ancient markings and rune stones in the majestic forests. It’s the perfect setting for a traditional fika and avid nature photographers will be in heaven here, with more than a few opportunities to take some stunning shots of these magnificent animals.

Personally, I believe that the best time of day in summer has to be Stockholm’s beautiful evenings. Come around 9 or 10 at night, the sky turns into a stunning shade of deep blue and gold, with the most magical part of a sunset drawn out for a few hours. And the locals seem to agree. The later hours of the day are really when the city comes to life in the summer, and every bar, restaurant and rooftop seems to be bustling with people enjoying the warmer weather and the surging summer energy in the air.

Being made up of so many different islands, rooftops with stunning views of the city are abundant. There are so many different restaurants and bars that allow you to get up over the city and watch the sun linger as it slowly descends late in the evening.

Stockholm’s is one of the most unique cities to visit during the summer. There’s a certain energy – a spark – that you’ll not find anywhere else in Europe. Sure, this city battles through some pretty fierce weather during the winter, but it’s almost forgotten in the middle of the year, when so much of the city comes to life, embracing the outdoors and the rejuvenating effects of the surrounding waters and endless sunshine. Stockholm is one of Europe’s hidden gem, and it’s one city that you cannot leave Europe without exploring.

Previous post Eat in Italy, Pray in India, and Love in Bali