Singapore Family Holidays: 6 Reasons Why Singapore Should Be On Your List - Expedia Australia Travel Blog

Singapore Family Holidays: 6 Reasons Why Singapore Should Be On Your List 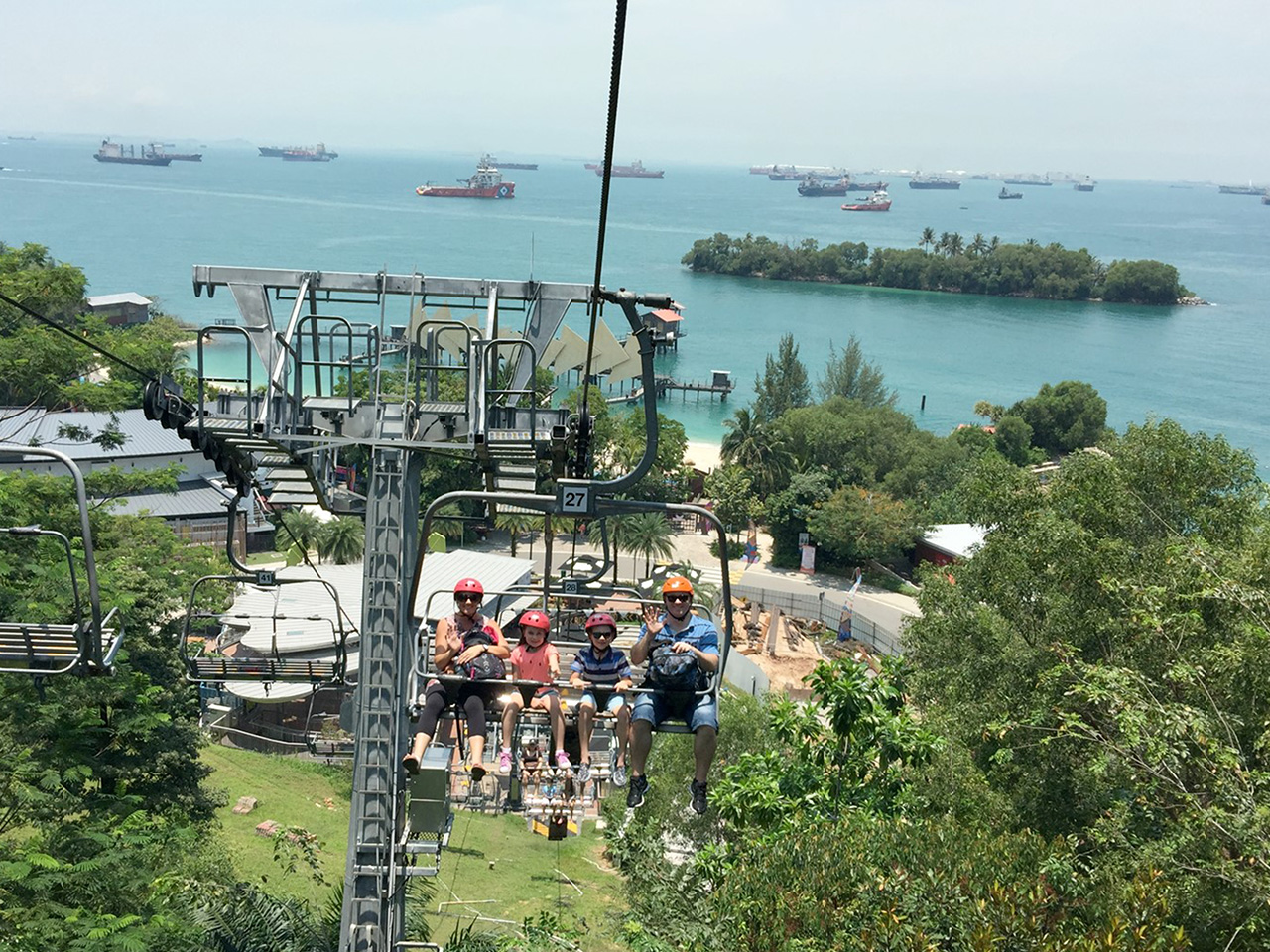 Singapore. Everyone has heard of it, most know it as one of Asia’s massive financial hubs, as a spot for stopovers and business trips. .But I suspect most wouldn’t have considered it as being a family friendly holiday destination.

That all changed after I recently visited Singapore for a few days with my wife Claire and two children Hugo (8, nearly 9 if you ask him) and Evie (6). I’d now wholeheartedly recommend it to anyone looking for an amazing family holiday!

Why? Let me tell you. Here are six reasons I think you should take your family to Singapore and why you’re going to love it as much as I did.

Reason 1: It’s closer than you think

Right now you’re probably thinking that 7 or 8 hours on a plane with children is hard work, honestly it isn’t that hard. We left Brisbane mid morning, it was Hugo and Evie’s first time on a plane, so they were super excited about everything. In no time at all, they settled in with a movie or three, some music, a little gaming action on an iPad and before they knew it, we were landing late afternoon local time.

Returning home, we left in the evening at 9PM local time so both Hugo and Evie were tired, not only because it was well after their normal bedtime but we’d had a full week of fun activities in Singapore. Within half an hour of taking off, both of them were snuggling down for a sleep and probably made it three quarters of the way home before they woke up, landing at breakfast time in Brisbane – a cinch!

TIP: Air Sickness
Make sure you have and use air sickness tablets with your children. We had them but didn’t use them as Hugo is normally fine with motion sickness. We thought we were in the clear, but the flight got bumpy and then the motion sickness started – it was too late! As a precautionary measure, grab a couple air sickness bags when you leave the plane – just in case!

As Singapore is situated very close to the equator, the weather is pretty stable all year round. You can expect temperatures between 25c and 30c most of the year. Unless you’re living in North Queensland, you’ll definitely notice the increase in humidity as it sits over 70% most of the time.

If you’re into the outdoors, you probably want to steer clear of late October through January as they are the wet season months where rainfall increases from around 150mm per month to over 250mm or an average of 25 days per month are wet in some way.

TIP: Keep Hydrated
The all year warm weather and much higher humidity that most are accustomed means it’s important to stay hydrated. We stayed at the Swissotel Merchant Court and they were happy to provide us bottles and bottles of cold drinking water each time we left the hotel – you just need to ask!

Reason 3: Everything is close by

Singapore as a country has approximately the same sized land area as the Gold Coast, but with a population of around 5.5 million. The relatively small land area and higher population means Singapore delivers great public transport – there are a lot of different train lines, plenty of buses and the taxis are cheap as well.

While visiting Singapore, I was expecting to see huge volumes of traffic and congestion similar to Australia’s capital cities. I was pleasantly surprised. It turns out motor vehicles are extremely expensive. How expensive you ask, a VW Polo could set you back north of SG$85,000 (which is approximately the same dollar value in Australian dollars!) wowzer!

In the week we visited Singapore, we tracked across most corners of the city and I don’t think it took more than 20 minutes to get anywhere – heavenly compared to Brisbane, Sydney or Melbourne traffic!

Singapore is a melting pot of cultures, so like most developed cities you can eat virtually all cuisines without having to travel too far for it. In our time in Singapore, we ate outstanding food for dinner and visited China Town for what might be the best Asian food I’ve ever eaten.

Most of the food we ate was western cuisine, as Hugo and Evie aren’t that adventurous from a food stand point (the battle continues, hah!). Despite that, we landed at some exquisite cafes and restaurants. One morning we ate at Common Man Coffee Roasters and without a doubt, had the best pancakes I’ve ever eaten. Don’t believe me, check out this description and see if it changes your mind:

That right there is happiness on a plate, ohh and the coffee was outstanding as well!

For lunch one day we stopped by Open Farm Community, Claire had saffron carnaroli risotto with chorizo, cuttlefish and green peas, while I had a braised lamb shank with couscous, olives and capers. In both instances the food was wonderful, Claire rated it as the best risotto she’d ever eaten and has referred to it several times since returning to Australia!

Reason 5: Amazing things to do

The activities available in Singapore is where you’re really going to build memories that are going to last a lifetime for you and your family!

Singapore Tourism Board has actually released a study, the first of its kind, that looked at how Australian families reacted emotionally to different experiences in Singapore. They used EEG Headsets to measure electrical brain activity at different attractions – giving them a guide to the family’s emotions. Fun, happiness, stress, interest, and importantly, excitement and relaxation! The results are pretty cool – turns out the key to a good holiday is to experience locations that are unique to that destination, like the Gardens by the Bay. Plenty of parents would avoid galleries and museums, thinking their kids wouldn’t have the patience – wrong! The study showed the kids and adults had peaks of “interest” at education-based activities. My pick is definitely KidZania, where kids get to play grown up in a wide variety of career simulations.

To give you a taste of what is available in Singapore, we managed to get through the following in a few days and I we could have kept going if we had more time:

The highlight that I think was a once in a lifetime experience was, at SIngapore Zoo. We had breakfast with a family of orangutans, fed giraffes by hand, got to see a whole variety of African pride animals like lions, tigers, pumas, rhinos, the cutest little monkey named a Tamarin and we fed elephants by hand, and much more – just incredible!

Gardens by the Bay was also wonderful. By complete happenstance we arrived the week that the cherry blossom trees flowered within the Flower Dome. I’ve always wanted to travel to Japan to see the cherry blossom flower and now that I’ve seen it first hand, I completely understand the wonder and delight; Japan is now firmly on my must-travel-to destinations.

It didn’t matter where we went while in Singapore, the people were wonderful. No one expects to run into unfriendly people when they travel but it does happen. In Singapore, at least in all the places we visited, the locals were great and it just made our time in Singapore even better.

Our trip to Singapore was the best family holiday we’ve ever had. My wife Claire and I, along with Hugo and Evie had an absolute blast. My only complaint is that we weren’t there for another week to explore more, maybe take a couple day trips to Malaysia since it is close by as well.

You definitely need to put Singapore on your family holiday destination list, you’ll love it! And for more info on Singapore, check out www.yoursingapore.com

Expedia compensates authors for their writings appearing on this site, such compensation may include travel and other costs. Al and his family were guests of Your Singapore

Next post Things to Do in Sydney: The Ultimate Guide