8 reasons Seattle is one of America’s coolest cities 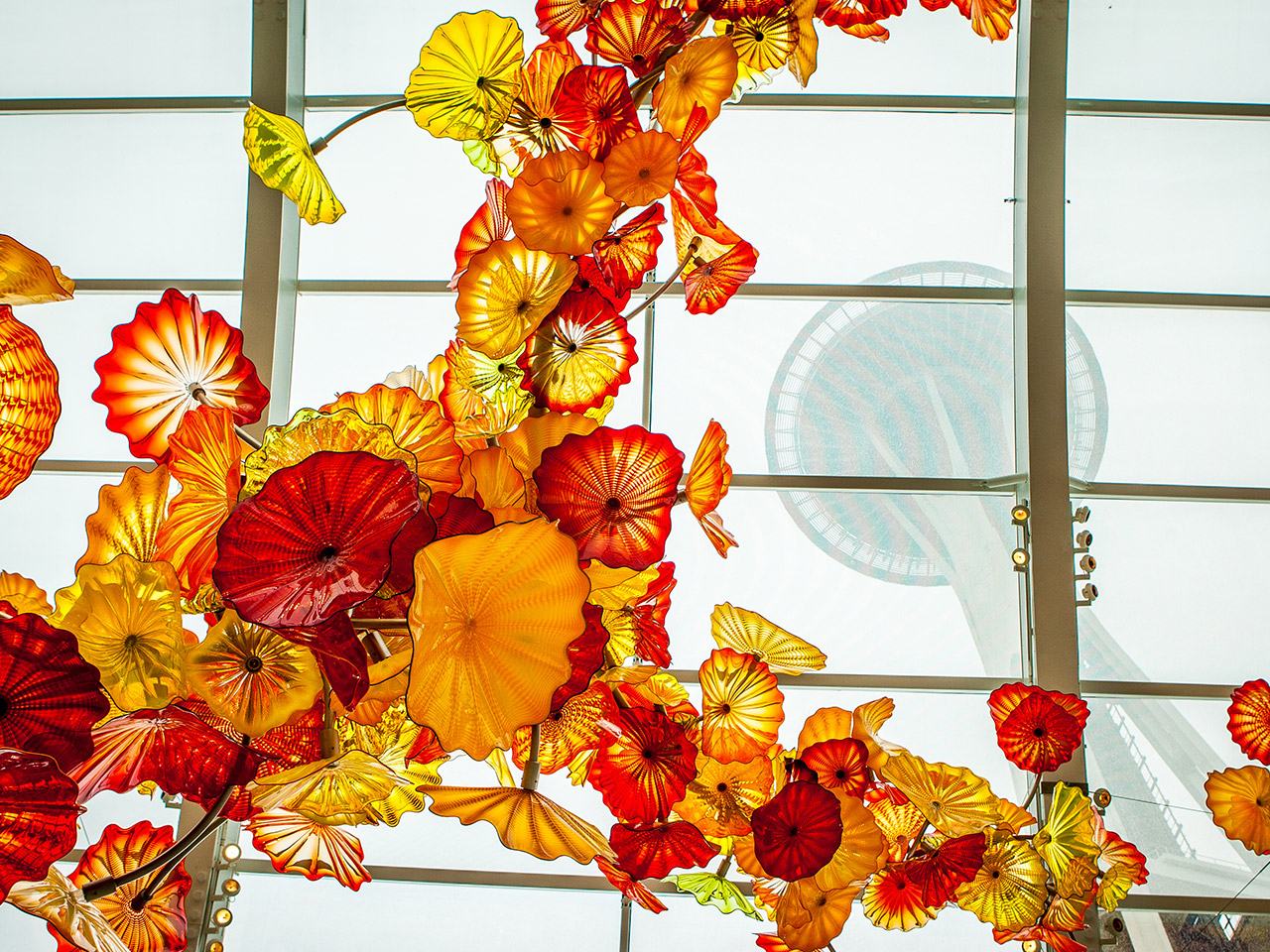 When it comes to American cities, the Seattle skyline is almost as famous as the Big Apple. From Sleepless to Seattle and Greys Anatomy, its mix of skyscrapers, Space Needle and snowcapped mountains have formed the backdrop for plenty of movies and TV shows.

Once you’re on the ground in Seattle, it’s easy to understand why the film crews come rolling in all the time. A three hour flight from Los Angeles, and you’re touching down in a city that’s surrounded by water and at the footsteps of National Parks and Forests. Expedia’s Aussie travellers usually spend 2-3 nights in the city. Aside from the movie sets, Seattle is also home to big business – companies like Microsoft and Boeing have offices scattered around town. A trip out to the cavernous Boeing Factory is a neck-craning insight into how commercial aircraft are manufactured for airlines around the world.

Whether you’re on a business trip, just passing through or here for an extended stay, here’s our guide on how to spend 24 hours (not sleepless) in Seattle.

Whether it’s food, wine, coffee, culture, architecture or all of the above, Seattle is a city where there’s a little bit of everything for everyone. Old meets new, with some of the city’s most famous landmarks sitting side by side with budding businesses. Start your day early down at the Pike Place Market. Looking out over Elliott Bay, the markets began life as a group of wagons back in 1907. These days, the arcades are home to around 500 stalls selling everything from fresh fruit to smoked hazelnuts. Meander through marvelously fragrant flower arcade towards Pike Place Fish Co, where you’ll catch a glimpse of fins flashing in the air as the fishmongers throw salmon across the stalls. Doughnut Company’s bite sized daily dozen come piping hot from the deep frier and are a great breakfast treat.

When you’re finished at the markets don’t forget to wander back along Pike Place, which runs parallel to the market – you’ll pass fromageries making fresh cheese in the windows and bolt hole bakeries selling gigantic gluten free cinnamon scrolls. Number 1912 Pike Place is perhaps the most famous resident. Home to the world’s first Starbucks, you’ll find people lining up out the door from the early hours for the chance to see the brand’s original logo and to pick up a coffee in a limited edition Pike Place cup. A stop here is a right of passage for many dedicated Americans. 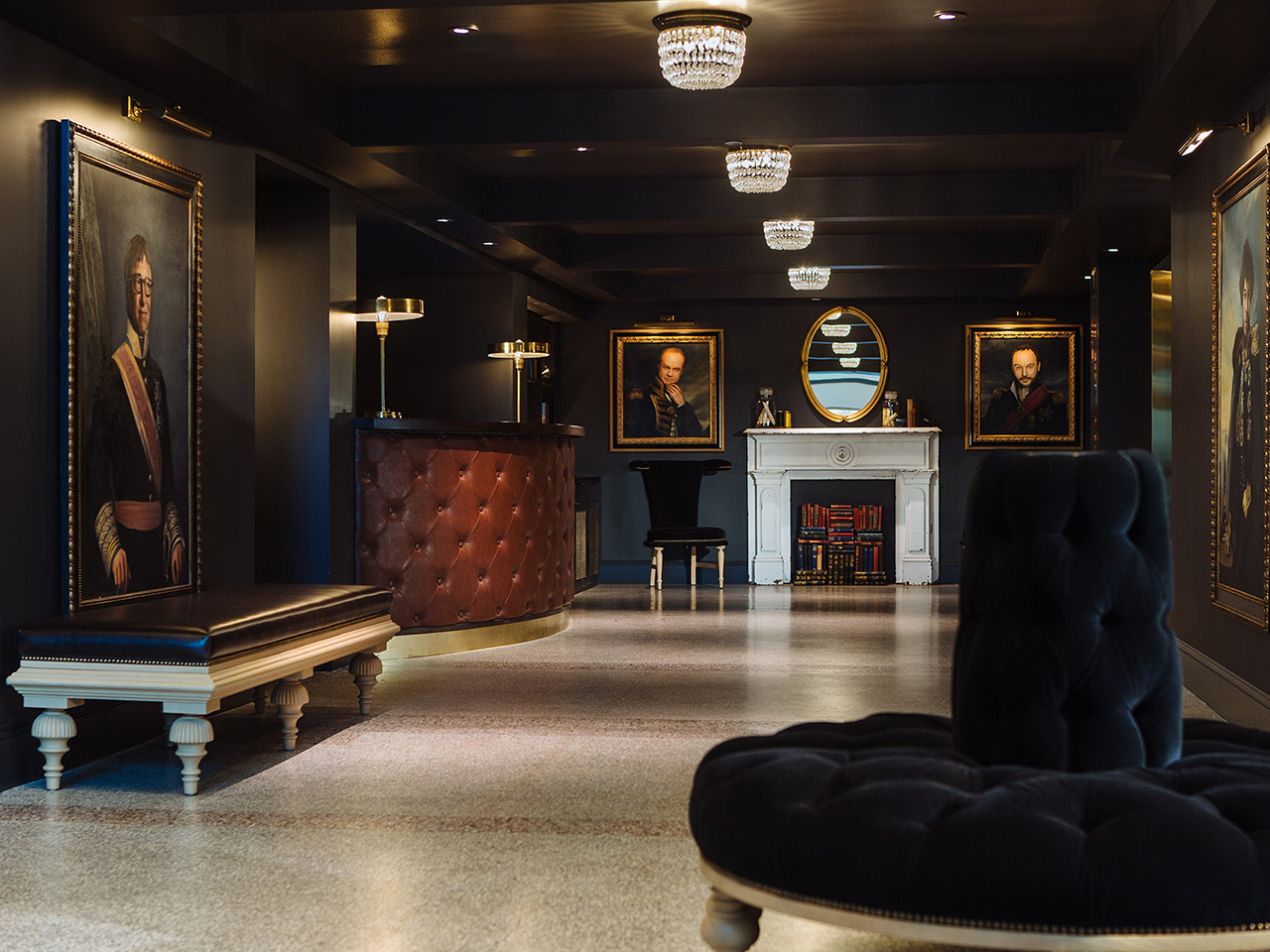 After a caffeine hit, head over to the Seattle Centre. The site of the 1962 World Fair, this is the tourist triumvirate – the Space Needle, EMP Museum and Chihuly Garden and Glass Museum are all within walking distance of each other. Look up, and up and up, at the Space Needle, which actually inspired the Jetsons, not the other way around, before heading over to EMP. You won’t miss the Experience Music and Performance Museum – its rippling multicoloured façade is made up of 21,000 aluminum and stainless steel sheets and was designed by Frank O. Gehry to mimic the energy of music. Microsoft co-founder Paul G. Allen is behind the museum’s concept – a homage to all things pop culture. You’ll find guitars strummed by legends like Kurt Cobain in the Guitar Gallery, Luke Skywalker’s light saber and Back to the Future hover boards in the Sci-Fi Hall of Fame and rooms full of kitsch at the Hello! Exploring the Supercute World of Hello Kitty.

A very different type of art form is on display over at the Chihuly Garden and Glass Museum. The work of Washington State’s world famous glass artist Dale Chihuly is showcased in all its glory at this intimate space. Giant glass globes seem to float in space in darkened rooms and giant draping flowers soar above you in a glass atrium – this space is as spectacular as it sounds. Do not skip it. The Seattle City Pass gives you access to most of these great attractions and you’ll skip the ticket queues. 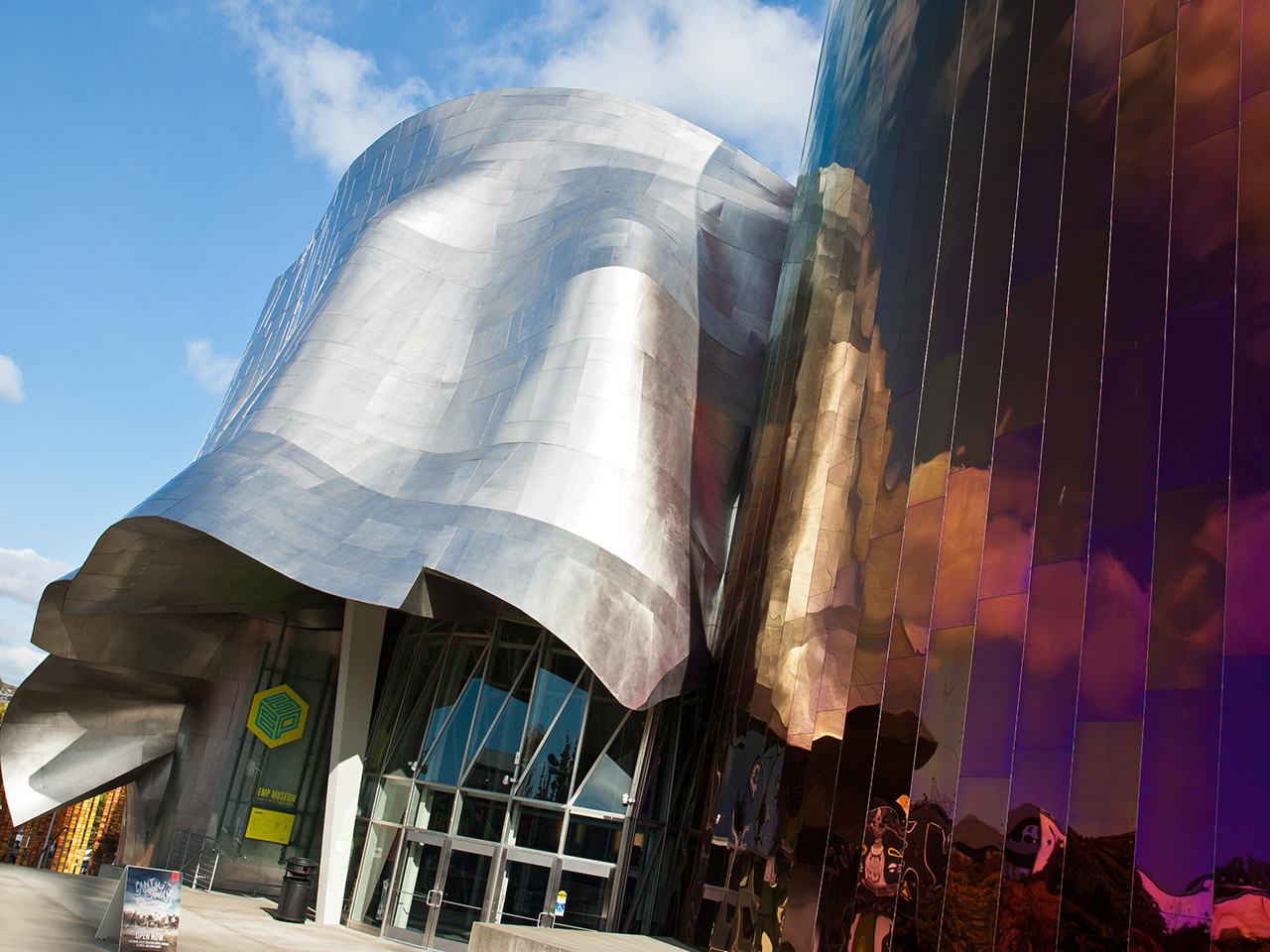 As soon as you say Seattle, aviation fans will say “Boeing”. The famous Boeing Factory dates back to the 1960s but Boeing was formed by William Boeing back in the early 1900s. The Museum of Flight is a giant time capsule of all things flight – from test space shuttles and twin engines to World War battle craft and space age drones. Spend a few hours perusing the machines indoors before heading outside to see a Concord and the old Air Force One. The Boeing Factory tour over in Everett is a must do for any avid aviation lovers – the building is so big clouds form at its ceiling.

Seattle’s fresh supply of fruit and vegetables has encouraged a foodie culture centred around locally sourced, fresh ingredients. Portage Bay Café’s organic breakfasts have a cult following – the towering French toast doesn’t look too healthy but rest assured, the motto here is “Eat Like You Give a Damn”. And when you pile them even higher with berries from the self-serve berry bar, the hot fudge sauce gets cancelled out. Right? Vegan pancakes are a slightly more sedate affair if you’re feeling virtuous. There are now four Portage Bay café locations scattered around the city – but still be prepared to queue on weekends! 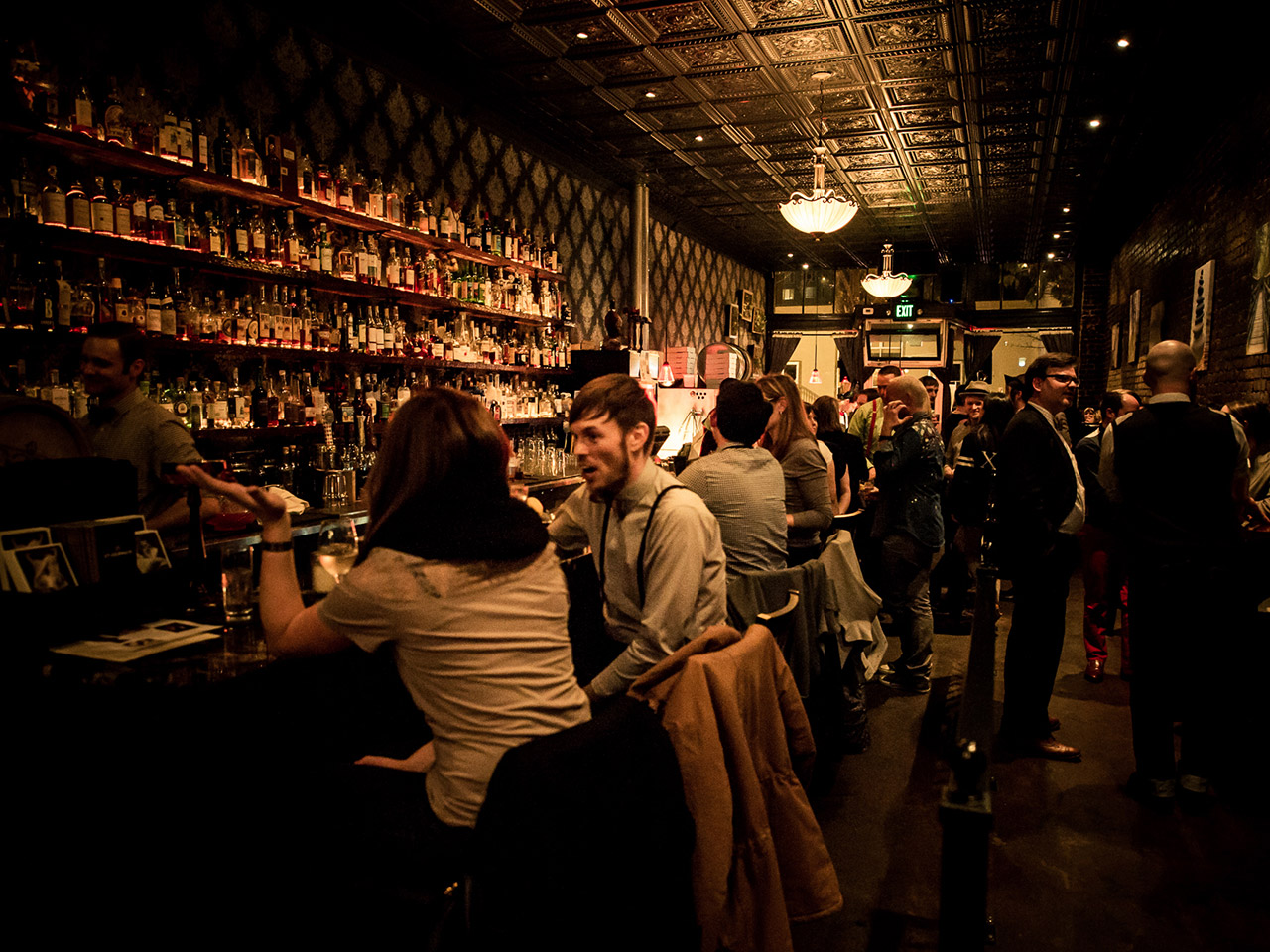 For a late night feast, join the line outside Rocco’s Pizza – the downtown pizzeria is squeezed into a converted terrace on trendy Second Avenue and is always pumping. Don’t be fooled, this is no quick and easy carb fest. The pizzas at Rocco’s have a reputation – big and beautiful, they’re served deep dish style and are made using sauces, dough, ricotta and sausage that’s made on site, from scratch. Local family farms and artisan providores stock the pantry at this trendy eatery, where the wood fire oven is never empty. Settle into a booth at the back and bring your appetite – these pizzas are bigger than big. You can order by the slice, but it’s more fun to order half and half so you can try meat meat and more meat with the Three Little Piggies and the famous Stacey & Tina’s Night Out, which adds a little something extra with banana peppers and an olive oil base. 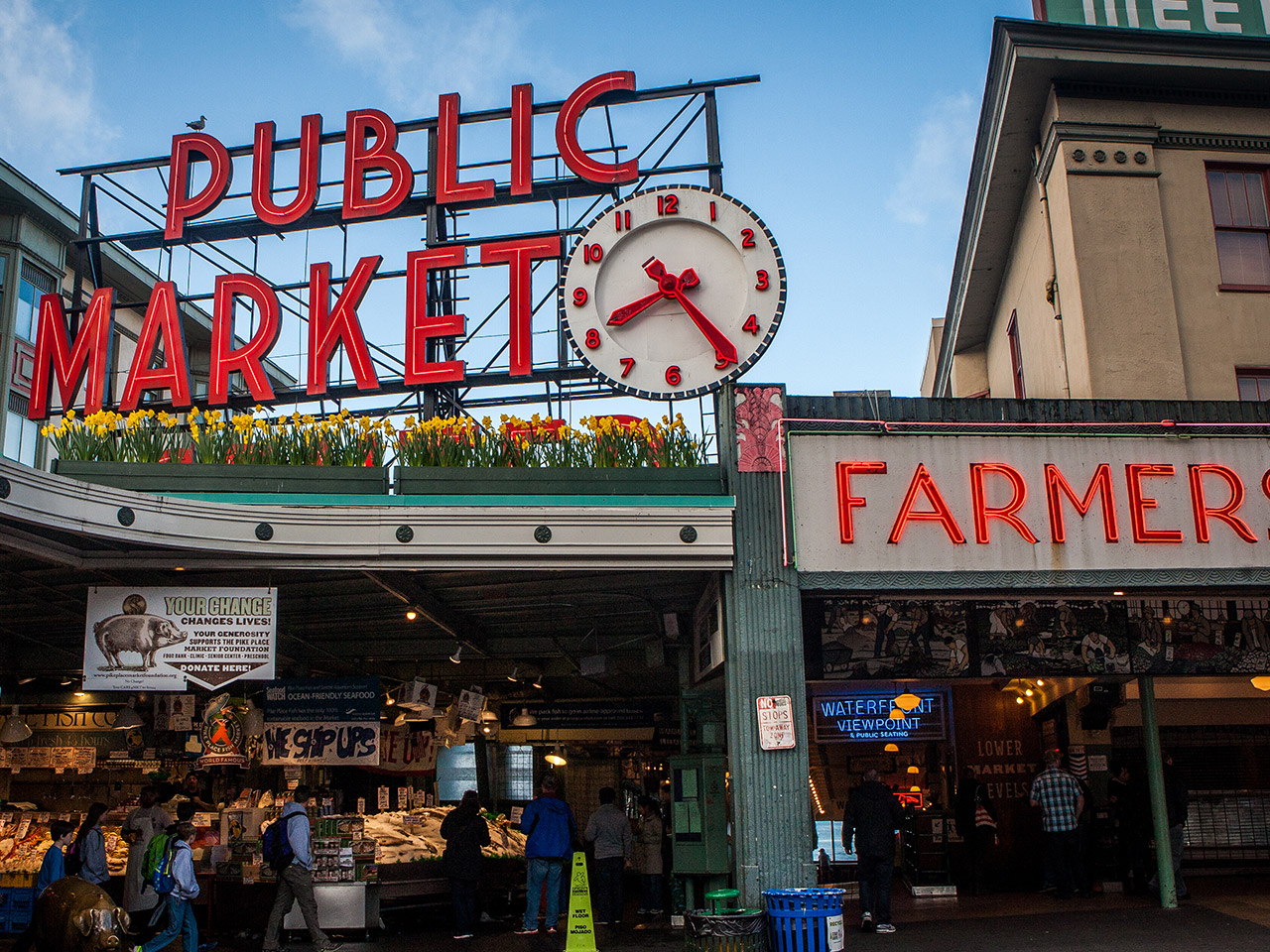 Sleep with the stars

Catering to a plethora of business travellers, Seattle has plenty of mainstream hotels – Hilton, Hyatt, Marriott, Fairmont, they’re all there. But, there’s also a growing group of boutique, bespoke hotels where the focus is on quirky details. Take for instance the Palladian. This 97 room Kimpton Hotel sits just on the edge of the historic downtown district and pays homage to famous Seattleites in an unusual way. Look closely at the dark and moody lobby’s artworks – the old world portraits lining the walls have very modern subjects. Jimi Hendrix, Bill Gates and Kelsey Grammer have been immortalized on the walls. Then there’s the bed cushions. You’ll “wake up” next to heartthrobs like Leonardo DiCaprio and David Bowie – just for a bit of fun. You’ll get to taste the other local exports during the complimentary whiskey and wine hour in the lobby.

At Hotel Max, it’s all about craft beer, with free local craft brews available for you to try during craft beer hour. The hotel’s music-themed lobby bar pays homage to Sub Pop, the seminal 80s record label that’s still going strong today. The Sub Pop and Hotel Max partnership continues through to an entire floor of the hotel, whose room shave their own record players and bespoke vinyl collection for guests to play during a night in.