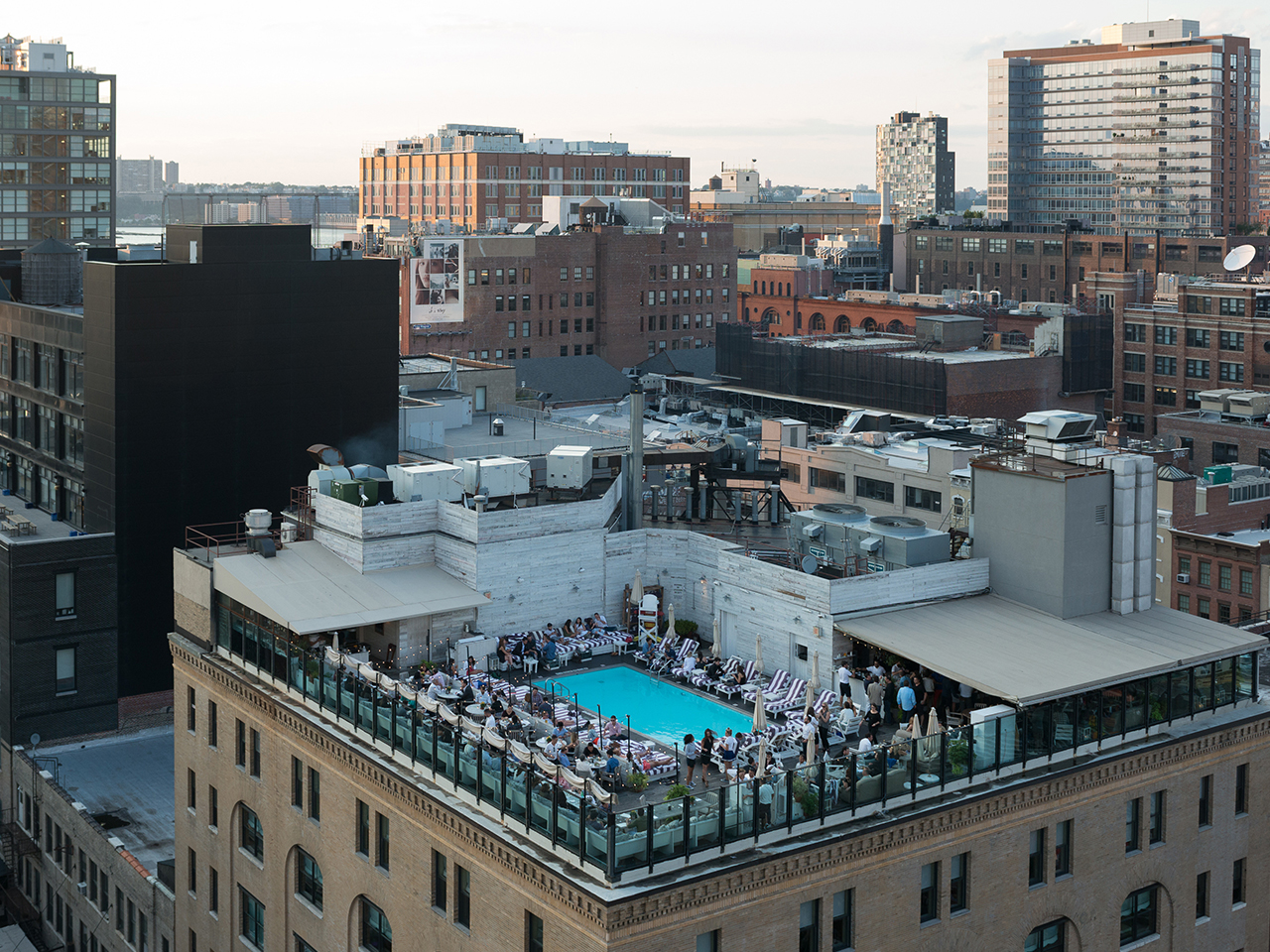 Picture this. You’ve spent a sweltering summer’s day exploring the Big Apple, soaking up the buzz in this biggest of big cities, and now it’s time to retreat to your New York accommodation to refresh and recharge for a night gallivanting about the city that never sleeps.

Forget about lowering your core temperature with a cool shower then collapsing onto the bed for a quick disco nap, it’s into your togs and up to the hotel’s lofty top floor for a dip in the exclusive rooftop swimming pool.

This is not a drill. There are several New York hotels boasting a rooftop pool that grant guests special access to Gotham’s most valuable summertime real estate and here are a few favourites.

When the Hotel Indigo Lower East Side opened in 2015 there was much to tempt travellers that appreciate a sense of place in their holiday accommodation.

There’s a mural on the lobby ceiling, unique wall art in each guest room by legendary neighbourhood street artist Lee Quinones, and street-art motifs dot the hotel to mirror what guests see in surrounding streets.

Another surprise was the heated swimming pool on the 15th-floor terrace which promises premises for guests to simply sit and take in the view after a dip, enjoy a Saturday morning yoga session during summer, or indulge in a feast from Mr Purple which is the Hotel Indigo LES’ loft-like eatery.

A terrace 10 storeys above a Chelsea street, beside the High Line and a block from the Hudson River, is the place to find the swimming pool at Hotel Americano.

The terrace combines with a trendy Mediterranean bar and restaurant to make a desirable drinking-and-dining venue called La Piscine while daybeds provide places to linger between swimming and snacking.

The building is wrapped in a sparkling steel-mesh cladding to reflect the industrial feel of the West 27th Street neighbourhood, the pool feels like an exclusive club, and guest rooms are more serene spaces crafted to look like an urban ryokan with wooden platform beds. 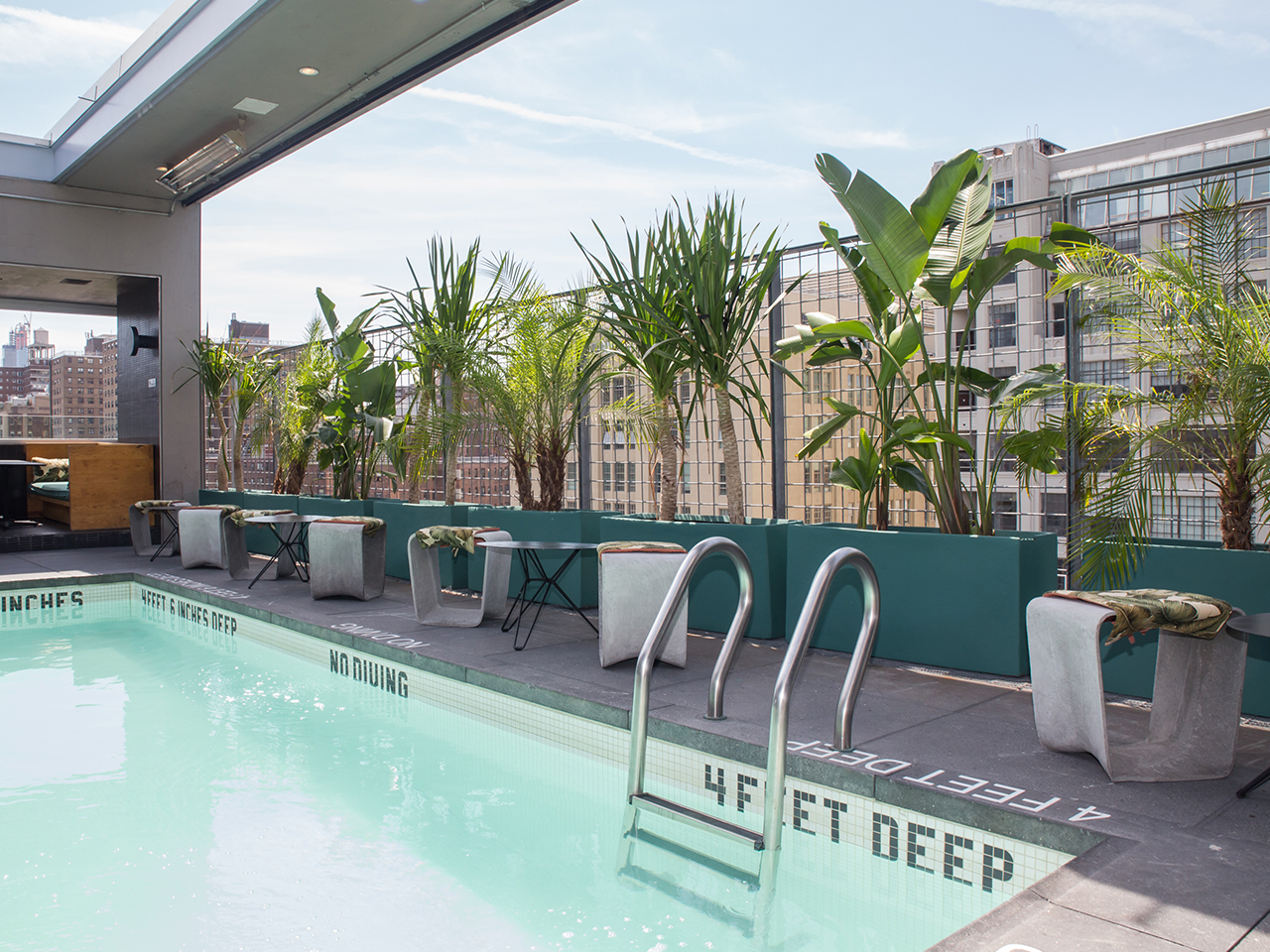 A Warhol-like portrait of Andy Warhol covers the bottom of the Sixty LES swimming pool and while this swanky veranda is regularly reserved for hotel guests the space does host high-voltage parties during the sizzling season with DJs, waiters serving signature cocktails, and pop-up shops selling designer threads.

The Beach – that’s what the folks at Dream Downtown call their rooftop deck – brings a dose of French-Riviera chic to Chelsea with the swimming pool complimented by a white beach made from imported sand, cabanas, rows of blue lounges, a bar serving slushies spiked with spirits alongside a seasonal menu, and DJ booth.

The pool doesn’t sit on the hotel’s top floor, but right above the lobby with porthole-like windows providing those checking in with a view into the blue, and some of the loft-style suites designed to serve the “urban traveller” peer onto The Beach. 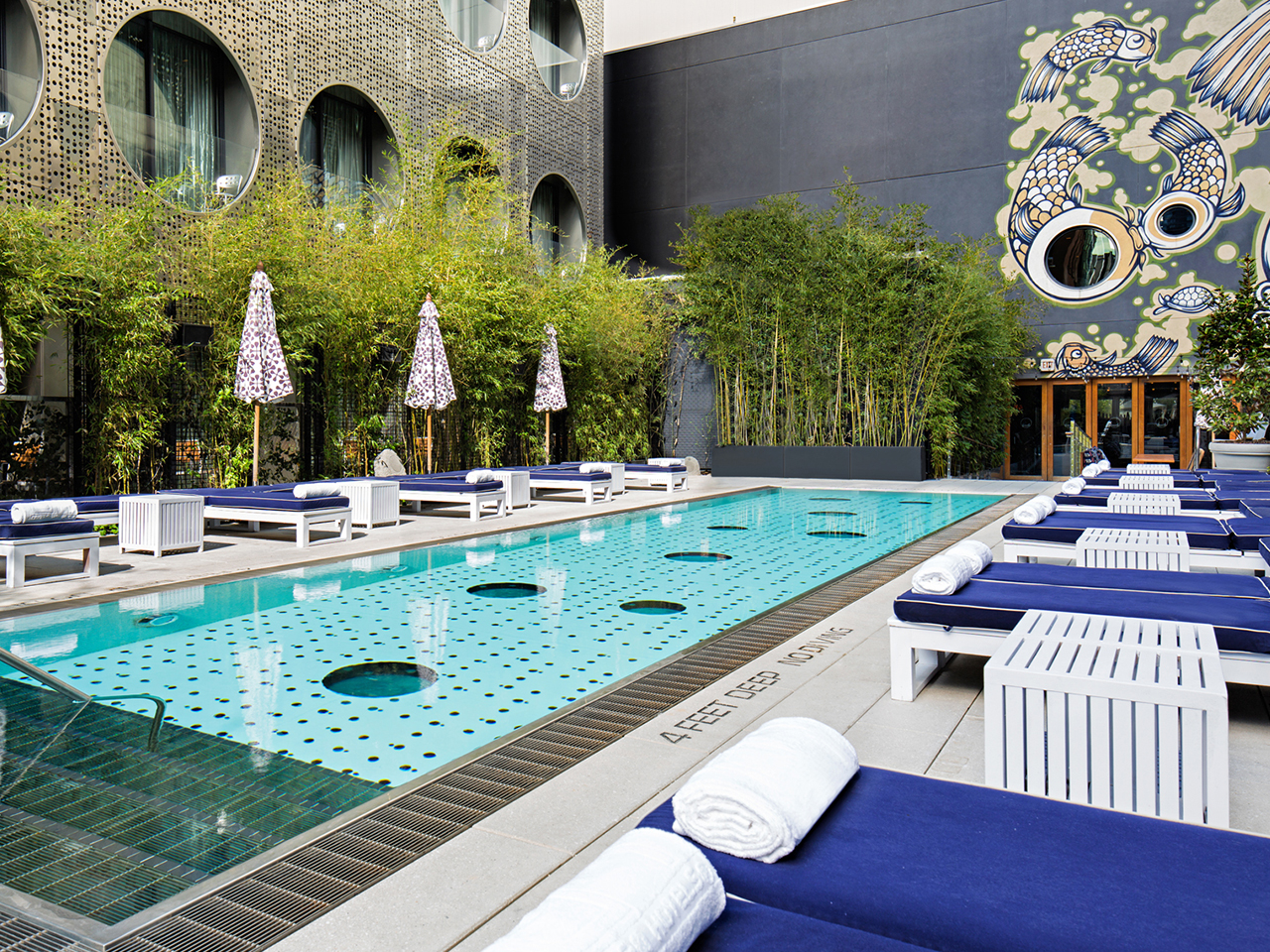 This 18th-floor pond is more plunge pool than a place to swim laps and while it’s a retreat for guests on weekdays – a location to take yoga classes by the blue or soak in vistas across Tribeca and Soho – the spot heats up on summer weekends when locals and guests cram the deck during parties hosted by The James’ hip rooftop bar Jimmy.

New York’s newest boutique address 1 Hotel Brooklyn Bridge only opened on a plot beside the East River in February but the address is already being celebrated for public spaces packed with the work of local artists and guest rooms – many catching a view of the Manhattan skyline – channelling urbane industrial style.

The 11th-floor terrace of the Brooklyn Heights building is home to an infinity plunge pool set in what’s described as a “lush retreat of native plants”. The adjoining bar and lounge are furnished with rocking chairs and fire pits that let guests savour a view stretching from the Brooklyn Bridge to Statue of Liberty during warm days and chilly nights. 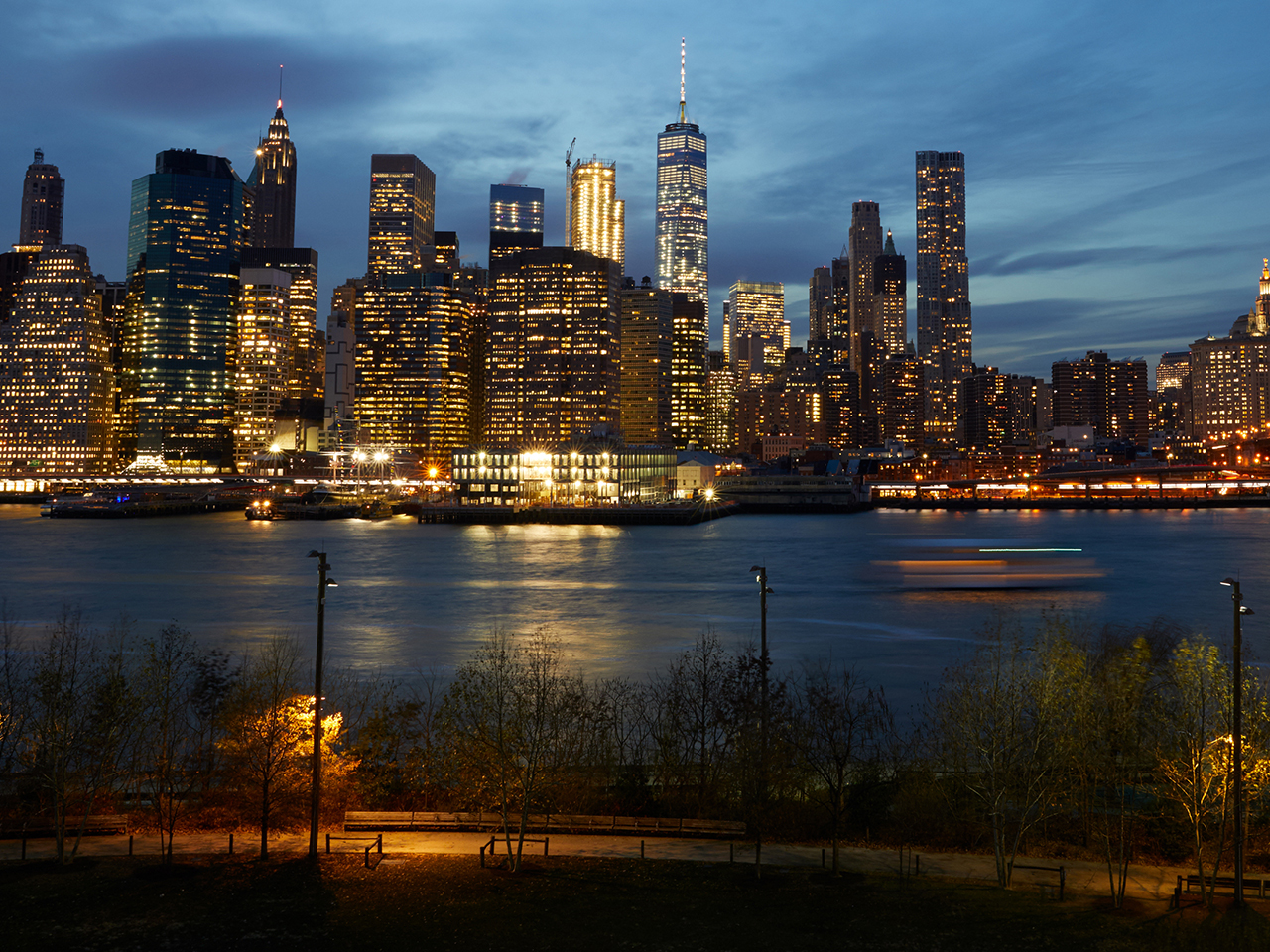 Midtown’s Le Parker Meridien lets guests “swim on the top of the world” with the rooftop pool surrounded by walls of windows that not only let the light flood through but deliver a panorama across Central Park to Harlem.

While the swimming pool is reason enough to head up to the Meridien’s highest floor – and to stay there with snacks served to those reclining after a splash – there’s also an outdoor sun deck for guests keen take in the fresh air high above street level.

While the Mandarin Oriental’s pool doesn’t technically sit on the hotel’s rooftop – it can be found on the 36th floor, between the sky lobby on level 35 and guest rooms above – the view on offer earns it a place on this list with guests able to gaze across the Hudson River as they dry off after doing their daily laps. 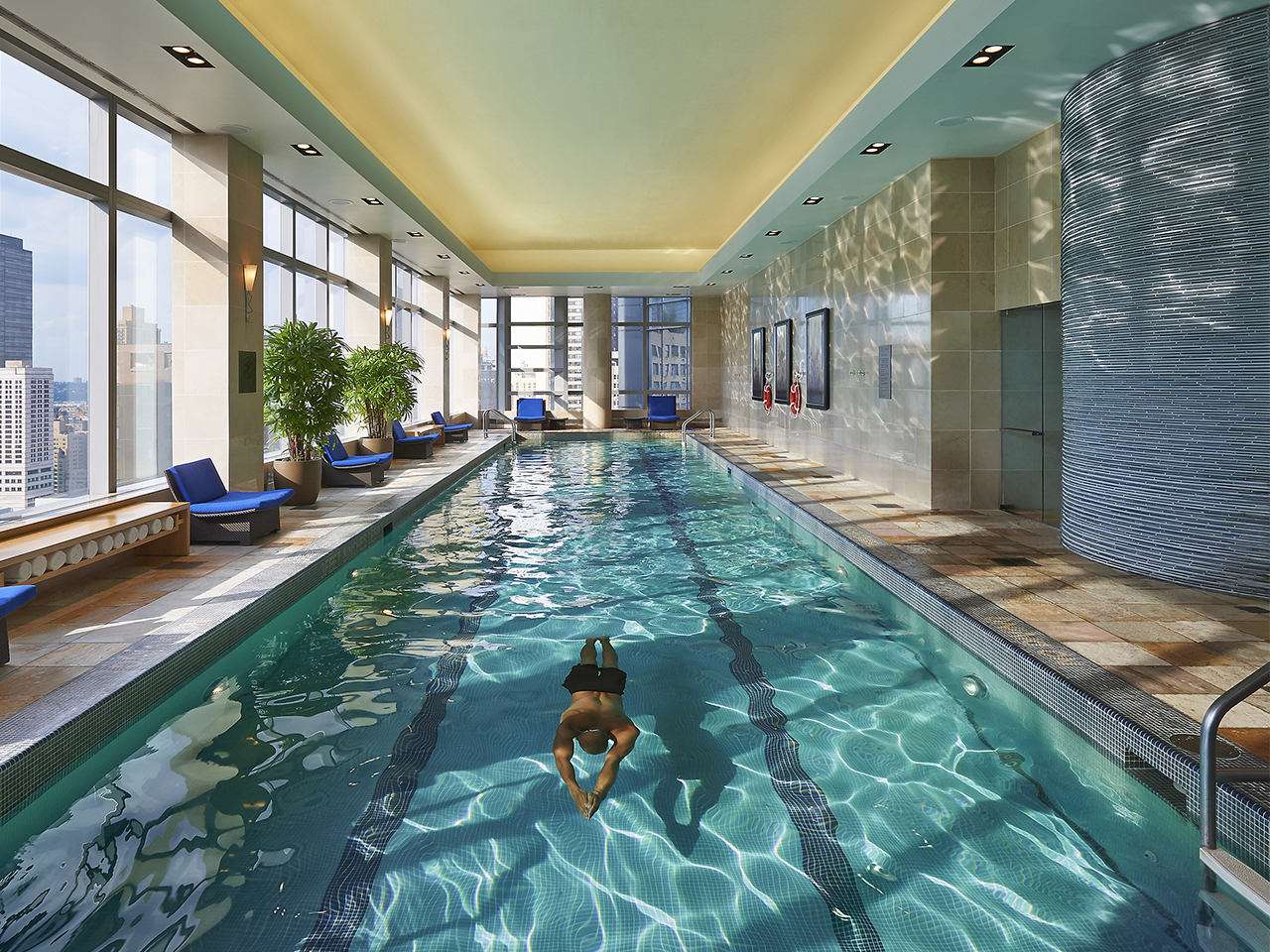 While most of New York’s rooftop pools sit at the summit of new structures the swimming spot at The Empire Hotel tops a building that first opened in the 1880s, was redesigned in 1923 when the iconic red sign was put in place, and restored in 2008 to reinstate a bygone elegance to the every corner of the address.

The Pool Deck at The Empire sits on the 13th floor, a seasonal sun-drenched terrace above Broadway, with the space the exclusive domain of hotel guests.

The McCarren Hotel & Pool occupies a plot in Williamsburg – a dynamic Brooklyn neighbourhood on what the locals call New York’s Left Bank – with the heated pool not only one of the biggest in the five boroughs but a destination that’s making a name as a summer foodie favourite.

Snacks are served “ballpark style” in hawker boxes beside the water and an ice-cream cart circulates to distribute designer gelato while guests bop along with music played by a roster of live bands. 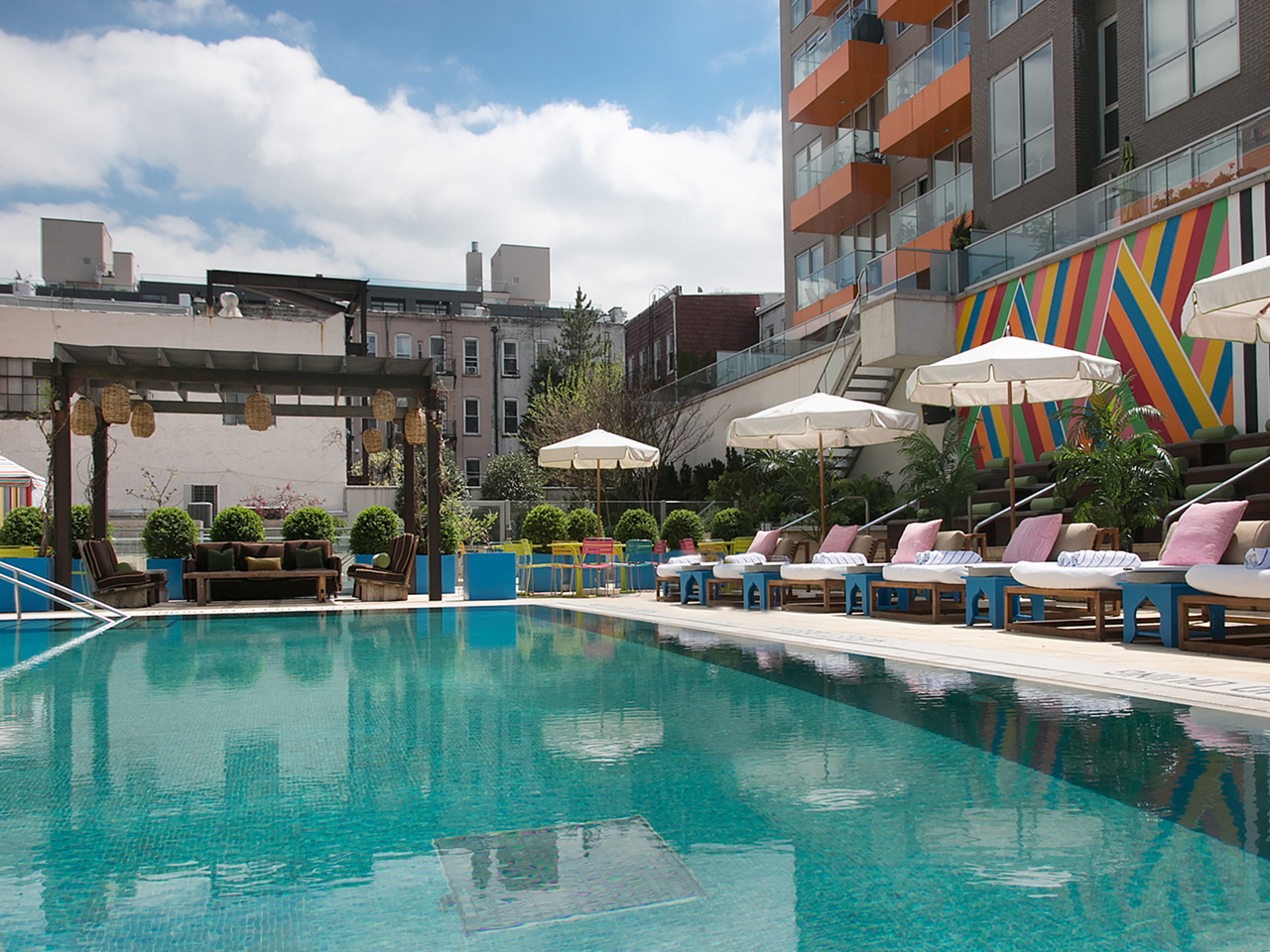 As the world's largest online travel company, we'll try to point out things that we think you'll find interesting and relevant. We like sharing the experiences of our people and customers to help you discover more and make the best choice.
Twitter Facebook Google Instagram

How to spend a weekend in Brooklyn