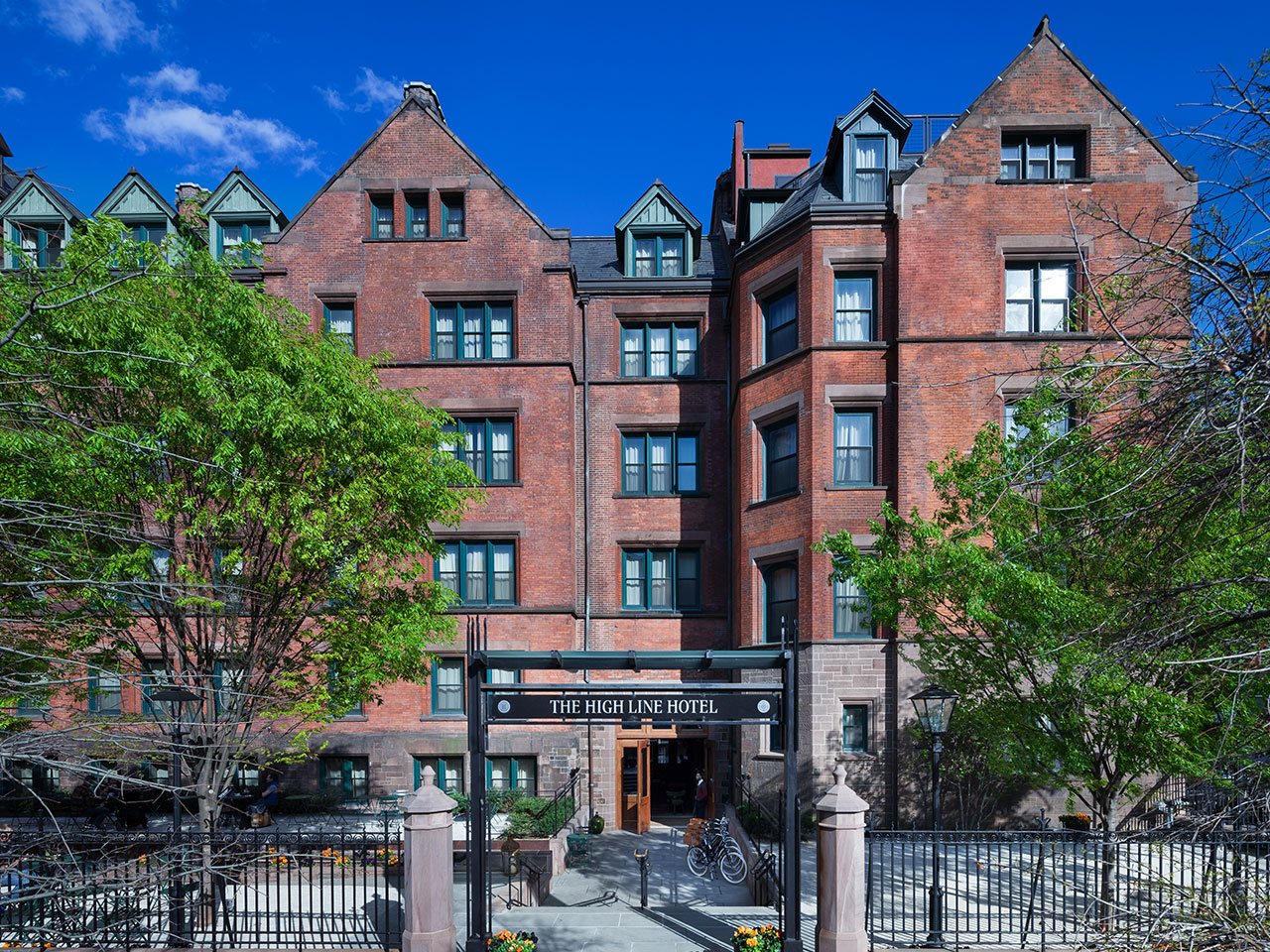 When it comes to New York accommodation there’s something to satisfy every travel whim – from budget boltholes to international icons – but it’s the new breed of boutique beauties that most excite savvy travellers.

Escape the Big Apple tourist trail and book a hotel in one of the city’s five lively boroughs, where you’ll get to live the NY lifestyle for a few days.

There are hundreds of New York hotels to choose from, but here’s our guide to the big city’s best boutique bases.

The High Line Hotel in Chelsea’s dynamic Gallery District is a dapper estate occupying a former church seminary built back in 1895.

Guests now sleep in stylish rooms that were once dormitories crowded with budding Episcopalian priests, a new outdoor restaurant is ready to open in the front garden, and the Intelligentsia coffee corner morphs into a full-service bar every evening.

Row NYC is plum in the middle of Midtown with the savvy hotel’s name inspired by the Eighth Avenue address which guarantees “front-row views” across Manhattan’s beating heart. The building is home to Time Square’s only food market, City Kitchen, where guests can sample signature dishes gathered from around the metropolis.

The homage to New York continues through guest floor colour schemes with the red, yellow, green, orange and blue rooms linked to the colours of the city’s subway lines and nearby neighbourhoods like Soho and The Village are honoured in the hallways.

Occupying a room at 1 Hotel Central Park is as close travellers can get to glamping in New York’s green heart. This luxe eco-friendly address – just one block from The Pond on East 58th Street – boasts everything from a living green wall on the façade to intelligent motion sensors activating guest-room lights.

Bed headboards made from reclaimed barn wood, complimentary organic and seasonal fruit served to guests, and 24,000 plants hanging from the lobby ceiling are just a few other planet-friendly touches. 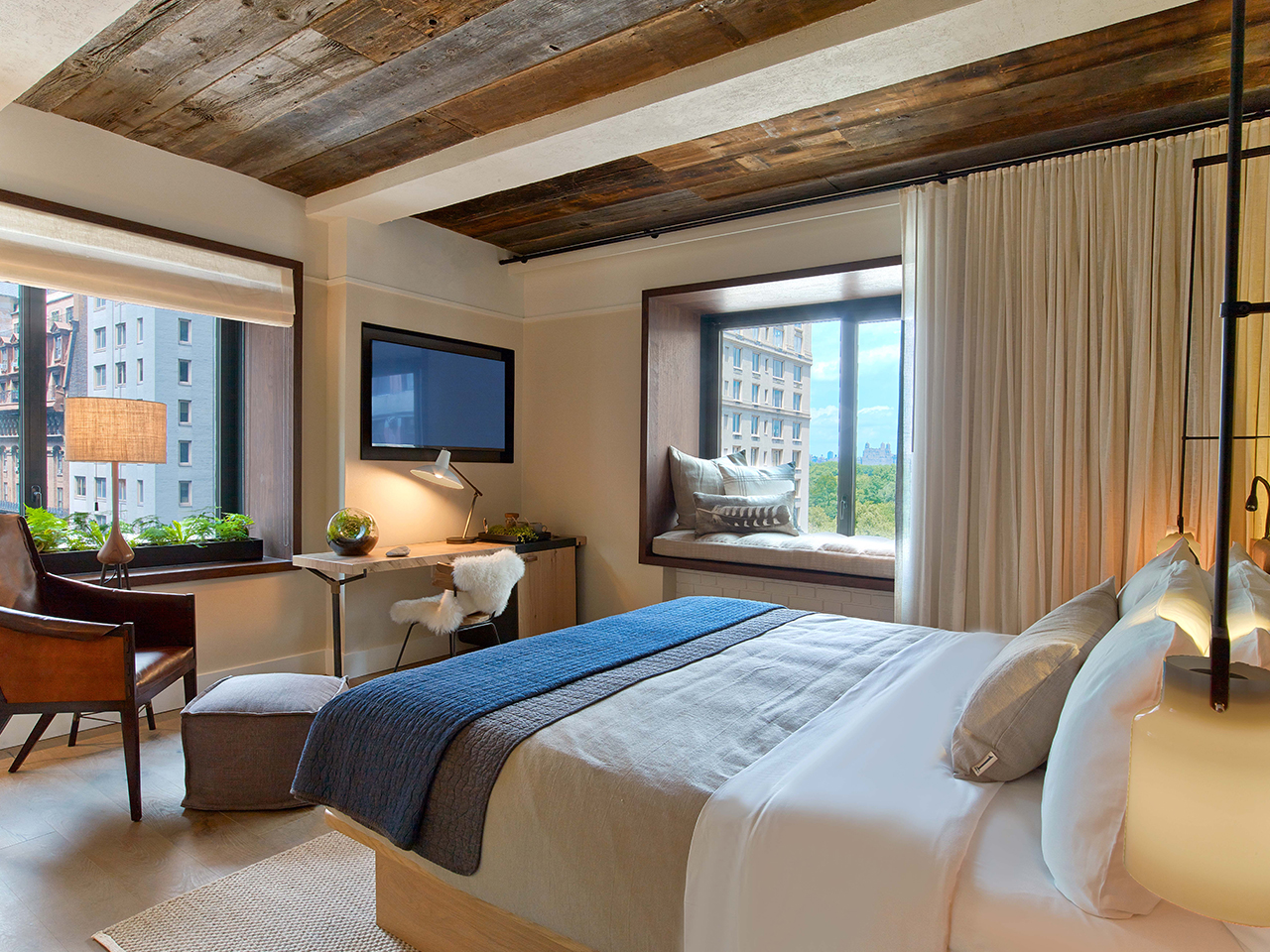 A neon-washed corner of Broadway and 42nd Street is home to The Knickerbocker with the historic hotel’s place right beside Time Square putting it a stone’s throw from theatres, Rockefeller Centre, Bryant Park, and Fifth Avenue shopping.

The Big Apple landmark was built by John Jacob Astor in 1906 – six years before he perished on Titanic – and hosted F Scott Fitzgerald and John D Rockefeller before closing in 1921, but The Knick has been reborn to capture that sassy period style and the 16th-floor bar St Cloud is a rooftop rest to gaze down on Time Square.

Manhattan’s Upper East Side is home to The Surrey, which feels more like a billionaire’s townhouse than hotel, and was built in 1926 as a hideaway for the glitterati with Bette Davis and JFK one-time guests.

The Surrey is NYC’s only Relais & Chateaux property, offering classic salons boasting fireplaces and private terraces as well as spacious suites with separate living rooms. The hotel is celebrated for its art collection, exclusive rooftop garden, and blissful Cornelia Spa described by Vanity Fair as “a place to write home about”.

Soho’s tallest tower accommodates NoMo SoHo and the skyscraper guarantees guests lofty vistas across the sprawling metropolis from their sleeping space. This whimsical hotel mixes vintage touches and modern design to reflect the artistic atmosphere of the eclectic downtown community.

While the Crosby Street plot is an ideal base for travellers keen to become immersed in Soho style – the hotel is surrounded by boutiques and bars – NoMo Kitchen Restaurant provides a great excuse to stay in at mealtime. 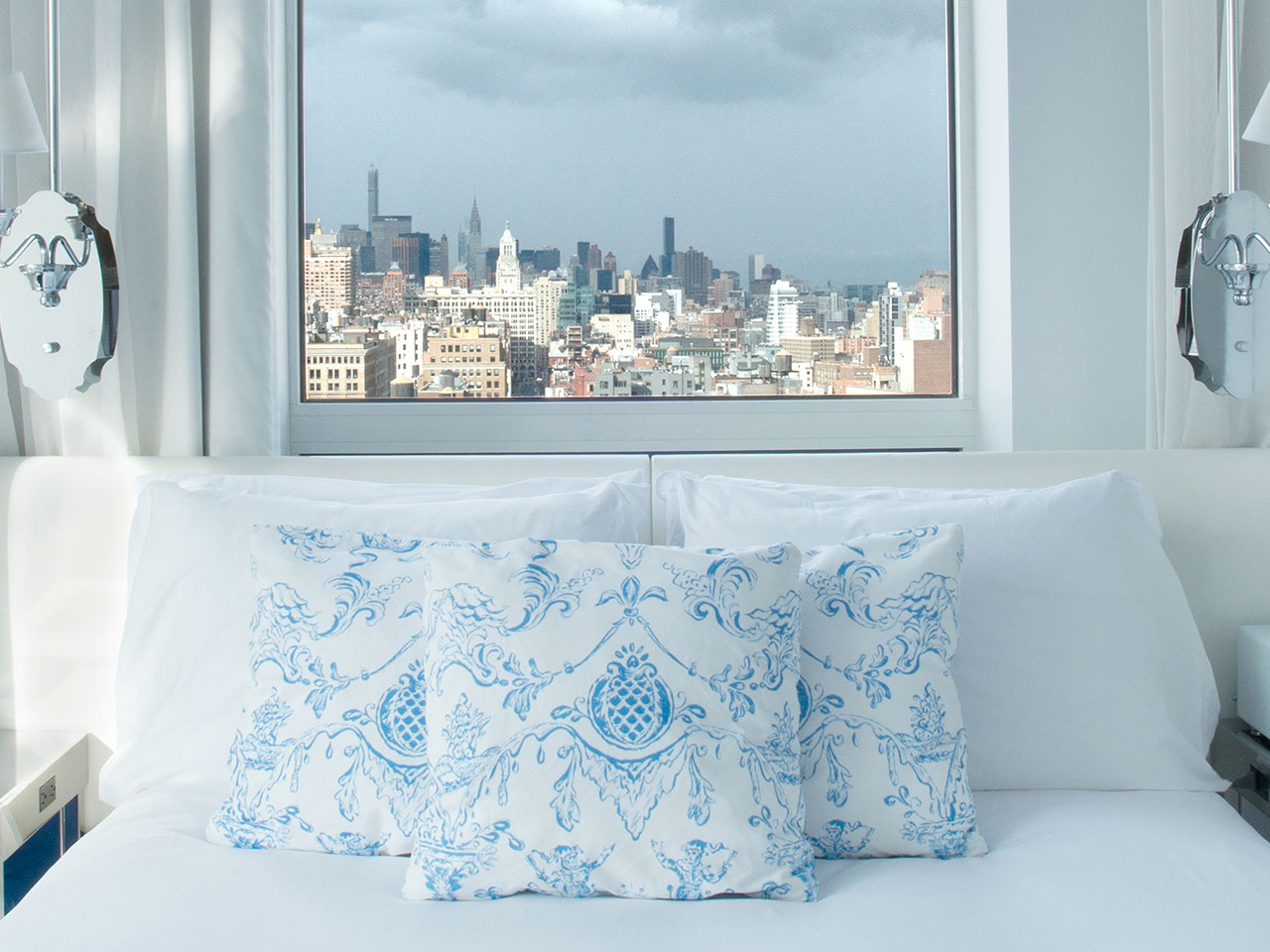 Floor-to-ceiling windows in every one of Z NYC Hotel’s trendy guest rooms frame the Gotham skyline across the East River with beds in queen, king and twin suites positioned to let tuckered travellers gaze at the lights while reclining.

The Hotel is in Long Island City – once a gritty Queens’ neighbourhood morphing into an artistic enclave favoured by young professionals and fashionable families – with complimentary transport carrying guests across the Queensboro Bridge to Manhattan every hour between 7am and 11pm.

Those busting to feel like a real New Yorker during a stay in the city that never sleeps should reserve a modern loft-style suite at the Kimpton Ink48 Hotel.

Right beside the Hudson River in Hell’s Kitchen the hotel is close to the markets, indie boutiques, family eateries, and artisan coffee shops that define this dynamic west-side territory.

The hotel now offers the services of an exclusive hygge concierge – the Danish concept of living well – who can transform a jet-lagged guest’s accommodation into a comfy space that makes “ordinary moments more meaningful”. 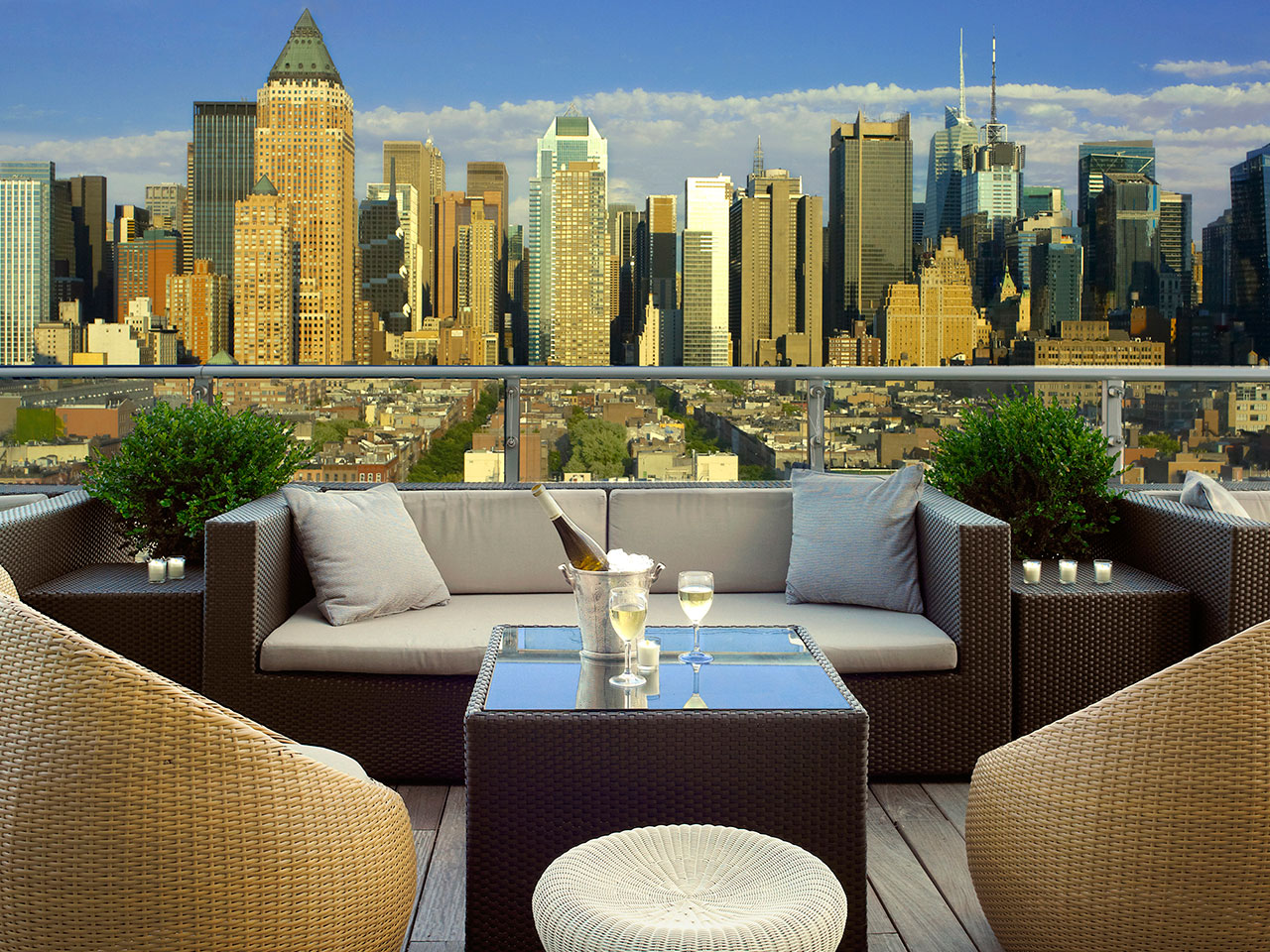 This circa-1920’s dwelling in the middle of Midtown, once home to celebrated novelists John Steinbeck and Thomas Mann, has evolved into The Renwick Hotel with the relaxed address two blocks from Grand Central Station.

Each of the hotel’s gallery rooms and residential-style suites feel like an artist’s studio with easels and paint, origami kits, paper and ink, artwork and literature in every room.

Every chamber also features unique pieces crafted by local artists so you will find the New York skyline painted on the blinds, a paint brush serving as the do-not-disturb sign, and ceramic cups featuring pages from The Great Gatsby.

This handsome Midtown abode only two blocks from Central Park is famous for the Quin Arts program, which honours the building’s artistic heritage by hosting exhibitions and performances in the public spaces and displaying canvases from the enviable permanent collection.

While The Quin is one of Manhattan’s grand old dames the hotel interiors are fresh and modern – there’s even a video wall in the lobby – and The Wayfarer is a classic grill-style restaurant serving seasonal menus. 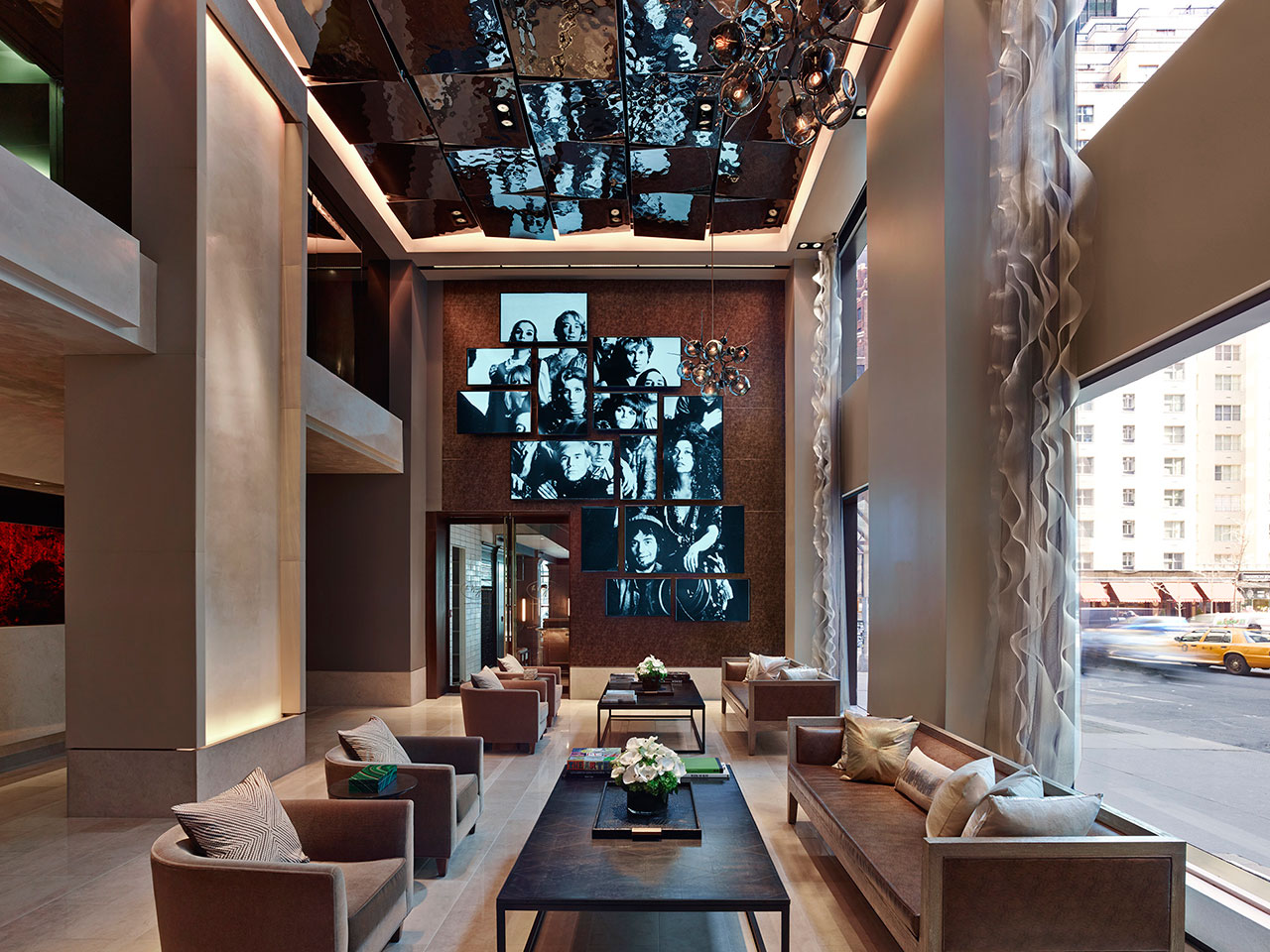 Travellers thinking outside the box will love Yotel New York with the innovative property, on 10th Avenue in Midtown Manhattan, initially inspired by Japanese capsule hotels but designed by aircraft engineers to maximise space.

Stay in futuristic “cabins” rather than traditional hotel suites – there’s a selection of compact but functional rooms that cater to every budget and accommodate everyone from solos to parents travelling with little tackers – and the sprawling 4th-floor lobby has four bars and one of NYC’s biggest outdoor terraces.

Arriving at the Walker Hotel feels like stepping back in time with temporary residents descending a marble staircase to the parlour-style lobby that’s packed with the art-deco details and lush interiors that are the signature of this graceful Greenwich Village address.

New York is infused into the property – bathrooms have products made by the city’s oldest apothecary CO Bigelow and walls covered by classic subway tiles – and The Poet’s Room in the lobby has work from authors that once lived along the tree-lined streets. 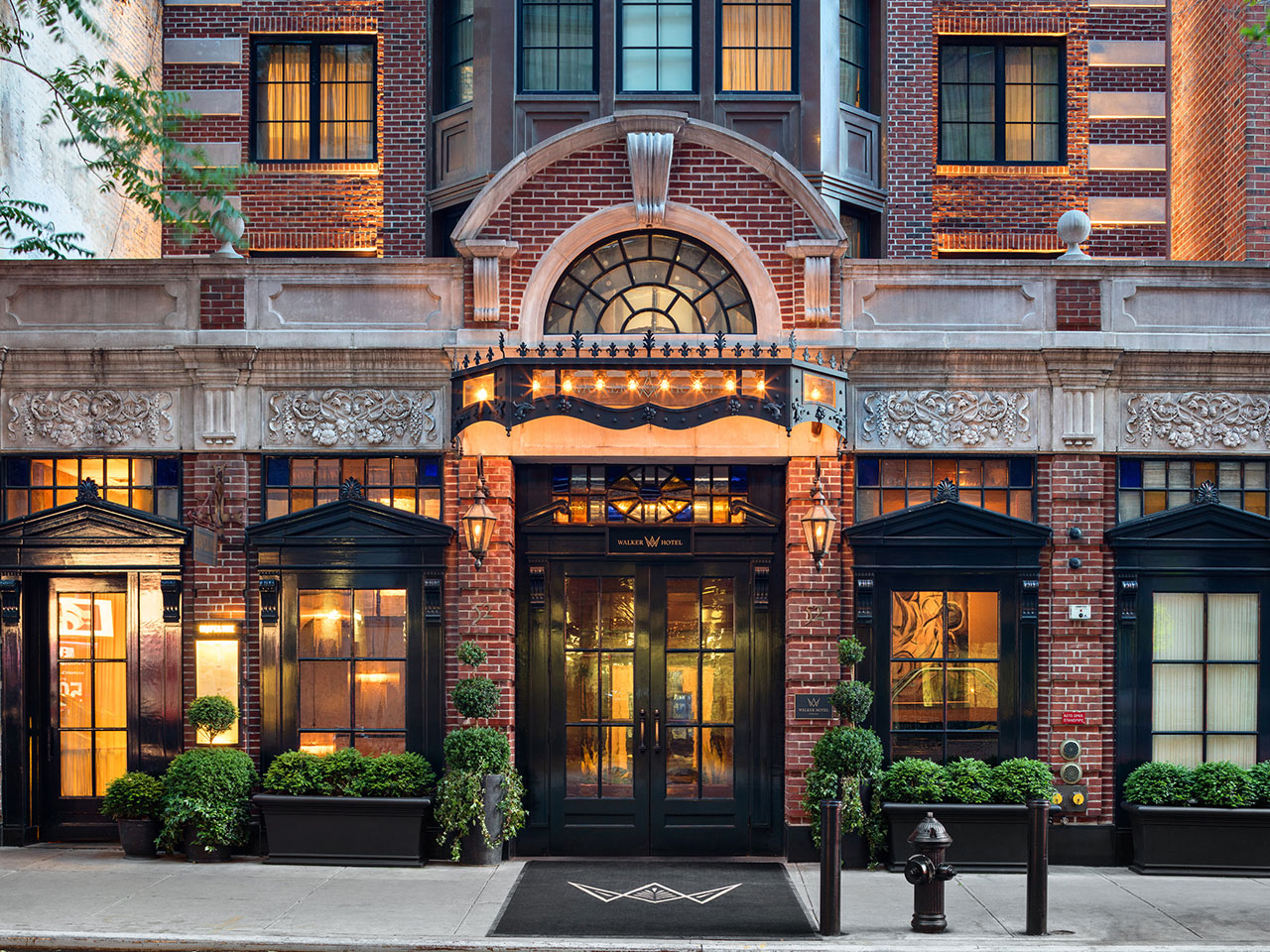 As the world's largest online travel company, we'll try to point out things that we think you'll find interesting and relevant. We like sharing the experiences of our people and customers to help you discover more and make the best choice.
Twitter Facebook Google Instagram