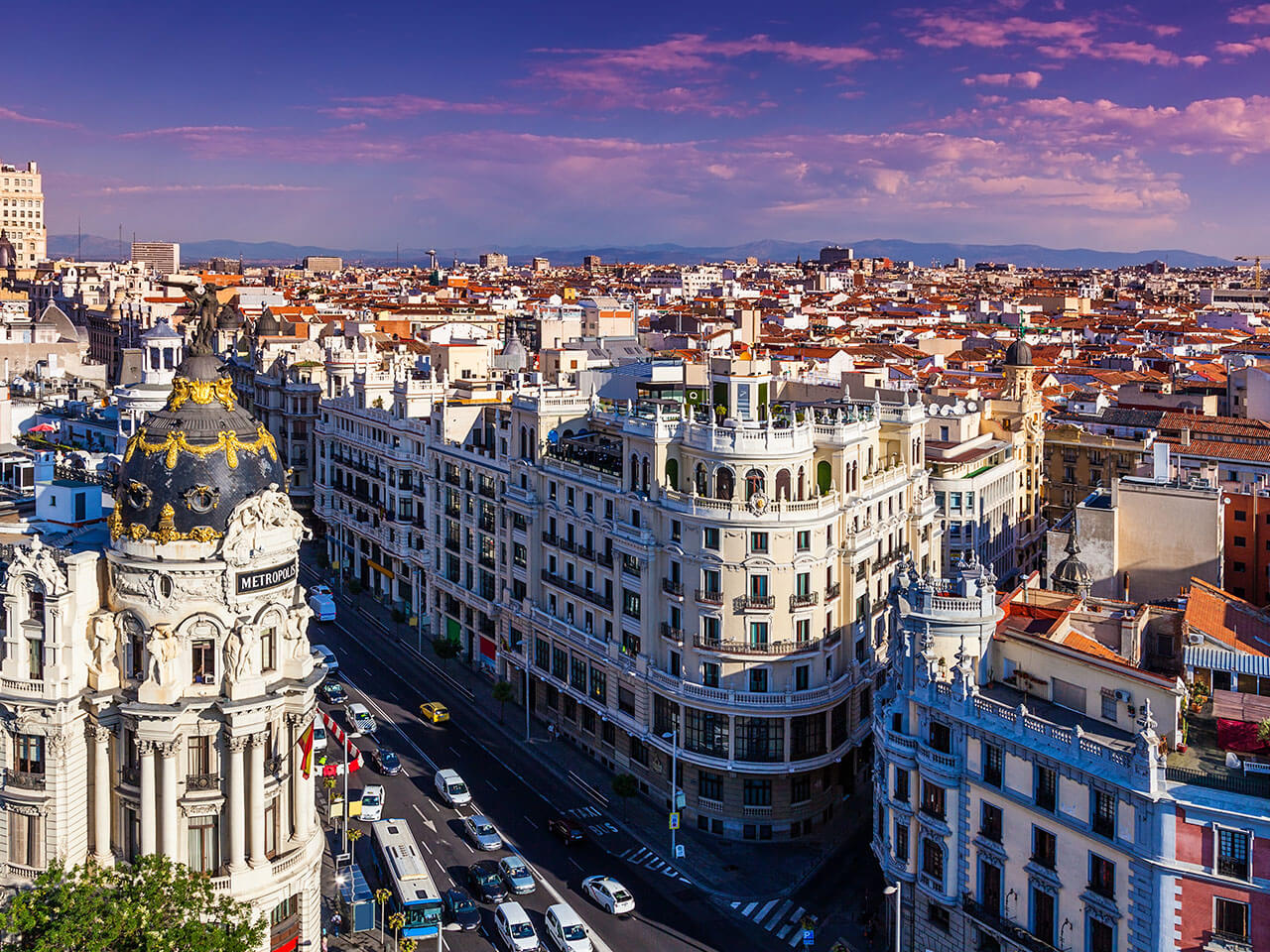 The Spanish capital of Madrid is made up of more than 128 different neighbourhoods, or barrios, each with its own distinct personality. To help you uncover the city’s best sides – from historic buildings to contemporary galleries, and lush green spaces to luxury shopping strips – we’ve rounded up our top five areas.

Ok, this district actually consists of several barrios, but it’s very compact and every major sight is within easy walking distance. It’s one of the most popular spots for Expedia’s Aussie travellers to stay, for usually 2-3 nights, when exploring the city. And there are plenty of major sights to choose from, for example two of the greatest museums in the world: the Prado with its breathtaking collection of European art ranging from the 12th to the 19th century and the more modern Reina Sofia, home to Picasso’s wartime epic Guernica. Outside of the galleries, there’s plenty more art to marvel at. The district’s wide boulevards are lined with imposing statues and ornate fountains, and then there’s the charmingly old-school Retiro Park, with its formal gardens, boating lake and fragrant rose bushes. As you walk from gallery to green space, stop off at Chocolat Madrid for some takeaway churros – a cheap pleasure among all the cultural riches.

In the city’s chicest neighourhood, the streets are lined with high-end boutiques and smart restaurants. With its designer kudos – expect to find Gucci, Chanel and Prada rubbing shoulders with Spanish designers such as Adolfo Domínguez – and futuristic architecture, Paseo de la Castellana (La Castellana for short, or The Castilian’s Mall in English) can easily steal a few hours of your time, and a few hundred dollars from your bank account. Relax after your retail therapy with a drink at the suitably extravagant Magnum Bar in Villa Magna, where the champagne flows from 5pm till 2am. Grab a spot on their palatial terrace and contemplate your new acquisitions while sipping a blush-pink and delightfully fizzy Billecart Salmon Rosé (a steal at 29 euros a glass).

This barrio’s historic buildings tend to attract all the attention, such as the baroque-style Royal Palace and Almudena Cathedral (with its imposing white façade), but don’t forget to check out the colorful San Miguel Market on Plaza Mayor – it’s the place for cheap and tasty tapas while watching the locals go about their shopping; expect hand gestures, fierce bargaining and plenty of passion. The reconstructed covered market opens at 10am each day, and closes at midnight on Monday, Tuesday, Wednesday and Sunday. Sample local delicacies, including freshly opened spiny sea urchins (just scoop out the tangy orange flesh with a teaspoon) and award-winning tortilla by acclaimed chef Senen González. 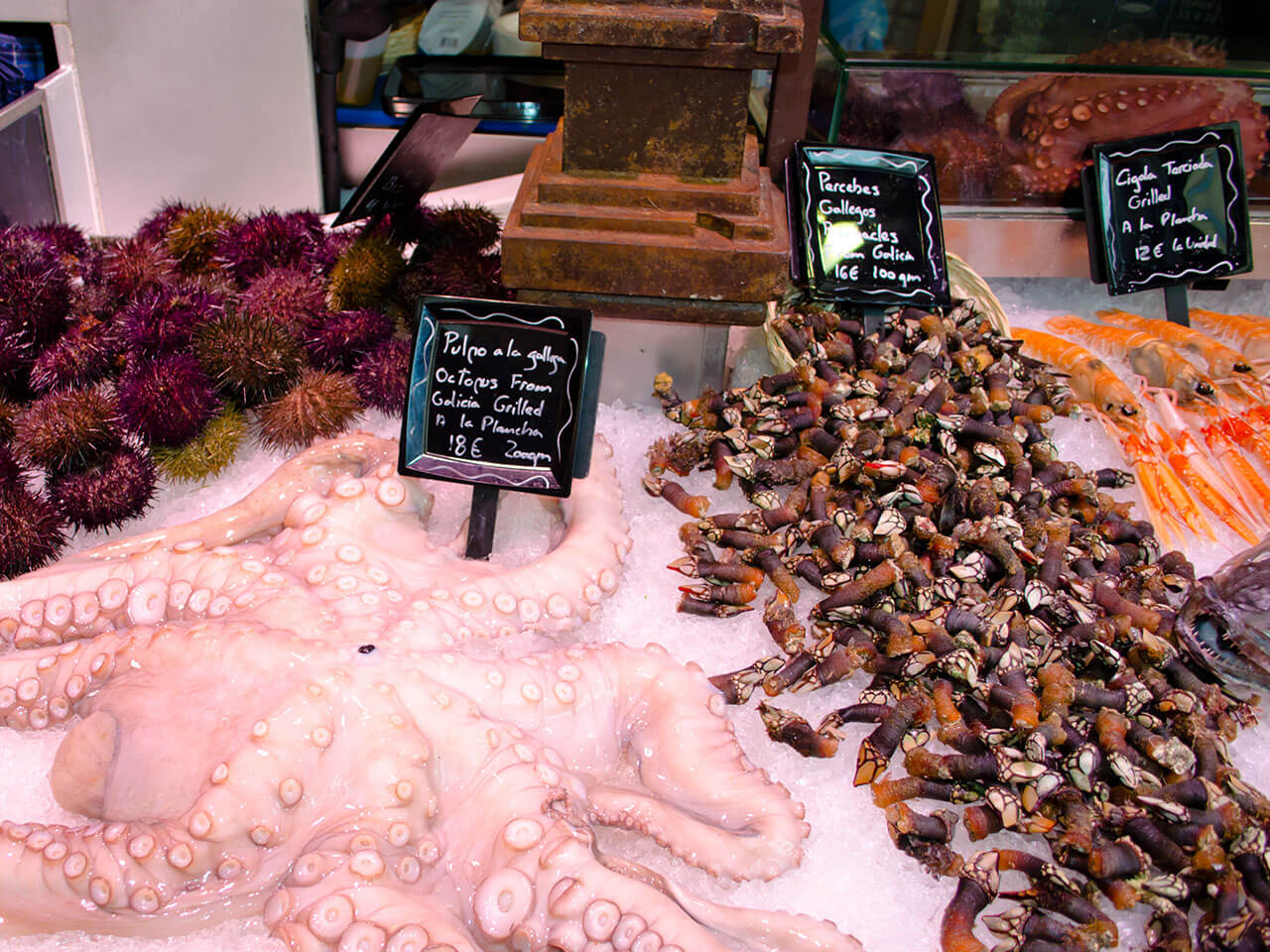 4. Culture, coffee and cupcakes in Malasaña

Channelling a cool, creative vibe, Malasaña is gaining in popularity by the day – due in part to the recent influx of celebrities buying up property here (Penélope Cruz owns an apartment). Explore the barrio’s boutiques and rub shoulders with local designers, musicians and artists in the buzzing cafes – Lolina always pulls a crowd thanks to its great coffee, freshly squeezed juices and retro furniture, which is also for sale. And then there’s cupcake bakery Happy Day, also on Calle del Espíritu Santo. When you’ve got your fill of sugar and caffeine for the day, explore Malasaña’s secondhand shops and pop-up stores – many places have allowed street artists to decorate their façade, so expect vibrant walls and shutters at every turn.

Also known as Barrio de las Letras (the literary neighborhood), many famous writers – including Miguel de Cervantes, author of the iconic book Don Quixote – have chosen to call this small but lively area home over the years. It’s still possible to visit the house where the famous Spanish novelist, playwright and poet died in 1616 and, thanks to the late-night tapas joints that line Calle de las Huertas and Plaza Santa Ana, the place continues to attract bar-hopping bibliophiles from around the world. Pull up a stool at Cervecería Alemana, order a beer and a plate of patatas bravas, and discuss plot development and character arcs with the Madrileños. This wood-panelled bar is famous for being Ernest Hemingway’s watering hole of choice when he was in town.