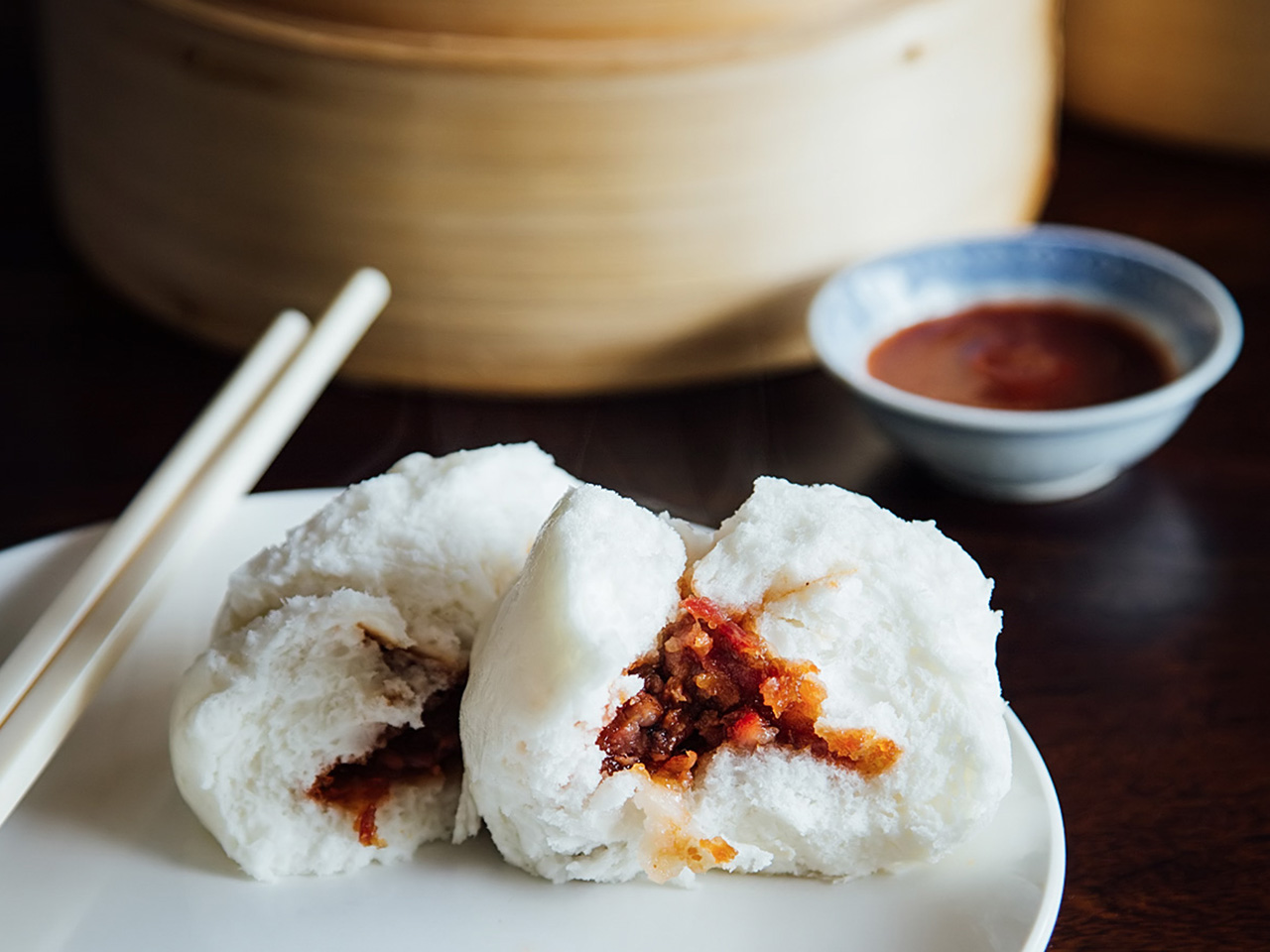 Everybody loves Yum Cha. If you don’t, I probably would have unfriended you by now. Yum Cha means “drink tea” in Cantonese – it is originally a southern Chinesestyle morning or afternoon tea where high-quality tea will be drunk and admired, usually with a few small bites between each sip. However, this tea appreciation culture has evolved into the more popular “brunching” trend popular all around the world during which an array of small dishes are the main focus.

Yum Cha on the weekend in Sydney is an extreme sport. The ritual begins by picking up a raffle ticket and an excruciating long wait outside the restaurant. Once your number is called, you must navigate your way through the sea of hungry dumpling devotees, dodging the trolley dollies to get to your assigned table. The mission is rewarded with basket upon basket of delicious steamy morsels.

Chinese tea is poured, soy and chilli dipping sauce are on standby, and just when you thought you’d be able to relax to enjoy some tasty dim sums, another customer comes out of nowhere and steals all the popular dishes from the trolley just as you’re about to take them. The feisty and chaotic nature of yum cha is definitely not for everyone, but as soon as I munch on that fluffy Char Siu Bao, everything is forgotten.

Yum Cha can be found in almost every suburb of Sydney but most Chinese restaurants around Chinatown are open for yum cha daily. Whether it’s a well-loved institution with familiar hospitality or a newcomer that’s earned its reputation through an innovative dim sum menu, everyone has their favourite yum cha spots. Here’s my listopedia of the best Sydney yum cha haunts:

Marigold Restaurant inside the Citymark Building has been in the yum cha game for decades. Despite the face that the quality of the food has dropped a little and the obscure location (hidden on level 5), this old girl definitely won’t be slowing down anytime soon. It has a dedicated fan base who will religiously sit down to sip tea and chow down a few dumplings. The trolley ladies can be abrupt at times but don’t let that deter you. Make sure you try a few classics including Char Siu Bao (BBQ pork steamed buns), Siu Mai (steamed pork dumplings) and Pai Gwat (steamed pork ribs). 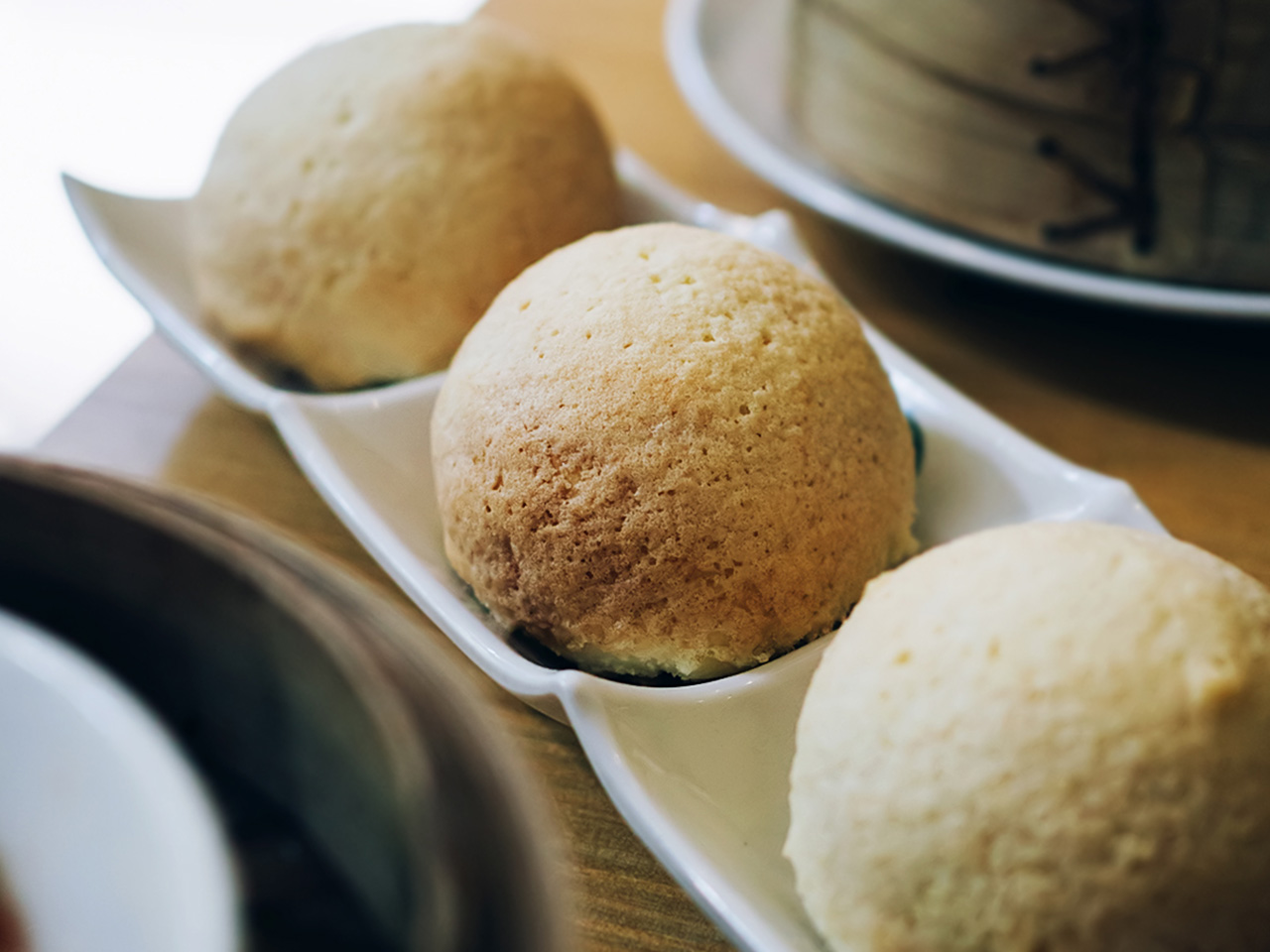 A better yum cha experience can be found at The Eight on the top level inside Market City. It’s the biggest restaurant in Chinatown, fully draped in rich prosperous-red decor from ceiling to floor. The staff here are friendly and eager to offer you dim sums from their trolleys. The major drawcard is their great selection of dim sums, with a whopping 120 dishes on offer. You might need a few visits to get through them all. My favourite is the Ham Sui Gok (deep fried pork mince dumplings), puffed like a football and filled with a pocket of savoury pork mince. A must try is their signature Scallop Siu Mai (scallop and prawn dumpling), a juicy prawn dumpling topped with plump scallop and a generous mound of fish roe that pops like firecrackers with every bite. I also tried a couple of the unconventional dim sums including seafood dumpling in XO sauce and steamed green tea fondant, be prepared, they’re a little hit and miss. 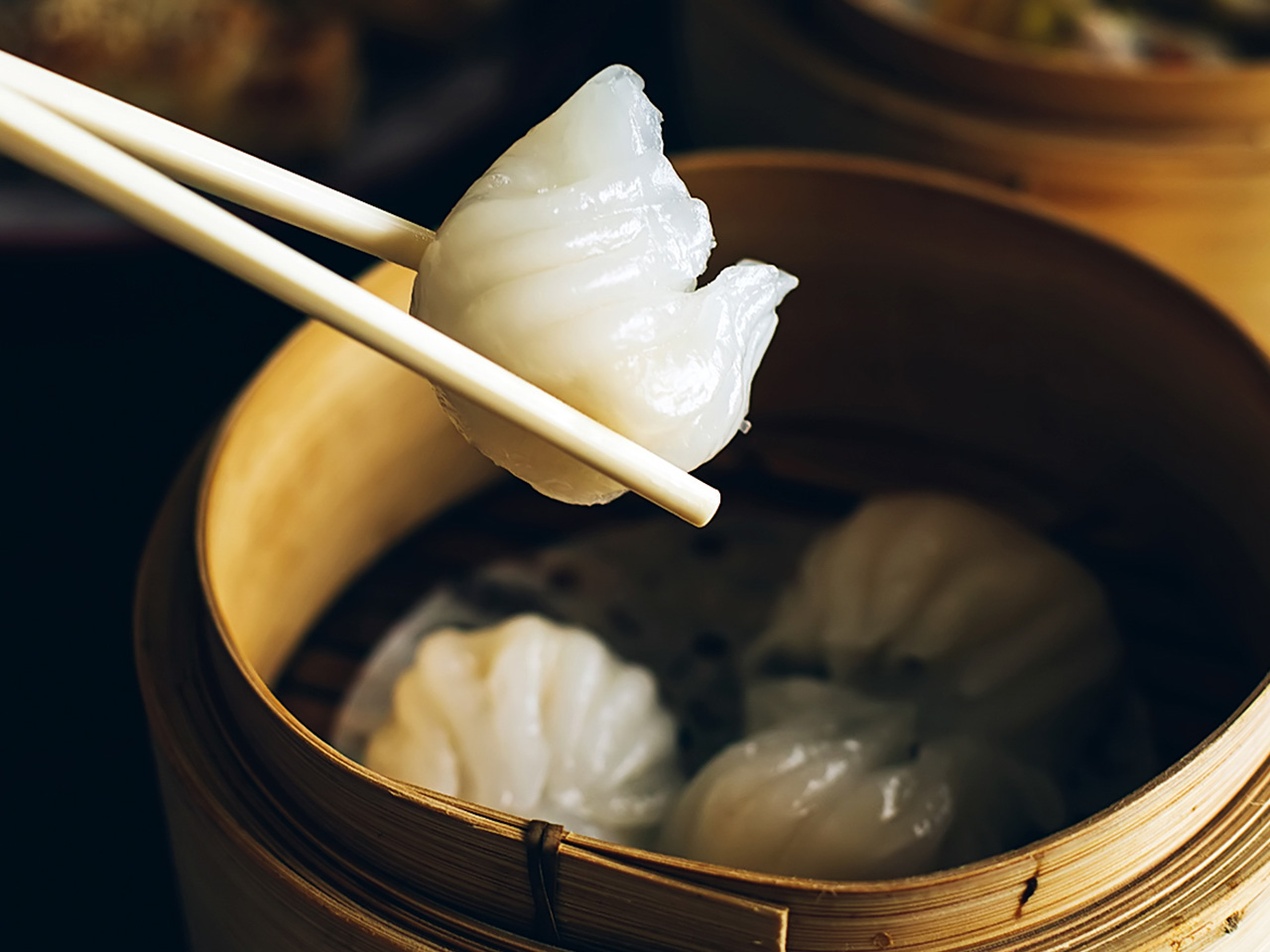 A favourite yum cha haunt of mine is Palace Chinese Restaurant in the heart of Sydney CBD. This place is not always on the foodie’s radar, so scoring a table is definitely less painful compared to the more popular and overhyped spots. But what makes me like this place is their dim sums are consistently good. Here you get to taste a few classics that done well, the Har Gao (steamed prawn dumplings) are exceptional, you know they’re good when you can actually see chunks of prawn wrapped within the thin translucent skin. But I particularly love their Char Siu Sou (baked BBQ pork pastry), the sweet BBQ pork encased in moreish buttery pastry simply melts in the mouth. For the daring eaters, you should also try the Fung Jao (braised chicken feet) at least once. I promise, they’re succulent and tasty. The chicken feet are deep fried then braised in black bean and chilli sauce until you can suck the whole thing off the bone in one hit. The beef tripe is another favourite of mine; the honeycomb tripes are slow cooked to a melting tenderness, soaking up the beautiful soy sauce like a sponge. The buttery flaky Dan Tart (egg custard tart) here is a must try, a perfect sweet finale before falling into a food coma. 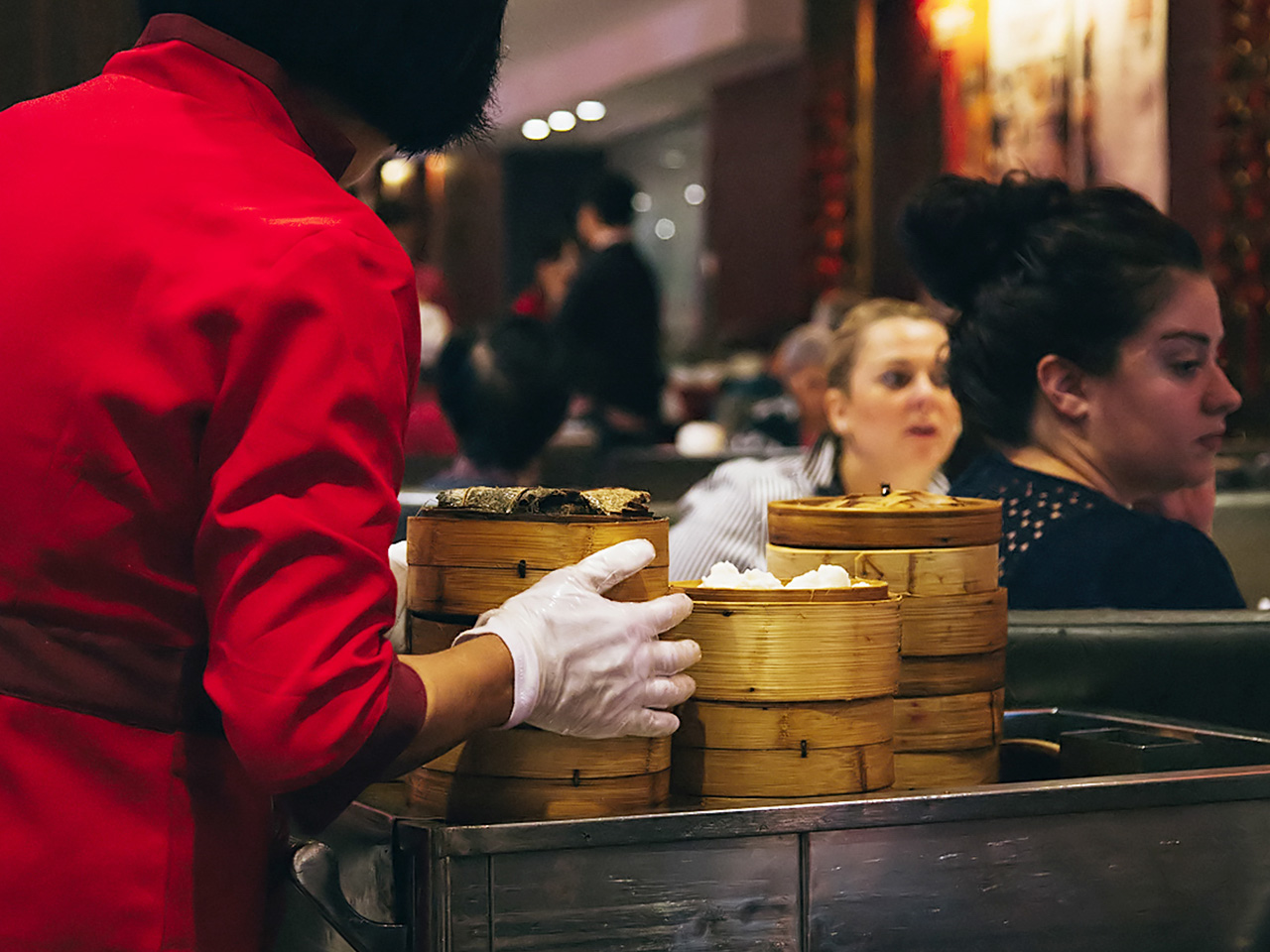 Whilst most yum cha restaurants are busy churning thousands of dim sums to feed the masses, some upmarket restaurants prefer to take a different approach by emphasising the quality of the dim sums. Spice Temple, the Sichuan restaurant under Neil Perry’s Rockpool group, has now entered the yum cha hunger games. Their yum cha selection is quite limited, with Taiwanese Gua Bao and Sichuan dishes thrown in for good measure. A stone throw away is Mr Wong, tucked away in Bridge Lane which offers a similar yum cha concept. Booking is recommended but we arrived bright and early to join the queue outside the restaurant before they even opened the door, and were lucky enough to score the last table. There are no trolley dollies, instead gentlemen in crisp white aprons and sharp vest waistcoats hand out dim sum menus. Swap the bright halogen downlights of many yum cha joints for some dim mood lighting that almost feels like you’re in a lounge bar.

Expect to pay a little more, but you’ll be rewarded with some of the most exquisite and utter fancy dim sums Sydney has to offer. There are no shortcuts here. The servings are generous and use the best ingredients the chefs can lay their hands on. The tender steamed pork and prawn Siu Mai are two perfect, bite-sized pieces; the king prawn and bamboo shoot dumpling is so plump it threatens to burst out of the wafer thin dumpling skin. If you like prawn toast, then the Mr Wong version with foie gras and almonds is the creme de la creme. But expensive ingredients doesn’t always guarantee a good tasting, as we find the poached pork, prawn and black truffle dumpling is lacking the core flavour of truffle but overpowered by coriander. 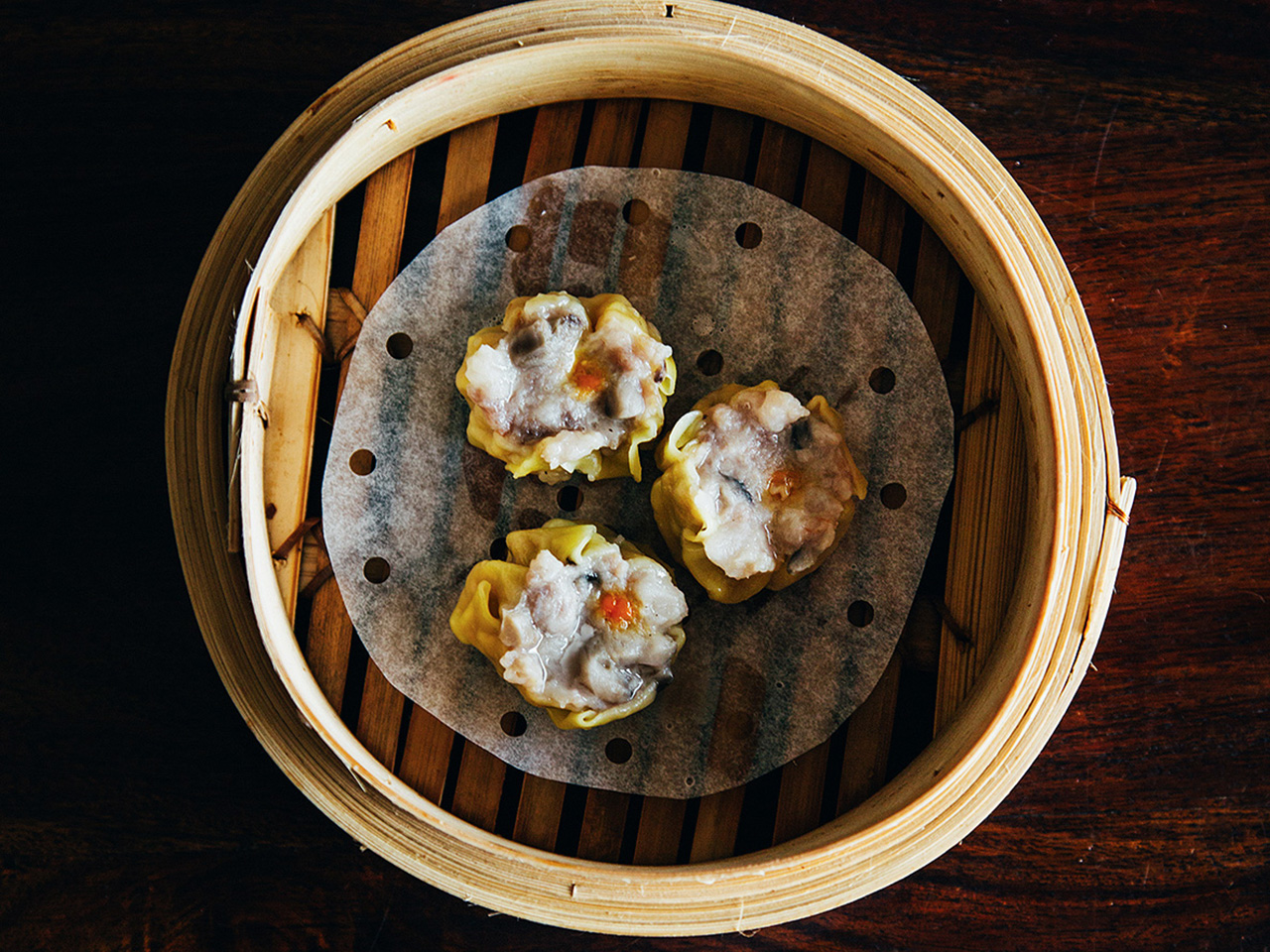 Last but not least, the most raved about Michelin-starred dim sum restaurant from Hong Kong, Tim Ho Wan, has also recently landed on our shores. Despite this establishment being only a few weeks old, a flock of dumpling devotees already congregates outside the restaurant. They’re willing to queue for hours, hoping to get the first taste of those award winning dumplings and buns. The dumplings here are well made, non greasy and clean tasting. While I’m happy gorging down a couple of the deep fried wasabi salad prawn dumplings, it’s their signature baked bun with BBQ pork that steals the show. The perky baked buns are coated with a crunchy sugary top which contrasts nicely with the savoury BBQ pork filling inside. Trust me, you will never settle for just one bun, so take my advice and order two portions, because you’re definitely not going to share.