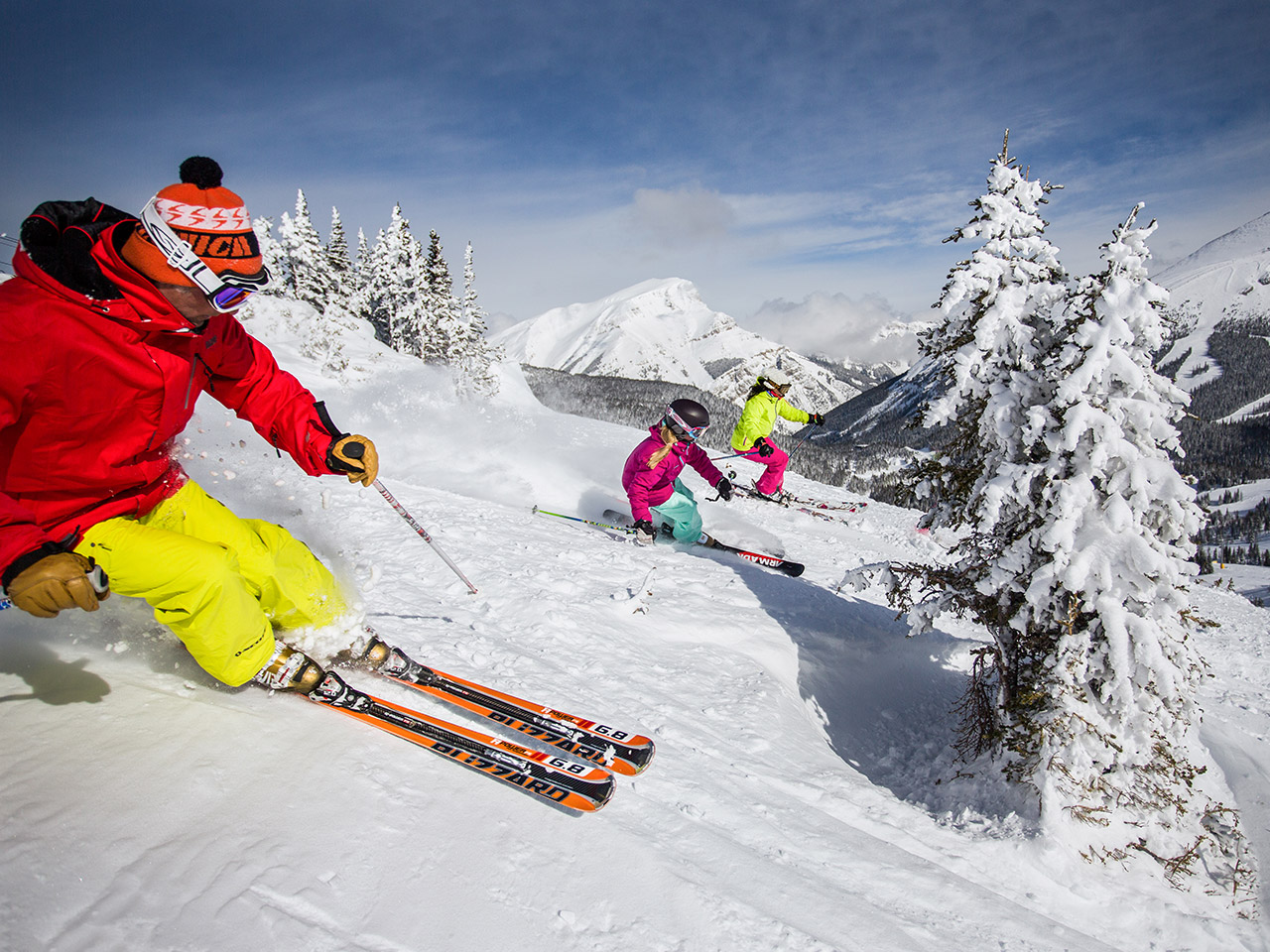 Whether you’re a powder hound, a snow bunny or a fan of the après lifestyle, check out our Listopedia of North America’s top ski resorts.

Year round skiing. Yes, that’s right, Mount Hood Territory has the longest ski season in North America, closing only between September and November. Timberline Lodge sits at 6,000 feet on the face of Mt Hood, the tallest mountain in Oregon. It’s ski-in ski-out lodge life at its best, with an enormous roaring fireplace and two resident Saint Bernard dogs. It is a National Historic Landmark – you might even recognise the exterior from seminal horror movie the Shining. Perfect in winter but also an excellent base in spring. And even summer. The resort’s Palmer Express goes all the way up to 8,400 feet, almost all the way to the top of the ancient volcano, and is buried in 38 feet of snow during winter. In spring and summer it’s the domain of professional skiers, snow bunnies and snowboarders alike. Save time for some snowshoeing around the rest of Mount Hood Territory – the hike down to Trillium Lake is breathtaking. 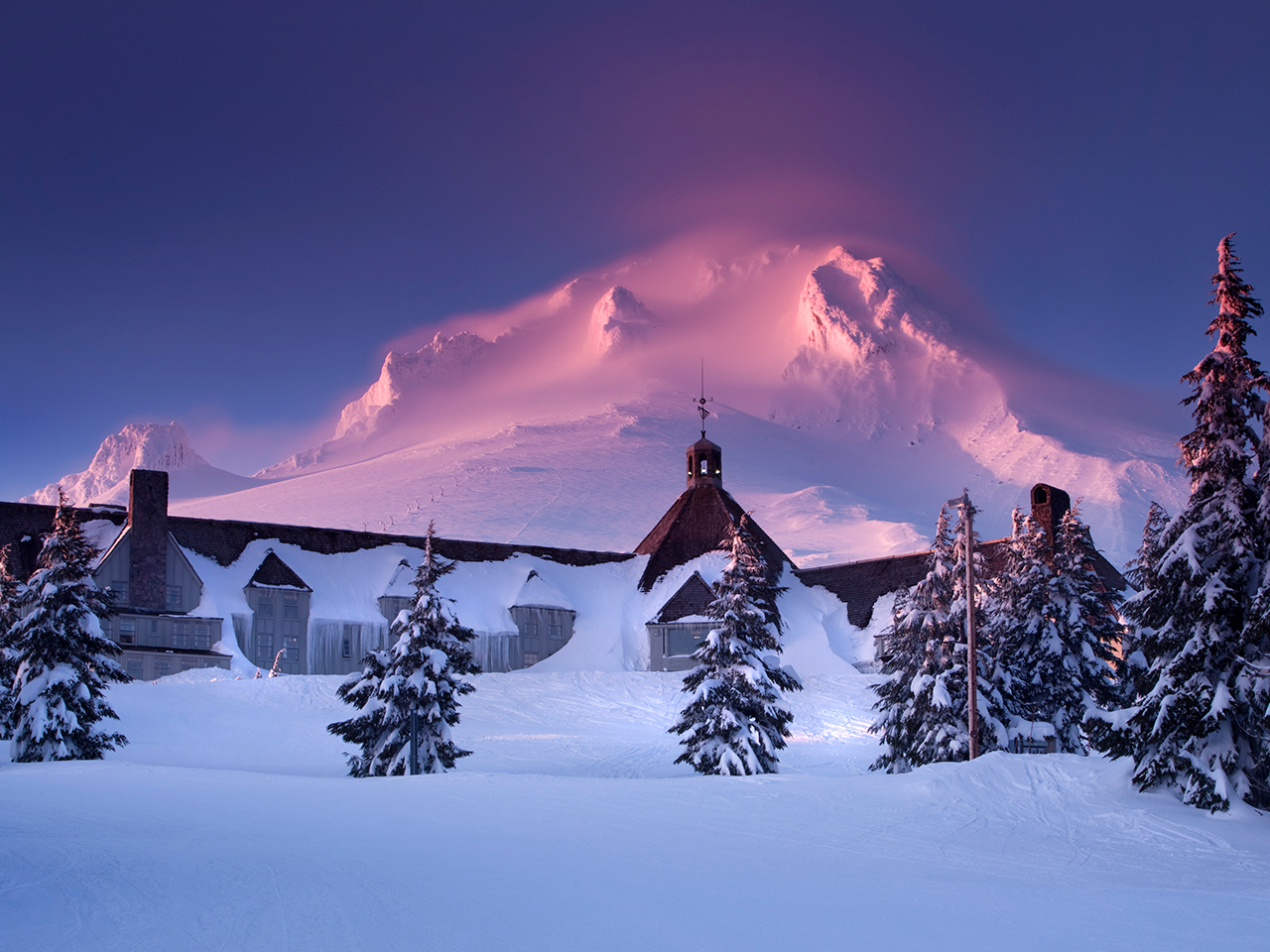 Jackson Hole is a ski resort on steroids, serving up the highest and steepest runs in North America. The most notorious run, Corbet’s Couloir, is a Mecca for skiers wanting to prove their mettle (or watch others do so). The run is named for mountaineer Barry Corbet, who back in 1960 spotted a narrow crease of snow shaped like an upside-down funnel, high up on Jackson Hole. Said he: “Someday someone will ski that.” In 1967 someone did, and it became a permanent fixture on the trail map, and on every skier’s bucket list.

This old-town mid-mountain ski resort five hours drive northeast of Vancouver is governed by very charming city “laws” designed to contribute to its charm – all Silver Star buildings must have at least five colours in their design scheme. Think brightly coloured ski shops, candy stores and ye olde themed bars. It’s ski-in ski-out at its best, with beautiful lodges and a laid back family friendly atmosphere that makes it perfect for all ages. There are plenty of black diamonds for the adventurous but also lots of great beginner and medium terrain.

It might be less well-known by Aussies as a star studded ski resort than its bigger cousin Aspen, but Beaver Creek is designed for those who like to ski in style. Think heated walkways, escalators to the chair lift, and a daily cookie time that sees chefs bring out silver platters piled high with freshly baked cookies to skiers as they finish their last runs for the day. Like we said, this is the spot for those who like to ski in style. The Park Hyatt Beaver Creek sits right in front of the Buckaroo Express gondola and is the spot for après drinks around the open fire pit. Finish a few runs early, order a hot toddy and watch the skiers come down Hay Meadow as the day winds down. 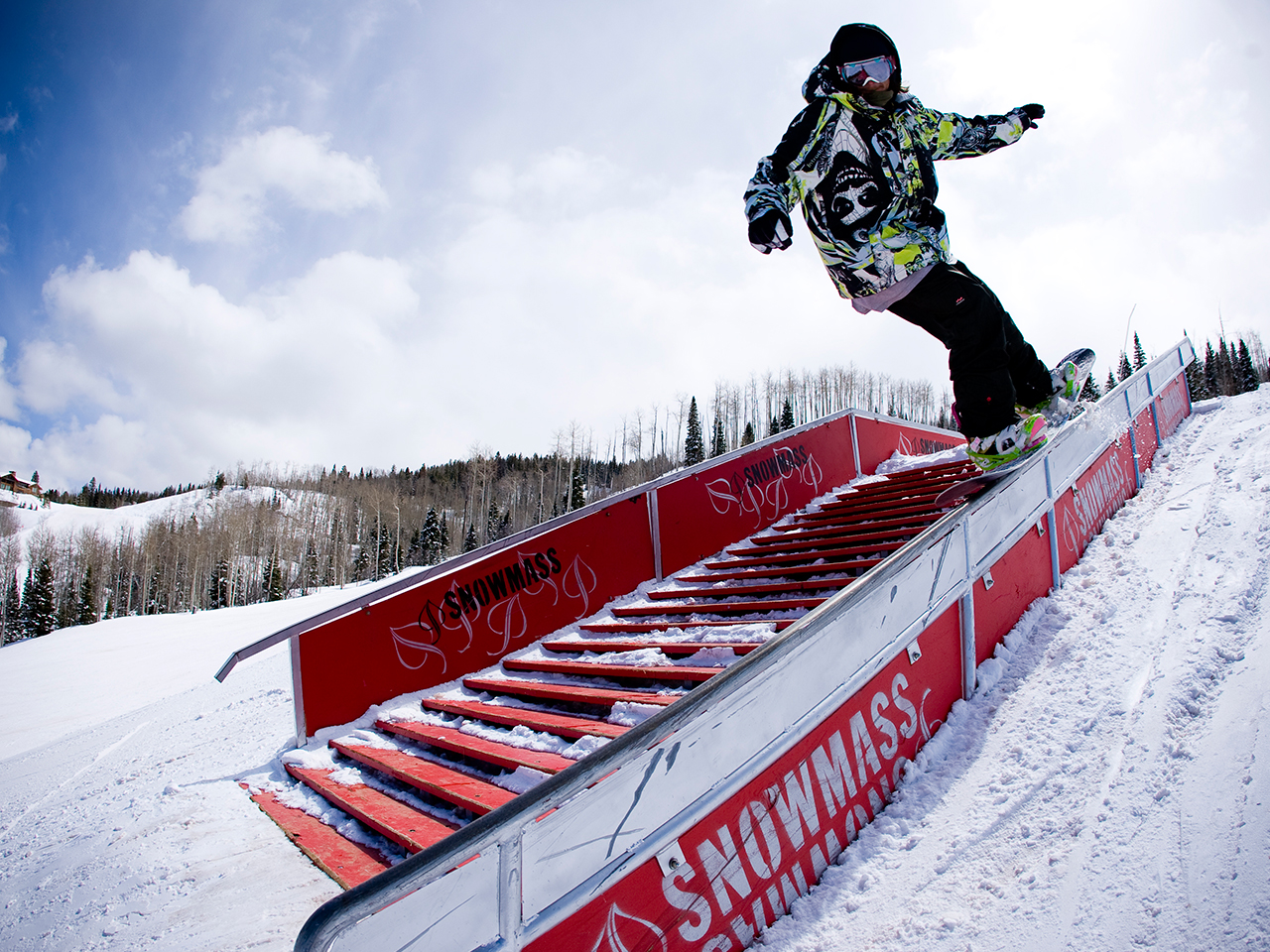 You have probably heard of Lake Louise, one of Alberta’s beautiful alpine lakes, but did you know it also has a ski field? Lake Louise Ski Resort is one of North America’s biggest resorts, with 4,200 skiable acres. The front runs look down on Fairmont’s famous Chateau Lake Louise hotel and are the best spot for a bird’s eye view, but there’s also plenty of beautiful runs through the trees – Ptarmigan Glades is a locals’ favourite.

A ski resort that also has natural hot springs? Need we say more? Hot tubbing is an important part of any serious skier’s end of day routine. And if it isn’t, it should be! Strawberry Park hot springs are just 11 km from town and are open until 10.30pm, with no under 18 year olds until after dark! Back to the actual snow, Steamboat Resort itself is well known for that all elusive Champagne Powder – with lots of tree skiing hotspots. There’s a terrain park and plenty of runs –165 named trails to be exact – to keep you busy. 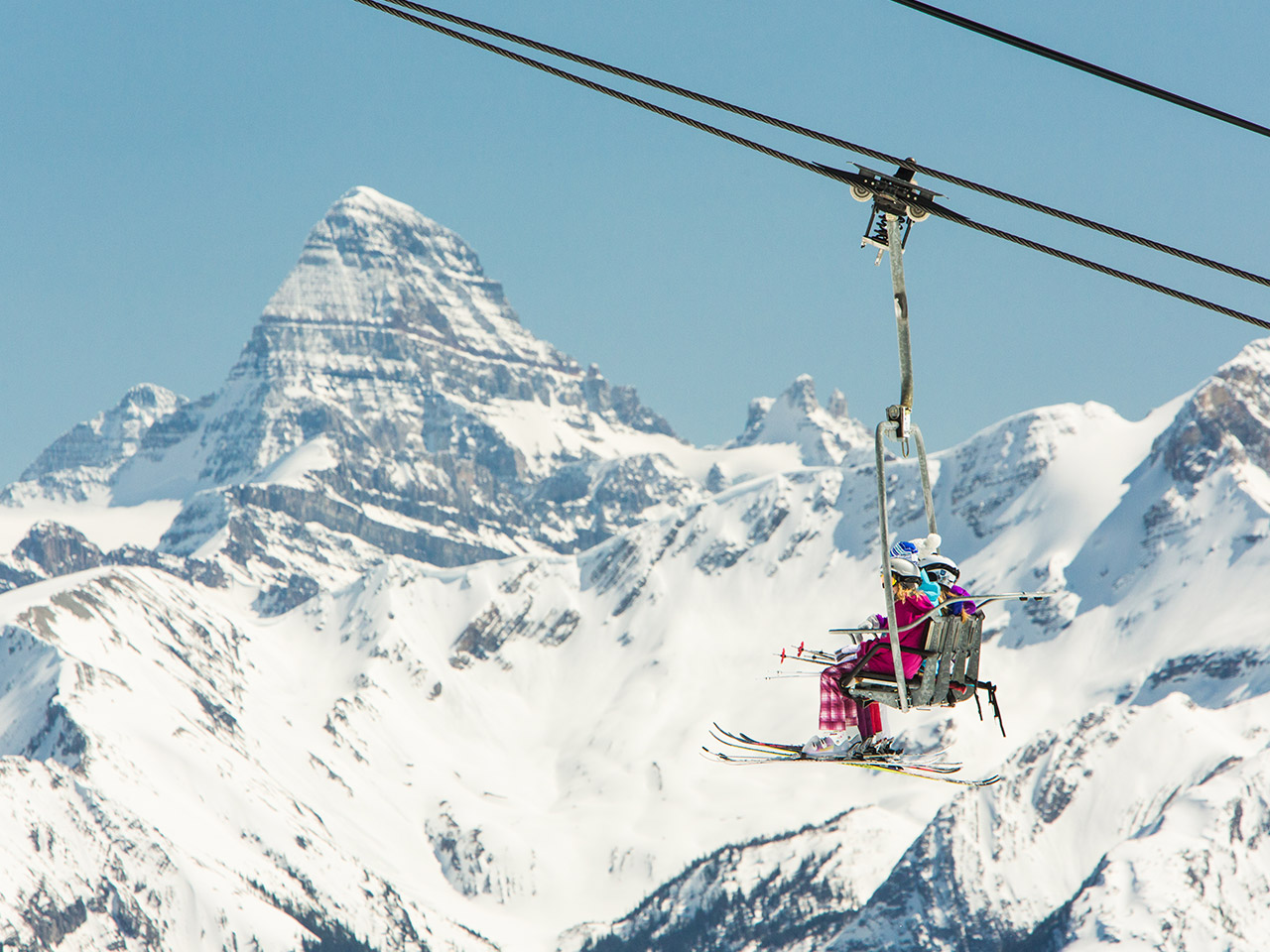 Aussies and Whistler are like a Tim Hortons donut and a cup of hot chocolate – and if you hadn’t had a Timbit, you’re missing out! Whistler Mountain and Blackcomb Mountain are a year round playground, but they really come to life when the snow falls. Then there’s skiing, snowboarding, dog sledding, snow mobiling, snow shoeing, cross country skiing… the list goes on! This season you’ll be able to try baseboarding at the Whistler Olympic Park. North America’s first Bromley Baseboarding program is like tobogganing on steroids.

Swishing down the slopes with celebs: Aspen, Colorado, USA

Aspen is known for being the winter playground of the rich and famous, and with four main Aspen ski areas, it’s highly likely that you’ll share a gondola or a fireplace with a movie star or two. The namesake town at the base of these mountains is filled with houses that are straight out of Hansel and Gretel, with colourful facades and white picket fences. ­­Settle in for a week and try out all four mountains – Aspen Mountain and Aspen Highlands are the closest mountains, just minutes from Aspen town, but make time to catch the bus over to Snowmass, for long groomed runs and dramatic views, and Buttermilk, which is great for beginners but also for watching the world’s best compete at the adrenalin-fuelled X Games, held annually on Buttermilk’s mountainside. The big news this season is that the Audi FIS Alpine World Cup 2017 finals will take place on Aspen Mountain, the first time they’ve been held outside Europe in 20 years. 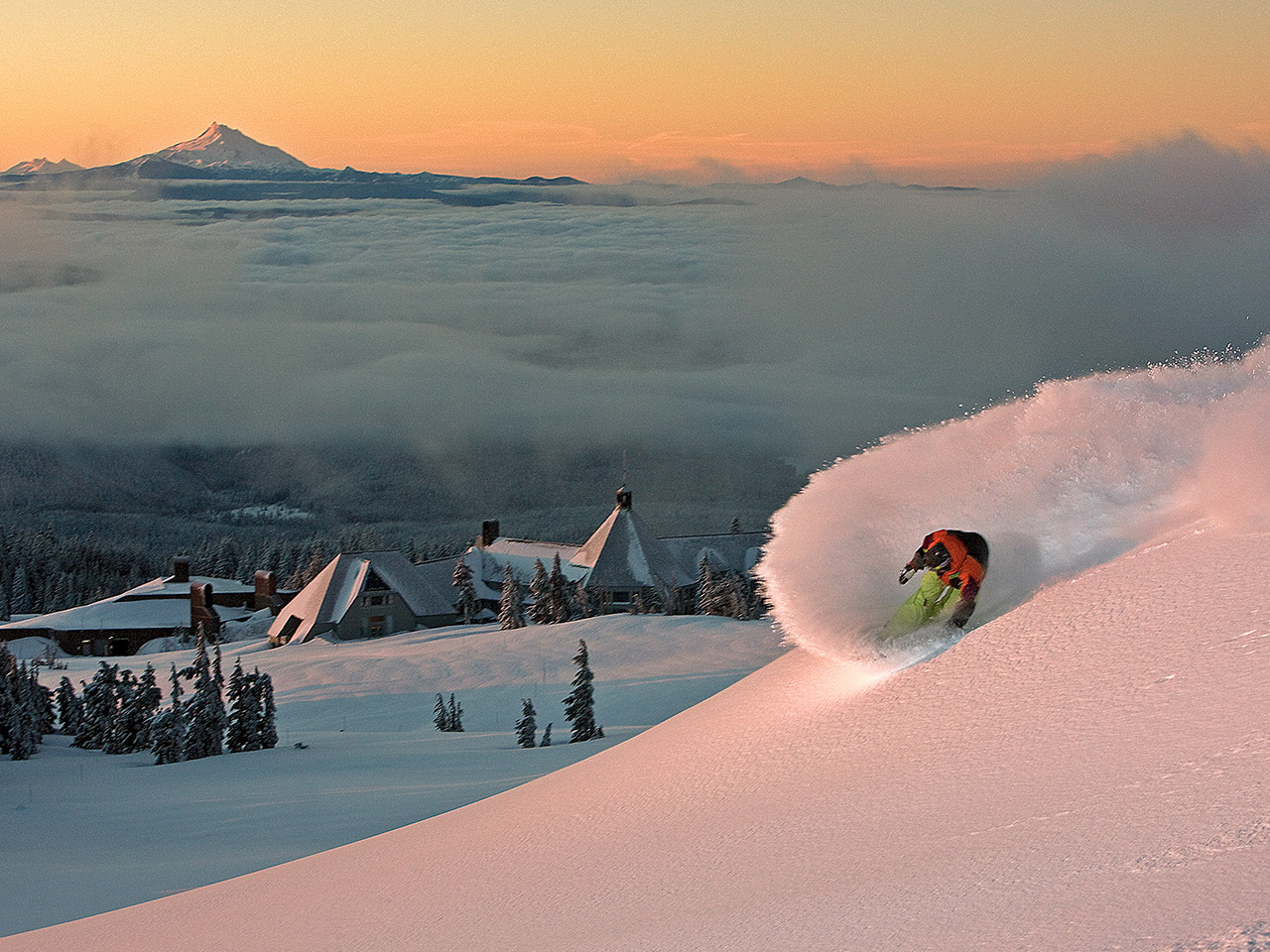 If you haven’t been to Banff, you’re missing out. Located inside the Banff National Park, this town is ringed by the Rocky Mountains and has a fun, laid back ski town vibe without the crowds of its larger cousins on the west coast. Sunshine Village has an annual snowfall of 35 feet, with a season that runs from November until the end of May.

The big news last season was the official opening of Park City Mountain Resort – the joining of Canyons Resort and Park City Mountain Resort means there’s now more than 7,300 acres of terrain in the biggest ski and snowboard resort in the country. This season is the time for exploring all of that terrain, with plenty of fun non-skiing activities to boot. One of the best times to visit is during the Sundance Film Festival, when the celebrities and directors flock to town.