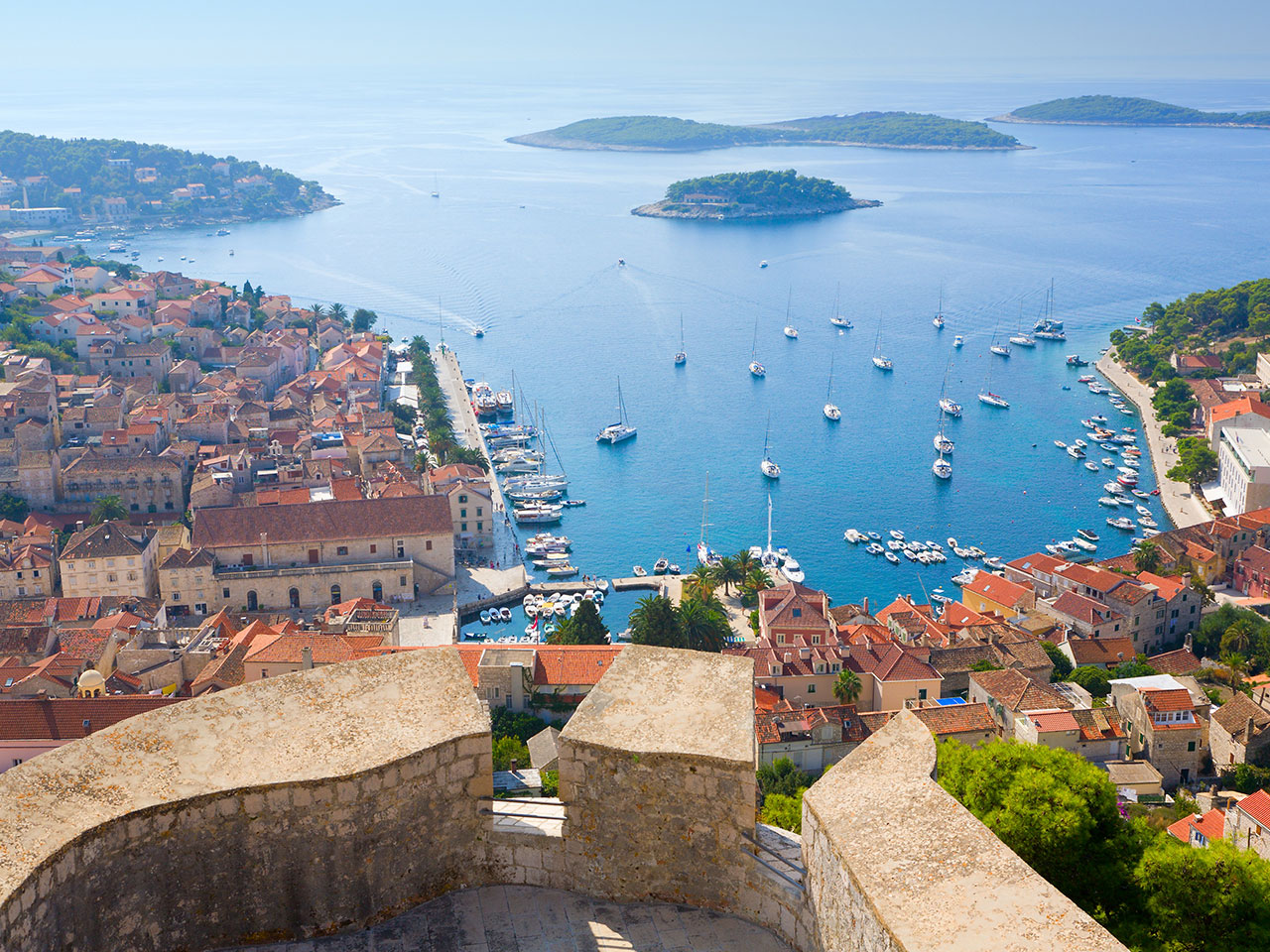 Whether it’s just a few sandy square feet or a sprawling maze of canals and cobblestones, the islands of Europe are some of the world’s most popular tourist destinations and there’s plenty of reasons why. Here’s our Listopedia of places that are worth leaving the mainland for.

One could argue Great Britain itself is an island, but there are plenty of small islands in the United Kingdom worth mentioning. And this small spot off the coast of Portsmouth is gaining a reputation for a cool, quirky scene. That’s largely thanks to the Isle of Wight Festival. The four day music festival draws in big names and big crowds, taking over the small fishing villages. The rest of the year, the secluded beaches, charming villages and cycling trails keep visitors coming back.

Sao Miguel is the biggest of the Azores archipelago in the mid-Atlantic, 1,500km off Portugal’s coast. The nine Volcanic islands are popular with holidaymakers of all ages, with plenty of festivals and historic events held throughout the year. The main town of Ponta Delgada is a good base – its tiled Chapel of Nossa Senhora da Esperanca is a delicate beauty. However it’s the island’s natural assets that are its biggest draw card – tropical greenery, thermal hot springs and volcanic lakes are quiet and peaceful.

This tiny little island in the middle of Lake Bled is straight from a fairytale. The bell tower of the Church of the Assumption peeks out behind the trees clustered on the island, which is accessible by row boat or Plenta, the traditional covered row boat that ferries visitors between Bled and the island throughout the day. You won’t spend long on this tiny island but the alpine lake is the perfect setting for a few hours of kayaking, swimming or rowing. Look down on the scene from the Bled Castle, sitting right on the edge of a cliff 100 metres above the lake. The Castle dates back to the 11th century, with additions over the centuries including a moat, Gothic arch and turrets. 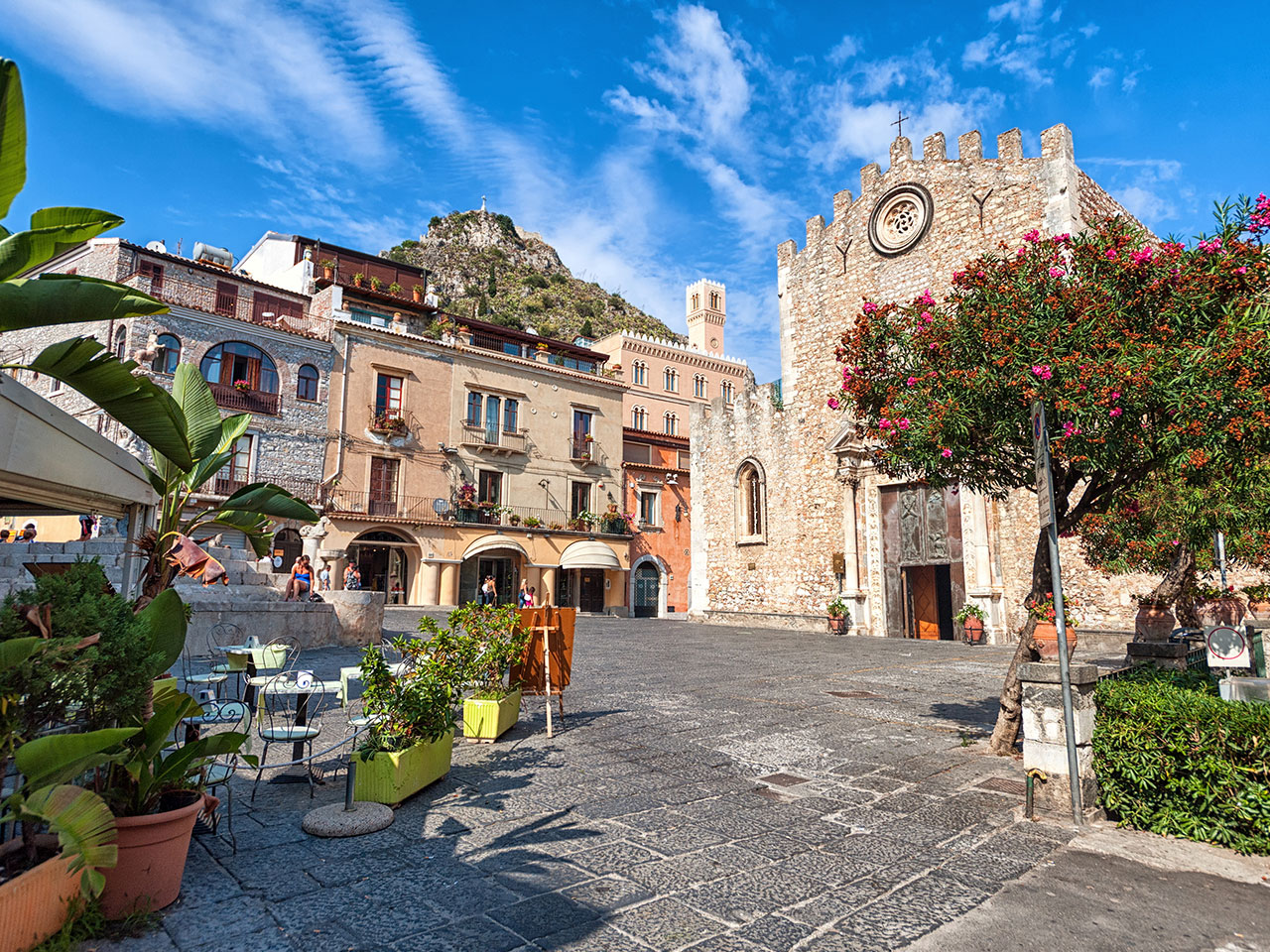 The north of Norway is the home of this pretty archipelago of islands separated from the mainland by Vestfjorden. There are four main islands – Austvågøy, Vestvågøy, Flakstadøy and Moskenesøy – have bridges and tunnels running between them but during the long days of summer, hop on a passenger ferry to enjoy the scenery. The islands are famous for their rugged mountains and picture perfect fishing villages perched on the shore. One of these villages is Svolvaer, a great base for out on the water. Fishing and Killer Whale watching tours are popular pastimes for travellers. Check into Nyvågar Rorbuhotell for a waterfront stay in quaint, colourful cabins.

If you’re going island hopping in Croatia, make sure Hvar is on your itinerary. It’s no secret this island is a playground for the rich and famous, with superyachts anchored just off the harbor almost every day of the week. The crystal clear waters aren’t just reserved for the extremely wealthy. Thousands of tourists arrive via ferry from Split each summer, spending a day in one of the beach clubs. Check into the Amfora Hvar Grand Beach Resort, where the poolside cabanas are hot property, and you won’t have to worry about the crowds. Remember to venture beyond the beach – Hvar’s well preserved 13th century walls and stunning marble plazas are polished to perfection, and the Spanish Fortress is worth a visit.

Another tiny island at the heart of a larger tourist city is Margaret Island. Just 500 metres wide, the island sits between Buda and Pest (the cities were combined back in the 1800s) and today is a large park filled with manicured lawns and flower gardens. There’s also an Olympic swimming pool, ruins of a Franciscan church dating back to the 1200s and a fountain whose water sprays 25 metres into the air, complete with music and light accompaniment. The island was once known as Rabbit Island, due to the large number of furry inhabitants but these days you’ll mainly see locals picnicking on the lawns, taking a break from the bustle of Budapest. 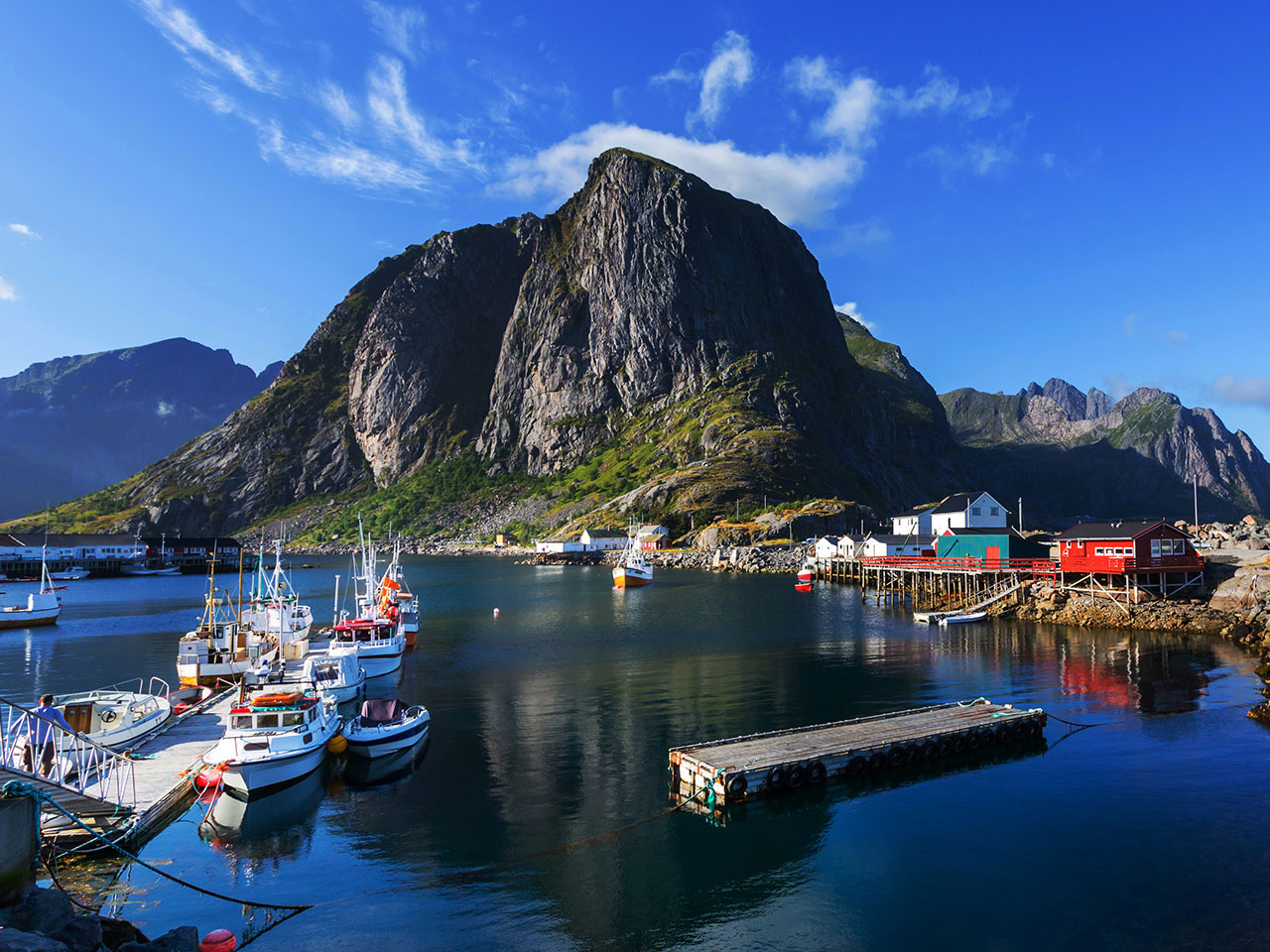 For such a small piece of paradise, this beautiful Mediterranean island packs in everything you need for glamorous getaway. Think four poster beds, deep bath tubs and jaw dropping views at Villa Marina Capri Hotel & Spa, Michelin-starred dining at Restaurant L’Olivo and plenty of designer stores. Skip the big brand names and make a beeline for The Carthusia Perfume Factory. Rumour has it monks first made a perfume on the island in the 1300s. This perfumerie has been creating signature scents since the 1950s. Expect beautiful lemon, rosemary and wild carnation scents, with all ingredients sourced on the island. The signature Capri experience is a trip to the Blue Grotto. Hop into one of the small wooden rowboats that are able to slip into the famous sea cave at low tide.

Taormina’s sheltered pebble beaches are hot property during summer, none more so than the stretch looking out at this tiny islet connected to the beach by a rocky path. Walk out to the island for a peaceful, picturesque afternoon in the sun. The more adventurous get their daily exercise swimming around the island before taking the cable car back up to Taormina’s old town. The historic city dates back to the 4th century and is home to plenty of charming restaurants, bars and boutiques. An influx of celebrities and socialites descend on the town each year during the Taormina Film Festival. 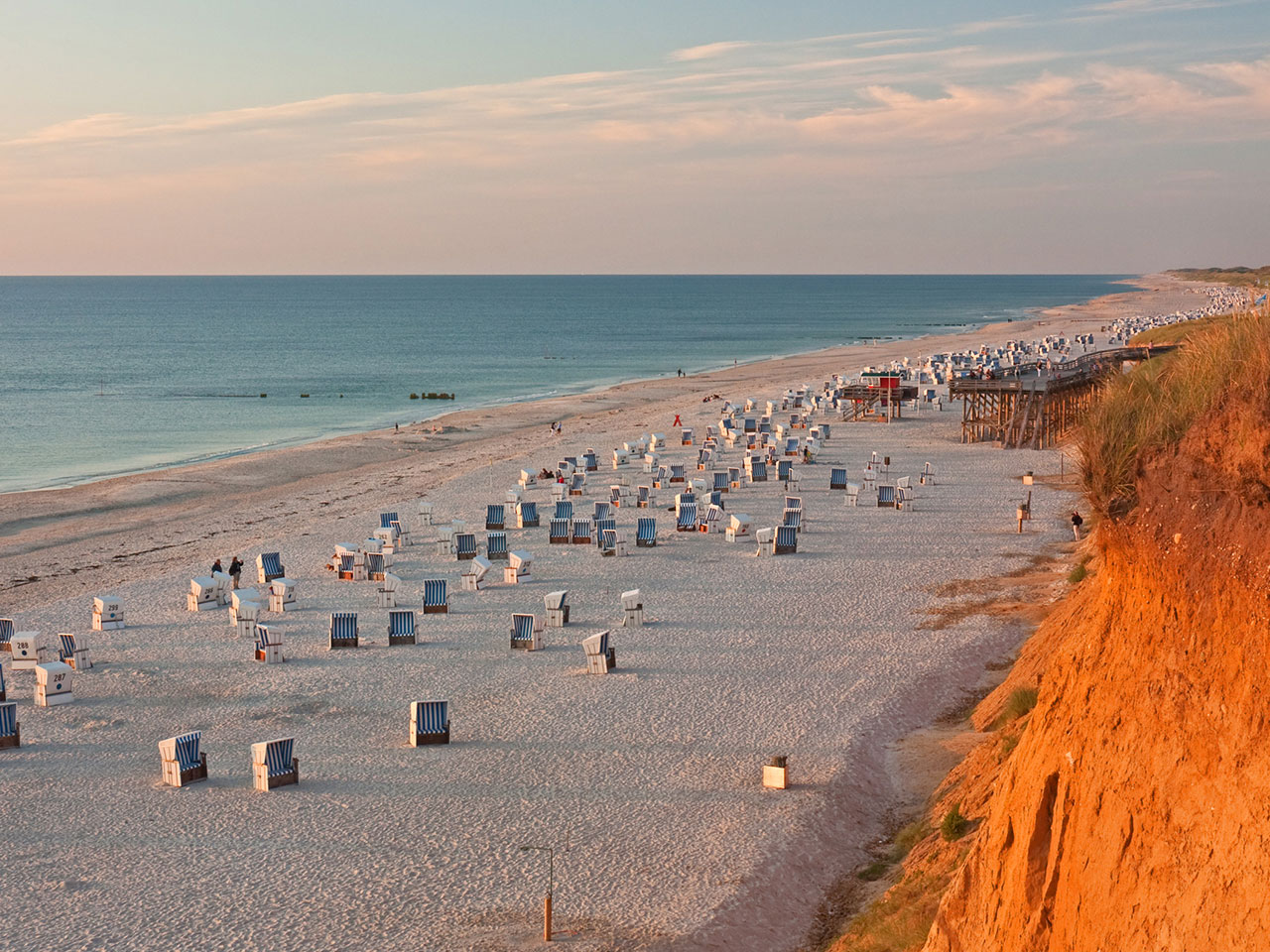 The North Sea is home to Germany’s small yet popular North Frisian Islands. Connected to the mainland by a causeway, Sylt is the largest in the archipelago, at 38km long. The small towns of Westerland and Kampen are popular with Germans keen to shop the high-end designer boutiques and head to the beach in the same day. Sailing, kite surfing, mudflat tours, golf and horse riding are popular pastimes, with plenty of visitors keen to make the most of the 40km of beaches on the island’s west coast.

Possibly the most famous European island, Venice is technically made up of more than 100 tiny islands in an area of roughly 400 square kilometres. The canals twist and turn in a maze even the locals sometimes get lost in. Don’t worry, it’s all part of the experience. A gondola tour is pricey and a little cheesy but it’s one of those must-dos every visitor should cross off their list. Once you’ve also ticked off the Doges Palace and St Marc’s Square, delve deeper into the backstreets and peer into glassblowing workshops dotted around the city. Artists from all over the world descend on the city’s pavilions during the Biennale and the annual Carnival celebrations are a riot of colourful costumes and masks.

Previous post Gents at Sea: the cruising guide for men

Europe for every age and stage