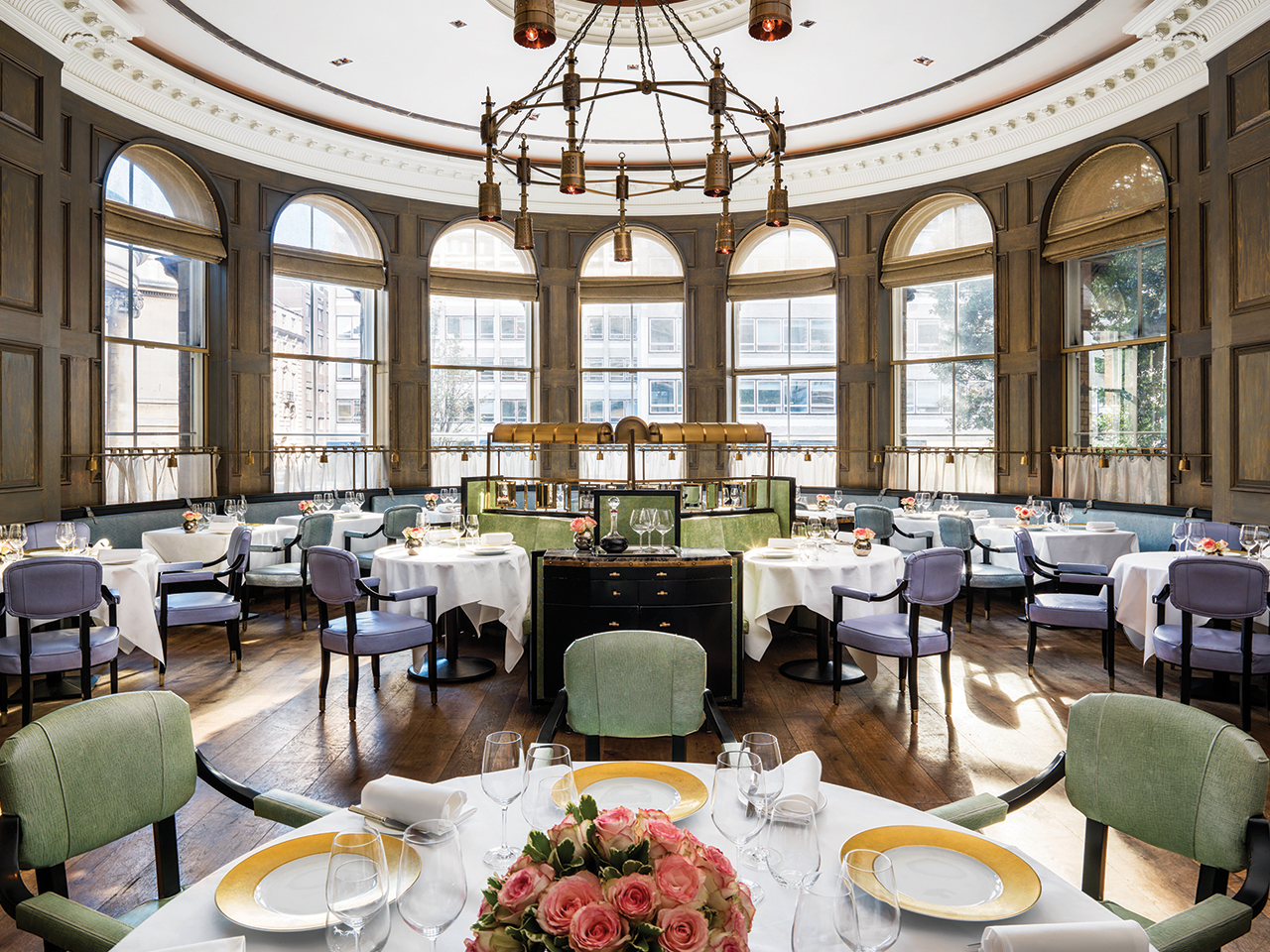 From movie sets to molecular gastronomy, hotel restaurants have become about much more than just food. Here’s Expedia’s Listopedia of the world’s best hotel restaurants and why you should be booking your table now.

Roux at the Landau at The Langham, London, UK

Dating back to 1865, the Langham London has been well known to Londoners as a home for high end fine dining. And now the world knows it too – this year the restaurant was immortalised on the silver screen with a starring role in Burnt, the Hollywood blockbuster featuring Bradley Cooper as a Michelin-starred chef on a mission to win his third star. The Langham’s actual restaurant, the Roux at The Landau, was the setting for filming, and in real life is manned by father and son Albert and Michel Roux Jr focusing on modern French cuisine. A meal inside the opulent dining room, lined with beautiful arched windows, is a feast for all the senses.

If you’re after an extra special meal in Sydney, the Bentley Restaurant and Bar inside Radisson Blu Sydney will knock your socks off. The heritage-listed building may date back to 1865 but this restaurant is very, very modern. From the black rod art installations hanging from the ceiling to the crumbs and foams that find their way onto your dinner plate, the Bentley showcases modern dining done well. 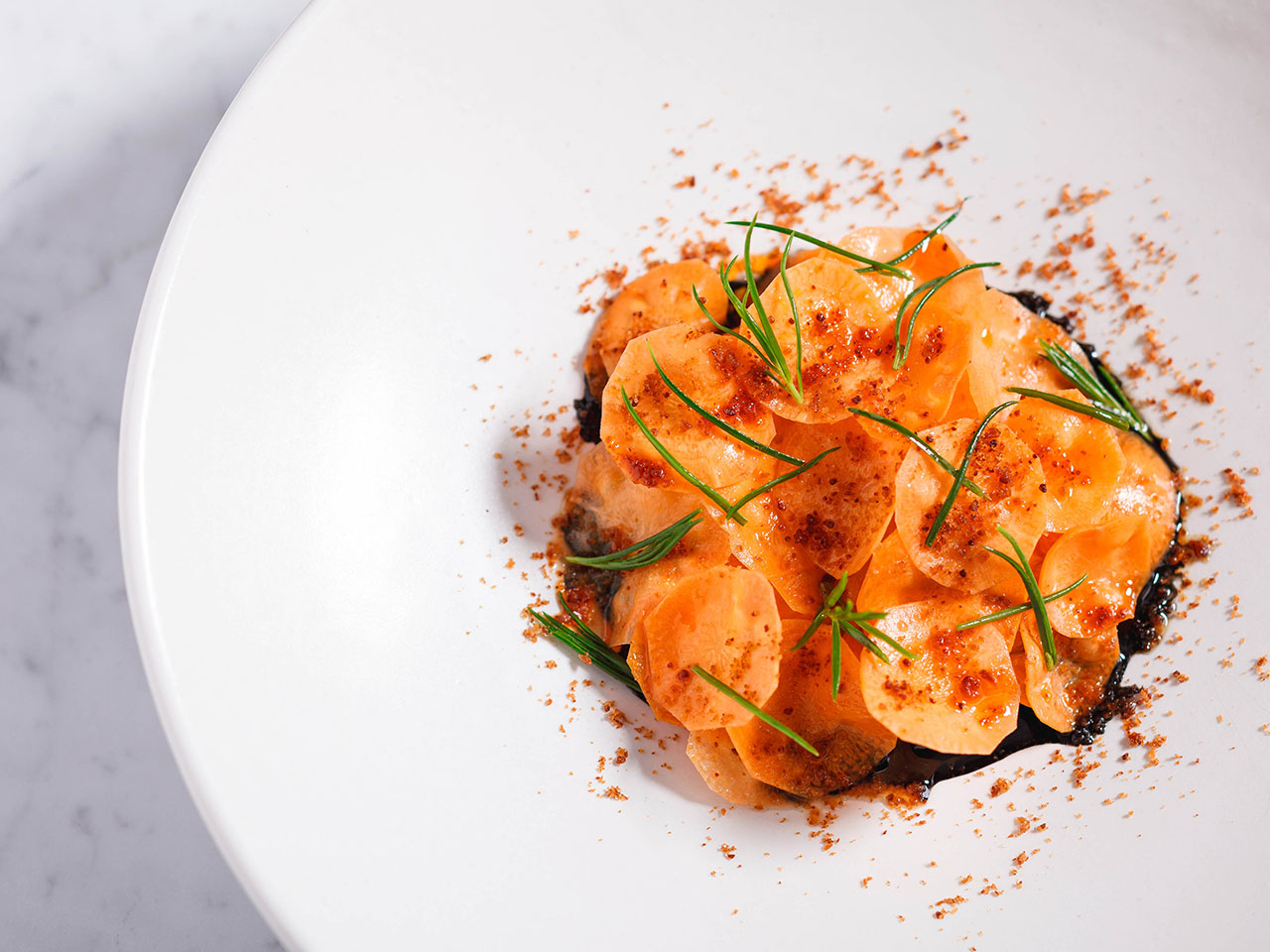 Fine dining, five star hotels and New York city go hand in hand. So how do you stand out from the crowd? The Le Parker Meridien bucked the trend when it opened a burger bar in its ground floor back corridor. A small neon burger is the only sign to this hidden hot spot. Walk through the lobby, down a side corridor and into the small no frills bar where the burgers are pumped out fresh and fast.

Al fresco dining takes on new meaning when you’re sitting right on the Grand Canal. The Club Del Doge Restaurant inside The Gritti Palace perches right out over the canal, and is perfect for people watching as the gondolas pass by. The former palace dates back to 1475 when it was commissioned by the then Doge of Venice, Andrea Gritti and has been restored to its former, formal glory. Expect waiters wearing tuxedos, silver platters and a showcase of Italy’s premium produce – the truffle risotto is legendary.

What celebrity chef wouldn’t jump at the chance to spend a day cooking for one of the world’s most unusual restaurants? This tiny pocket of paradise attracts chefs, foodies and wine connoisseurs from all over the world and takes dining to new levels – and even underground. Like most Maldivian resorts, you can dine over water, on a private beach or in your own villa, but at PER AQUUM Huvafen Fushi you can dine underground. Vinum is the hotel’s underground wine cellar and is located eight meters below the island. Home to more than 6,000 bottles of wine and champagne, it hosts extra special dinners prepared by chefs from around the world. In January guests will get to sample the fare by Australia’s own Chef Nelly Robinson from nel. Restaurant as part of the hotel’s PULSE series. 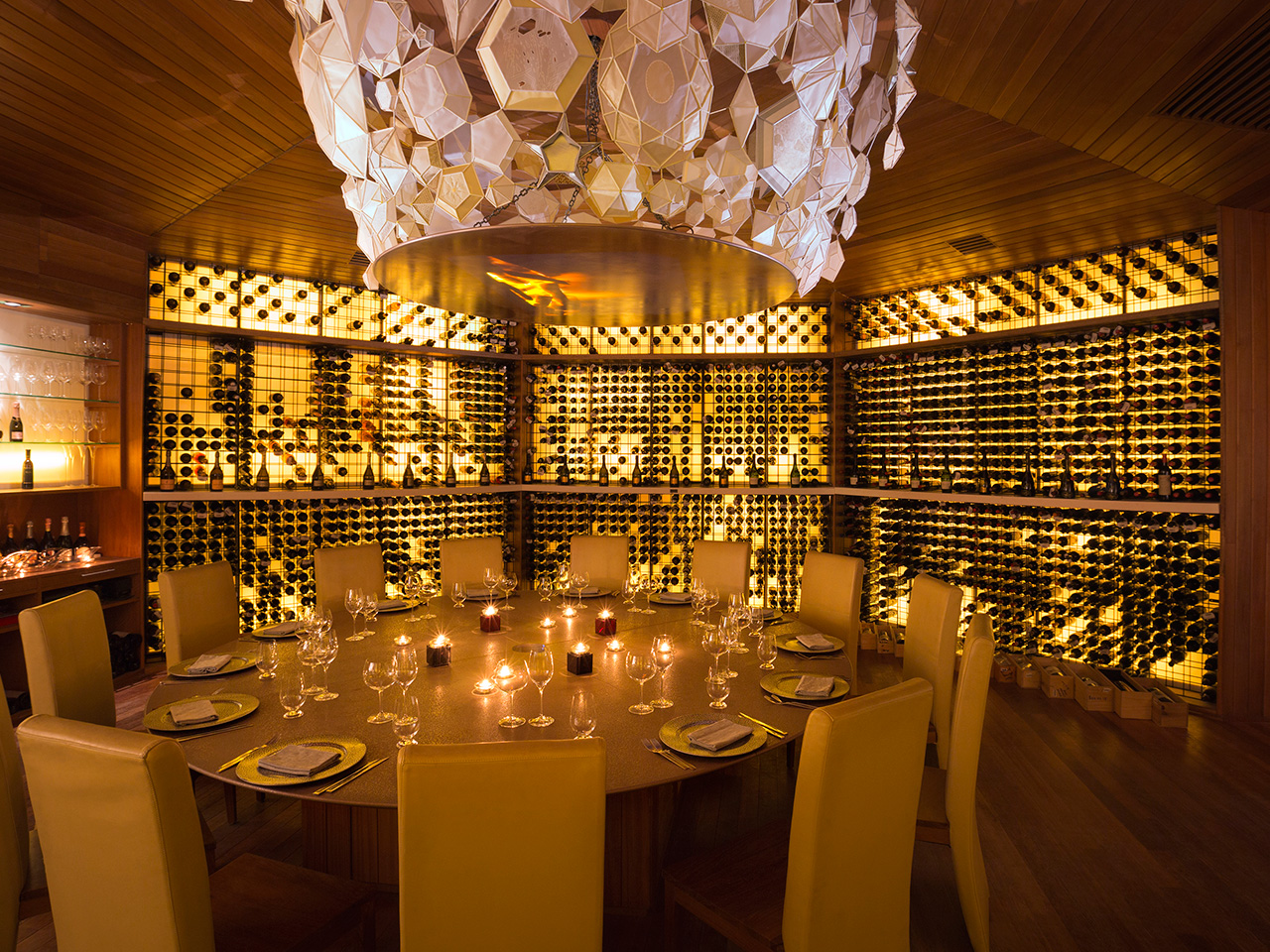 Take your taste buds to the next level with dinner in the clouds at At.Mosphere, the Burj Khalifa’s very appropriately named restaurant. The current Guinness World Record Holder for the Highest Restaurant from Ground Level, this restaurant’s window seats are not for those afraid of heights. Look down on Dubai’s city lights from the 122nd floor and catch the hotel’s infamous water fountain light shows while dining on everything from wild Scottish salmon to French guinea fowl. While not technically inside a hotel, all you need to do is catch the lifts down a few floors to check into the Tower’s Armani Hotel, located on the 38th and 39th floors.

Hong Kong has hotels and fine dining restaurants aplenty but Amber at the Mandarin Oriental Landmark is a shining star among many Michelin stars. With two stars to its name, the restaurant is under the guidance of “Culinary Director” aka chef Richard Ekkebus, who brings French food to life with a few other European and local influences. Settle in for the eight course degustation and roll straight to bed afterwards. 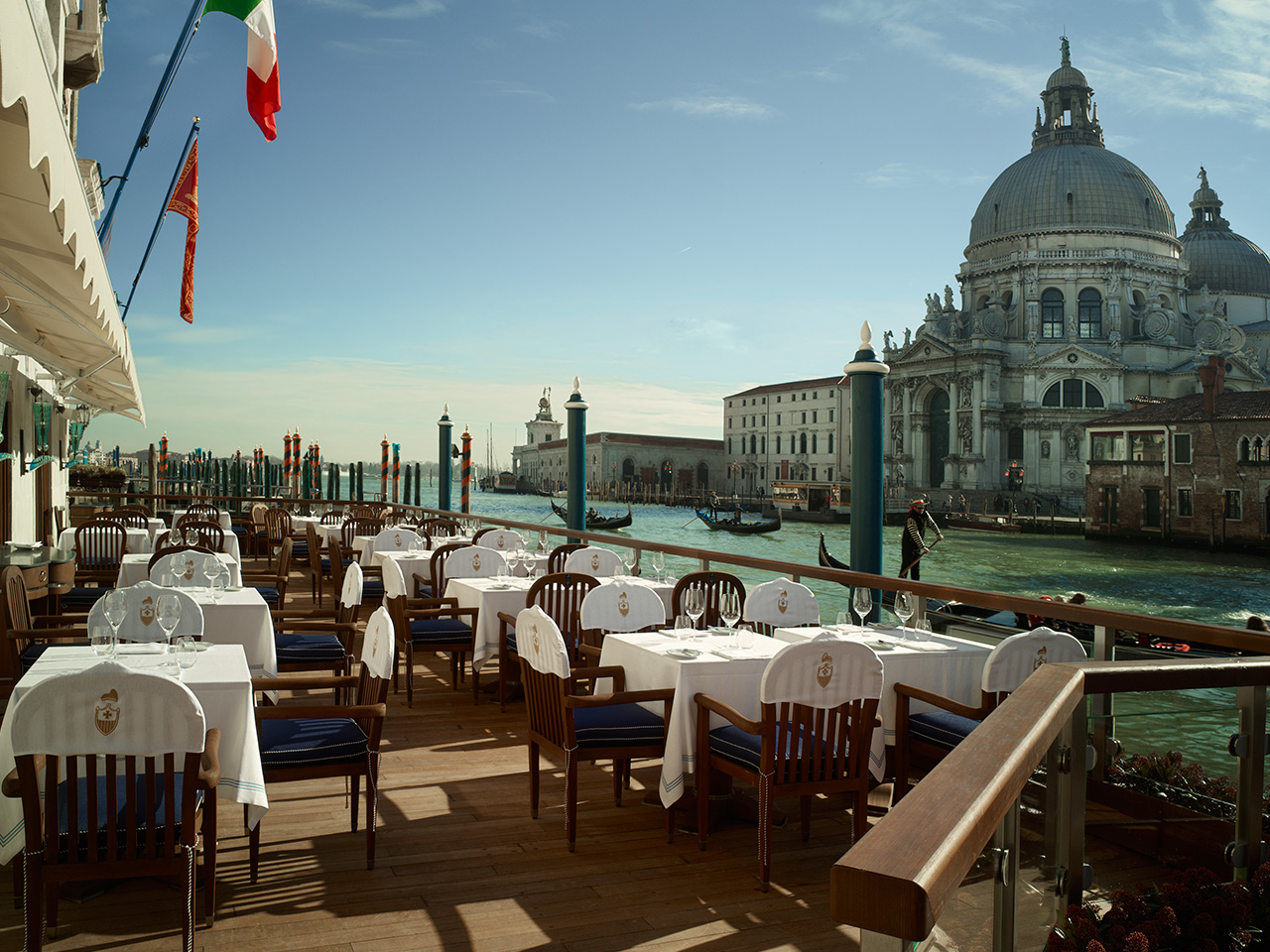 The Polo Lounge at The Beverly Hills Hotel, LA, USA

Celebrity spotters exploring LA should start their day with breakfast at The Polo Lounge at The Beverly Hills Hotel. The bright pink courtyard and its dainty wrought iron garden furniture are the setting for many a celebrity brunch, while the mood-lit tables inside are popular with producers planning their next big blockbuster. The buttermilk pancakes are almost as famous as the guests – everyone from Marilyn Monroe to Michael Jackson have called the Beverly home for the night.

Heston Blumenthal, the molecular magician of the culinary world, has set up his first permanent restaurant outside of the UK at Crown Melbourne. Home to plenty of restaurants, shops, hotels and even a cinema, you hardly need another reason to stop by this sprawling complex but Dinner is definitely another one. Booked out for months, the restaurant’s focus is on 700 years of British fare – each dish on the menu is listed with a date indicating the recipe’s time of origin. From the recipes of King Richard II’s chefs to the chef’s very modern and very famous Meat Fruit, a meal here is one hell of a history lesson. Keep an eye out for a few Australian twists like a lovely lamington cake. 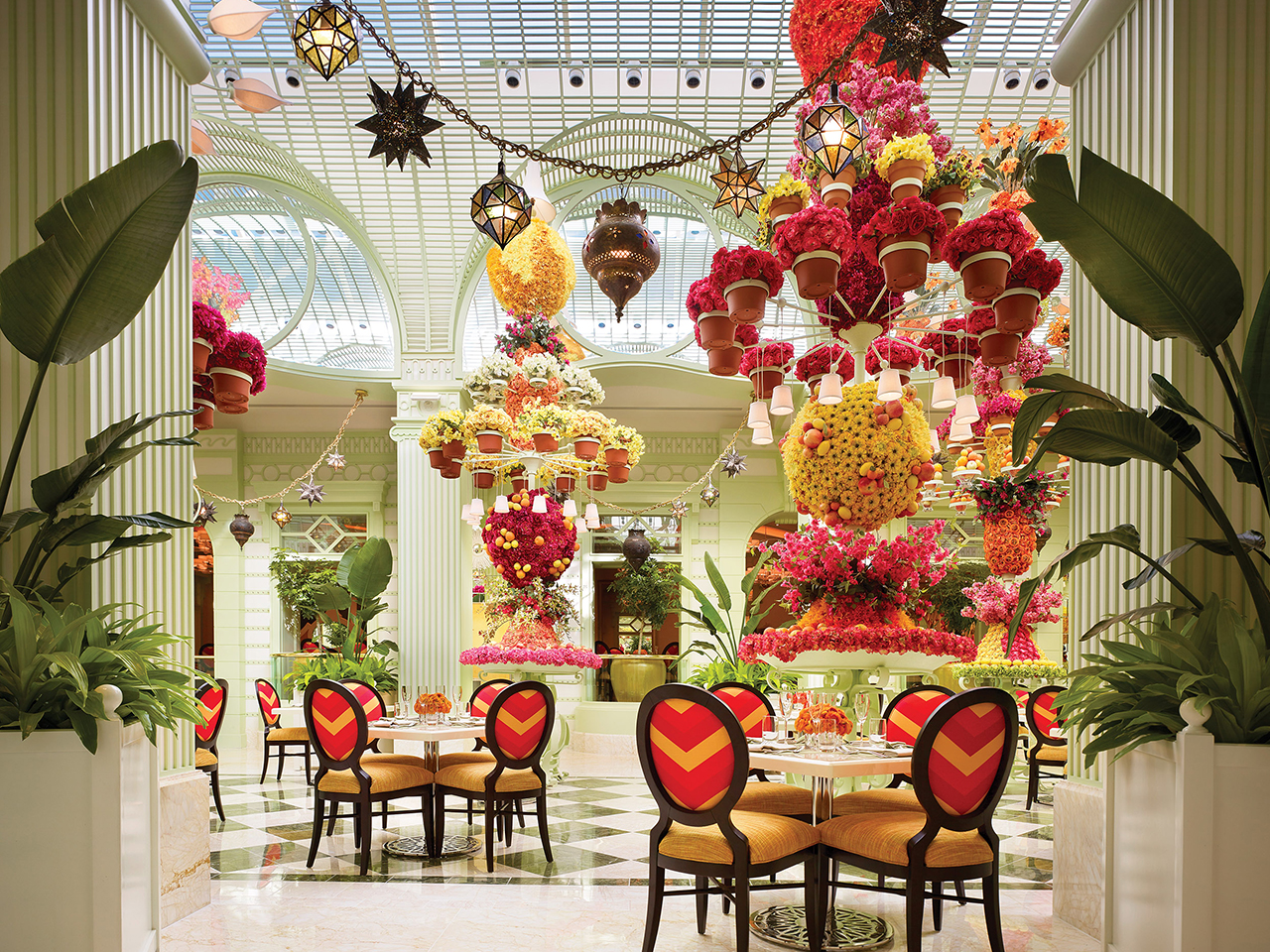 Bigger is better when it comes to Vegas. And in Vegas, the buffets are big business. We’re not just talking about an omelette bar and a cereal station. The Wynn’s elaborate spread will set you up for an entire day in Sin City. Open for breakfast, lunch and dinner during the week and brunch on weekends, the buffet’s 15 different stations offer everything from Australian T-bones to chocolate fountains. Whether you want waffles and fried chicken or a vegan choc chip cookie, the Buffet caters to just about everyone. Grab a table underneath the towering floral arrangement and settle in.