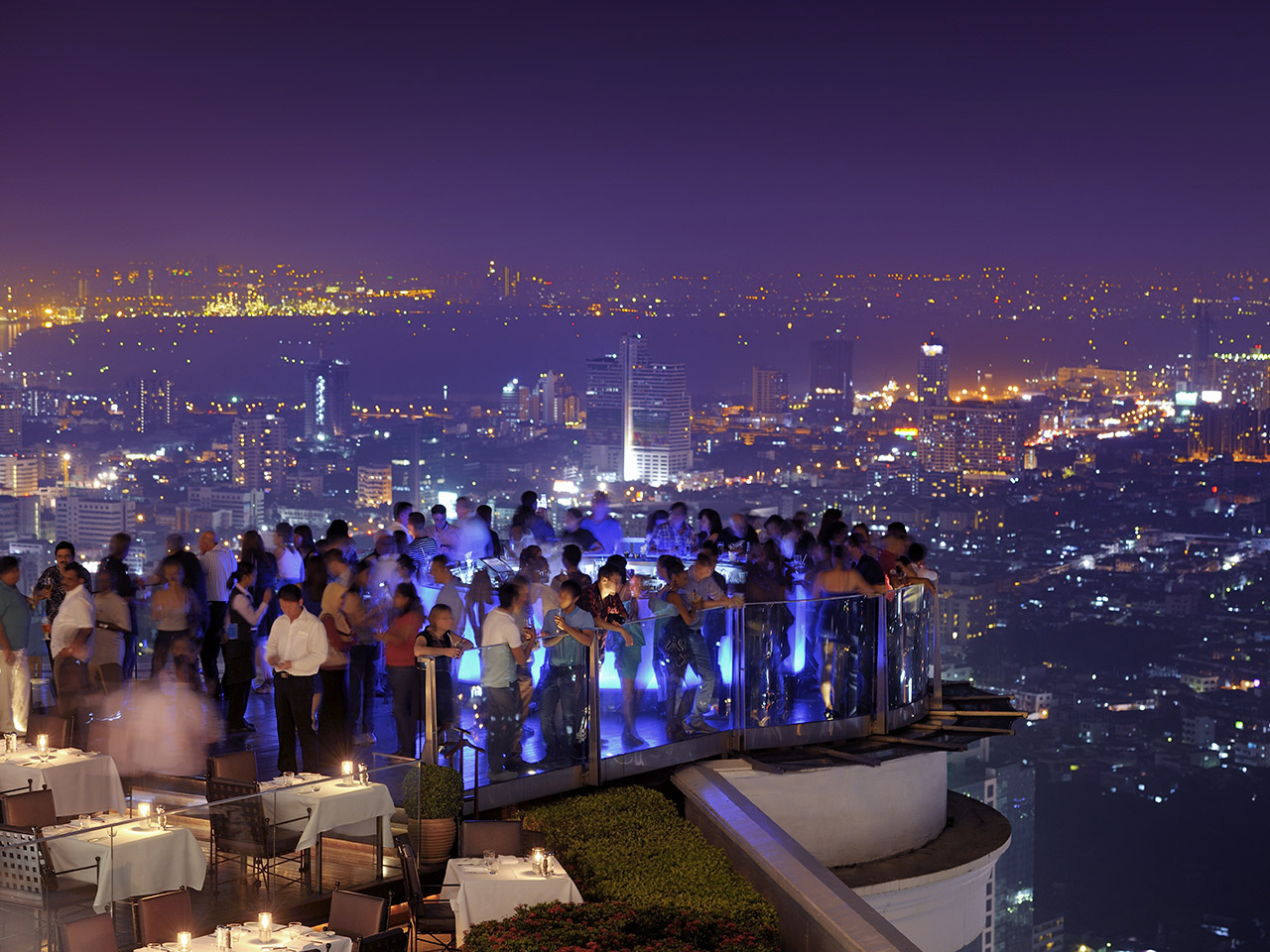 After a long day of sightseeing, there’s nothing like an icy cold drink looking down on the city you’ve just explored. Seeing it spread out below you, glittering with street lamps and office lights, is just the icing on the cake. Whether it’s from the rooftop of a hipster hangout in New York or perched over a Cliffside in Bali, here’s Expedia’s Listopedia of 10 bars with mindblowing views.

Catapulted to fame by its staring role in the Hangover II, this bar is not for the acrophobics out there. If you’re scared of heights you won’t enjoy sipping a drink while jutting out over the street. The bar sits on the 63rd floor of the lebua at State Tower hotel. The giant dome soaring above you is almost as distracting as the views out over the Chao Phraya River. Almost.

It’s no Oval Office but the POV (Point of View) bar inside Washington D.C.’s W Hotel is the spot to see the high powered politics unfold. Head straight up to the 11th floor terrace of this funky hotel, walk past the “red tape” graffiti walls, grab a drink at the bar and head to the balcony. Sightseeing done. Some of America’s most famous landmarks are right in front of you – look out at the Lincoln Memorial, the Washington Monument, the White House and Pentagon. You might not be privy to the inner workings of cabinet over your cocktail, but keep your eyes and ears peeled because this is a popular watering hole for the pollies.

The Cinque Terre has a monopoly on dramatic coastlines – the UNESCO World Heritage region’s five towns are simply bellissimo. The famous walk takes you along the coast between the five towns – start out early to make time for an Aperol Spritz at A Pie’ de Ma’, Riomaggiore’s famous cliff side bar. The simple terrace needs no decoration, because it’s the view you’re here to look at. Waves crash just a few metres below and as the sun sets, move on to an Italian wine and a charcuterie board. 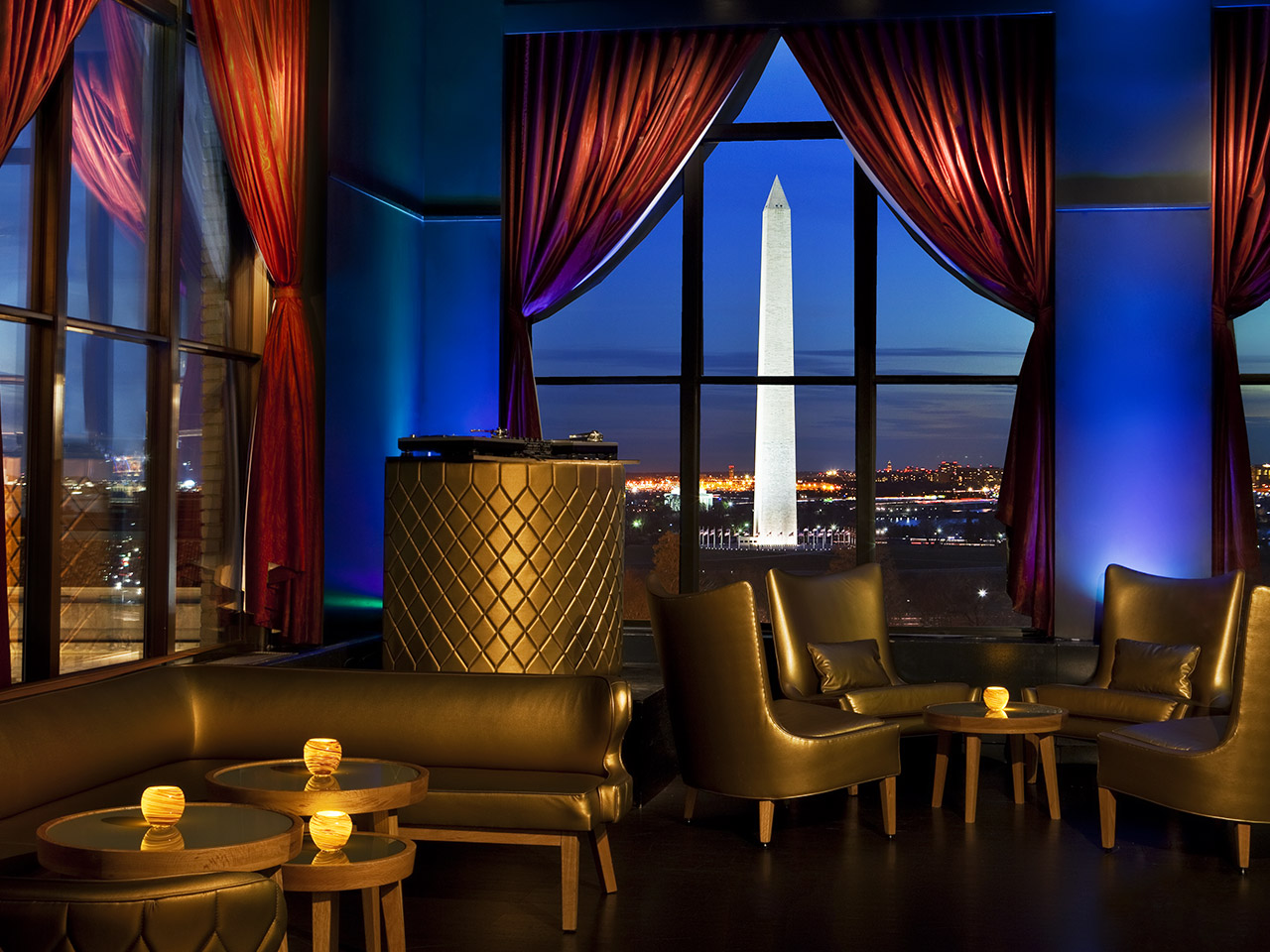 Bali’s bar scene is legendary – from beach bar Bintangs to high rise hotel clubs, you’re never far from a drink and a killer view. But if there’s one spot you need to settle in for a sunset session, it’s this famous bar. Perched out over the cliffs on the Jimbaran coastline, the Rock Bar has 180 degree views out over the ocean. The bar itself is part of Ayana Hotel, but you don’t need to be a guest to partake in cocktails with a side of sunset. Follow the signs through the sprawling grounds to the inclinator that makes the short journey down to the bar – the line starts a few hours before sunset, so arrive early, or ask for the directions to the stairs. It’s only a short walk down. Leave your heels at home though!

Five star hotels often have very fancy bars but at Adelaide’s newest establishment Hennessy Bar, the focus is on comfortable chic – think cow skin rugs, plush couches, dainty crystal chandeliers and an open air deck where the city unfolds beneath you. Tucked right underneath the heritage listed building’s sloped roof, the bar showcases some of the region’s best wines and in a nod to the building’s history, is named after the original architects Hennessy & Hennessy. Grab a Barossa Shiraz and settle in for the evening. There are also plenty of French champagnes if you’d prefer – perfect for a drink out on the terrace.

Londoners love their pubs so it has to be a very special type of watering hole to steer them off the streets and up into the skyline. The DoubleTree by Hilton Hotel’s outdoor terrace has a secret weapon – a stellar view of the city skyline. The best tables look straight across to the Gherkin and the financial district. On a sunny summer evening, it’s the perfect spot for a few drinks as the sun goes down.

Queenstown’s marvelous mountains are an adrenalin junkie playground year round, but don’t worry, if you’d rather admire a mountain peak than climb, bike or ski it, the Stratosfare Bar is the spot for you. All you need to do to get there is ride one of the steepest cable cars in the world up 450 metres to Bob’s Peak. Easy! Seriously though, the Skyline cable car safely delivers you to Stratosfare, a bar with 220 degree views out over Lake Wakatipu. Window seat, wine and one of the world’s best views without even putting on your sneakers.

You need luck, skill and a lot of money to get a seat at the big tables in Vegas – but at Ghost Bar, you’re a winner from every angle. The outdoor terrace on the Palms Hotel’s 55th floor has 360 degree views of Sin City. Look down on the crowded Strip from this swish bar’s outdoor or indoor areas. The 14 foot floor to ceiling glass windows give guests inside the bar an excellent vantage point too. So order a Lucky Charm or two and get ready to party.

One of Melbourne’s most exclusive, expensive restaurants, Vue de Monde, might be out of reach of your holiday budget, but it’s sister bar is a great spot to sample the finest tipples and vistas the city has to offer. Get dressed up and ride the lift up to Level 55 of the Rialto Building views for a cocktail and canapés – expect crystal cut glasses, smoking liquid nitrogen and intimate mood lighting served up on the same floor as the award winning restaurant. 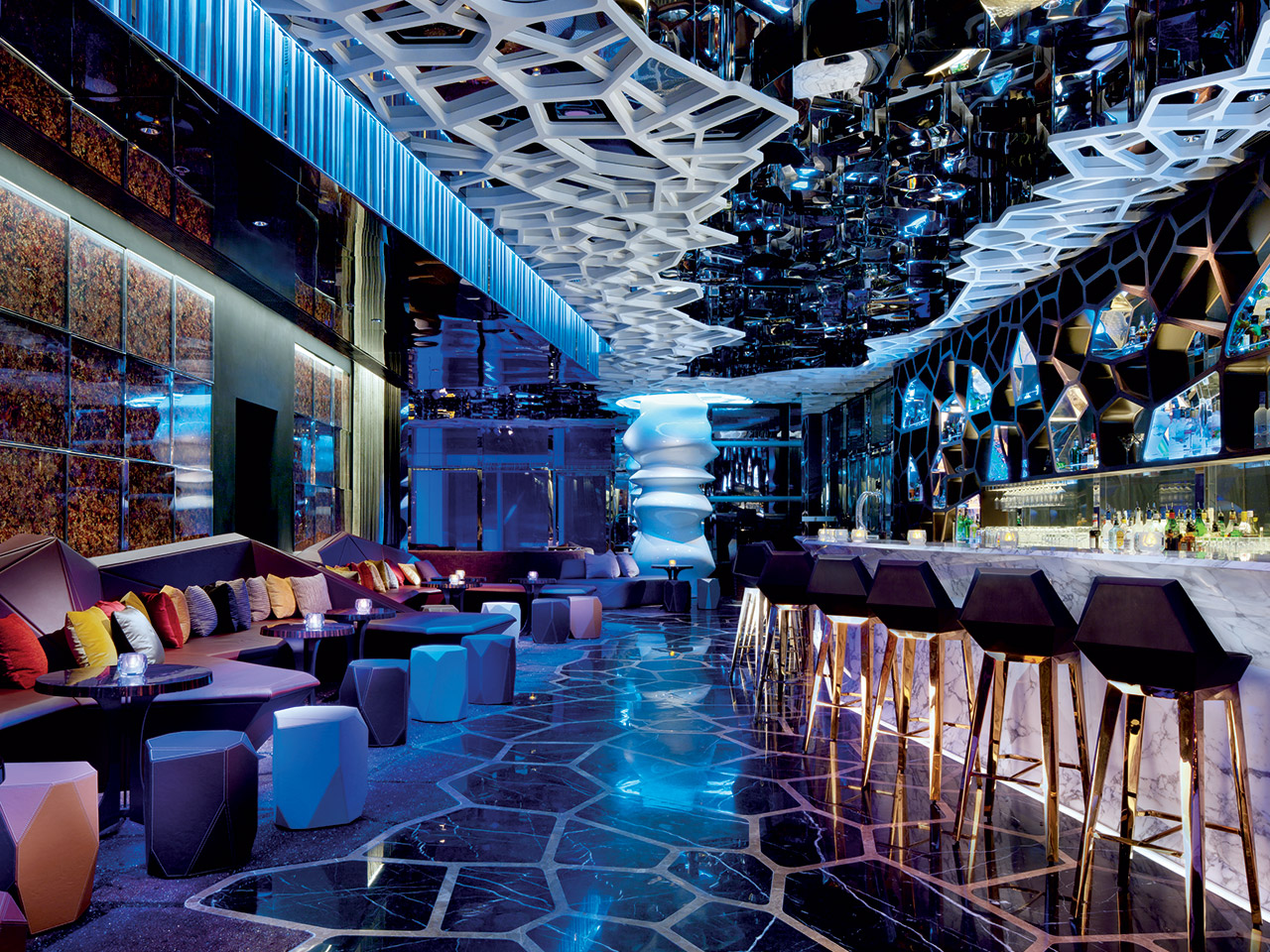 The highest bar in Hong Kong has one hell of a view. Look down from the 118th floor of the five star The Ritz Carlton Hotel and marvel at the city lights way down below while sipping on cocktails. You’re sitting almost in the stars up here so the décor is appropriately other worldly, with psychedelic lighting, tessellated marble floors, honeycombed wall art and globular sculptures. The windowside tables are hot property so head up early and settle in.

Sydney’s piece de resistance has and always will be its beautiful harbour. The bright lights of the Harbour Bridge, Opera House, ferries, commuters and buildings paint a brilliant picture once the sun has gone down. The best view in town is from Shangri-La Sydney’s Blu Bar on level 36. As the name suggests, ride the lift right up to the 36th floor and ask for a window seat. Bar stools by the bar have great views out to the Anzac bridge but it’s the low chairs tucked in to the right of the bar and lounge that have the best views of Circular Quay. Altitude Restaurant next door has an even better vantage point so continue the night with dinner.