Afternoon Tea at The Majestic 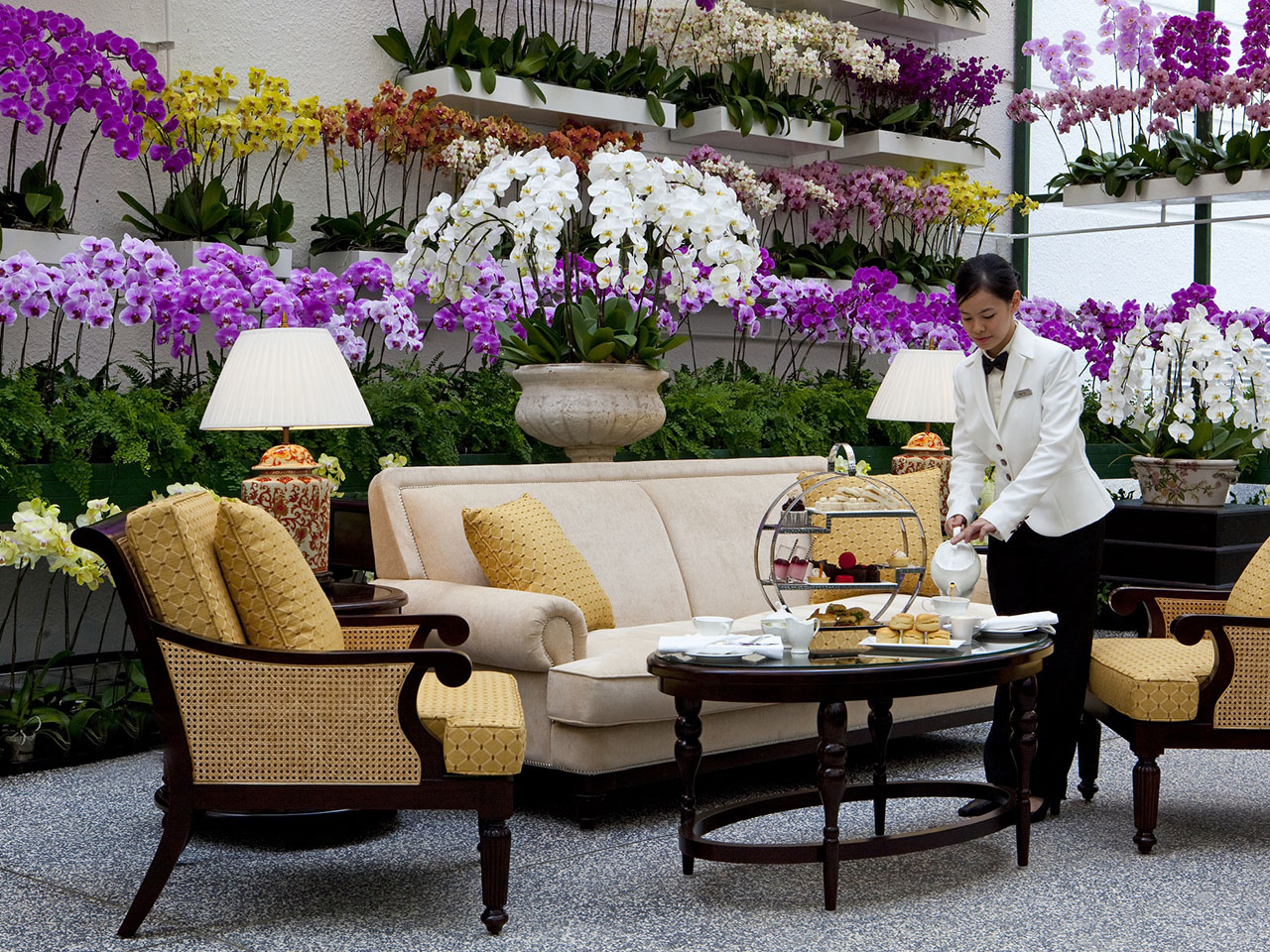 Swirling ceiling fans, dark cane plantation chairs, art deco flourishes in pristine white against a sophisticated beige palette, palms adding a luscious splash of green. It sounds like such a cliché, but walking into the Tea Lounge of The Majestic Hotel in Kuala Lumpur really does feel like stepping back in time – you could almost believe you’ve stumbled into a smart colonial mansion.

First opening in 1932, this lavish establishment dominated the city’s hotel scene for half a century, before closing and undergoing extensive renovations that included the addition of a more modern wing aimed at business travellers, a tranquil spa in the old servants’ quarters and a downstairs screening room and speakeasy-style cocktail bar.

The Majestic reopened in late 2012, and the restored Tea Lounge, Orchid Conservatory and bedroom suites that fill the historic Heritage Wing have not only recreated but also superseded the establishment’s former grandeur. It’s hard to believe such a tranquil space exists just minutes from the bustling Central Market, another art deco gem filled with boutiques and craft shops.

In a bid to escape the city’s oppressive heat for a few hours, we headed along for afternoon tea which is held daily in a room decorated with pretty blue-and-white china plates and sepia-toned photographs of Kuala Lumpur. The centerpiece of the room, aside from the dark wooden bar which has a kind of Mad Men appeal, is the gold domed ceiling under which sits a grand piano. The roof feature originally served as an extractor fan, and it’s just one example of how lovingly this place has been brought up to date. And yes, the piano is put to good use every afternoon Mr Ooi, who is something of an institution on the Malaysian music scene.

Sinking into our armchairs, we sip on one of the first of many cups of tea. The white-jacketed staff are keen to keep everyone’s cups topped up, and teapots sit on heated stands around the room, ensuring the refreshing brew maintains its optimal temperature.

And then it arrives. A circular cake stand stacked with savouries – cream cheese and cucumber sandwiches, smoked salmon rolls, and egg mayonnaise ciabatta – and scones. Freshly baked, they come with a liberal serve of clotted cream and homemade jam. 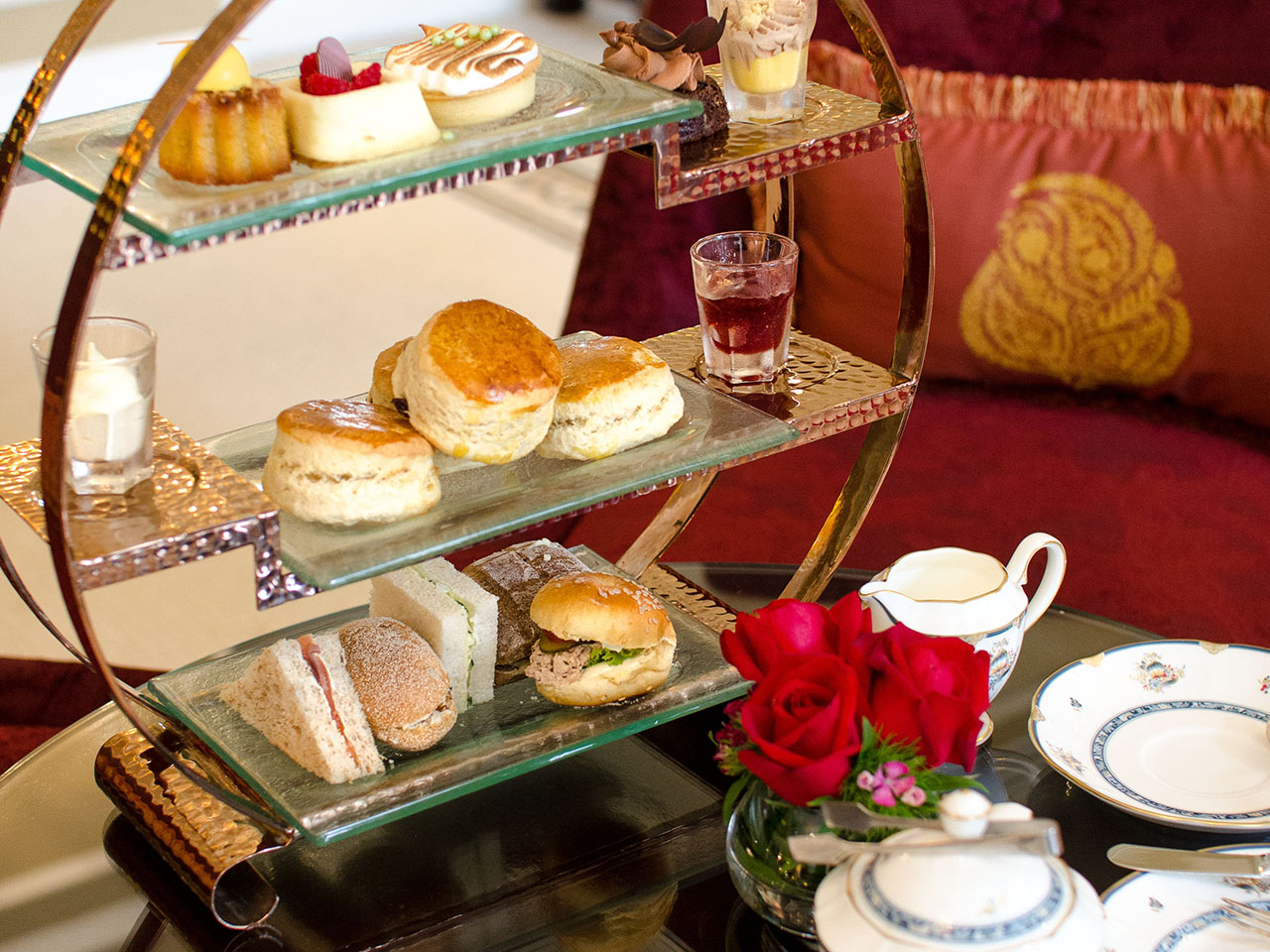 But before you get too stuck into the sweet treats, a square copper hot box filled with steamed seafood treats – prawn toast, spring rolls, fish cakes – arrives. It sums up The Majestic perfectly, the best of England and the Orient in one sitting.

For ‘pudding’ there’s a mini raspberry cheesecake, lemon meringue, mango canelle and chocolate fondant. It’s decadent and delicious. I could spend hours sitting in the lounge, but then I walk past The Orchid Conservatory and, suddenly, I’m in love. Glass lanterns cast a warm glow over the pastel-coloured petals and against my better judgment I’m in there, brandishing by iPhone like a thing possessed. It’s simply stunning and no wonder it’s the scene of hundreds of wedding parties, birthday celebrations and surprise proposals every year, but anyone can take afternoon tea here so long as they book in advance. I have a feeling I’ll be back to feast on fluffy scones among the flowers very soon.

The whole experience, and it is an experience to be in a place like The Majestic, is very smart and very special, but thankfully the service is friendly as opposed to formal, and you could easily set up camp here for the afternoon, swap tea for a G&T and stay for the evening jazz band performance which kicks off at 7:30pm.

And if that means dinner is on the cards, you’ll find the hotel’s original dishes – a mix of colonial home comforts and Hainanese cooking shines through in a menu that features a chicken version of Britain’s beloved pork chop, mulligatawny soup and spotted dick with custard.