Guide to getting married in Hawaii - Expedia Australia Travel Blog

Guide to getting married in Hawaii 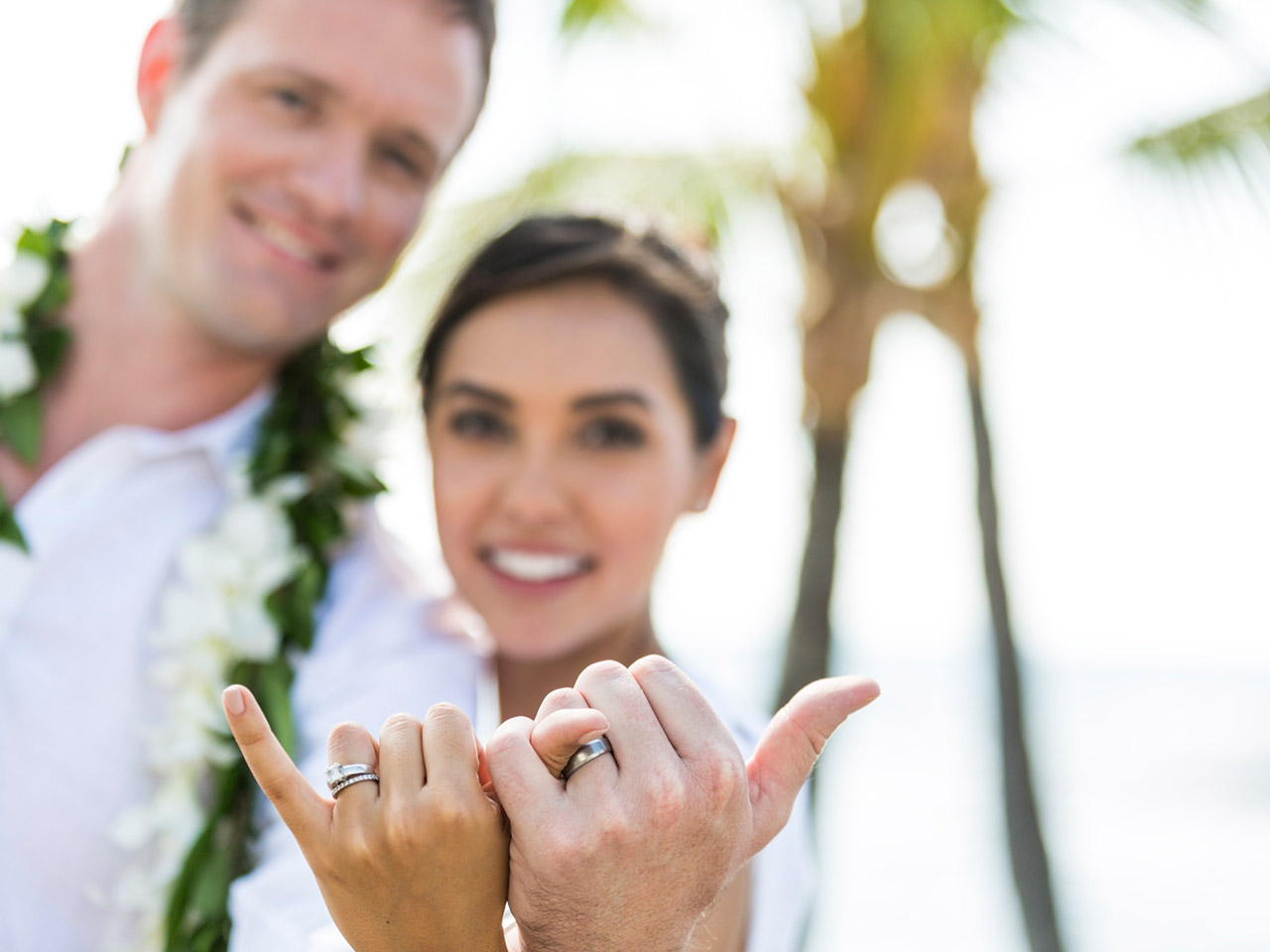 There’s so much more to getting hitched than finding the perfect Hawaii accommodation. Read on for everything you need to know to put a ring on it, Hawaiian-style.

The State of Hawaii issues marriage licences and has a system that makes it easy for couples to fill out and pay for their licence online. Keep in mind that you’ll need to finalise the licence in person with a state marriage licence agent so make sure you have enough time to take care of that before the ceremony.

You also both need to be over 18, must both appear before the marriage licence agent at the time of application, show official proof of age in the form of a birth certificate or a driver’s licence, and you will need to pay a USD$65 fee.

It is legal for same sex couples to get married in Hawaii.

Ordained ministers and other religious officials, in addition to active and retired federal and state judges serving in Hawaii, may register to obtain an official licence to perform marriages. Officiants must file marriage licences with the wedding venue island’s Department of Health online or via postal mail within three business days of the ceremony. There are also loads of celebrants who can marry you. The main thing to remember is to book well in advance in order to secure the celebrant of your dreams.

If you are Catholic, you can apply to get married in a Hawaiian church following these instructions. For all other faiths, including Episcopalian, the best thing to do is find a church near where you are staying and contact them directly (staff at your hotel should be able to assist with this). The local officiant will be able to tell you what you need to do to organise a suitable ceremony.

Getting married outdoors is a very popular choice but there are some restrictions to be aware of. You will need a permit, as well as liability insurance, to conduct a wedding at a beach that is not part of a state park. The easiest way to organise this is to contact a local wedding planner as they can manage the permits and insurance on your behalf.

According to TheKnot.com, Hawaii beach weddings are not allowed to take longer than two hours, have more than 30 guests in attendance (a bigger guest list equals additional permissions), cannot involve decorations or marquees, and chairs can only be used for elderly or disabled guests.

Fortunately, Hawaiians have been organising weddings forever so the locals will know exactly what to do to bring your ideas to life. Many venues offer the services of an in-house planner as part of their wedding packages, and there are also many freelance wedding planners who can help you pull all the elements together seamlessly. 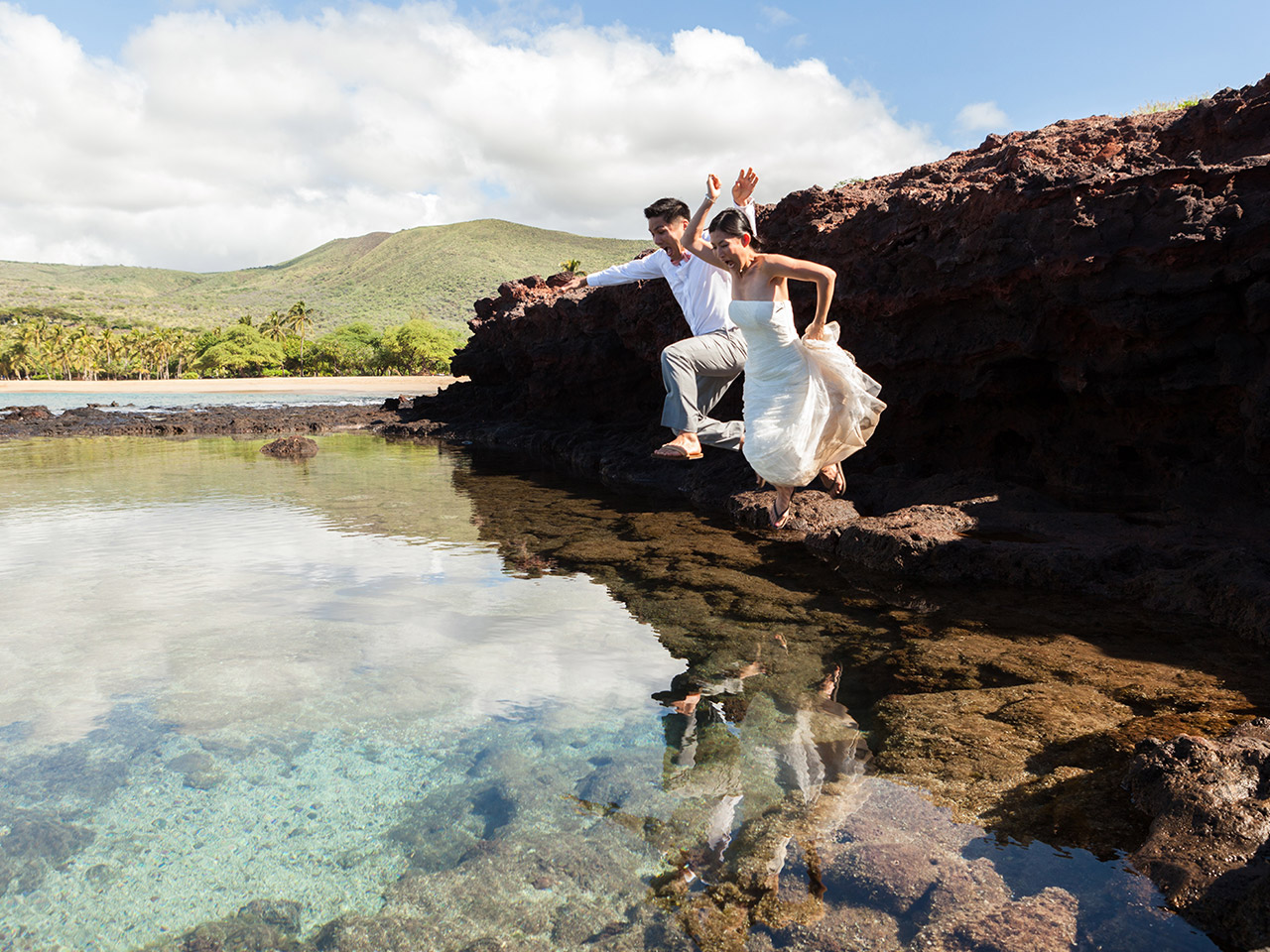 One of the most famous places to get married in Hawaii is without a doubt the Moana Surfrider located right on Waikiki Beach. This hotel hosts several weddings a day on-site, and is also a popular location for photo shoots (sitting on the rocking chairs at the front of the hotel and counting the brides is a popular pastime). The hotel can organise everything from the service, to the catering, flowers and accommodation. It’s also the oldest hotel in Hawaii so you know you’re following in the footsteps of tens of thousands of happy couples.

Located high on a cliff top on the north eastern coast of Kauai, aka The Garden Island, St Regis Princeville is an ideal location for a residential wedding where your guests come and stay for a couple of days. There are two golf courses, as well as activities like zip lining and horse riding, in the nearby vicinity so there’s plenty for guests of all ages to enjoy before and after the big day. Located about 10 minutes’ from Hanalei Bay, made famous by the George Clooney film The Descendants, you could also opt for a ceremony on the beach.

Want to follow in the footsteps of Bill and Melinda Gates? This is where the power couple tied the knot, back in the day when they still owned the resort. Four Seasons Lanai has since changed hands to one of Microsoft’s biggest competitors, Larry Ellison from Oracle Corporation, but it’s still one of Hawaii’s most sought after venues. Celebrity weddings aside, Lanai is one of the smaller, less populated islands and is known as the honeymoon island so why not get the jump on the latter by hosting the former – the wedding – in the same spot.

Located on the western shore of Oahu, Four Seasons Ko Olina is not only a stunning standalone venue, it’s also right next door to the Lanikuhonua Cultural Institute which is a very popular wedding location. Not only does the name mean ‘place of joy’, Lanikuhonua is also a very significant historical site as it was the former home of James Campbell, a business pioneer with deep roots here in Hawai‘i, first purchased lands on the Ewa Plain in 1877 and later developed the great plantations on O‘ahu.

Take me to Hawaii!

Previous post Where to stay in Oahu with kids