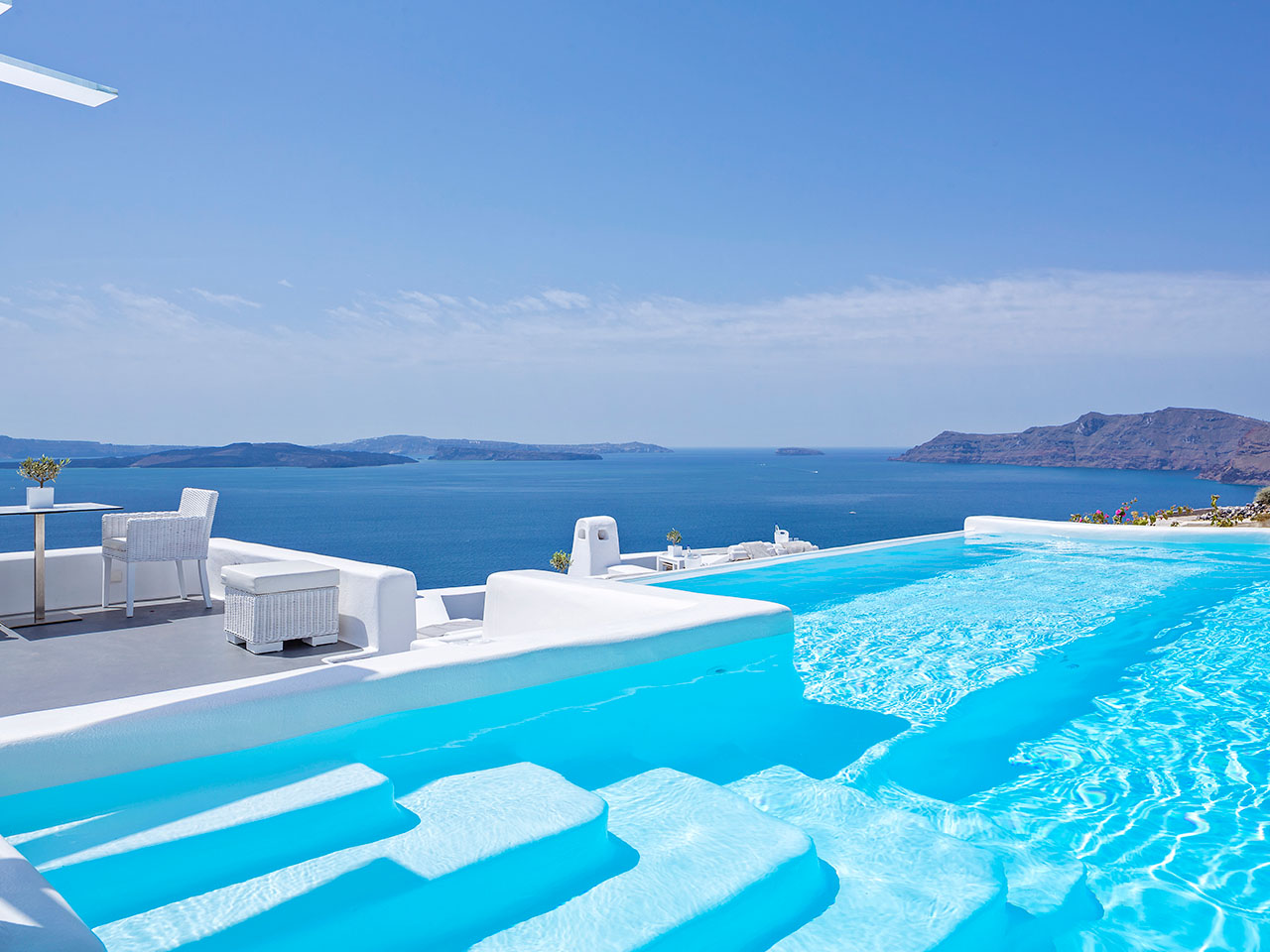 I just returned from some time in Greece and wanted to rub everyone’s nose in it with a post about it. Sorry, I mean, recommend some things.

This is my fifth trip to Greece. I’ve been to the islands of Paros, Ios, Naxos, Santorini, Folegandros, Mykonos, Corfu, Zakynthos and of course, the capital, Athens, where I snuck into the Acropolis at night and had a frappe under the moonlight*.

Here are some of the things I’ve loved and advocate – because I love a recommendation when I travel – on my two favourite Greek islands, although Athens certainly gets a mention.

Handy and a little bit aggressive hint: Go in September. It’s the BEST time to go. The weather is perfect, the sea is at a delicious temperature and there are still enough visitors to make it buzz, but not the heaving crowds you get in July and August.

A deserving bucket-list spot. Santorini is breathtaking. The whole place is the stuff of postcards. (Literally, all those white walls and blue orb churches you’ve seen illustrating the allure of the Greek islands are from here.) I recommend staying in Thira/Fira (town) which will give you more options of, well, everything, and the view is no less spectacular than Oia, which is 15 minutes away on the tip of the island and known as the more expensive, Honeymoony bit. It’s also where the sunset is particularly dazzling/world famous, though, so it’s worth a visit, even if just for the day.

Accommodation on the caldera (cliffside with ocean views) is the opposite of cheap. As with any holiday, it depends on your budget and the kind of view you like to wake up to. That said, some sniffing about could land you a cute cave-style (not nearly as crude as it sounds, it just means they’re built into the side of the island) room on the caldera if your heart is set on it. I stayed in a beautiful place in Thira a few years back called Aria Lito, which is in the main shopping/town part of Thira, but you feel like you’re in an elegantly restored French farmhouse. It’s gorgeous. 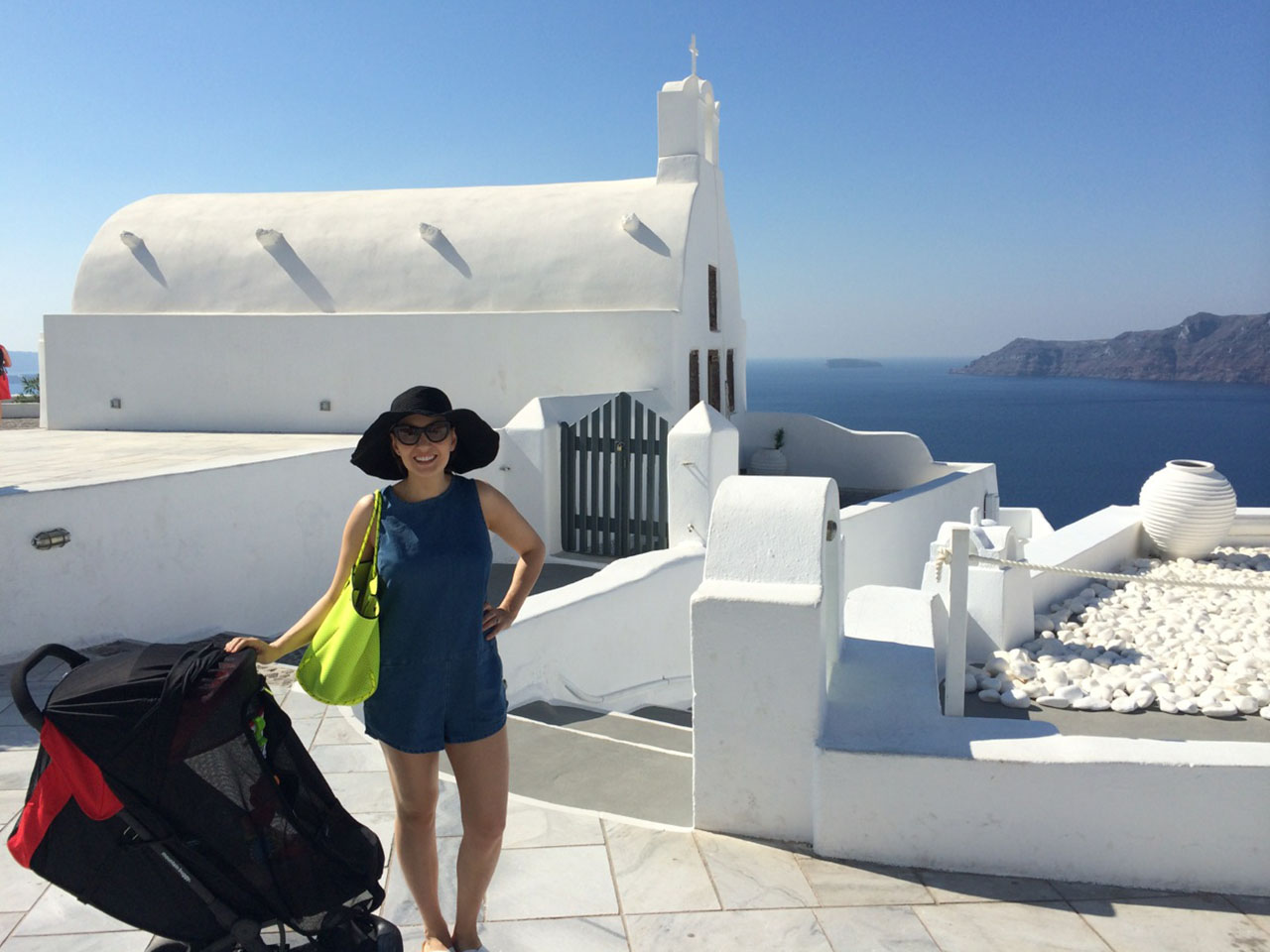 In Oia, everything becomes a lot pricier. We were lucky enough to stay at the Canaves, just outside of Oia, and were rewarded with exceptional views, delicious food and – gasp – a shaded pool, which never happens. (But which you definitely want with a baby.) My mum and dad stayed in Oia at the much cheaper Chelidonia Villas a few years back and were thrilled with it, so definitely check them out.

Go out on a boat (book one late in the day so you see the sunset from the water) and swim in the thermal springs. It smells putrid but there’s something exhilarating about swimming in warm volcanic water.

Ambrosia is probably the best restaurant in Oia, with its Shakespeare-style balconies and climbing flowers, and as for Thira, well, I hate to say it, but since it’s so massively geared towards tourists, it’s essentially 600 shades of the same. Lunch on the caldera is still incredible, though, for the views and the cruise ships criss-crossing like toy ships down below, and the sweet scent of donkey excrement slightly flavouring your lunch. Ahem. 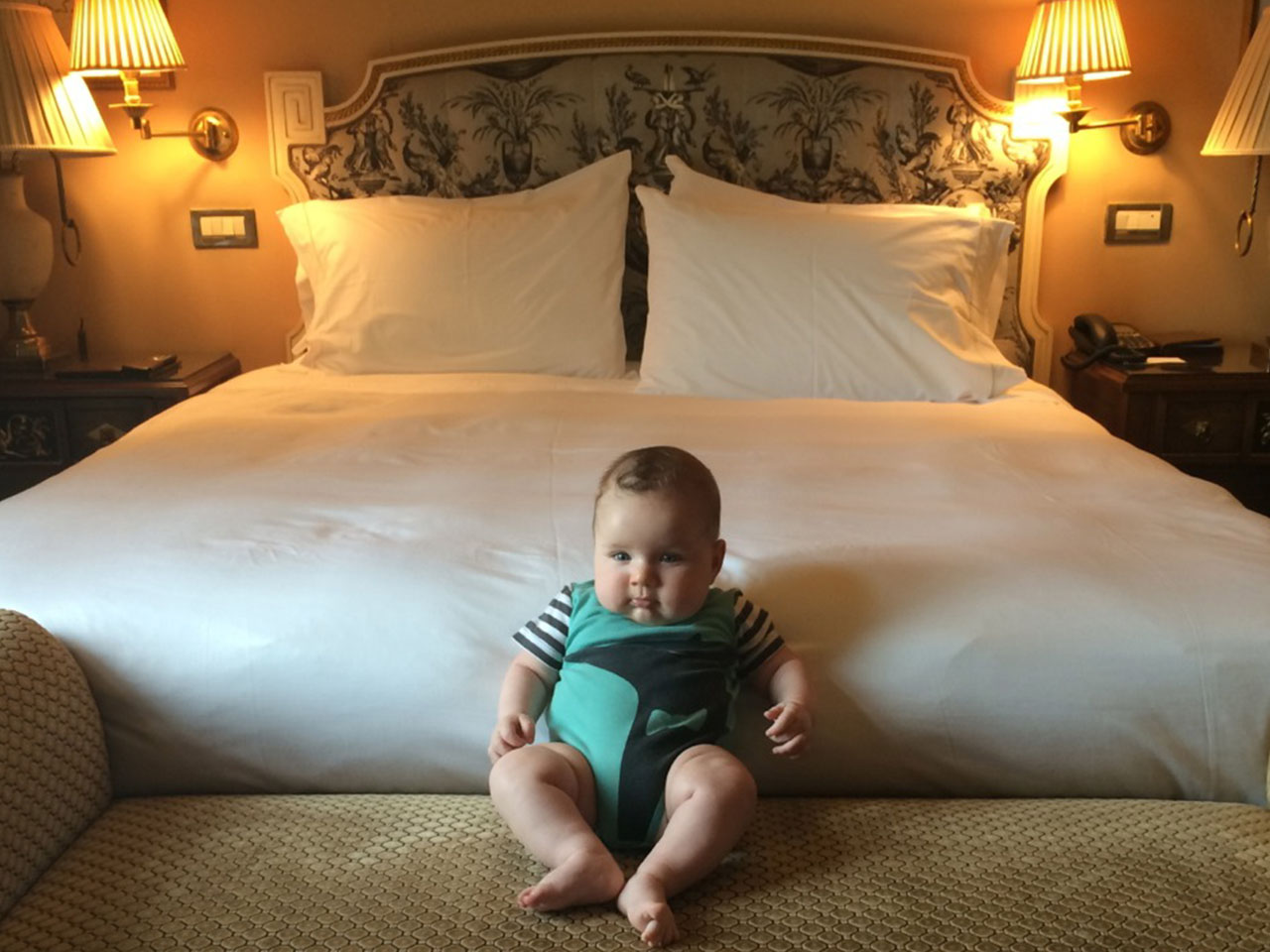 This is my favourite island, because of its size, and its multitude of options for all walks of life. You can pour into the Mykonos port as a backpacker, or a camper, or a club rat, a bar hopper, a foodie, a millionaire, a Texan couple in your seventies, honeymooners, or a family, or whatever: it caters to all. It’s chic, and it’s a bit touristy and wrongo all at once and it all just works.

I love Psarou beach, (home of the famous Nammos restaurant, which you must go to for your blow-out meal of the trip, because the food is delicious, and it’s all sexy and sceney, and at about 4 or 5 pm a DJ comes on and everyone dances on tables, and are encouraged to do so. I had my 30th birthday here and it was GLORIOUS) and I generally stay right on or near it, in Platis Gialos. There are loads of places to stay around here, for all budgets. (I have stayed at the Nissaki Boutique Hotel with friends several times and love it. Their Greek yoghurt is second to none.)

From Platis Gialos you can get a bus into Mykonos town (taxis are scarce), or a little boat around to Paraga, which is another beautiful beach with a cruisy feel (and a delicious restaurant called Nikolas Taverna). Paraga is on the way to Paradise Beach should you be inclined to ride your quad there (FOR THE LOVE OF TZATZIKI BE CAREFUL AND DEFINITELY WEAR A HELMET) and watch/participate in the world-famous mess that is Tropicana beach club. You gotta do it at least once.

This time we stayed at the Grace Mykonos, which is on Agios Stefanos beach, on the other side of Mykonos town near the new port, and it was very chilled and beautiful. A bit easier with a baby getting around too, as we were only three minutes to town by hotel shuttle bus, as opposed to the 15 min bus ride from Platis Gialos. I recommend lunch at Kiki’s Taverna (they only do lunch), a pre-dinner drink at Little Venice (Caprice is the obvious pick even if it’s a little too well-known know) and try Kalita for a modern take on Greece for dinner if you’re in town. A trendy/delicious option for dinner is to head to the Belvedere Hotel, which houses a Matsuhisa (Nobu-owned restaurant that is just as good/basically the same, but which is privately owned by Nobu, unlike the Nobu chain) if you’re tiring of saganaki. (Impossible.) Definitely worth a drink and a people-watch. Alternatively, you could just eat a delicious street gyros and save your money for another pair of custom made Greek sandals.

NB: If you can, do spend some time on one of the smaller, quieter, less touristy islands in the Cyclades as well. I love Naoussa in Paros, and Folegandros is delightful. Both are just a short ferry trip from Santorini. 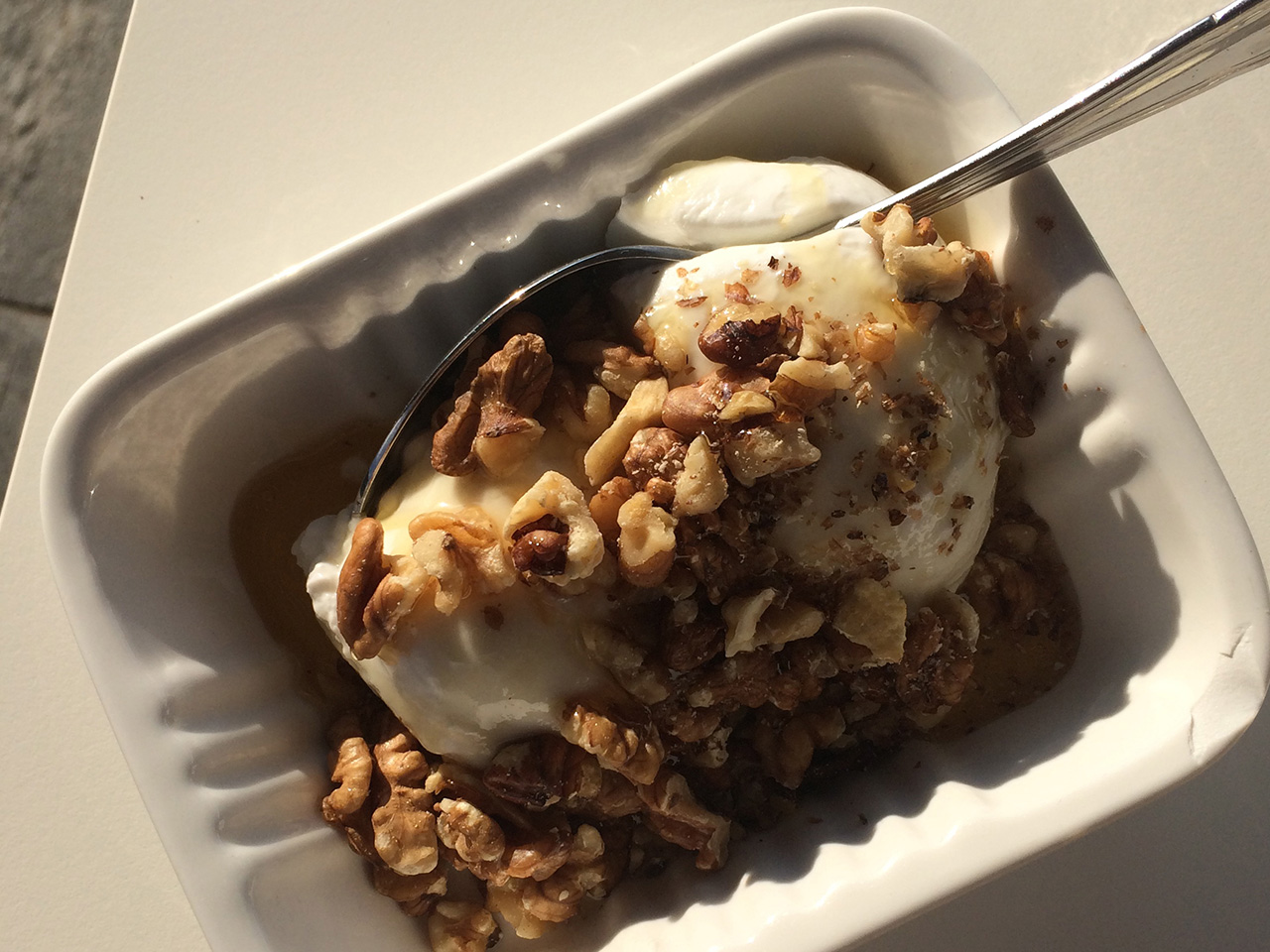 Athens certainly getting a mention

Lots of people will tell you to bypass Athens, but I’ve grown quite fond of it, staying a few days there before or after the islands to acclimatise. I like Glyfada because it has great shopping and is where all of the good bars, restaurants and huge clubs are located. (This was slightly more relevant back in my twenties.) Sadly, the hotel choices around there aren’t the best. They’re a bit tired, and by ‘tired’ I mean ‘fast asleep’. I’ve stayed at the Divani Apollon, but urge you to instead consider nearby Vouliagmeni, which is posh and so pretty and also has a Matsuhisa, as well as the Westin Astir Palace, which is fancy, and smack bang on the Athenian Riviera.

If you want to stay in the city centre and are feeling posh, stay at the Hotel Grand Bretagne, which is iconic and fabulous, in that traditional, Claridges kind of way. The view from its rooftop restaurant and bar of the Acropolis is unreal. Have a drink up there if nothing else. Another good/younger/cheaper option is the St. George Lycabettus, which has a fun rooftop pool/bar/view of the whole city and Acropolis, and you can walk down a pretty path straight into the Kolonaki shopping district, which is great. (I stayed there with girlfriends and it was a cracking spot.)

I bloody love Greece. I know I should visit other places, but the beauty, and the food, and the people just keep zinging me back.

Okay. Enough from me. Take it Greecy you guys.