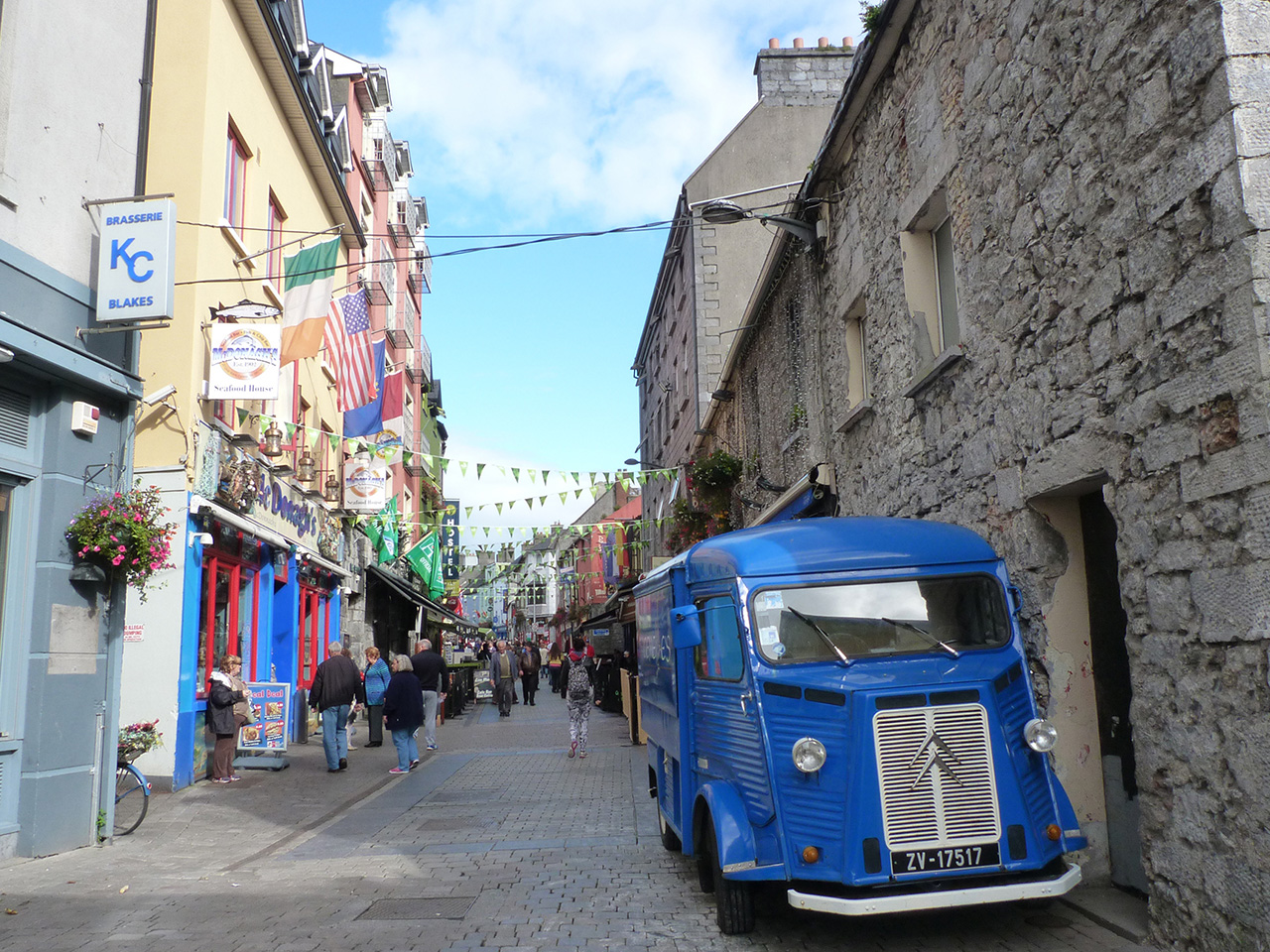 Galway is the gateway to Ireland’s west and the cutest city I visited in Ireland. That’s not to say the others weren’t quaint but Galway has a little something that made me wish I had longer. Galway isn’t just quaint, it’s cool.

I was staying in the uber chic The g Hotel, designed by renown milliner Philip Treacy, aka creator of the bold hat Princess Beatrice wore to the Royal Wedding. Bright bold colours, plenty of spots and stripes, and stunning images of his amazing headwear in each room.

The g Hotel is the only 5-star property in Galway and amid the history and heritage of this town the high-tech, it pops. Have a cocktail in the crimson pink lounge where the psychedelic black and white carpet will make your head spin, have breakfast beside the car hood that’s now a painting of Marilyn Monroe or watch day turn into evening at the main lobby lounge, where you’ll sit under 100 silver balls that reflect the street scene outside.

If you want to get out and explore the city, the hotel is just a 10 minute walk into the heart of Galway. Start at Eyre Square where the streets are pedestrianised and follow your nose past pubs and shops along the cobblestoned streets.

Expedia’s Aussie travellers make the most of Ireland’s warmer months, choosing to travel from July through to September when wandering through the quaint towns and historic villages doesn’t require too many layers of clothing.

As always when I travel, I pick the brains of the hotel concierge on where to go for great music and good food. In Galway there were so many places to try that I my map was covered in circles. With so many pubs offering live music, we went on a mini pub crawl sipping wine (I’m not a huge Guinness fan) and tapping our feet in one place after the other. 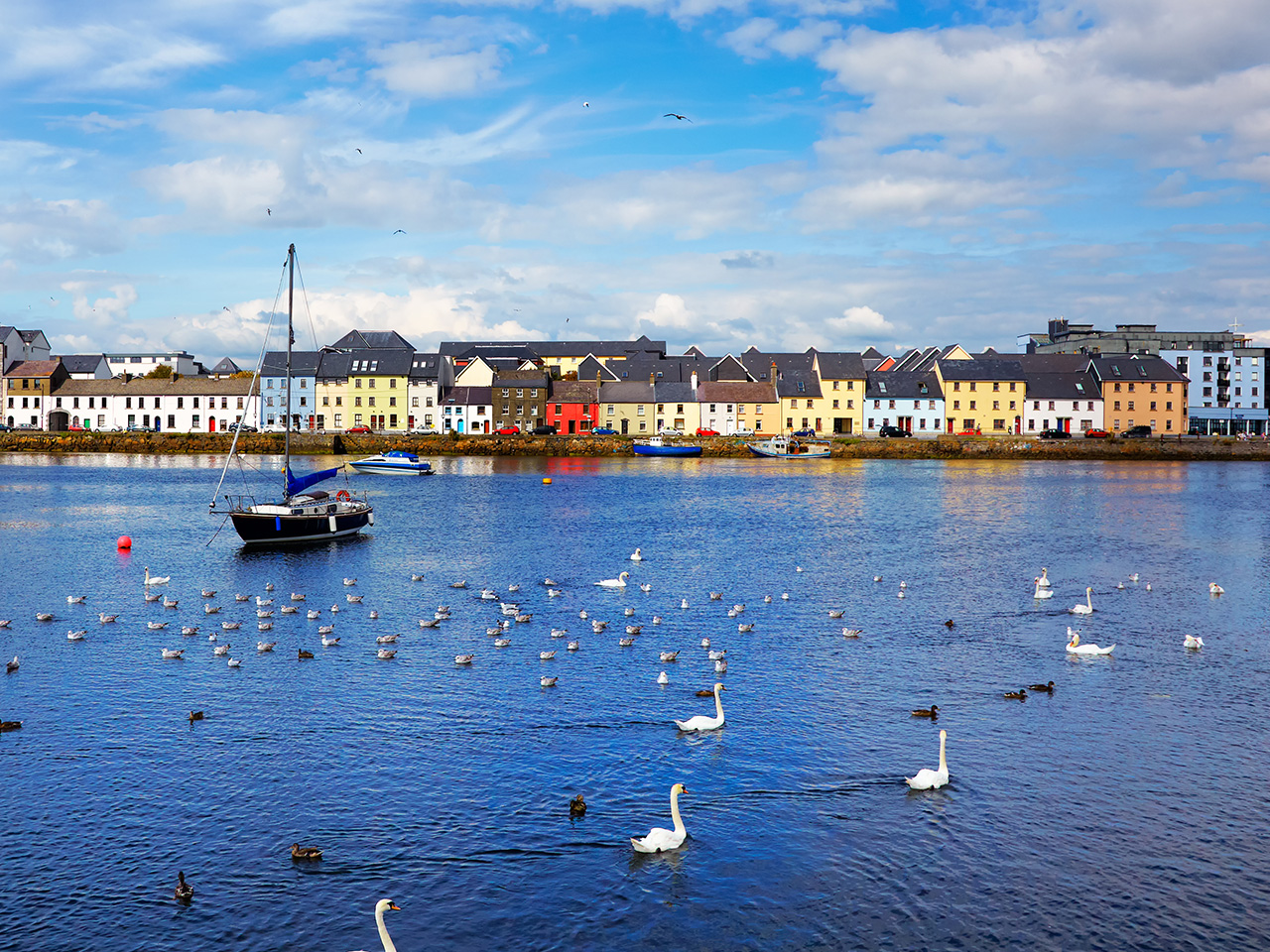 The shopping and cafes could easily distract for a day, but with more time, I’d tootle out to the coast and explore the Cliffs of Moher, only an hour and a half away.

Drive around the winding coastal road of Galway Bay, past ancient stone walls and castles, cottages and rambling paddocks edged in blackberries (which taste great, by the way). Be prepared to stop every few minutes as the picturesque photo opportunities are endless.

On a clear day you’ll see the Aran Islands (if you have time, take a ferry and visit) before rounding a bend to find the mighty Cliffs of Moher rising more than 200m out of the North Atlantic Sea in County Clare. Made famous by the Princess Bride and Harry Potter and the Half Blood Prince, they’re a pilgrimage for tourists who come by bus and car, and the €6 parking fee doubles as your admission into this national park.

On another day head south from Galway to Limerick, where in just under an hour and a half you can visit castles or take in a dog race at Greyhound Stadium. Travel north-west and take the famous Sky Road to Clifden, stopping at whichever pub or quaint village takes your fancy.

After a long day sightseeing a traditional pub dinner hits the spot and back in Galway there’s plenty to choose from. If you’d like to challenge your taste buds, check out the Michelin starred Aniar Restaurant.

Galway is a great hub to base yourself at for at least three days, but even for a week you wouldn’t run out of things to do and places to see.

If I could do it all again I’d do it differently. Four days zooming around the south of Ireland, on a clockwise loop from Dublin with nights in Cork, Limerick, Galway, was a whirlwind of quaintness. Next time I’d take longer and spend more time in one or two cities, especially Galway.

A wee drive around Ireland