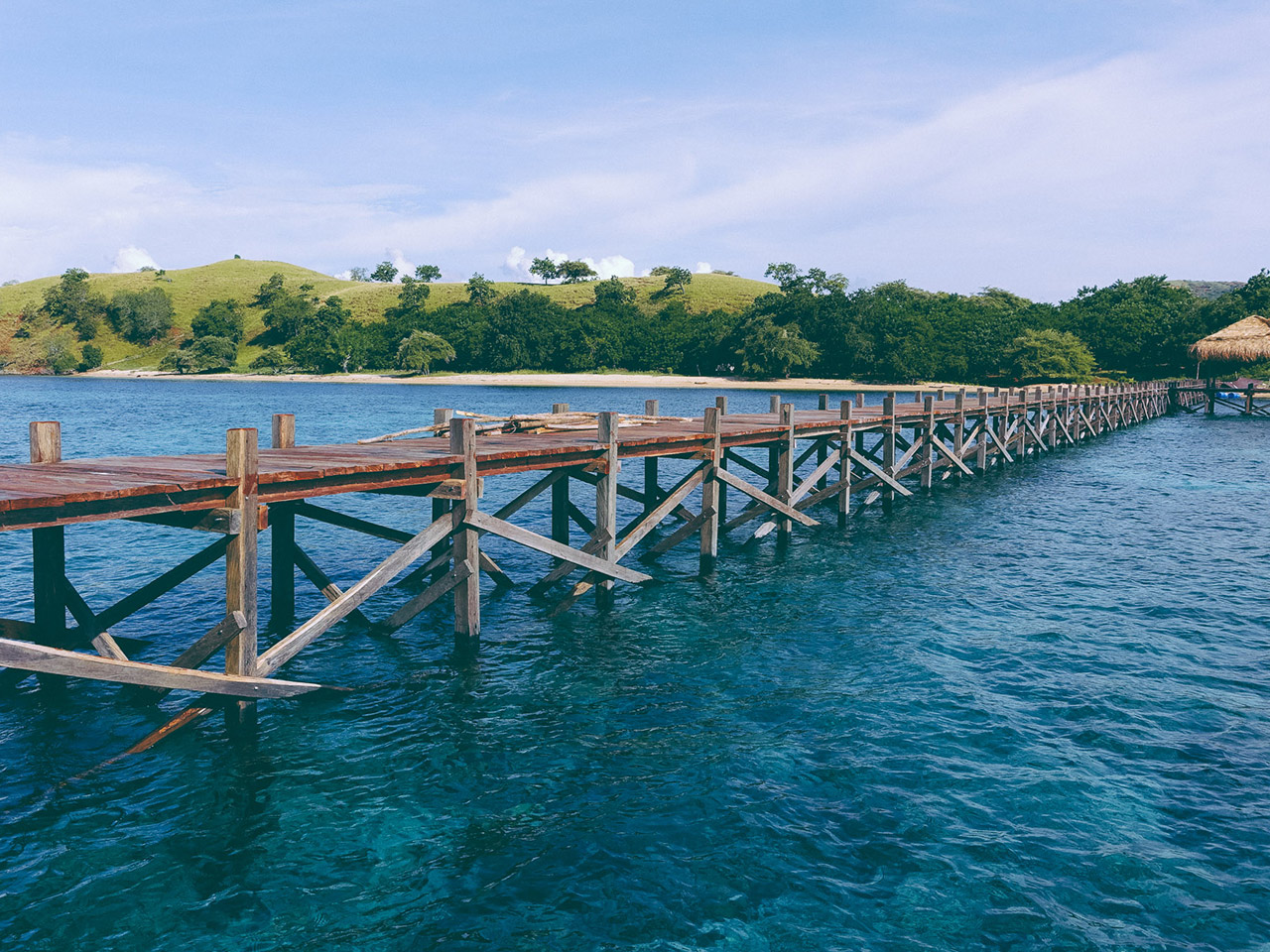 There are close to 1000 permanently inhabited islands to explore in Indonesia yet the vast majority of Australians travel to one, and one only. Bali. I’m constantly amazed when I hear of friends who are content with spending a week in a resort in Seminyak followed by another week in a resort in Nusa Dua, occasionally venturing out to one of the Australian owned Taquerias or Coffee Shops.

I’m not going to pretend I haven’t been one of those Australians in Bali. I’ve had a cocktail at Potato Head and bought $10AUD Gin and Tonics in the early hours of the morning from La Favela, but when a friend invited me to the Island of Flores, a 1.5 hour flight direct from Denpasar, I jumped at the opportunity. I was hoping to experience a more authentic version of Indonesia, one where the food prices were as low as the tourist numbers.

Flying between Indonesian Islands these days is a piece of cake. Garuda is far from the airline it was 10 years ago. Today it boasts a brand new fleet and flies daily on Gurada’s ‘Explore’ sub brand to two cities on Flores; Labuan Bajo, the home of the Komodo Dragon and Ende, famous for Mt Kelimutu, an active volcano with three different coloured lakes. The flight costs around $100AUD each way and provide an amazing aerial view of the island network and Labuan Bajo as you descend (best enjoyed from the right side of the plane).

Labuan Bajo airport is surprisingly modern and although it looks a little unfinished, it suits the city to a tee. A cab trip into town will set you back around 50,000 IDP (roughly $5AUD), with plenty of drivers on hand when you exit the airport. The centre of town is accessible via a single one way road that circumnavigates the town and greets you with a glorious panoramic shot of the port against a backdrop of endless islands. You’ll see locals riding against the traffic but I’d highly recommend against it as the police are often about and have no interest listening to your excuses in English. 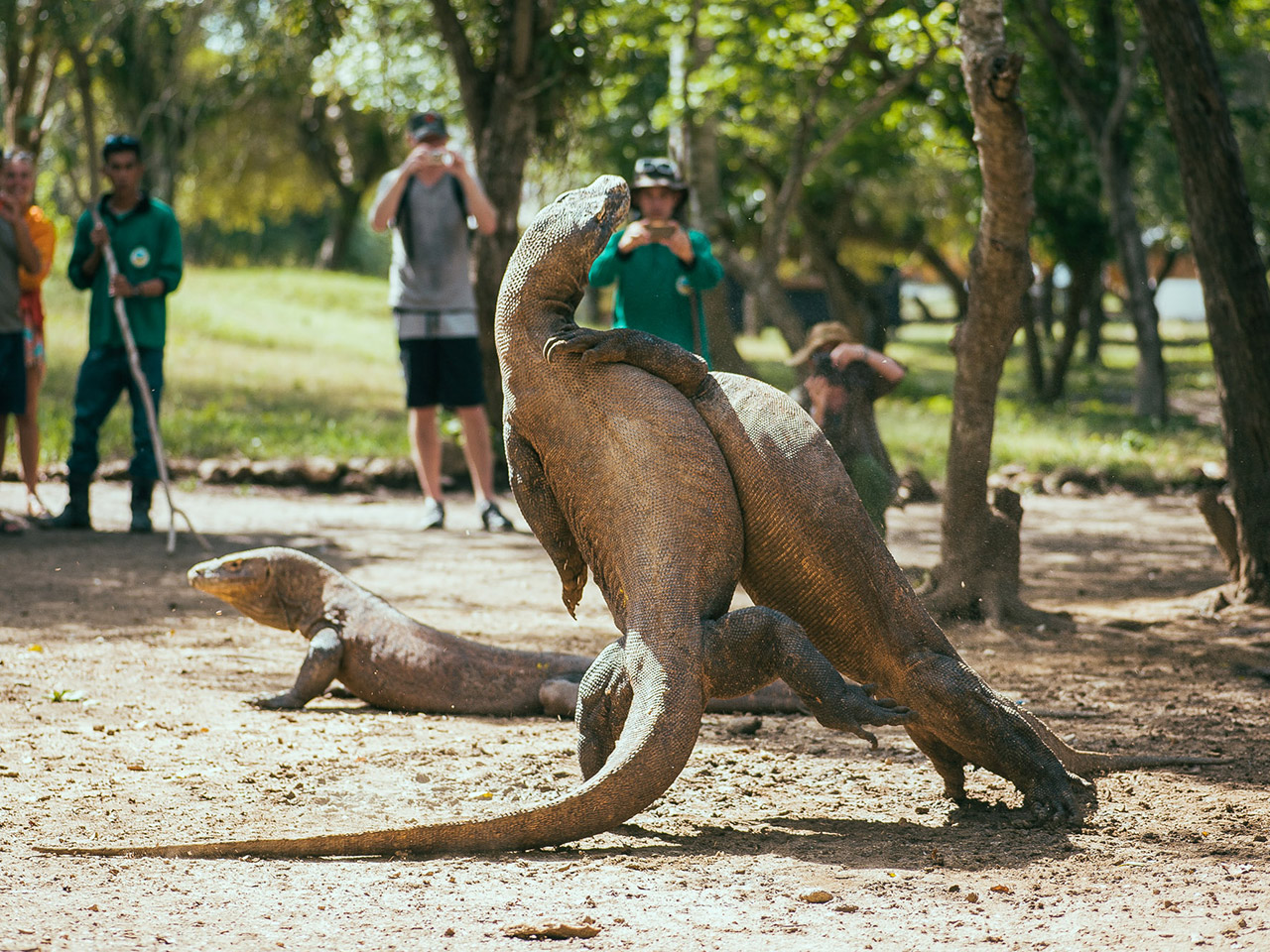 Compared to Bali, the accommodation options in Flores are scarce. There’s a range of options from super cheap roadside dorms to comfortable and contemporary and 4 star luxury. The beachfront Bintang Flores Hotel is just outside Labuan Bajo, with a spectacular swimming pool and modern rooms for just $120AUD a night. Those willing to spend a little more may be enticed by the Plataran Komodo Resort where guests are transferred by boat to traditionally styled luxurious beachfront villas. Keep an eye out for two brand new hotels on the island of Seraya Kecil, a short boat ride from the Labuan Bajo, opening next year.

If, like me, you’re obsessed with eating local cuisine (as hot as possible) for breakfast, lunch and dinner, you can taste the daily catch at the local fish market or sample dishes like Nasi Goreng, Soto Ayam or Beef Rendang from any number of vendors (try Blue Corner) all day for around $2AUD. If you’re keen to really blow the budget, a stroll up the road to Paradise Bar to watch the sunset followed by a meal at Made In Italy is a must. For a grand total of around $50, you can drink plenty of beer while enjoying one of the most beautiful sunsets you’ll ever see, followed by high end Italian food from the best restaurant in town. 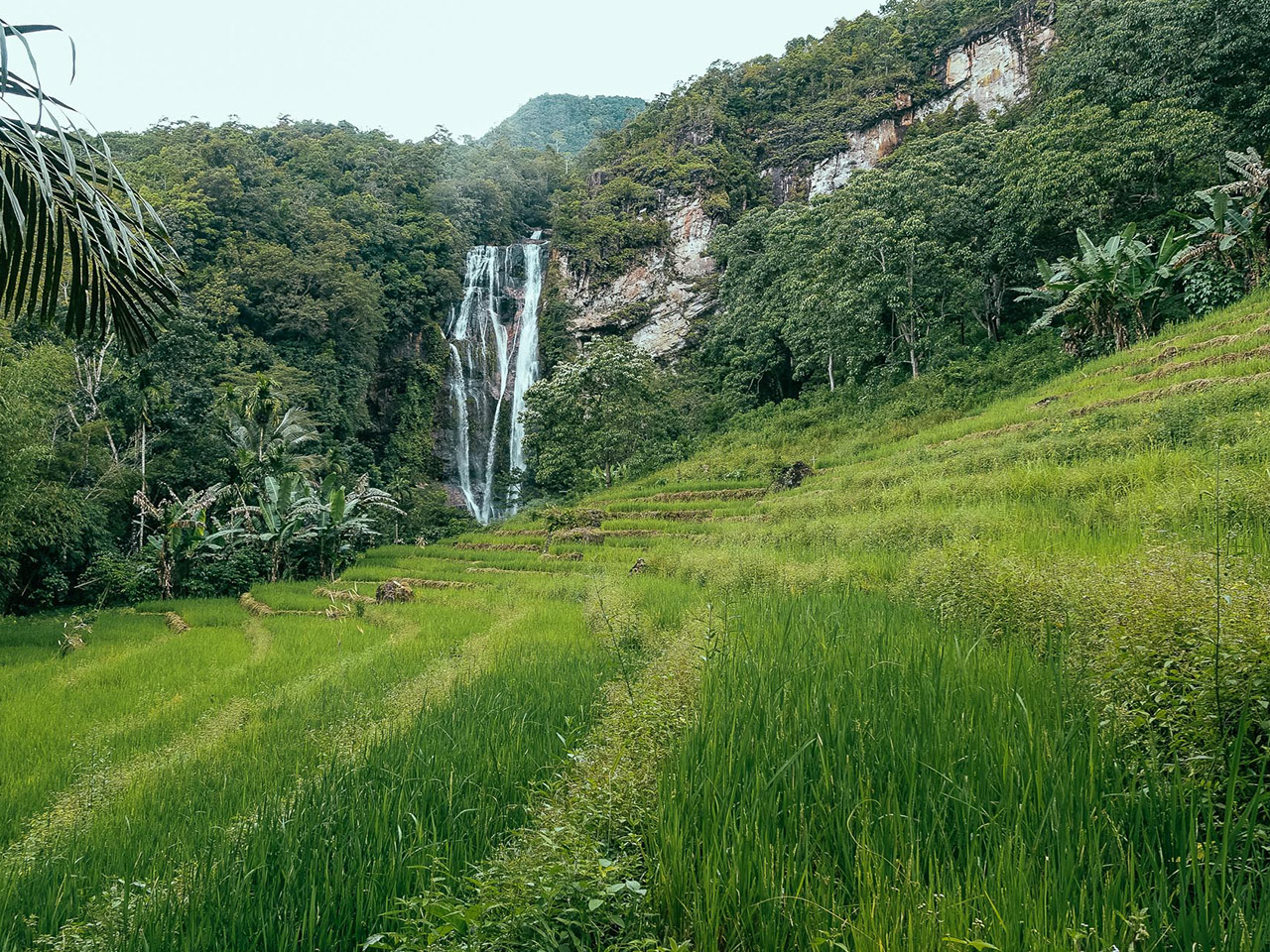 The main reason travellers head to Labuan Bajo is the diving. Whether you’re an accredited diver looking for a 3 day live-a-board tour or a first timer, like myself, keen to give it a try, there’s no shortage of companies to choose from. We enrolled in a one day ‘Discover Scuba Diving’ experience – 2 dives in different locations, lunch and a tour of Komodo National Park.

The dive element allows beginners to descend to 12 metres following a series of breathing exercises monitored by instructors. On our group’s second dive we were lucky enough to witness a group of huge Manta Rays, the largest group our instructor had seen in eight months diving in the area.

When we docked at Komodo National Park we had no idea we were about to out do our Manta encounter. Komodo National Park is home to roughly 5,700 ‘Komodo Dragons’ and is the only place in the world to see the giant lizard, aptly named due to their aggressive nature and reptilian appearance.

According to our guide Ramli, sightings mid-trek are rare so it was rather terrifying when, minutes into our trek, we came face to face with a giant Komodo Dragon and its razor sharp claws, striding down the path towards us. Suspense and fear were our first reactions as the group huddled but Ramli was in control, or so he said, guiding the three metre dinosaur back into the bushes with a pencil thin stick.

Hearts beating a little faster, we climbed to a wonderful lookout and composed ourselves while we took photos. Moments later we heard a loud hiss, then another and Ramli began to get excited and told us to run after him as we were going to witness something very special – two huge male Komodo Dragons fighting each other. When we climbed back onto the boat the group was in complete awe of what we’d just witnessed but also conscious of the hairy situation that may have unfolded knowing the nearest hospital was a two hour boat and chopper ride away.

A visit to Komodo Island is a great day trip – there are also some great two and three day tours available from Bali. 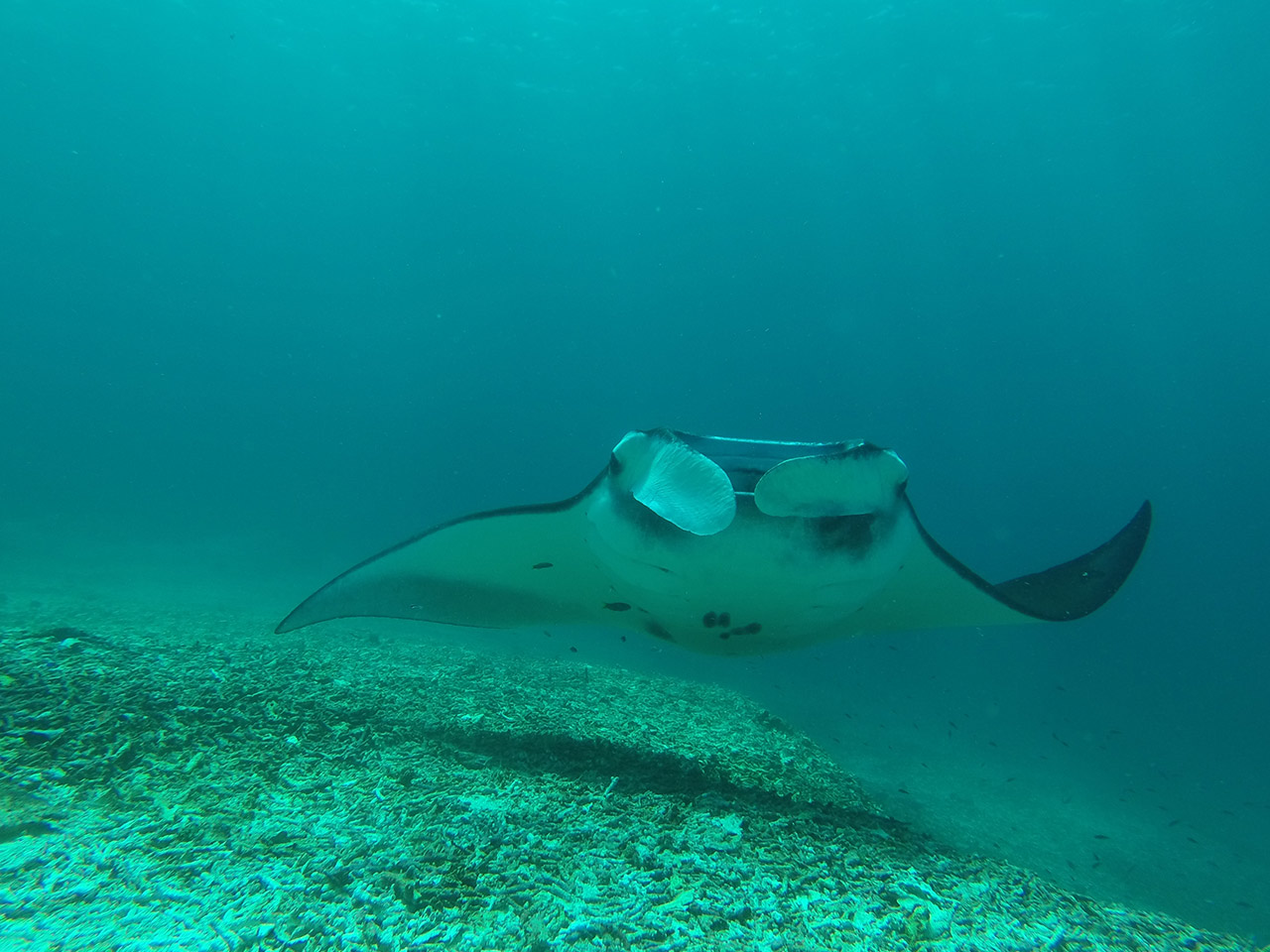 With one day left in Labuan Bajo, we rented scooters for $7AUD and headed for the mountains in the pouring rain in search of Roe Village before a 1.5 hour hike to the Cunca Rami Waterfall. For the first time, in as long as I can recall, I felt like I was truly ‘off the beaten track’, trudging through rice patties with a bare footed local villager and her 6 year old daughter, listening to the thundering waterfall in the distance. The ride there and back is a great opportunity to take in the unspoiled sights of Indonesia and the trek down to the waterfall is both challenging and rewarding.

To me a memorable travel experience must leave me feeling accomplished in some way. I love relaxing by a pool and drinking Pina Coladas but I think it’s important to strike a balance between indulgence and an authentic experience – the unexpected adventures always make for better stories and Flores certainly delivers!