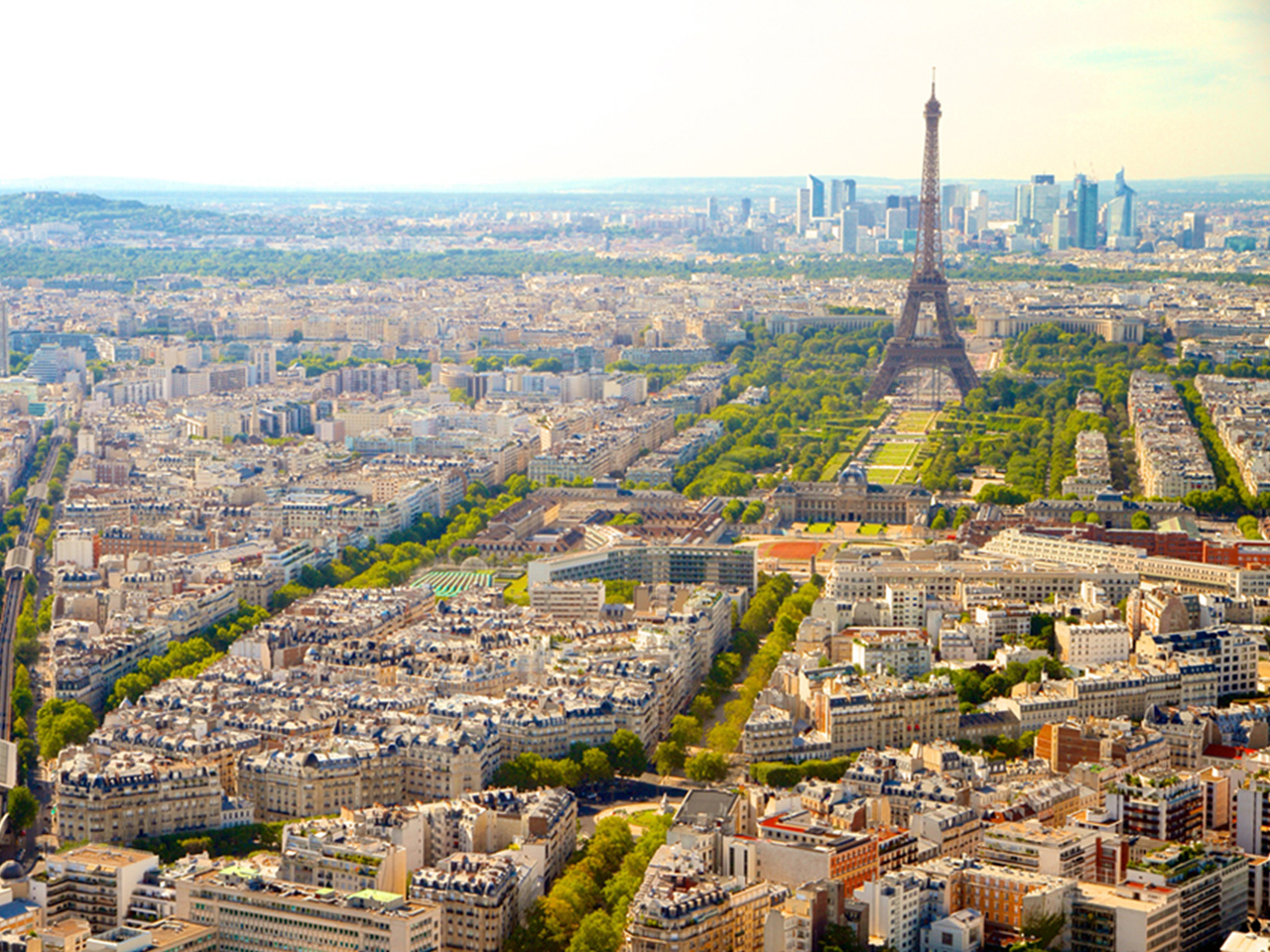 There’s something about Europe that’s just hard to describe—a mysterious pull for travellers all over the world. The French would say it’s a certain je ne sais quoi, but we can venture a guess as to why Europe’s cities are so beloved—they’re filled with history and culture, yet always at the forefront of trends. They have some of the world’s most amazing food (hello, Italy). Above all, they are stunningly beautiful.

So where will you go next? Let our guide to Europe’s coolest cities inspire you.

London has been one of Europe’s hippest cities for nearly two millennia. Experience that history and tradition as you tour the Tower of London—home of the Crown Jewels—and watch the changing of the guard at Buckingham Palace. Return to the present with a breathtaking ride on the London Eye as the city stretches out before you, 135 metres below.

Can you see East London? It’s a must-visit if you’re looking for the stylish crowd. Party into the night at The Star of Bethnal Green, then grab some late-night eats from the 24-hour Beigel Bake. More of a morning person? Take a walk along Regent’s Canal. Start with a cuppa at the floating Waterside Cafe in Little Venice, and end at Camden Market, where you can check out vintage shops like A Dandy in Aspic and St. Cyr Vintage.

The City of Lights has been lighting the way for the rest of the world since the Lost Generation penned some famous quotes about it nearly 100 years ago. Paris is indeed a “moveable feast”, and your memories of strolling the Champs-Élysées, admiring famous artworks at the Louvre, and gazing up at the Eiffel Tower will stay with you forever.

While Paris has been known as a world capital of fashion, cuisine, and culture for centuries, it still has a few secrets to discover. The northern neighbourhood of Canal Saint-Martin is the perfect place for under-the-radar art. First, nosh on gnocci or soupe du jour at bohemian restaurant Le Valmy, then visit Nathalie Fiks Gallery to see what’s new in the Paris art scene. Stick around for a show at Bizz’Art, an epicentre of local soul, jazz, and world music performers.

To talk about culture without mentioning Rome is crazy. The Vatican houses treasures like the Sistine Chapel and the famous frescoes of the four Raphael Rooms. The Colosseum has more history than you can fit in a textbook, and the Spanish Steps are just plain gorgeous. There are plenty of ways to enjoy the present here, too—you are in Italy, after all.

One of those ways is food, which means it’s time for a battle of the pizza bianca. Have a bite at Antico Forno Marco Roscioli, then walk down the block to Forno Campo de’ Fiori for another sample. Let your taste buds choose the winner, then get some exercise. Climb the hill behind Basilica of Santa Sabina to reach the Garden of Oranges, and you’ll find some of Rome’s sweetest city views.

There’s a reason that Spain is known for siestas—this is a country that knows how to relax. From floating around on paddleboats in Retiro Park to watching the portrait artists in Plaza Mayor, Madrid especially seems to run on its own schedule. Even the rolling lawns of the Royal Palace Gardens seem to beckon you for a nap. And nap you can, especially after a midday sangria or two.

Adventurous travellers can brave the crowds and head to the cocktail stand at the massive Mercado de San Miguel, then sip sangria and browse wine, pastries, and fresh produce. Prefer some history with your drinks? The world’s oldest restaurant, Restaurante Botín, also just happens to serve some delicious beverages. For more art (and less wine), check out some of Madrid’s lesser-known museums, like the Real Academia de Bellas Artes, which has one of the world’s best Goya collections.

Portugal may be Spain’s neighbour, but its capital has a whole different vibe. Lisbon might not come to mind when you consider a European getaway, and that’s precisely what makes it so chic. This laid-back city on a bay has all the historical landmarks, like Jerónimos Monastery and Belem Tower, with none of the pretence. It also has low-key museums, scenic strolls, and ginjinha, a sour cherry liqueur that may change your life.

Here’s just one example: The Berardo Collection Museum showcases all the trendiest art movements, from surrealism to pop art—and it has a Picasso. For architecture, just walk across the 25 de Abril Bridge to the Christ the Redeemer statue, which is even bigger than Brazil’s. End your day sipping ginjinha with the locals at A Ginjinha.

Brussels may be small compared to other European capitals, but its amazing architecture can rival any place on earth. Go stand in the middle of the Grand-Place, one of the most intricately designed squares in Europe, and you’ll see what we mean. And don’t forget to visit the Cathedral of St. Michael and St. Gudula and the triumphal arch in the Parc du Cinquantenaire.

You deserve a reward after all that sightseeing, don’t you think? Luckily, Brussels is renowned for both its beer and chocolate—and we think that makes it pretty awesome. Satisfy your sweet tooth with luxurious chocolate truffles at Frédéric Blondeel, and pick up some starfish-shaped pralines as a classic Belgian souvenir for your friends back home. Next, head to the lively Ixelles neighbourhood, where beer lovers could spend a whole day sampling the libations at Moeder Lambic.

Incredible Mediterranean food with a Spanish influence. Surreal, Gaudi-designed buildings that people come from all over the world to see. Great weather, and a great football team. Barcelona takes all the things that make a fantastic holiday and wraps them up into one amazing place. Get started at the soaring spires of La Sagrada Família and the dragon-like Casa Batlló, two of the most famous Gaudi masterpieces, then visit the Gothic Quarter, which is chockablock with history.

When you’re feeling peckish, it’s time for tapas. Near Sagrada Família, you can head to Restaurant Tossa for the best croquetas in the city. Or, check out the Poble-Sec neighbourhood, where you’ll find cutting-edge gastronomy at Quimet & Quimet and funky independent theatres and museums. The glistening white Joan Miró Foundation is practically a spiritual experience for fans of the renowned Spanish artist.

No city combines new and old, classic and contemporary, quite like Edinburgh. The imposing Edinburgh Castle looks down upon the city like a watchful soldier, while the Royal Botanic Garden is one of the world’s finest. This city makes waves in the present day, too. Visit the National Museum of Scotland to see its display of Dolly the Sheep, the first cloned mammal in the world.

Edinburgh is especially known for its quirky side, and nowhere is this more evident than the literary scene, both past and present. It was the first City of Literature recognised by UNESCO, and you’ll find an important literary landmark on practically every corner. Visit the Elephant House and nearby Spoon Cafe to live like J.K. Rowling, or emulate Robert Louis Stevenson with an afternoon on the Cowgate spent dining and socialising. And any literature lover will get lost for hours at the Writers’ Museum and Makars’ Court on the Royal Mile.

Vienna is practically synonymous with elegance. Beethoven and Mozart created some of their best work here, and the Vienna State Opera produces world-class stars. Hofburg Palace is a testament to opulence, and St. Stephen’s Cathedral is a Gothic masterpiece. Yes, Vienna is a class act—but it also has a modern twist.

Today’s music scene goes way beyond classical. Club Flex is located in a tunnel under the Danube—how cool is that? There’s also Arena, on the east side of town: it’s an edgy graffiti-covered building complex housing indoor and outdoor stages for all types of music. For your modern art fix, head to MuseumsQuartier for Andy Warhol at mumok and Art Nouveau at the Leopold Museum. Get inspired, then browse the galleries on Schleifmühlgasse to take home a souvenir.

We saved the best for last. Amsterdam is known around the world as a diverse, progressive city with plenty of culture. Get a feel for the atmosphere in Vondelpark, the city’s largest, or the hustle and bustle of Dam Square, where you’ll also find sightseeing stops like the Royal Palace and the National Monument. Top off your cultural education with a visit to the expansive and well-loved Rijksmuseum.

How will you get to all these places? Join the cycle craze and go on two wheels. Bike City has rentals in the picturesque Jordaan neighbourhood, or cruise the Flower Strip with Rent-a-Bike Van Doorn.

The coolest part of Amsterdam, though, it its alternative flair. Take the ferry to Noord and relax at a waterside hangout like Café de Ceuvel. Shop artisanal-everything in 9 Streets, then check out the street art in the 200 block of Spuistraat. With renovations quickly taking over, it might be gone soon!

Previous post The 10 Most Scenic Destinations in the World