Eating in Italy with food intolerances 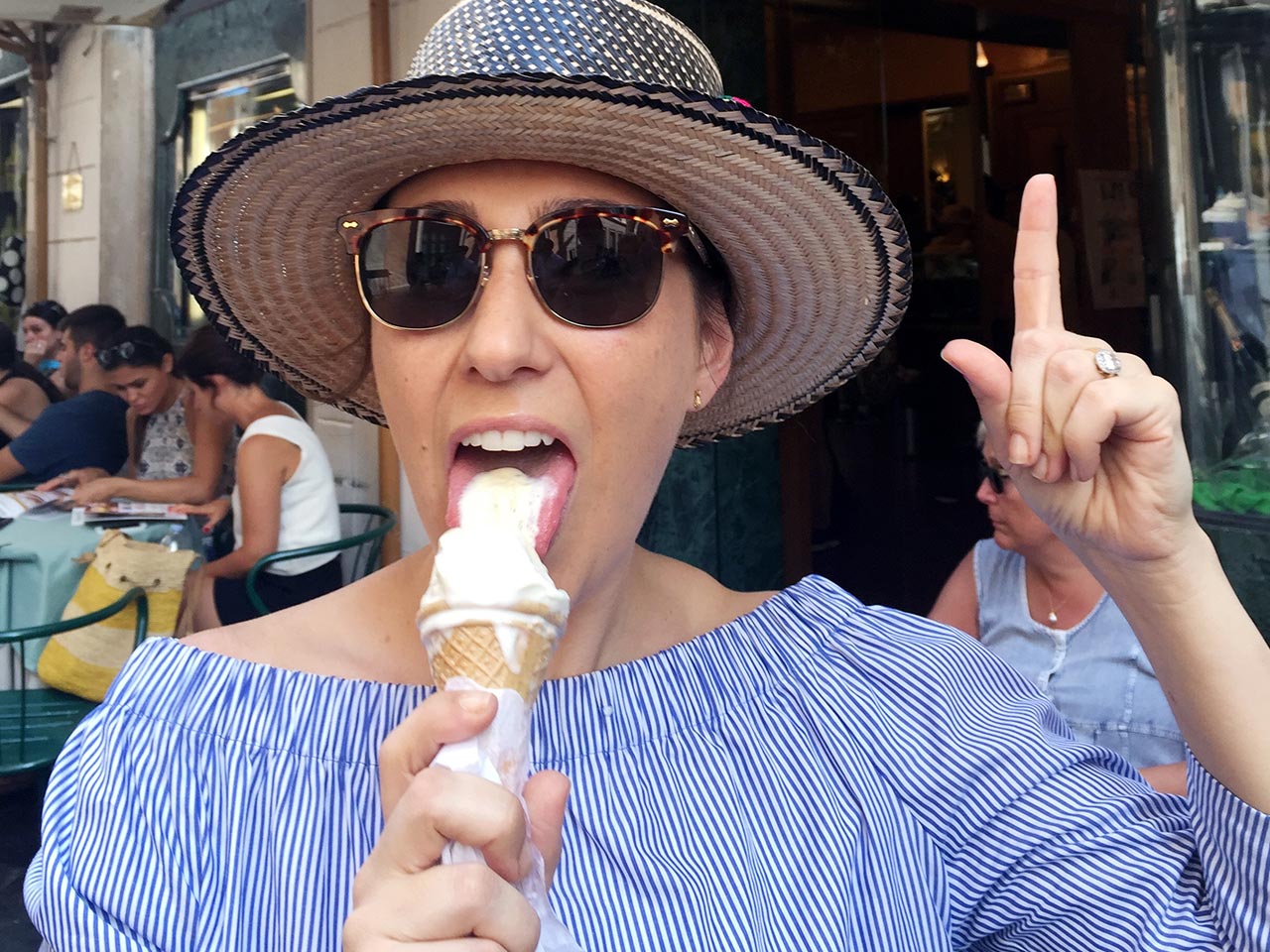 Despite my earlier post detailing the finest pizzas and gelato and cheesecakes in Florence, I must confess those magnificent meals were not indicative of my daily diet. They were naughty, delicious pit stops on a food journey through Italy that was primarily – gasp! – lactose, wheat, gluten and fructose free, and where possible, low in FODMAPs.

Oh no no no, it’s not for any special reason, I just like to make life hard for myself! No: since the start of the year I’ve been sorting out some longstanding gut issues, (I thank Gut, the brilliant book by Giulia Enders for finally urging me to do so; also recommend Brain Maker by David Perlmutter, he of Grain Brain fame) and my gut guy (technical title) recommended I go on the low FODMAP diet to fix them.

At first I was miserable, and confused, hungry and extremely hangry, and then, after time, I figured out what I could eat, and what upset my tum, and how to cook without onion and garlic, and now it’s just a way of life. (Except that it isn’t, because it’s not a forever-diet, it’s a highly restrictive, temporary diet while your gut heals and then you begin re-introducing the problem foods back in. But you know what I mean.)

I feel much better for it, and so armed with a slew of supplements (oregano oil, Bactrex, digestive enzymes… sing if you know the words) I headed to the land of wheat, cheese and fruit.

But here’s what I discovered. You can still eat well and not feel like you are missing out in Italy, even if you have malabsorption issues, or intolerances, are vegan, or have full-blown allergies. The Italians are incredibly progressive in this area, in fact; no one blinks when you make a special request. Except for that one time I asked for Nutella on my omelette.

I’m not sick, it’s a dietary preference, and I am the furthest thing from an expert on this, but here’s what I learned:

Gluten free will set you free.

I was stunned, in a really cute, greedy, oh-man-I-can-still-eat-spaghetti-every-night, way, at how many restaurants offered gluten free pizza and pasta options. That’s because despite being a nation whose two main food groups are pizza and pasta, the Italians understand that not every body (literally) can process gluten, so they offer (really, really good, non stodgy) GF alternatives. (Side note: Low FODMAP doesn’t mean GF, but it’s fairly common to skip the gluten as well as the Oligosaccharide-containing wheat/barley etc in the low FODMAP plan.) Celiacs even receive gluten-free food vouchers of up to 150 euro per month! Incredible. I was easily able to find gluten free snacks, crackers and cereals to snack on everywhere, even in tiny minimarkets, and it wasn’t relegated to a special section: it was just there, with all the other stuff, almost as if it was… real food. And while pizza and pasta dominate menus, there are plenty of GF options like bresaola, caprese, parmesan pasta, (aged cheese and buffalo are low FODMAP/low in lactose), seafood, chicken, fish, etc etc 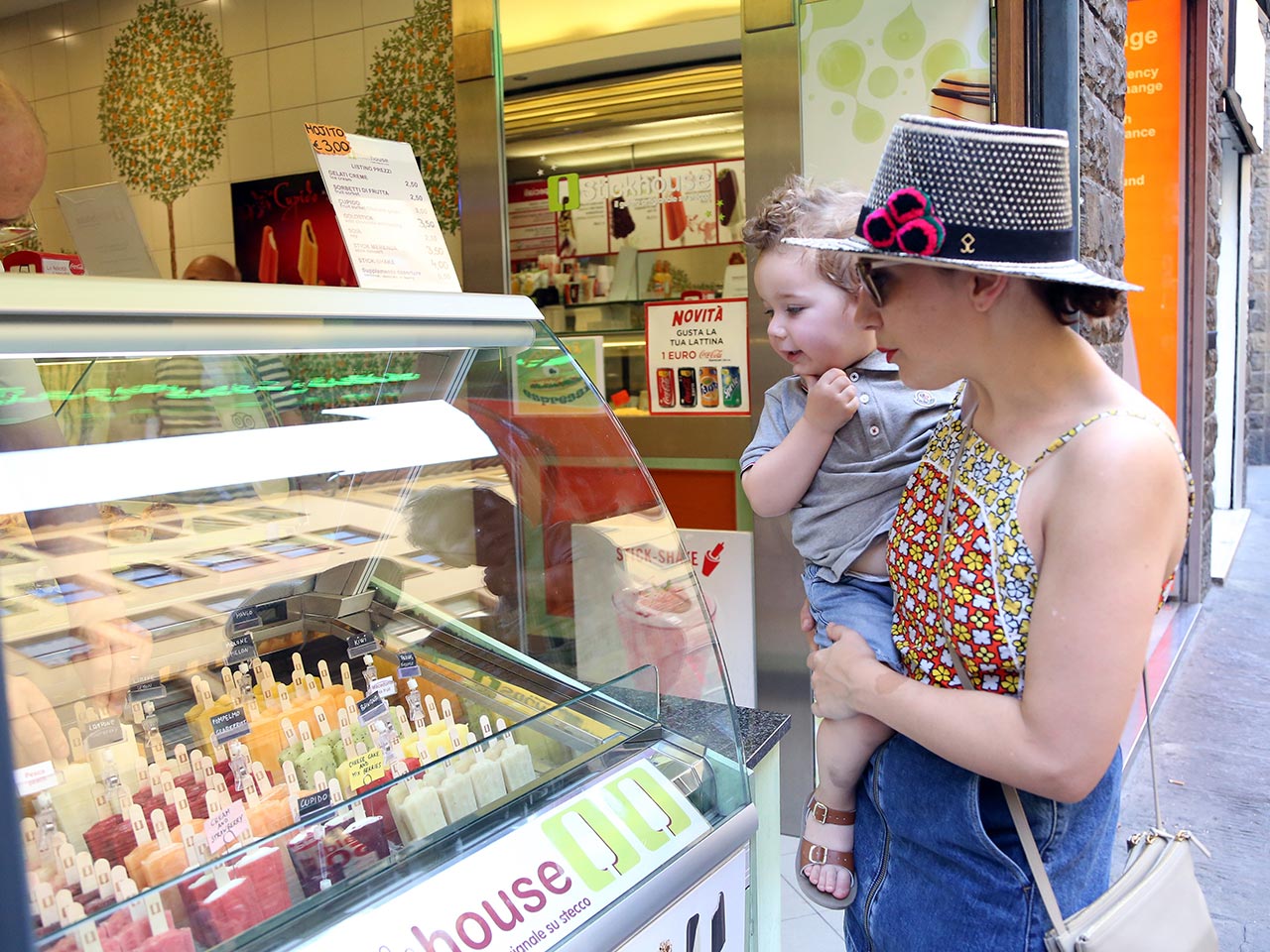 Legislation in Italy means that each dish, on every menu, must have all allergens listed. It’s done numerically, and then at the end of the menu, you cross reference the numbers on your dish, with the allergens list (eg: soy, milk, egg, gluten, nuts, etc) so you know what you can and can’t have. I assume this is for serious, life-threatening allergies, but is also helpful for those trying to avoid an angry tumtum. Waitstaff are educated and understanding, and you’ll always find something to eat, even if it’s a corner of the tablecloth.

When I was told I was to avoid garlic and onion (fructose), half of my taste buds skipped town in protest. After all, I’d grown up in a family where they formed the foundation of almost every dish. And subsequently, I used them as my key taste-building blocks. Especially in Italian dishes. But when I got to Italy, I realised that while onions and garlic are widely used in Italian cuisine, there are PLENTY of popular and delicious options (pesto, carbonara, cheese and pepper etc) without them. Especially if you go for salads, fish, meat etc. 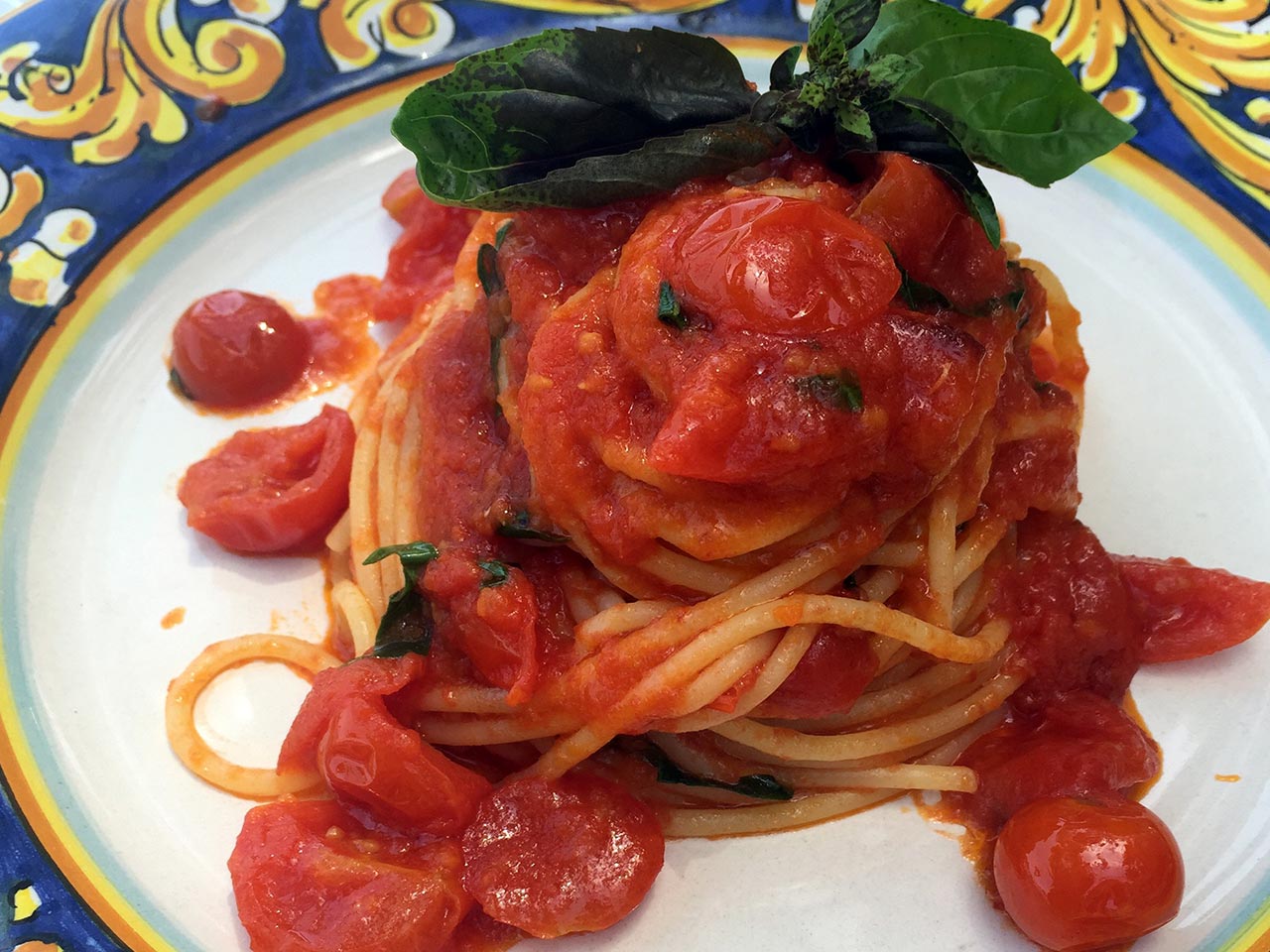 You still get to enjoy dessert: senza latte

With the exception of the French, the Italians are probably the best at dairy in the world. So it sucks to not have at it when you’re there. Or, in my case, mostly not have it, because when the best cheesecake or gelato is on offer, I will totally cop that stomachache. BUT! Thankfully, Italians understand that a lot of people aren’t that great at digesting and tolerating lactose, or just don’t want it, so they provide plenty of dairy/lactose free options too. Almost all gelato joints sell dairy-free sorbets, but we saw plenty of dairy/ lactose-free gelato (generally made with soy) (…or with no milk at all – senza latte – like pure chocolate gelato, phwoaar) as well. I even saw a few doing the coconut ice cream thing, which was thrilling, as I basically live on coconut ‘dairy’ back here, but Italy is not quite as into the Paleo fad as urban Melbourne. (Grom and Punto Gelato in Rome are renown for their allergy-free treats; Punto has GF cones and DF gelato!) 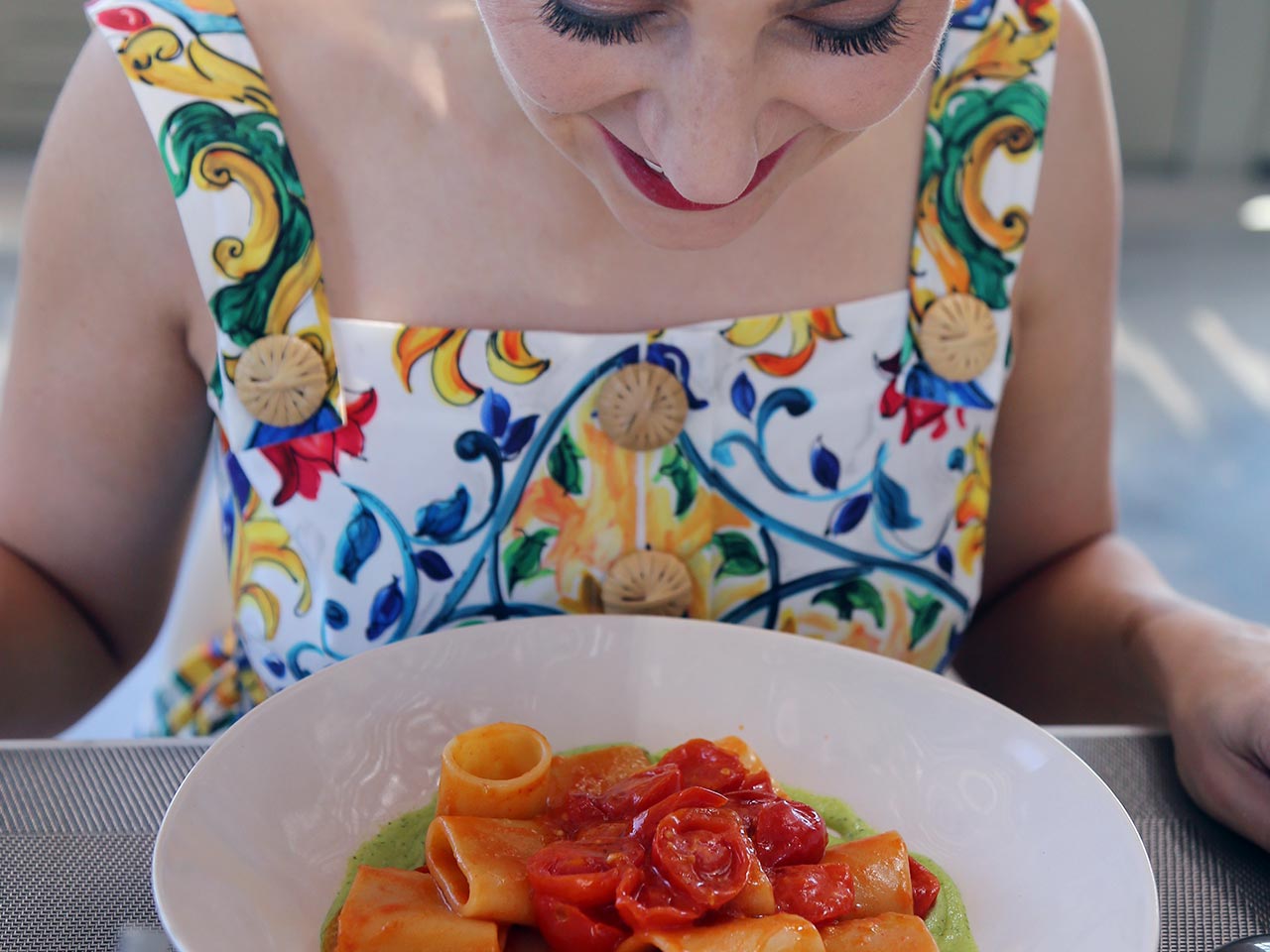 I feel compelled to say that even when I did eat wheat or ice cream or fruity-sugary cocktails (because: holiday) I did not get anywhere near the bloating or stomach upset as I do back home. And when I was “living” in Italy a few years back, same thing: I had these gut issues back then, but remember feeling light and healthy despite the daily cycle of pasta/wine/gelato/espresso. Putting on my guessy quack doctor visor for a moment, I reckon the reason might sit somewhere in here:

I denied myself very little, and ate tremendously well, even with my low FODMAP preferences, confirming, as I suspected, that even when mildly handicapped, Italy still wins at food.

Next post 6 Awesome Ways to Hang Out on Sydney Harbour

Zoë Foster Blake is the kind of traveller who pays attention to the toiletries in hotels, but don't judge her on that. Judge her on the ridiculous size of her suitcase, instead. Zoë is the founder of the clean, cute skin care line, Go-To, the creator of Break-Up Boss, the author of nine books, and a mother of two. She has been to the Greek Islands far too many times, arrogantly dishes out unsolicited hotel recommendations, and can change a nappy in a plane toilet one-handed in under 60 seconds. She spreads her time between Melbourne, Sydney and Queenstown. Lucky pig!