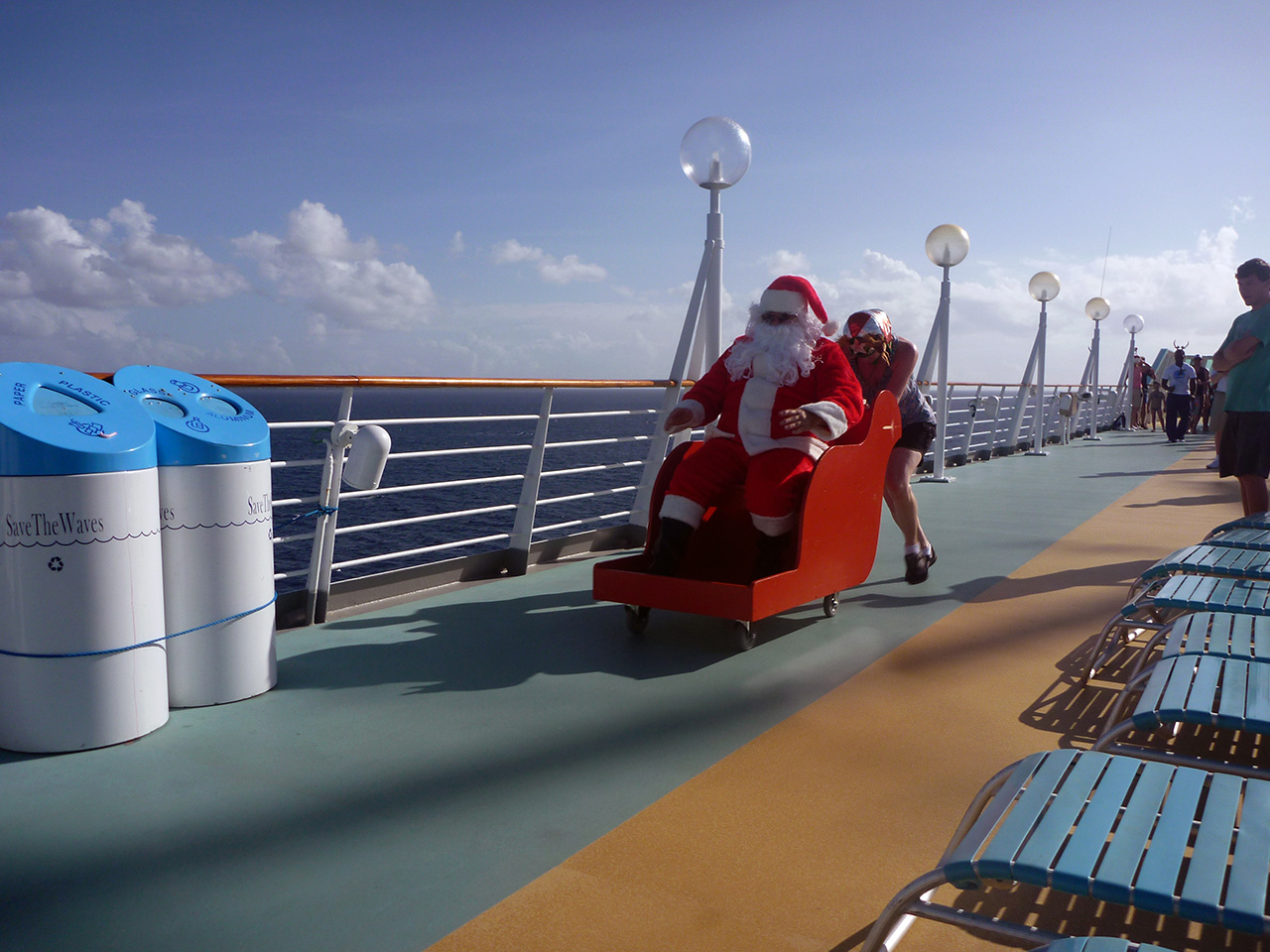 Christmas is coming. It’s that time of year again, when you toss the coin about whose turn it is to host the big breakfast, lunch, or dinner. You start making a list, and checking it twice; drinks, nibbles, turkeys, hams, seafood and desserts. Are you making a pudding? If you haven’t started, get cracking.

A few years ago my family decided to take a different approach. We left behind the baking and the bustle, foregoing the hassle of having to commute between family gatherings by arriving at Circular Quay on the 22nd Dec, our bags stuffed with presents and swimming costumes.

A Christmas Cruise is one great way to getaway for the holidays. Most of the large ships down under will do a loop out to the South Pacific and back. This year the Pacific Jewel, Pacific Pearl, Ocean Princess, Carnival Spirit, Celebrity Solstice, Rhapsody of the Seas and Voyager of the Seas, Radiance of the Seas, Pacific Dawn and the Holland America Oosterdam will leave Australian ports a few days before Christmas, returning around Boxing Day, before heading out again on New Year’s Eve cruises. For more details on itineraries and ships, check out Expedia’s South Pacific December Cruises.

On our South Pacific Christmas Cruise, we travelled with three generations, from a seven year old waiting for Santa, teenagers hanging out for the teen club, singles who secretly wanted to sing carols, parents desperate for peace and quiet, and grandparents looking to leave the stress behind. The good news is, aboard a major cruise ship, there’s something for everyone. And over Christmas, the crew goes all out to make sure everyone is happy. After all it’s their Christmas too.

As a family we filled the multi-storey atrium and sang Carols on Christmas Eve, frolicked under fake snow as it fell from the ceiling (big and little kids), the little ones decorated gingerbread houses while the teens tried to find the mistletoe. There was Christmas craft, trivia, movies and shows. 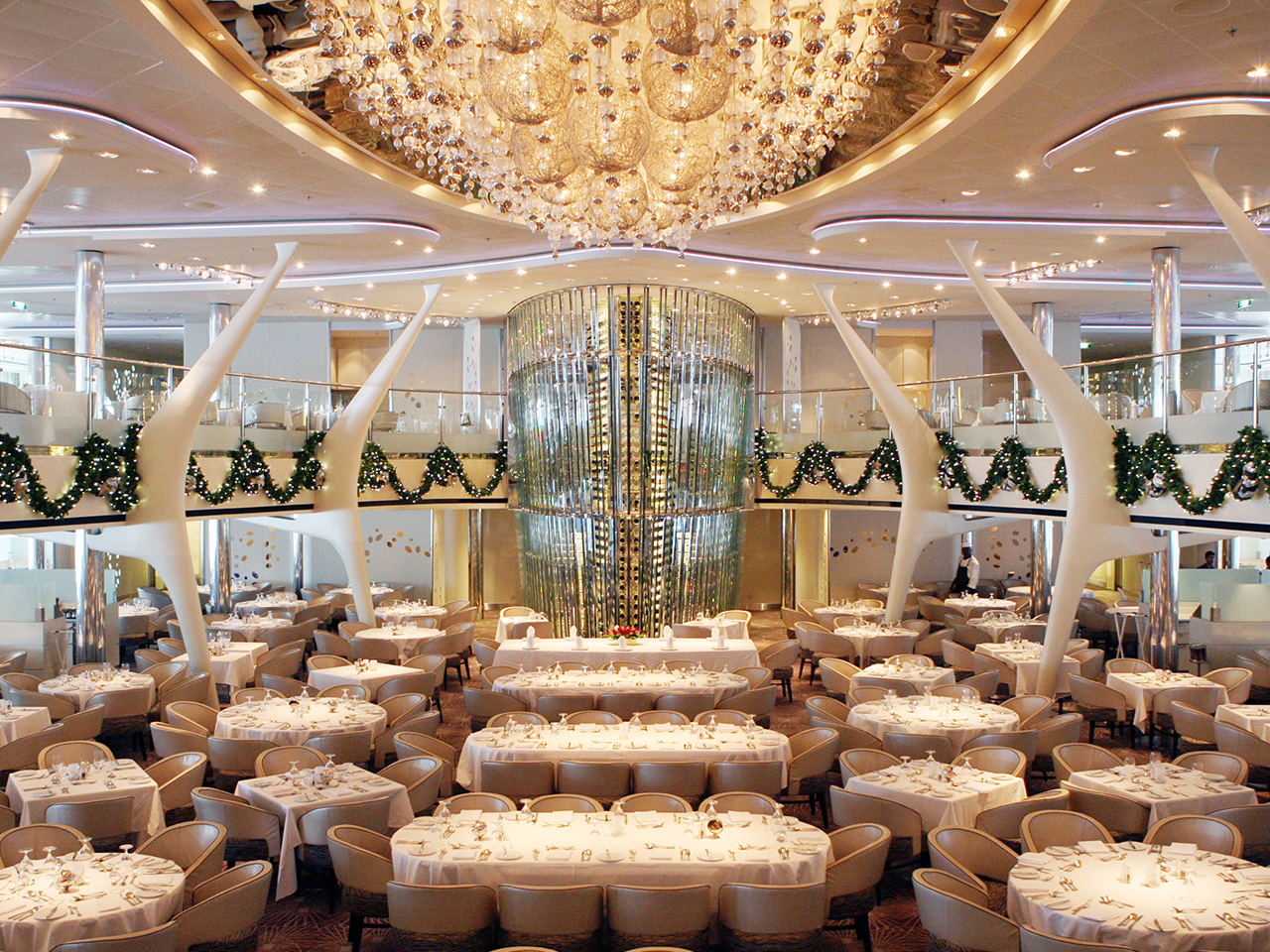 According to Cruise Director Luke Aerosmith, who will spend Christmas aboard the Voyager of the Seas, the crew prepare weeks in advance. They’ll wrap around 1200 presents for the kids on board, rehearse a matinee show, install a 40ft Christmas tree and hold a midnight mass.

As it’s the school holidays, you will find high numbers of kids on board. Santa will be there too – he comes down via the smoke stack before climbing out of a life raft. It’s all a bit of fun. Even without the Christmas festivities, there’s ice skating, rock climbing, basketball, shuffleboard, movies and more for entertainment.

On Christmas morning we wake up early and tackle the pile of presents in the corner. It’s cosy when we’re all crammed into one cabin, and the gifts might be a little smaller this year (parents had to have some room for clothes in their bags) but once we’ve opened our goodies, we head upstairs to the buffet. Ham, eggs, bacon, pancakes, waffles, fresh fruit – everything you might have on Christmas morning, without one of us being in the kitchen. By 10am we’re back in our swimmers and by the pool. Carols are playing on the loudspeakers, staff are wearing Santa hats, and we’ve got nothing to do but relax.

There’s one moment when my aunt and I, the self-designated Christmas chefs, look at each other feeling a little lost. No turkey to stuff, no salads to chop, no pudding to put on the boil. Instead we read books and go for a swim, play games with Santa and the kids.

In our family Christmas lunch is the main meal but on board the American ships it’s all about dinner. Waiting around for dinner is bit different, especially when there’s no preparation work involved. In the dining room Christmas crackers are on the table so we don paper crowns and share jokes. Turkey with all the trimmings is on the menu, but there’s steak and seafood too. The pudding might not be as spectacular as the family recipe but hey, we haven’t had to watch it boil for five hours either.

After a long, relaxing day, we head to a bar for a night cap while the kids run off to watch Home Alone on the big screen. There’s no fighting or a pile of dishes to tackle. Christmas at sea seems to have grown on me.