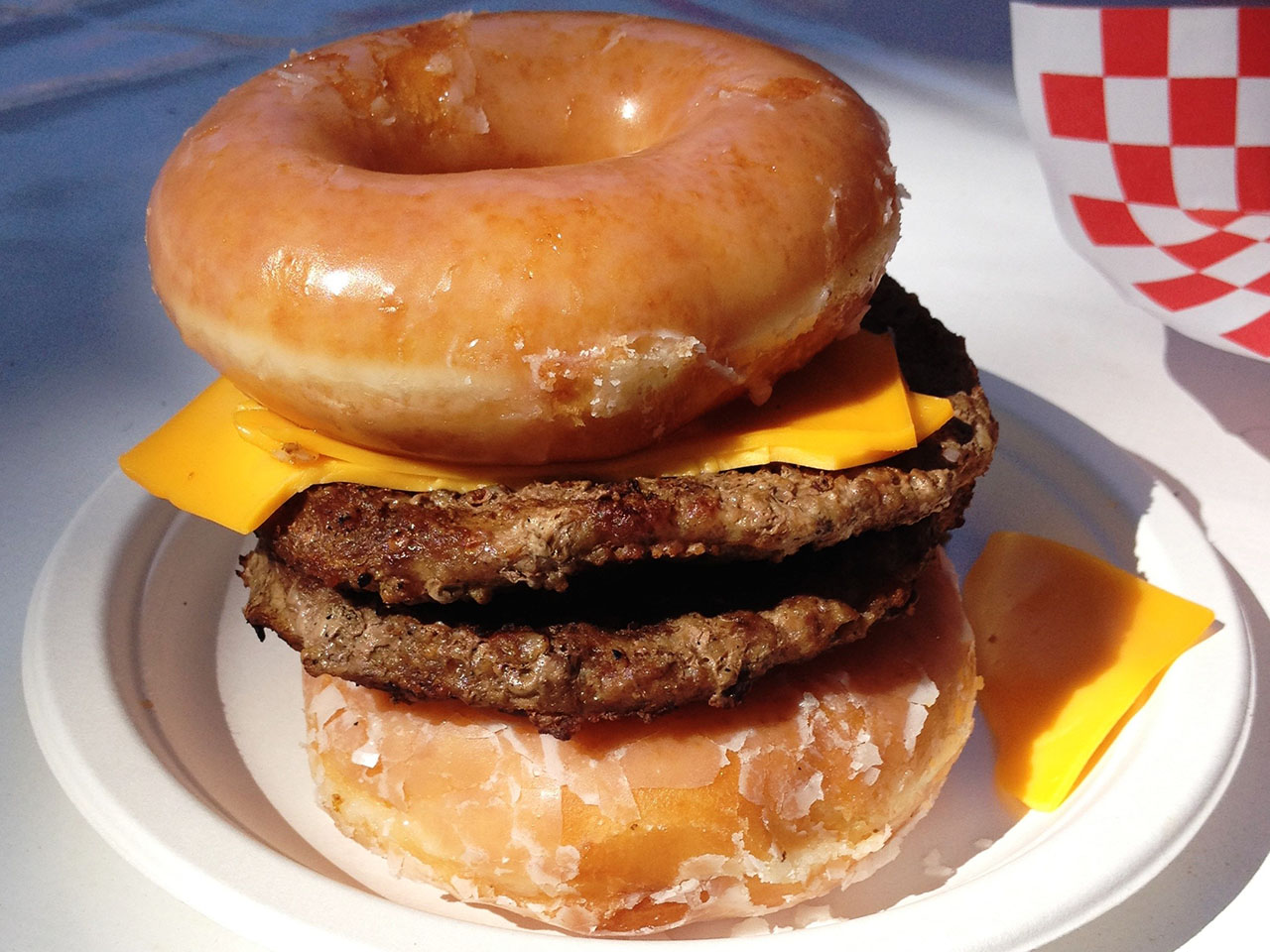 You can’t get more American than a county fair. It’s one of the most iconic events on a city, town or state’s calendar and a chance to show off everything that’s great about the US. Spectacular livestock, amazing produce, thrilling carnival rides and games, and tummy growling fair foods. Of course this does include the most incredible range of deep fried foods you could ever imagine – and a few even the hungriest foodies couldn’t imagine.

You don’t even have to go too far to find a county fair – Los Angeles is home to one of the best.

The Los Angeles County Fair is the largest county fair in the United States and is held every year for a month at the end of August. Just over an hour’s drive from the airport, the LACF is an impressive display of all things Americana. It’s got your traditional carnival roller coasters, thrill rides and games (which seem impossible to win yet hundreds of fair goers proudly walk around with their trophy stuffed toys). It also features the state’s best livestock and farming produce. This year, the fair also included a spectacular night time light display and an evening concert series, along with the monster trucks for the young and young at heart.

For me though, my trip to the largest county fair in the USA was all about satisfying an unquenchable hunger for oily goodness. Yes, I was there for the deep fried food.

For years I’d heard about the wonders of the deep fryer. And I was to meet a legend – the King of Deep Fried Foods, Charlie, of Chicken Charlie’s. Chicken Charlie’s is an iconic American county fair name that has travelled the United States, serving up some of the best fried delicacies to ever hit a cardboard serving tray. He’s fried for some of Hollywood’s biggest names, and is the expert of the fryer. 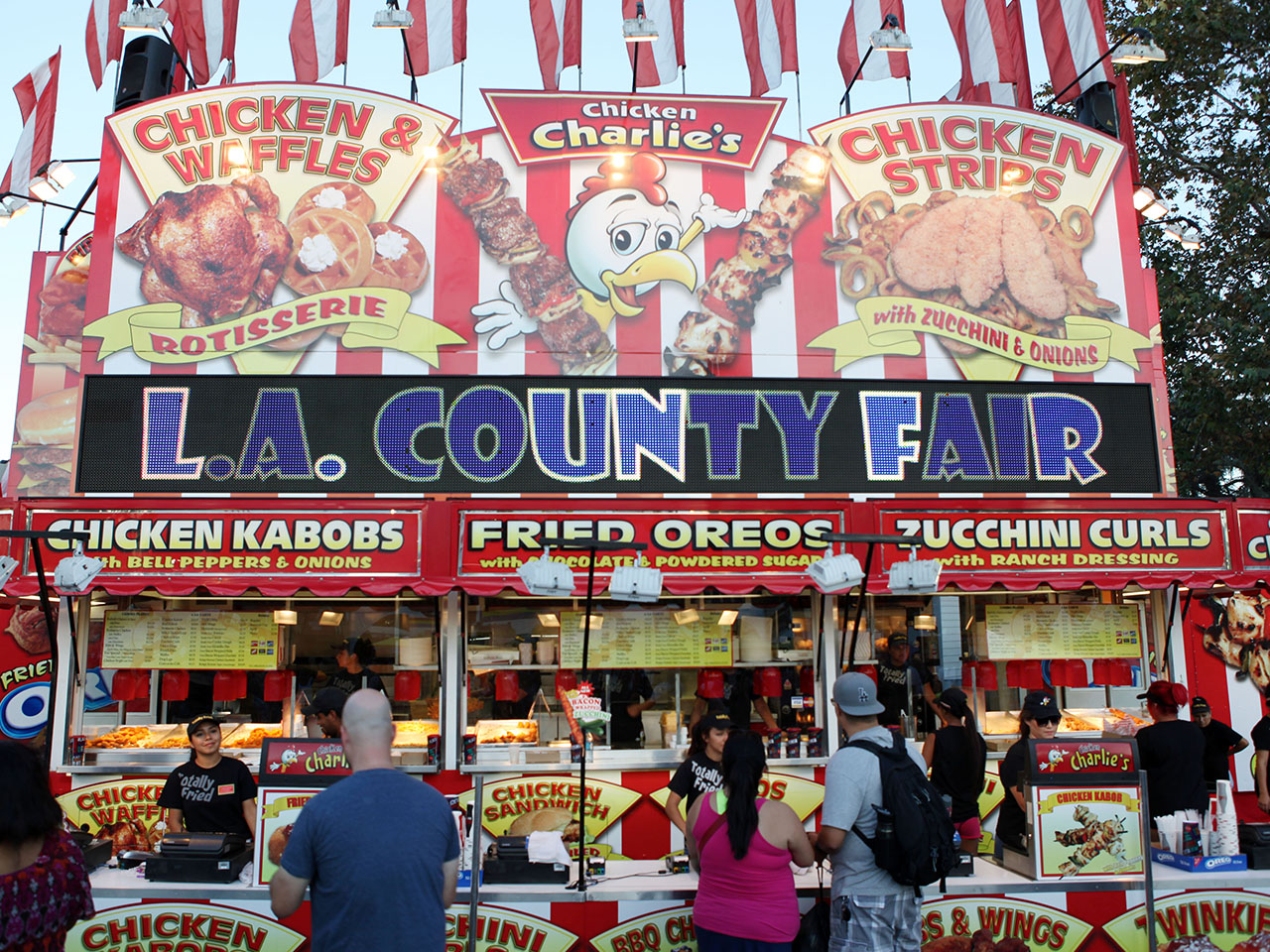 Charlie starts off by showing me the dish that started it all – the deep fried Oreo. The process is simple. He dunks the Oreos in a special batter, throws them in the deep fryer and pulls out a golden ball of high calorie goodness. After dusting with powdered sugar and chocolate, I taste it. I’m hooked. The batter is light and fluffy on the inside, crunchy on the outside. The middle is still warm, and the Oreo has melted slightly, oozing through my mouth.

From there, we tackle deep fried chicken skin. I have to confess I’m not the biggest fan of chicken skin, but the combination of a crispy batter coating and the right herbs makes this quite a pleasant treat. Deep fried frogs legs, however, were definitely not what I had intended on eating when I had planned a trip to the LA County Fair. Gingerly biting into the drumstick-like delicacy, the taste had familiarities of chicken and fish, with a slightly tough white fish texture.

Then there was the serving of deep fried Doritos. Surely, I thought, Charlie couldn’t possible make my favourite chips even tastier. I was wrong. The thin coating and extra seasoning makes the classic Dorito even more satisfying, even more crunchy and even more addictive. This writer is salivating at the sheer memory of it.

And that was just a warm up. This year’s LA County Fair highlight for many people was Charlie’s latest twisted creation – the Krispy Kreme Triple Decker Cheeseburger. Yes, that’s right, three beef patties and three slices of American cheese sandwiched between two Krispy Kreme doughnuts. This is one of the most incredibly indulgent, mind and tummy blowing fair foods you’ll ever experience.

Never before had I tasted such a sweet and savoury combination. It was a meat overload which strangely (very strangely) saw an unusual marriage of flavours. It’s an incredibly messy dish – manners and hygiene were obviously not on Charlie’s priority when concocting this meal, but it fits the county fair brief perfectly.

It’s been an experience that my tummy will never let me forget, and as terrifying as it was, I’m proud of conquering it. Where else in there world could you get such inspiring culinary diversity out of one single fryer?