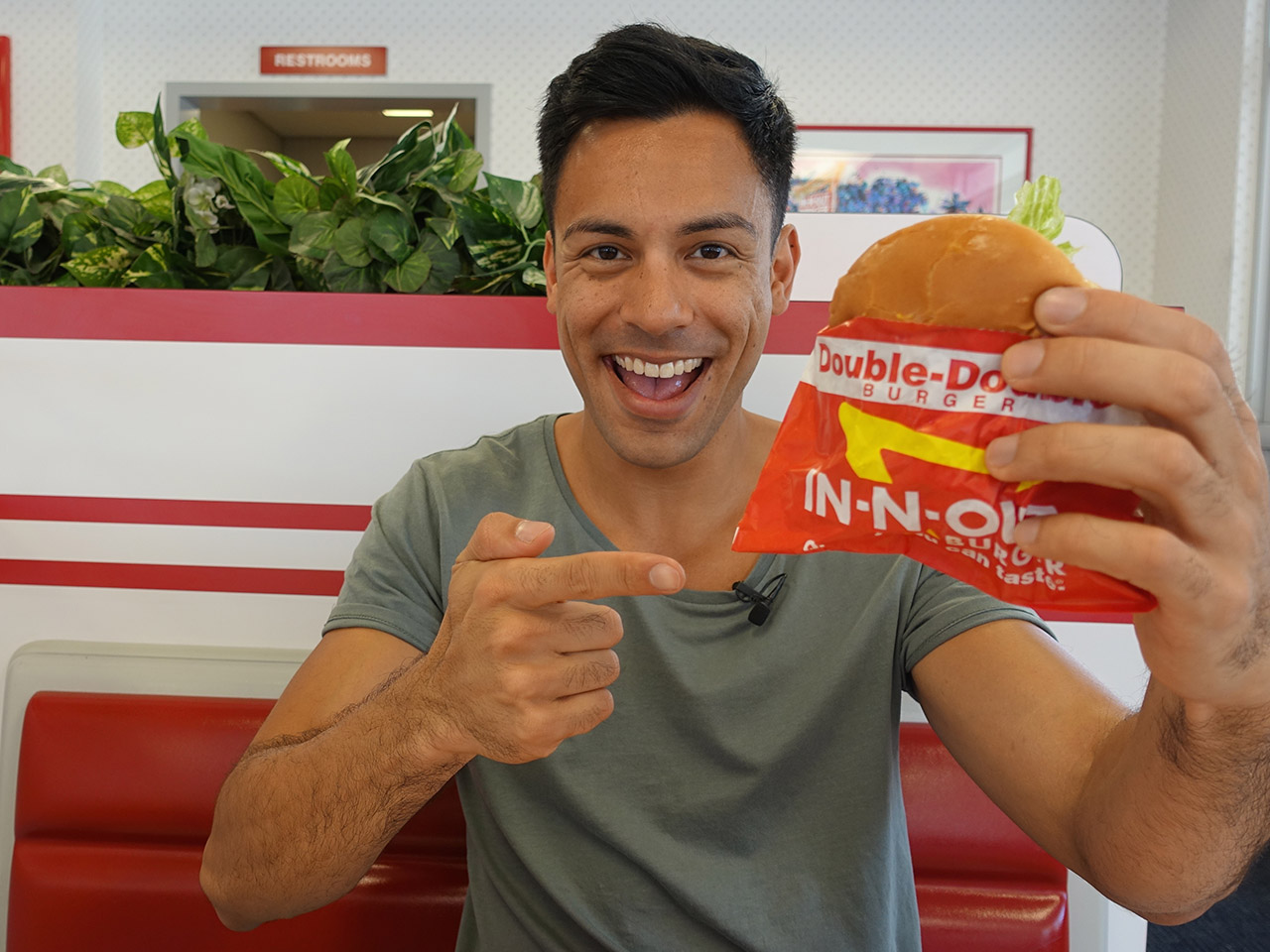 I’ve got a confession to make. A deep, dark and terrible secret.

I’ve travelled all over the world, to some of the classiest cities, and have been lucky enough to eat in some of the world’s most impressive restaurants. But at the end of the day, there’s nothing I enjoy more, nothing that satisfies my insatiable appetite for meat and carbs, than a good hamburger. There’s something about the guilty pleasure of juicy, hot ground beef, fresh salads, saucy toppings dripping from a tender bun…it’s just… I can’t… it does things to me.

And so, a great deal of my travels involve searching out the best hamburgers a country has to offer. And of course, in the United States, you’re expecting only the very best of hamburgers.

You can get fancy burgers with all the gourmet trimmings and latest fads, like kale and quinoa on a wholemeal brioche, but when it comes down to it, we all have a need for just a good, decently priced hamburger.

So, I’ve seen it as my responsibility to travellers all over the globe to put my stomach on the line in search of America’s best fast food burgers. That is, hamburgers you can buy from a fast food chain that cost less than $10.

Yes, I know that my top four list will cause controversy – I’m expecting a parliamentary inquest and federal level investigation into my findings as a result. But, regardless, here are my own personal top four burger chains that travellers need to check out when visiting the USA.

Washington DC based chain, Five Guys has to be up there as one of my very favourite burger chains in America. It’s an incredibly simple set up. They just sell good hamburgers, with stuff on them. And by that, I mean they sell their basic hamburger, which you can get as a double, and it’s up to each customer to choose what toppings they want on their burger. The best part is it’s all the same price – if you get one topping or all toppings, it’s the same price. I’ve been told that there’s over 250,000 different combinations that can be made from the 15 different toppings. Sounds like a bit of a challenge, if you ask me.

If that’s not enough, each Five Guys store also has a huge box of peanuts for customers to munch on while they wait, for free. Talk about getting your money’s worth! A huge favourite of mine are the Cajun fries – they’re seriously addictive, and I’ll confess, have often become a meal of their own for me…

One disclaimer – Five Guys burgers aren’t the fastest burgers in the world, which I personally see as a good thing. All the patties are cooked to order, and the burgers are put together carefully by their staff. The food is presented simply, which is part of their old school appeal. Burgers are wrapped in foil, which keeps them moist and warm, and then stuffed into a plain brown paper bag and the fries are served in a large paper cup. It’s a big feed and you’ll always be able to get variety here, by mixing up your burger toppings. Depending on how many toppings you get, the burgers will get rather messy – but I’m not complaining.

Believe it or not, the biggest fast food hamburger chains in the south of the USA aren’t the Ronald or the Colonel – it’s Whataburger. This Texas favourite, and by favourite, I mean these southerners are crazy about Whataburger.

In true Texas style, the burgers are big. They’re definitely a two handed task. They also keep their signature burger, the Number 1, pretty simple. Beef, mustard, lettuce, tomatoes, pickles and diced onions on a toasted bun. It’s a good, basic burger for someone looking to satisfy that craving. It does the job, and does simple well.

The one trait that sets Whataburger apart is the southern hospitality you’ll find in their stores. You really can notice the warmth of this family owned and run business. There’s a real emphasis on customer service so despite the “fast food” setup, all meals are delivered to your table by the staff. And you’re free to customise your burgers in whatever way you like.

I know this article is about the best burgers, but I want to push that definition and urge you to try their Patty Melt. It’s essentially a delicious toasted sandwich with two beef patties, grilled onions and cheese with pepper sauce. And my god, it’s good. It really doesn’t look or taste like something that would come from a fast food chain, but rather, from your southern aunt’s kitchen.

This iconic New York City burger joint has a cult following with good reason. Starting from humble beginnings with just one “shack” at Madison Square Park, Shake Shack is one of my must dos when visiting the Big Apple and can now be found all across the country.

It’s no exaggeration to say that they’ve got a ridiculously big following. The lines for Shake Shack’s Madison Square Park location can often been seen snaking all the way through the park. People will literally line up for hours to get their hands on one of these burgers, so much so, that Shake Shack actually now have a “Shack Cam” so customers can monitor the line.

Why do they wait? These burgers are incredibly fresh. You can taste the quality ingredients, and the pure Angus beef makes the burger tender and flavourful. In true New York style, you can also choose from a selection of alcoholic beverages, with specially chosen wines and beers on offer to accompany your burgers. Only in New York would you be able to order a glass of red to sip while eating a burger in a park in the sunshine! 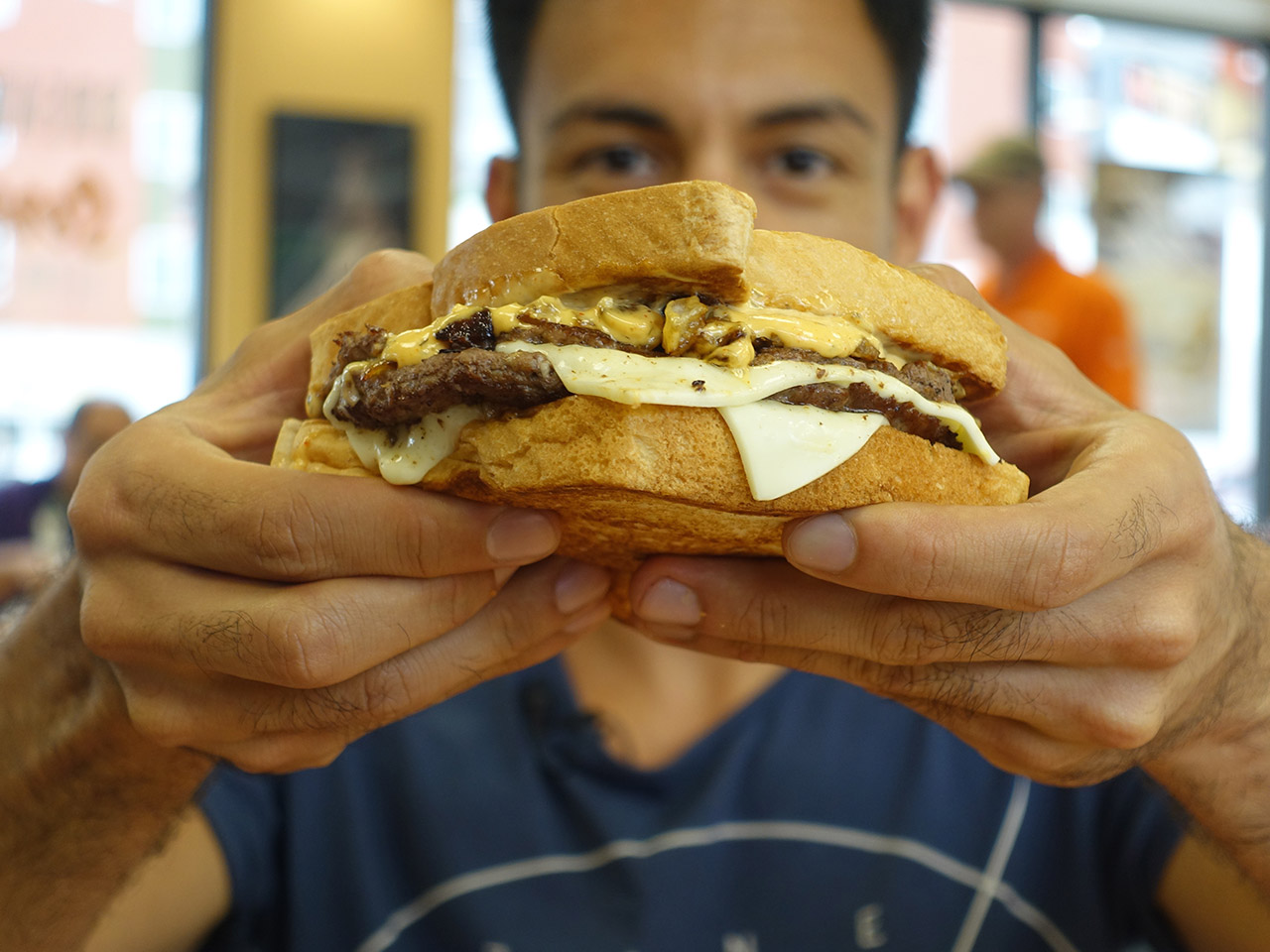 I couldn’t do a piece on America’s best burgers without mentioning In-N-out Burger. Since 1948, this California institution has been a tourist destination for travellers from all over the world.

Its calling card is the simple, cheap burgers they produce. You’re not getting a fancy burger here. It’s a standard burger with a beef patty, lettuce, tomato, onion on a toasted bun. But it’s simple done right, with high quality ingredients cooked well.

I believe that In-N-Out is an experience. From discovering the “secret menu” (which, let’s be honest, isn’t so secret), and adding “animal style fries”, that is, fries with grilled onions, melted cheese and special In-N-Out sauce all on top, to conquering the 4×4 – four beef patties and four slices of cheese, it’s all about the experience of visiting In-N-Out after a big night out.

One feature of In-N-Out which I do have to compliment is their pricing. For only a few bucks, you can get yourself a quality hamburger. And it’s an even playing field at In-N-Out. You’ll get the local kids from around the block sitting next to a table of businessmen in suits. The Hollywood location is notorious for post awards nights gatherings of starving celebrities looking to break their fast with a massive burger binge.

Sure, you can explore the USA’s fine dining and fancy restaurants but there’s something satisfying about getting into the local fast food joints here and embracing the carbs with a good old fashioned cheeseburger. I say forget about the dieting, and forget about the rules – you’re on holidays. Don’t be ashamed of your fast food cravings and hamburger fantasies. Let loose and celebrate the tasty, satisfying hamburger!