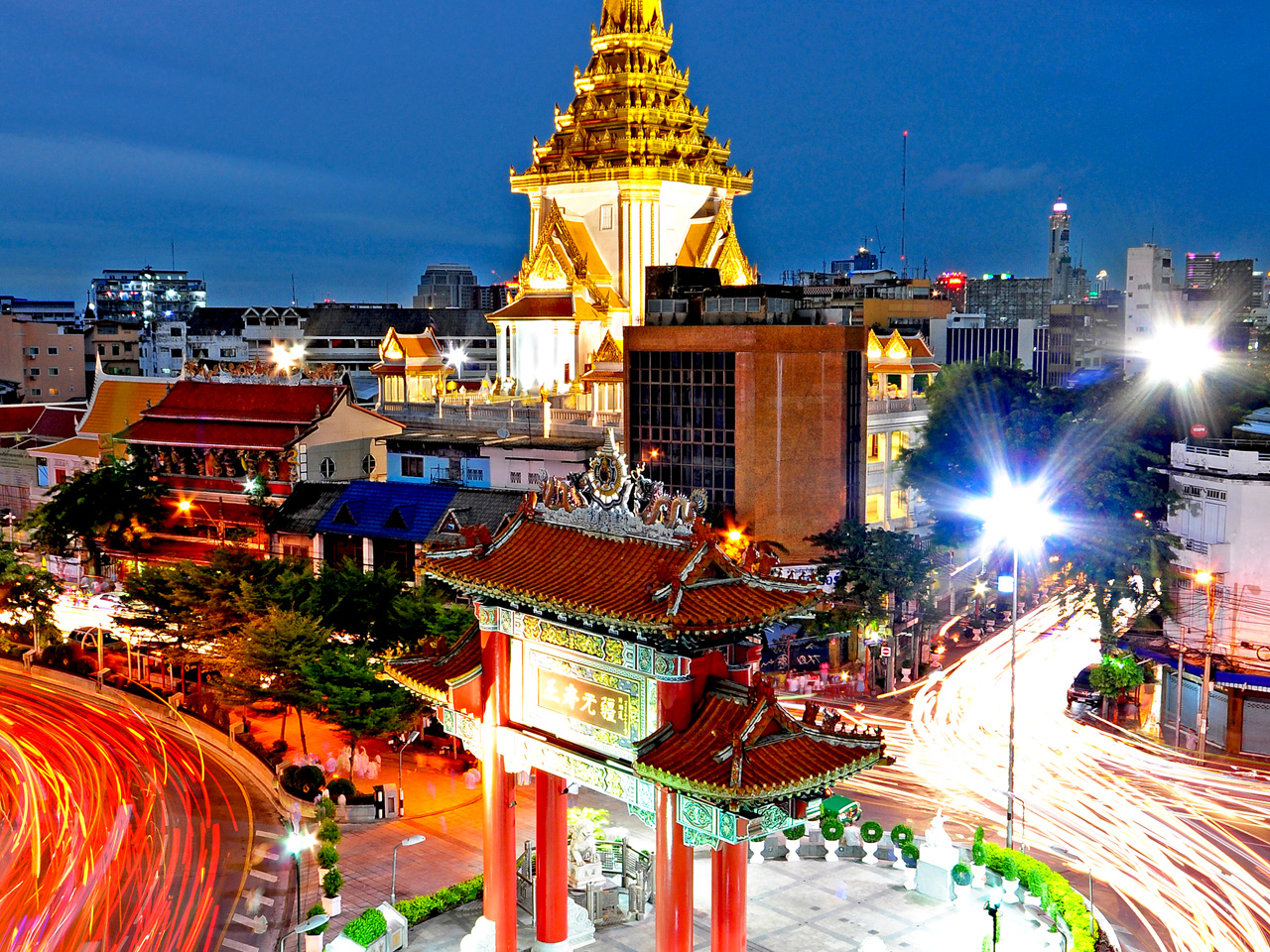 Forget fancy restaurants – everything you need to know about Thai food can be found on the busy streets of Bangkok. Across the city, stalls open at the crack of dawn and serve up hundreds of portions of cheap, chilli-spiked food until late at night. With only a few hundred baht in your pocket, you can sample the fragrant heat of some of the country’s best-loved culinary staples.

Expedia’s Aussie travellers tend to stop by Bangkok for 2-3 days, travelling after the monsoon season dries up in November. December is the most popular time to visit but you’ll find great deals during the rainy season. Check out Expedia’s Bangkok Holidays for ideas.

Thin rice noodles, fragrant broth, slices of roast pork, garnished with coriander, bean sprouts and white pepper – kuaytiaw was introduced by Chinese workers in the early 1900s. Over the years Thai twists such as coconut milk have been added. The best place to try it is in Yaowarat. Uncover more China-inspired dishes on a food discovery walk, sampling fresh seafood and dumplings, in between visits to Wat Traimit Temple and the buzzing Saphan Put Night Market. Close to the night markets is Silom-Sathorn, a suburb popular with Expedia’s Aussie Travellers. Try Furama Silom, a family friendly hotel with a pool when you need to chill out after a food coma.

Phat thai in the shadow of the Golden Mountain

Ok, so it’s not technically a street-food stall, but most of the cooking takes place out on the pavement. We’re talking about Thip Samai (313 Thanon Mahachai) in the old, waterside district of Phra Nakorn. Phat thai, in its simplest form consists of noodles, crushed peanuts, shallots and fried egg, and is served all over the city, especially around the backpacker haven Khao San Road. So what makes it so special? Well, it’s been running for nearly 50 years and serves different takes on the traditional dish – adding tofu, jumbo shrimps, and even wrapping noodle dishes in paper-thin omelette. Even if you’re not hungry, the sheer scale of this slick operation is worth witnessing. 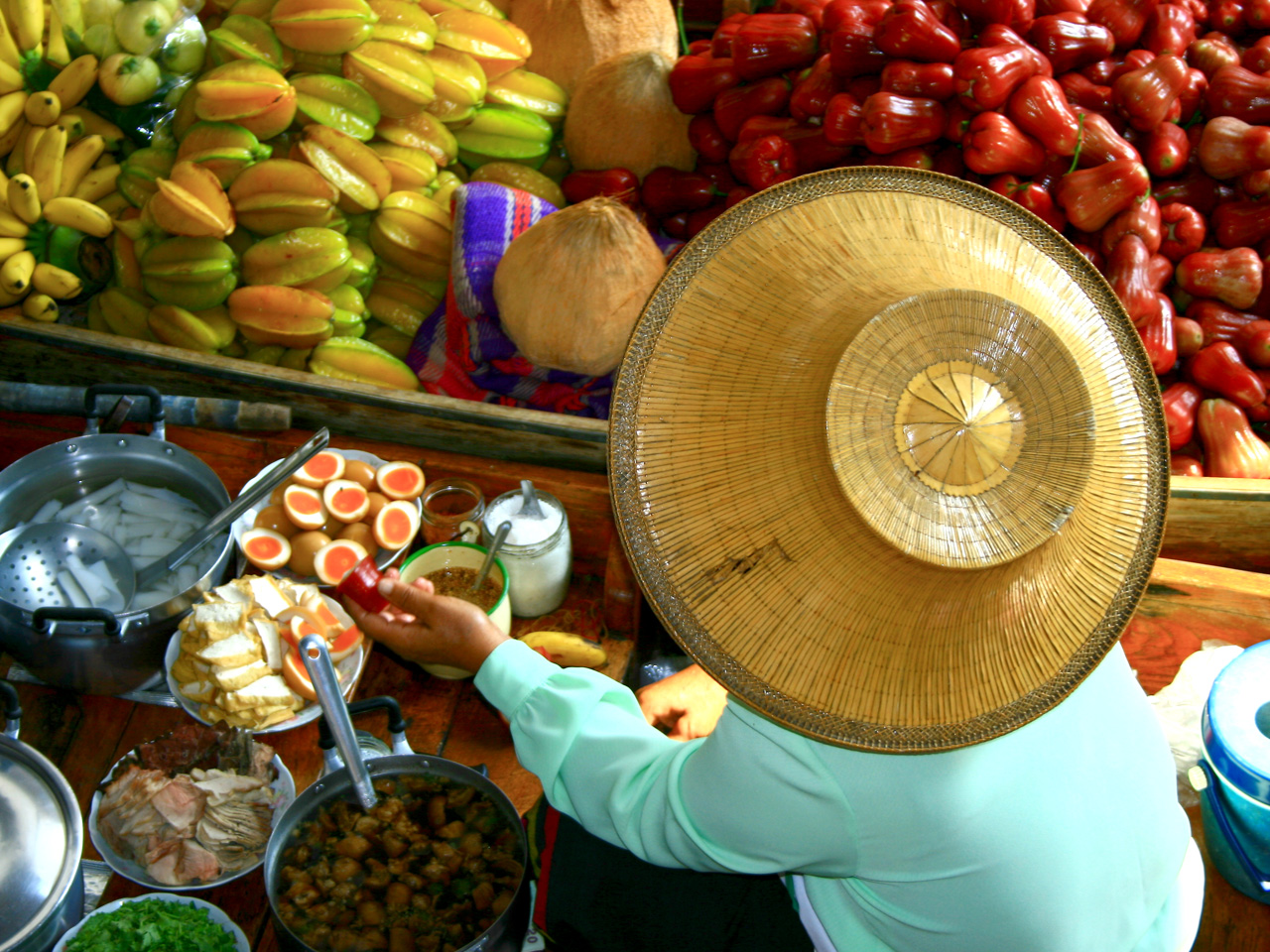 Som tam (green papaya salad) from your own boat

A clear indicator of the culinary link between Thailand and neighbouring Laos, this dish originated in the northeast but quickly took Bangkok by storm. Shredded, unripe papaya is combined with fish sauce, lime juice, chillies, green beans and garlic, and sold (often for less than $1.50) by vendors across the city. If you spot a stall with a large, well-loved mortar and pestle, you’re in luck. Find the salad at its freshest from vendors chugging down the canals of Damnoen Saduak. Just over 100km from the city, the floating market is not to be missed.

Two Thai favourites – holy basil and pork belly – come together in this delicious dish. Stir-fried with garlic, chilli, and oyster and soy sauces, the fiery leaves give the layers of crispy, fatty meat a real kick. Served with rice and sometimes a fried egg, it’s a god among curries. Grab a dish from the street stalls near Wat Pho (spot the orange-robed monks having their daily meal here), then head inside for a different spiritual experience. The sprawling temple complex is home to a 46-metre-long reclining gold leaf Buddha. Wat Po is usually less busy than nearby Royal Grand Palace – it even runs Thai massage classes, so you can leave feeling totally zen.

The Royal Grand Palace – soaring towers, intricate rooftops and colourful mosaics – deserves an afternoon. Sections date back to 1782. Don’t miss the Dusit Maha Prasat (a stunning seven-tiered golden spire) and the Temple of the Emerald Buddha (a green statue carved out of one piece of jade). Once you’ve seen every nook and cranny, cool down with dessert at Kao Neoo Korpanich (431-433 Tanao Road, Saochingcha), a five-minute taxi ride away. The family business has been serving this dish for generations – sticky rice with coconut milk, steamed in pandan leaves, served with ripe mango and toasted mung beans. Pick your own mango from the huge variety on display.

Next post Behind the Scenes: The magical world of Harry Potter