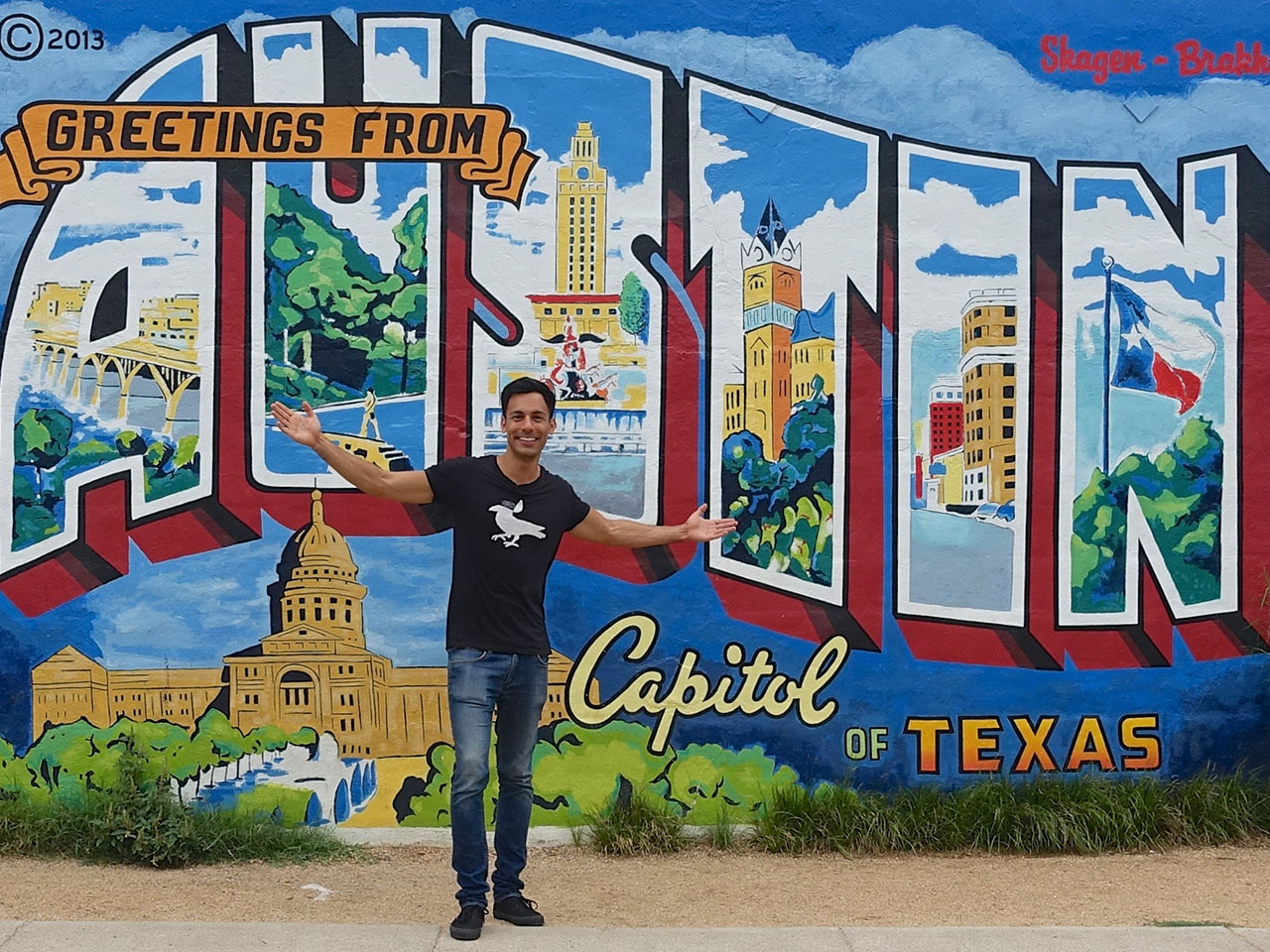 Austin, Texas is one of the hottest must-do destinations in the USA. Combining southern warmth and a cosmopolitan vibrancy, it’s fast becoming one of the most popular destinations for travellers to North America. Move over LA and New York – I’m hitting the south to see what this crazy, weird city is all about!

A City by the River

At the heart of Austin lies its shimmering centre piece – Lady Bird Lake. A reservoir on the Colorado River, the lake is a great spot for kayaking, rowing and paddle boating. Its banks are always busy with eager joggers, sweating it out. For cyclists, a 16 kilometre track around the lake is a great way to see the best of the city from all angles.

Downtown Austin sits on the northern banks of the lake, and is a thriving central part of the city. Home to endless cafes, restaurants and hotels, it’s a paradise for foodies and music junkies alike. Most of the city’s most convenient accommodation options are located within a five kilometre radius of downtown Austin. Expedia’s Aussie travellers spend 2-3 nights in the city and stay central to enjoy all the action.

The Driskill Hotel is one of the most iconic locations in downtown Austin. The grand building has a highly recommended café, with a chocolate cake made from the original recipe used when the building opened 130 years ago. I can’t go on without mentioning the stunning bar, where you’ll be served home made beef jerky with your cocktails.

Speaking of food, Austin is proud to boast some of the best barbecue in the United States – a claim they’re very proud of. In fact, the standard of barbecue in the city is so high customers literally travel half way across the globe just to feast on some of the slow cooked goodness. 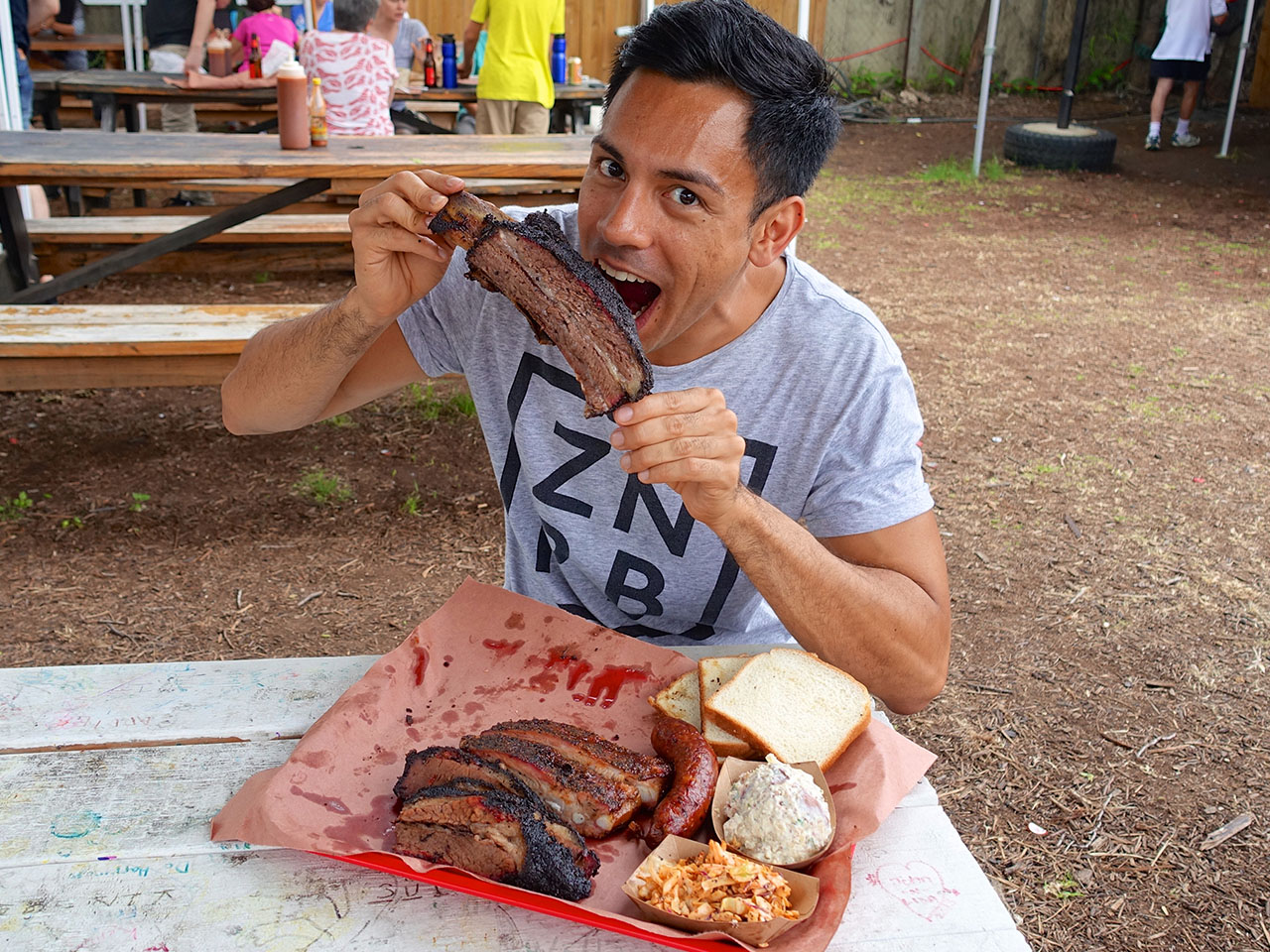 If you were expecting white tablecloths and fancy silverware with your BBQ, you’ll be bitterly disappointed. In Austin, it’s all about making the food the main priority, and ensuring that it’s accessible to everyone. Most of the best barbecue restaurants in the city are shacks, caravans or outdoor kitchens, and you’ll be eating on picnic tables with plastic cutlery. In all fairness, barbecue isn’t the cleanest meal, so this might be for the best!

Upon recommendation from several Austinites, I made my way to La Barbecue – allegedly one of the city’s best barbecue joints, and a must do for foodies in Austin. I’d already been warned about their long lines and arrived early. There were already a few eager foodies waiting in a diligent queue in front of a very modest-looking food caravan, parked in a corner park area. It was the most modest of eateries I’ve seen in a while – one caravan serving customers, another larger caravan housing a large barbecue oven, surrounded by picnic tables and satisfied diners.

The food itself was incredible. In true Texas style, it’s all about size and the barbecue portions can be as huge as you want. Most of the barbecue meat is sold by weight, with prices messily scrawled on a piece of butchers paper tacked to the side of the caravan. I was in awe of the large trays of meat that people walked away with. Hey, if you’re spending hours lining up for barbecue, you may as well go all out. After finally digging into the most succulent, tender and downright tasty barbecue I’ve ever had, I had to agree with that strategy. 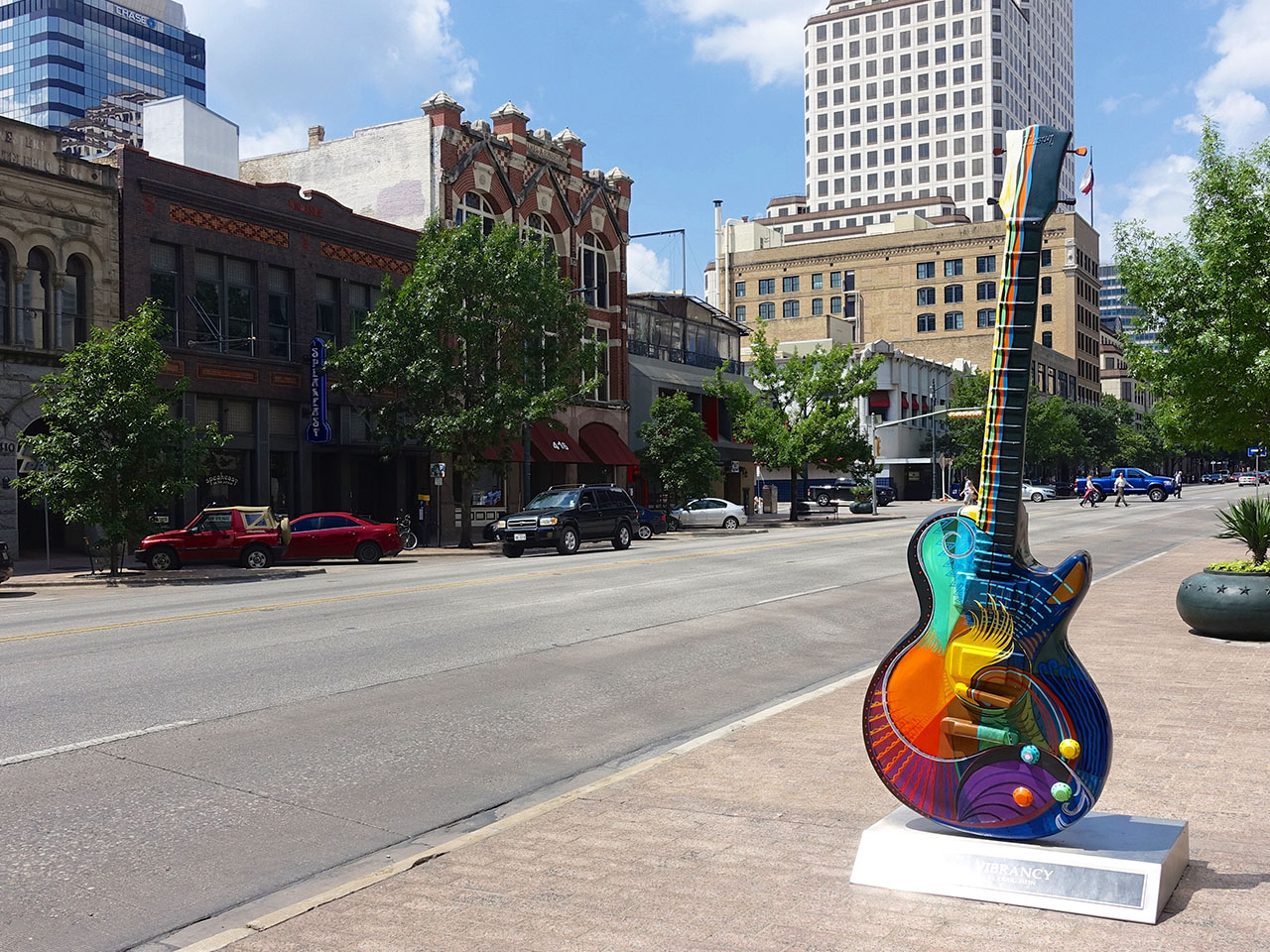 South Congress is one of Austin’s true charms. Just a mile south of the river lies some of the most unique and fascinating shopping you’ll find. Here’s my top three picks for travellers looking to spend a couple of those American dollars: 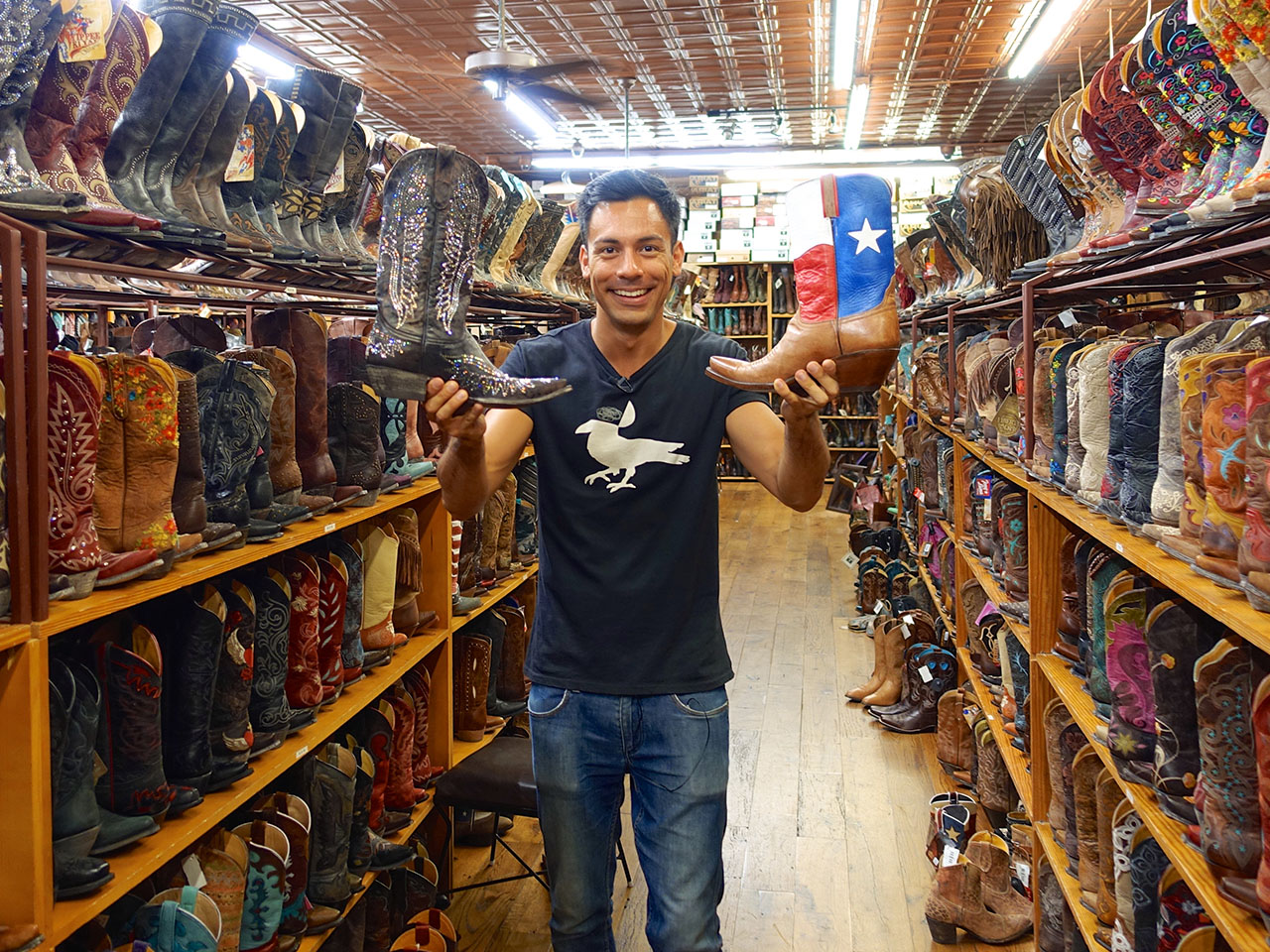 The Live Music Capital of the World

Austin is known for its incredible live music scene, and proudly boasts the title of being the live music capital of the world. With more than 250 live music venues, there’s something for every music lover every night of the week. A live music performance really gets the atmosphere going and is a great way of showcasing local talent.

One of the most recognisable names music in America is Austin City Limits – the oldest music television show in the country, airing in living rooms for almost forty years. It’s an iconic Austin brand that has showcased some of the world’s most exceptional musical names – from Willie Nelson, to the Dixie Chicks, to Coldplay and the Foo Fighters.

The public can apply for tickets to the live taping of the shows by keeping an eye on their website. It’s a lottery based ticket allocation, so it all depends on whether or not you’re lucky enough to score a seat. But, if you time it right, and you’re selected in the lottery, you’re in for one of the most memorable nights of music you’ll experience. And, the best part of the ticketing is that it’s all totally free. You’ll get an intimate performance in a really beautiful setting without having to fork out a cent! 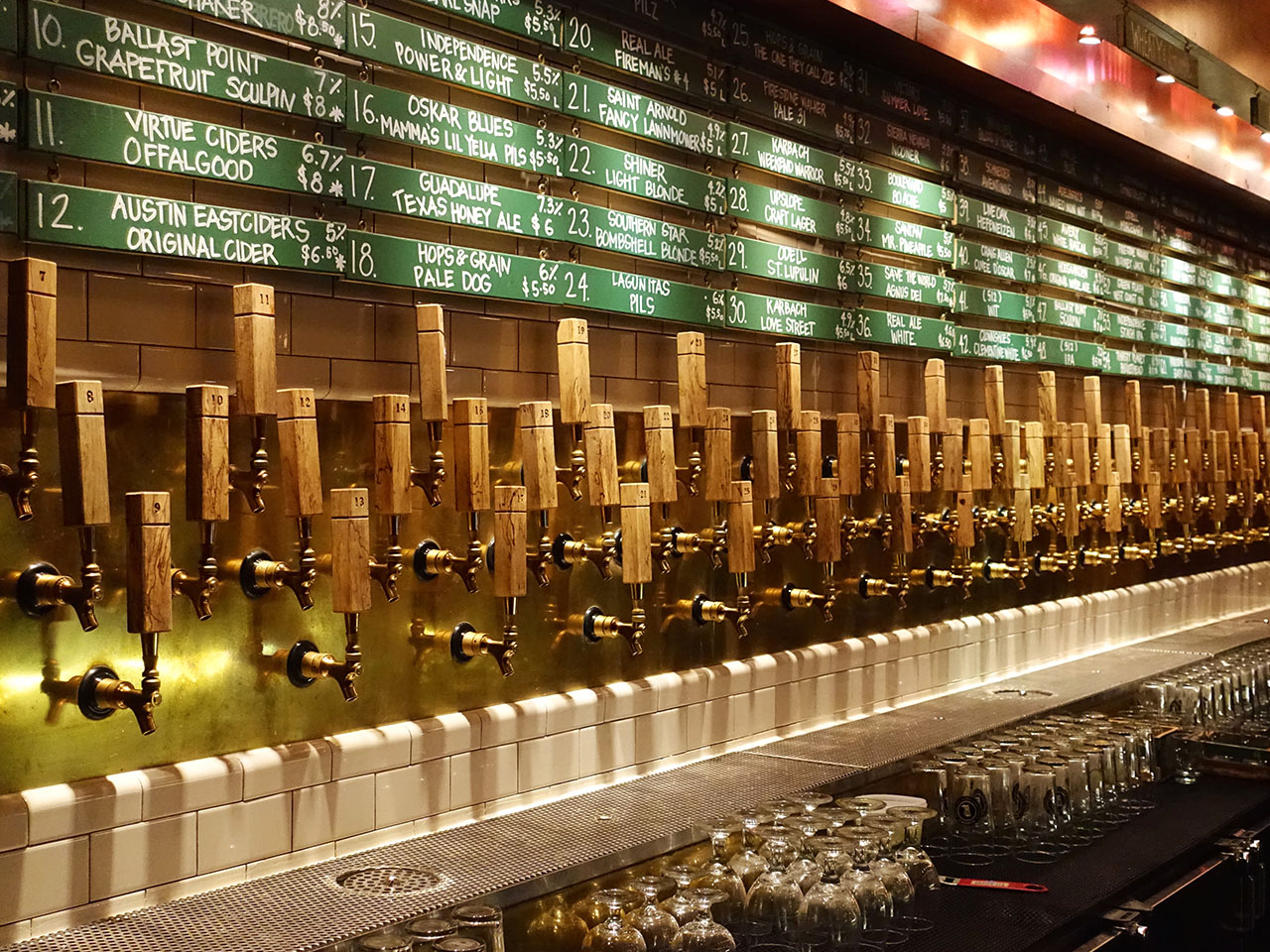 Without a doubt, Austin has some of the best nightlife in the USA. It’s a really great blend of southern hospitality, youthful vibrancy and electric energy that draws party goers from all corners of the country. And the fact that there’s a huge university in the middle of the city doesn’t hurt the festivities either.

Start at Sixth Street – it’s a dynamic and effervescent hub for tourists and university students, thanks to cheap drinks and a street jam packed with revellers looking for a great night out. In fact, the city closes the street to traffic on busy nights, and it becomes a sea of fun loving pub crawlers all mingling in between music filled drinking holes.

For me, though, the jewel in the crown of Austin’s nightlife has to be Rainey Street. Only around five minutes from the centre of downtown Austin lies a street of houses. These formerly old, residential houses are, however, slightly different – they’ve all been converted into some of the most unique bars you’ll ever come across. And there’s entire street filled with them.

It’s a set up that you’d only ever find here in Austin. You’re literally walking up onto porches and through front doors into these establishments. Some even have garden furniture on the front veranda. And if one thing has been kept from their original state, it’s the homely hospitality.

You can spend the night hopping from one house (or rather, bar) to the next. And each has their own unique look and feel. One thing that is guaranteed though, is that they’ll each be filled with a great, positive energy that’s infectious. And that you’ll have no problems in finding a great drink, and some brilliant company with the Austin locals.

After my first trip to Austin, I can wholeheartedly say it’s one of my favourite cities in the USA. It’s gone through an incredible growth over the last few years, and is only becoming more popular with each year that passes. It’s seeing spectacular visitor numbers, and its events calendar is jam packed with everything from sporting spectacles, to live music extravaganzas and cultural events. If you’re after a truly unique mix of fascinating Americana, brilliant nightlife, amazing cuisine and the best live music in the world – you have to check this incredible city out.

Texas may be known for its southern warmth, but Austin is just plain cool.