14 Experiences Aussies Would be Crazy to Miss 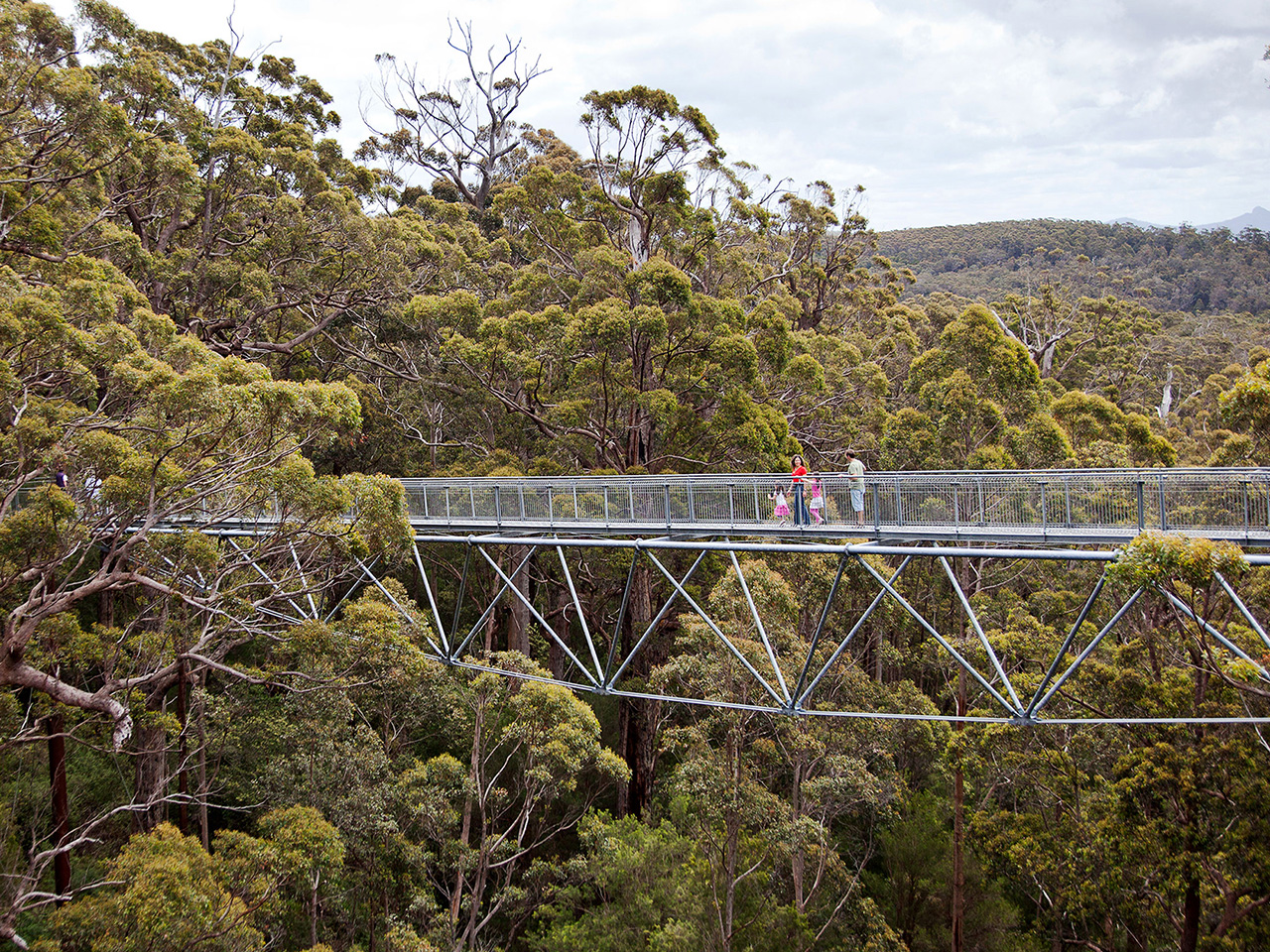 It’s no secret Australia has stunning landscapes, rich cultural centres and a wealth of wildlife you won’t find anywhere else. But it’s one thing to talk about these sights, and another to experience them. From flights above the rugged Bungle Bungle Range to snorkelling sessions through the waters of untouched rainforests, this country is home to tons of electrifying adventures. Whether you want to scream yourself silly on a Gold Coast rollercoaster or would rather sip wine in WA’s oldest vineyard, awesome things to do can be found in your own backyard and all across the country. If you’re feeling adventurous, follow our picks for 14 must-try activities that should be on every Aussie’s bucket list.

Traipse among treetops in the Valley of the Giants

Show your fear of heights who’s boss on this one-of-a-kind walking trail among the tops of towering, 400-year-old trees known as Giant Tingles. Tucked between the towns of Walpole and Denmark on Australia’s southern coast, the 600-metre-long Tree Top Walk through the Valley of the Giants lets you bask in the region’s beauty from 40 metres above the forest floor. Follow the trail to the Ancient Empire boardwalk, where you can step through the trunk of a hollowed-out Giant. Head to Denmark for dinner and discussion of the day’s events at Pepper & Salt, where you’ll sip boutique wines and feast on fresh produce against a blissful backdrop.

Buzz past branches and twirl around tree trunks as you blaze through the Central Coast bush at blistering speeds. The first of its kind in Australia, and the longest in the world, this heart-pounding ride combines the rush of a rollercoaster with the freedom of a zip line. Choose between the 330-metre Pioneer course (with one 360-degree loop!) or opt for the kilometre-long Xtreme line, with three full loops and a mind-bending 540-degree coil. Back on your feet, head to The Entrance Lake House overlooking Tuggerah Lake for chargrilled fillet, lamb confit, and some of the country’s best coffee – at least according to the locals.

Explore your nocturnal side at the Taronga Zoo’s slumber party

If you’re a night owl – or a glamper –the Roar & Snore sleepover at Taronga Zoo might quickly become one of your favourite memories. This after-dark safari lets you get up close with some of the zoo’s creatures and take exclusive nighttime exhibit tours. Hit the hay in a safari-style tent, then wake up the next morning for brekkie with your new animal friends. Want to experience another of the top Sydney attractions? Swing by the laid-back Paddington restaurant for the city’s finest fish, or just grab a pint and do some people-watching from the front bar. There are so many wonderful things to do in Sydney, these activities will top a very long list! 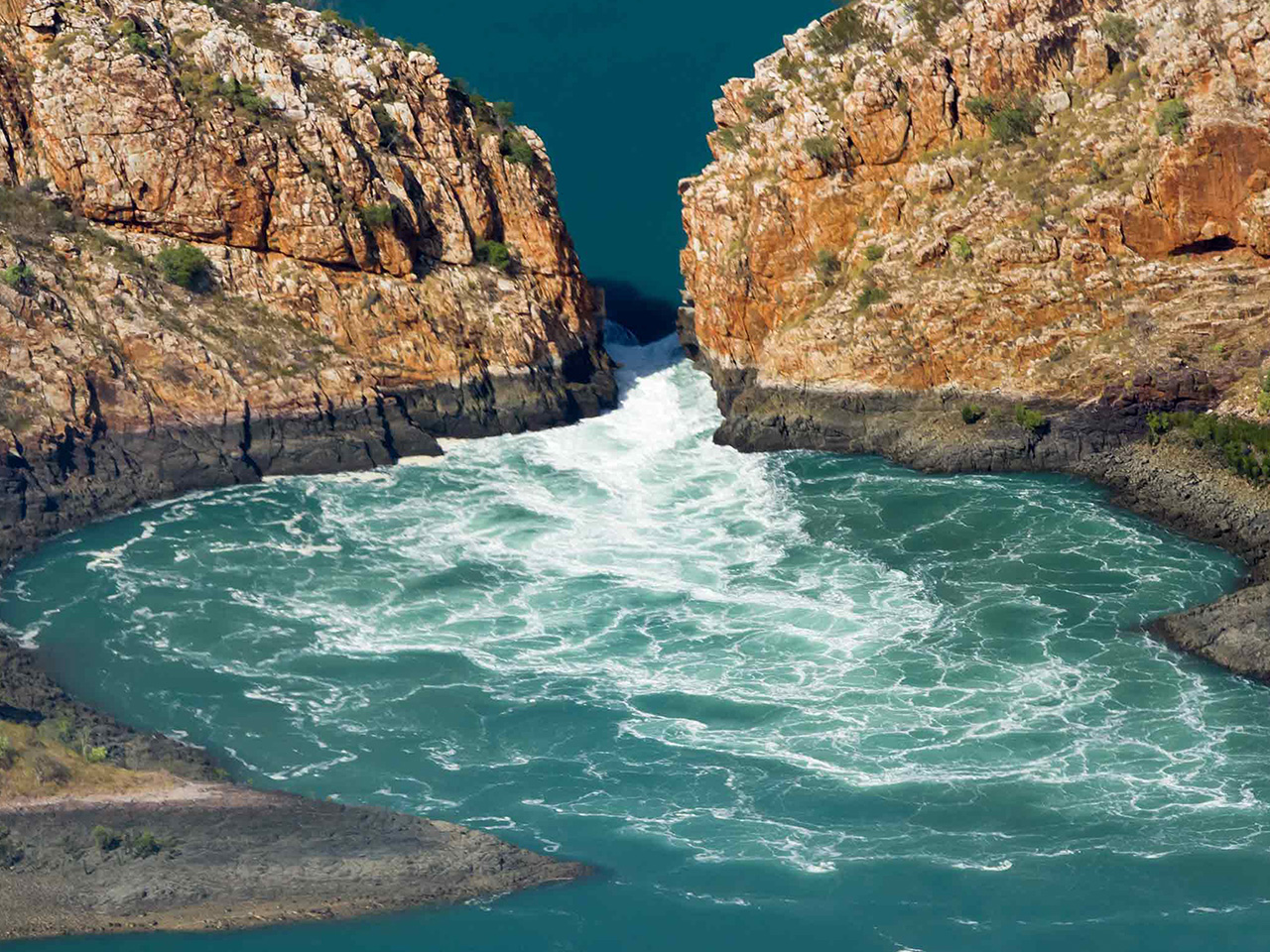 Soar over the Horries in a seaplane

Feel the roar of the engines and watch propellers spin into a blur on a seaplane tour bound for Kimberley’s untouched wilderness. Witness a true natural wonder as you fly above Horizontal Falls, aka the “Horries”. What makes this waterfall so special is that it flows laterally instead of vertically, giving the appearance that it’s engulfing the bay’s surface. Take a seat on one of Horizontal Falls Seaplane Adventures’ first-class turboprops, you’ll see the magic for yourself—while also taking in awe-inspiring views of the archipelago.

Swirl and sip your way along Margaret River

If good wine is your “riesling” for living, stop and smell the rosé on the Margaret River Wineries Day Tour. Begin your day at Cape Lavender Farm, where you’ll linger among more than 90 varieties and feel as though you’ve been whisked away to the lavender fields of Provence.  You can even sample wines made with this flowering herb. Yes, they really love lavender! Then head underground for a self-guided tour of Mammoth Cave, where 35,000-year-old fossils are visible in limestone walls. On the way back to Perth, you’ll catch a glimpse of Cape Leeuwin Lighthouse and far-reaching Busselton Jetty. That’s what we call a day of sightseeing!

Have a ripping time on the Franklin River rapids

Carve your way through rapids, gorges, and rainforests on a whitewater rafting adventure along the Franklin River. Located in the wilderness west of Hobart, the Franklin River Rafting tour from Water by Nature Tasmania isn’t for the faint of heart – fewer than 500 brave souls take on the challenge each year. Those who do are handsomely rewarded, with a chance to see quolls, platypus, and white-breasted sea eagles. If you’ve still got energy afterwards, head to Hobart for a celebratory meal at Aløft, a fine-dining restaurant atop the floating Brooke Street Pier. 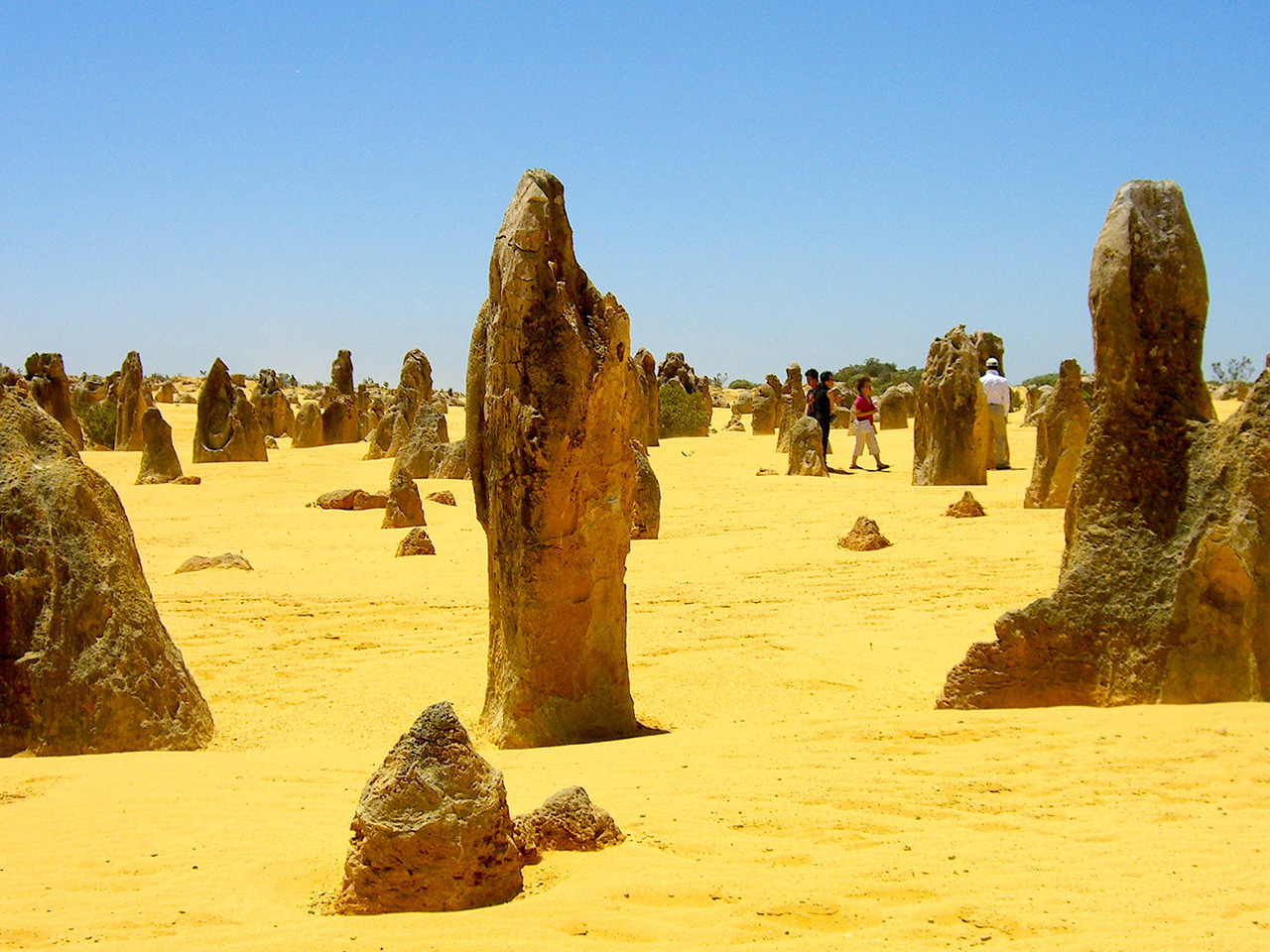 Meet the New Norcia monks and journey through the Pinnacles Desert

Perth may be famous for its sunshine and beaches, but we bet you didn’t know there’s a monastery a few hours outside of town! On the Pinnacles Desert & New Norcia Full-Day Tour, travel north to the town of New Norcia, known for the Roman Catholic Benedictine monks who chose to remain here for life. Next, cruise along Indian Ocean Drive and meet sociable roos, then check out the beach scene in Cervantes, where you can bite into delicious fish and chips at the family-owned Lobster Shack. Finally, walk amid the out-of-this-world limestone landscape in Pinnacles Desert, which is truly unlike anywhere else on Earth.

Drink in the views from Wineglass Bay Lookout

Looking for a trip you and your mates will reminisce about for ages? Look no further than the Freycinet Experience Walk in the remote regions of Tasmania’s eastern shores. Over the course of this guided, four-day trek along the Freycinet Peninsula, you and nine of your besties will leave footprints in white-sand beaches, find your way through white-gum forests, and enjoy the view from the edge of the world at Wineglass Bay Lookout. Each night, you’ll retreat to Friendly Beaches Lodge, and awaken to private beach views – it’s the only structure on this side of Freycinet National Park.

Glimpse cuddly koalas and spot sunbathing sea lions on a Kangaroo Island Full-Day Tour. It all starts with a scenic drive to Cape Jervis, where you’ll board the ferry to the island. Spend some time with slippery new friends at Seal Bay Conservation Park before lunching at Vivonne Bay Bistro. Follow your meal with a self-guided tour past the koalas, kangaroos, and wallabies at Hanson Bay Sanctuary, then stand in awe of the enormous Remarkable Rocks. Save time for a stop at Kangaroo Island Brewery before your return trip to Adelaide – after your first sip, you’ll be thankful you did. 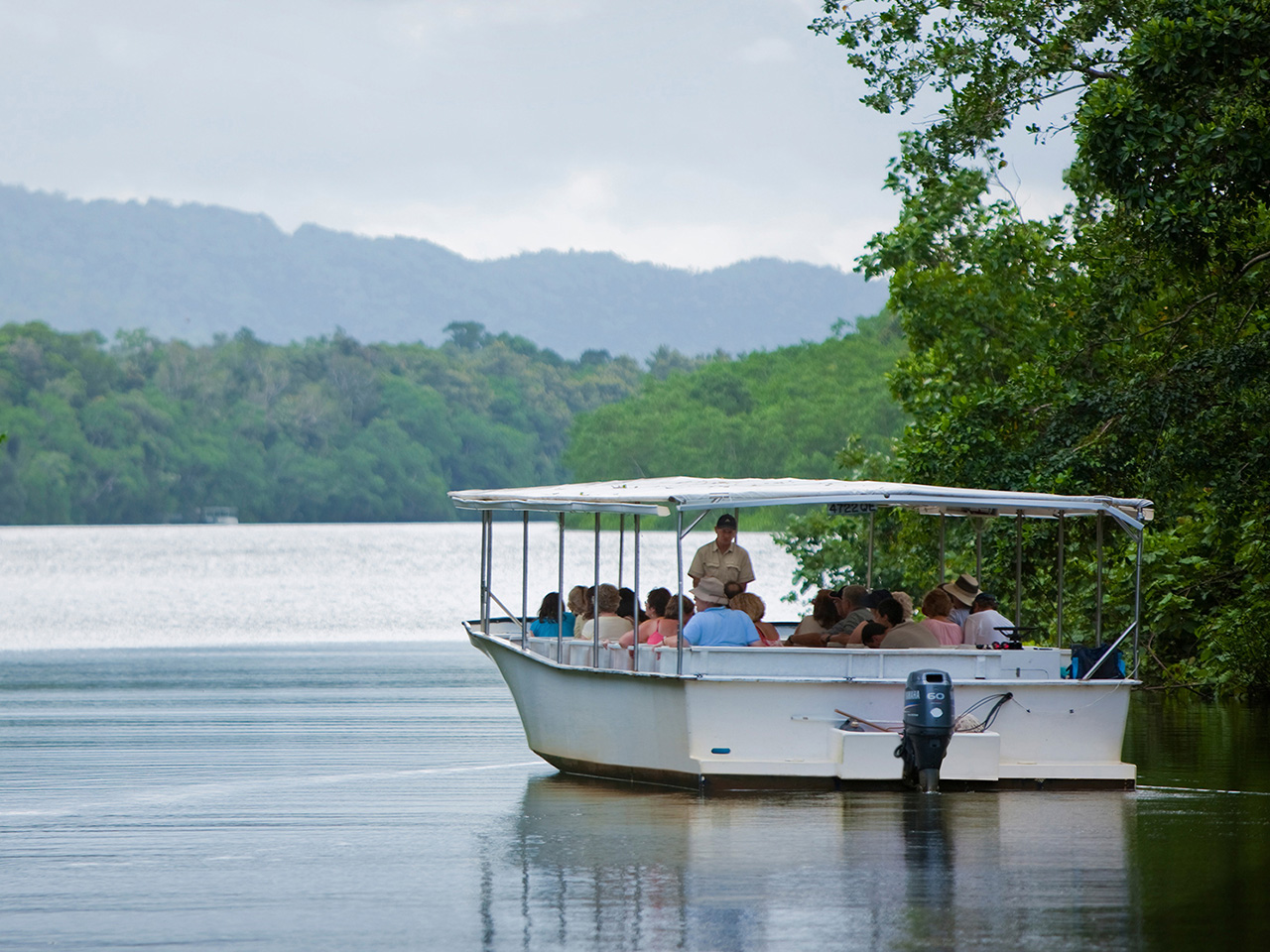 Snorkel in a river in the Daintree Rainforest

You’re drifting along pristine waters and gazing at vibrant underwater creatures. But this isn’t your typical snorkelling trip. The untouched jungle of Daintree Forest is the country’s largest protected rainforest, and it boasts the world’s most diverse ecosystem. A bushwalk here is incredible enough, but for an even more amazing perspective, sign up for river drift snorkelling with Back Country Bliss Adventures. Spy platypus and terrapin turtles on this eco-immersion experience, then head back to Cairns for dinner at Ochre, a trendy and tropical waterfront restaurant specialising in sustainable produce.

>If you’re a wine lover in search of grape-centric activities in Sydney, look just a few hours farther afield to Hunter Valley. Take a seat on Hunter Valley Wine Tour’s luxurious minibus and soak in the scenery on the way to Australia’s oldest wine region. Stop for a cup of tea in charming Wollombi before arriving in Hunter Valley for tastings at its famous family-run vineyards and visits to the local shops. If you stay in Lovedale rather than returning to Sydney, tours here will take you to even more high-quality cellars that are sure to please your palate. For an experience that’s really “uplifting”, step inside one of Balloon Aloft’s baskets for panoramic views of the entire area.

Get a bird’s-eye view of the Bungle Bungles

You could explore the remote Bungle Bungle Range by trekking through its bushwalking tracks, but why do that when you can observe this rugged Kimberley area from the comfort of an air-conditioned aeroplane? Aviair invites you to discover this region for yourself on an incredible two hour flight above Lake Argyle, its nearby diamond mine, and the beloved Bungle Bungles, with their orange-and-black sandstone domes. After taking it all in, dine on local delicacies at the Pumphouse Restaurant, serving up wood-fired pizza and tapas on an open-air deck overlooking Lake Kununurra and the Ord River. 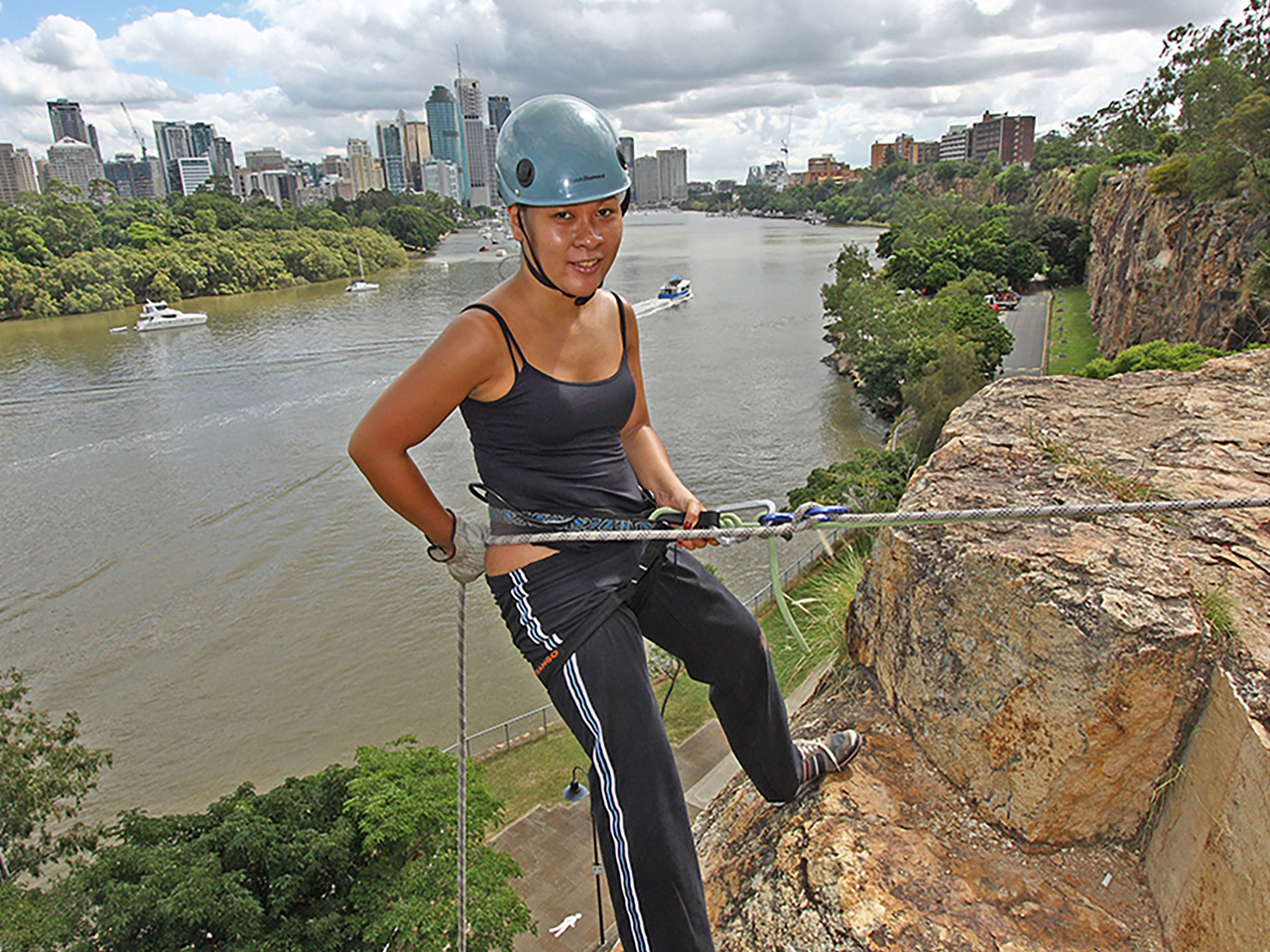 Feel the adrenaline rush of abseiling in Kangaroo Point

Take a walk off the wild side at Kangaroo Point Cliffs in Brisbane, where you’ll safely descend (face first!) down a thrilling, 20-metre vertical drop. First, take in unbeatable city views while waiting for your name to be called, then get ready for some epic abseiling. Work with gravity – and an instructor – to gently touch down back on the ground. Give yourself a high-five at Canvas Cocktail & Wine Bar, where you’ll enjoy rustic Spanish cuisine infused with Southern California flavours. Oh, and you can sip absinthe that drips from a fountain on your table – yes, it’s as cool as it sounds.

Melt your worries away at Peninsula Hot Springs

In search of relaxing things to do in Melbourne’s vicinity? Bliss out in a sauna, plunge pool, or any of the other 20-plus spa experiences awaiting you at Victoria’s first natural hot springs. These thermal waters kick stress to the kerb for good. After a day in the steam, cool off with a European-style beer at the independent Red Hill Brewery, hidden in its own hop garden on the majestic Mornington Peninsula. If you need some eats, treat yourself to a meal at Montalto Restaurant—since it’s on a vineyard, drinks obviously won’t be an issue.

There you have it: our roundup of 14 unforgettable experiences in Australia. What’s your favourite adventure?